Commentariat(tm) member invivoMark made a plug for this game, and I am very glad they did. [stderr] [This review/extended comment does not include spoilers.]

This game is wonderful and quirky; it’s charming and incredibly clever. If you’re a certain kind of person (I will get to that) you’ll love this game and I recommend you give it a chance.

Anna and I have been playing as a team; she’s the pilot and does all the difficult maneuvering and running about. I watch and kibitz – sometimes I even have useful suggestions. Between the two of us, we can figure out where we are supposed to go and what we are supposed to do, most of the time. 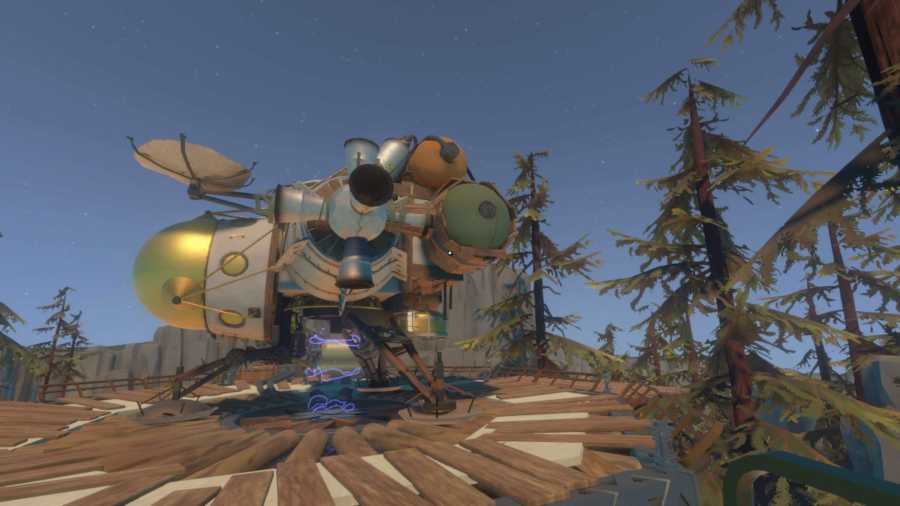 The game is a mystery wrapped up in a puzzle with an exploration bent. Your character is a goofy-looking member of a rather odd species, which live on a small goofy-looking little planet, in a small goofy-looking valley. A rickety wooden gantry supports a ‘rocket’ ship that appears to be held together with nails and duct tape. Everyone in the valley is cheerfully lackadaisical – we quickly learn that we’re the latest in a short line of explorers that have launched forth and … gone camping. Sort of. I don’t want to do any spoilers.

A central element of the game is that you’re trapped in a sort of Groundhog Day loop, except you’re not doing the same thing over and over, exactly. Each loop is an opportunity to explore more and learn – there’s a central mystery that you and your fellow explorers are trying to pick apart. Well, you are. Your fellow explorers seem to be pretty comfortable finding a spot, building a camp fire, and playing banjo, or harmonica, or whatever. When you talk to them, they dispense almost entirely useless information. In fact, you’re on your own trying to assemble all the ideas in this complex and mysterious set of events. Because of the groundhog day effect, you get to experience some of those events over and over, while you figure out the correct timing and sequence in which things need to be done to unlock more mysteries.

There’s a mystery that is complicated, beautiful, and at times a bit sad. The scripting is all very understated, like your fellow explorers, it kind of sits there waiting for you to figure out what to do, and it doesn’t need to leap forth and whack you about the head and shoulders with plot devices. 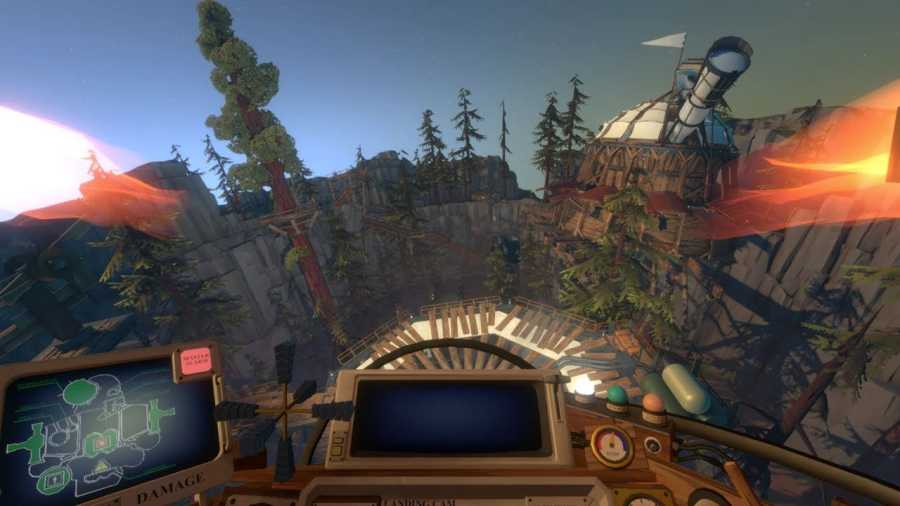 Blasting off on another mission: certain death awaits with sharp pointy teeth

If you remember back in the early days of gaming, there was a game called Myst. It was a puzzle game about a mystery, and The Outer Wilds has sort of the same feeling except with space exploration and dynamic rendering. If you liked Myst, though, you will almost certainly like The Outer Wilds.

There’s some tricky flying and some impressive timed runs. There are platformer areas where you’re leaping about using the thrusters of your space suit to navigate while your air runs out. [I don’t consider that a spoiler: every space game I have ever played leans on the “and then your air runs out” trope so I assume it’s in any given game] There are a few bits that made me gape in sheer wonder. It takes a lot of courage from a game designer to do something like this, because I don’t think it’s got the kind of broad appeal you expect in a big-market offering. This was written by someone smart and quirky and a bit odd, for people who are smart and quirky and a bit odd.

In fact, the writing is quite a mystery; I don’t know how many times Anna and I just sat there staring at eachother going, “how did they write this?” There are so many odd ideas – even grand ideas – wrapped up in this game that it seems like a profligate expenditure of creativity.

I always want to reward creativity in game design, because I’m sick to death of crank-turning mega-games that offer more complex but pointless game-play [Hideo Kojima, I am looking at you] Like The Sexy Brutale and Disco Elysium this game feels pared-back to just what matters but it’s not afraid to give you frustratingly hard problems to solve, because they are not pointless.

We think we are close to the end, and are still enjoying it a great deal. This is a good game for playing cooperatively – it would be a good family game for an introduction to team play. It’s on Xbox, Playstation, and Windows.

If I were to search for something negative to say about the game, I’d say it doesn’t have a lot of replay value. In fact, the game is a loop of replays already; once you know the mystery, you’re done with it. Given the relatively poor replay value of many big-market games, I don’t consider that a mark against it.

The Outer Wilds is one of the most interesting games I’ve played in my gaming career.

For the last few weeks I have been obsessively playing Rimworld – a rogue-ish survival colonization game with the central conceit being that an AI crafts plotlines to make things interesting. I’m unconvinced that the AI is anything brilliant, because the same elements keep recurring, but the gameplay is weird, addictive, and it’s like diving into a sea of frustration.

A Thing To Do While You’re Shut In: Coloring Cthulhu » « Depressing Reading