Lately, I’ve been playing The Outer Worlds and enjoying it a great deal. It’s the essence of a first-person role-play shooter. It’s also got great design elements, a certain hipsterish wry humor, and it feels slightly soulless.

But I’m actually not here to talk about The Outer Worlds. It’s good stuff but it’s not amazing. What I’d like to do, instead, is throw my hat into the ring with another highly favorable review of Disco Elysium. I have not actually been playing the game myself, I’ve been watching over Anna’s shoulder, making annoying suggestions and analyzing what’s going on. I feel that observing someone interact with a game is a pretty meta- way of seeing it and being entertained. Like with The Sexy Brutale [stderr] it’s a small production studio working on a budget, not a great big AAA-rated game that is going to succeed whether it’s good or not, simply because of the economies of scale from bundling.

Disco Elysium has been making a lot of waves and getting good reviews because – ta da! – it earned them. It’s fascinating, fun, cool, and wildly creative. It’s also weird and beautiful and melodic, groovy and surrealistic. The action begins, as many great movies do: you wake up in a bed, and you’re still in Saigon. Oh, wait, no, that’s Apocalypse Now – you’re in Revachol; a sort of down-beat scandinavian-sounding vaguely European place that is run-down, hung up, and – like your character – seems like it’s waking up from a black-out bender. Your character is a complete blank, and we slowly discover a lot of things about them; the game is as much about creating your character our of bits and pieces as it is about solving a big mystery. There are little mysteries, like “is that a cop car upside down in the ice?” and other mysteries like, “hey, I’m a cop, aren’t I supposed to have a car?” Your job is to put them together. 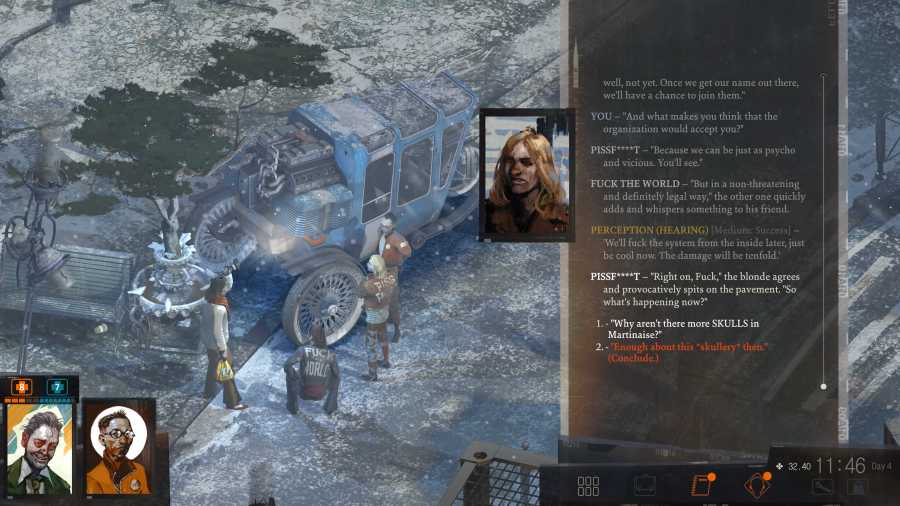 If you are my age, you perhaps played Gabriel Knight (with the amazing voice acting by Tim Curry) and, if you remember that game well, you’re a candidate to enjoy Disco Elysium. The interface is the same: you wander around beautifully painted maps, and talk to weird people. It doesn’t take you long to realize that you’re the weirdest person in the game. It’s all dialogue options, and there’s a lot of surreal wryness in those, as well. In the scene above, you, the cop, are talking to some punk rockers about gang activity. At one point in the dialogue tree you have the option to try to scare the punks into “giving” you their jackets. Then, you roll ‘dice’ and, if you’re lucky, you wind up with some nice biker jackets. It’s weird to be a cop and be going around shaking down punks, but that’s par for the course for a game that starts the way it does. 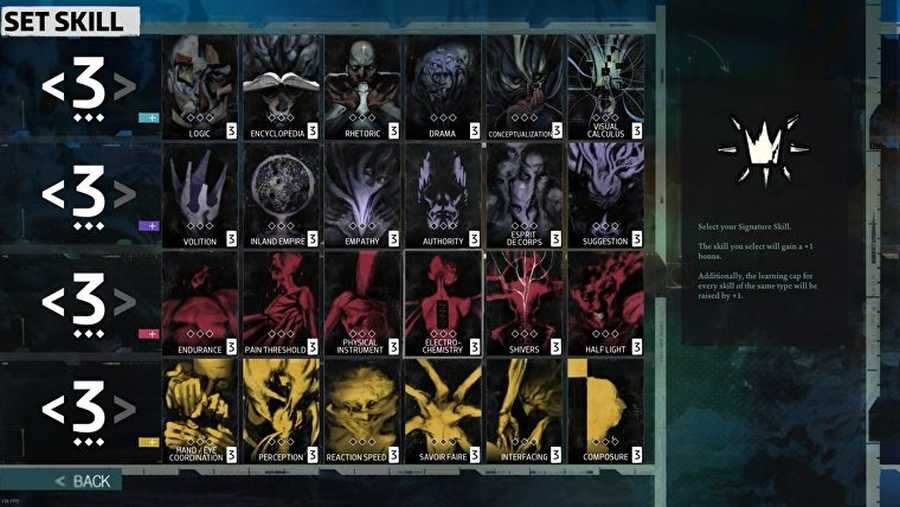 There are three distinctive things about the game: First off, the dialogues are huge and change dramatically depending on what’s going on and what you have or don’t have in your inventory. The scripting is great and weird and sometimes a bit pretentious, other times laugh out loud funny. Secondly, the character you generate is the game. You’ve got these complex skill trees that are used to navigate dialogue options. If you’ve got a high savoire faire stat, you may be able to talk the punks into giving you their jackets. Lastly, the way items are managed is downright brilliant. You may equip your best looking bell-bottoms to boost your savoire faire for a critical roll, then pull on a hipster barista hat to complete the look and boost your perception stat. It almost feels like you’re playing with a paper doll, sometimes. 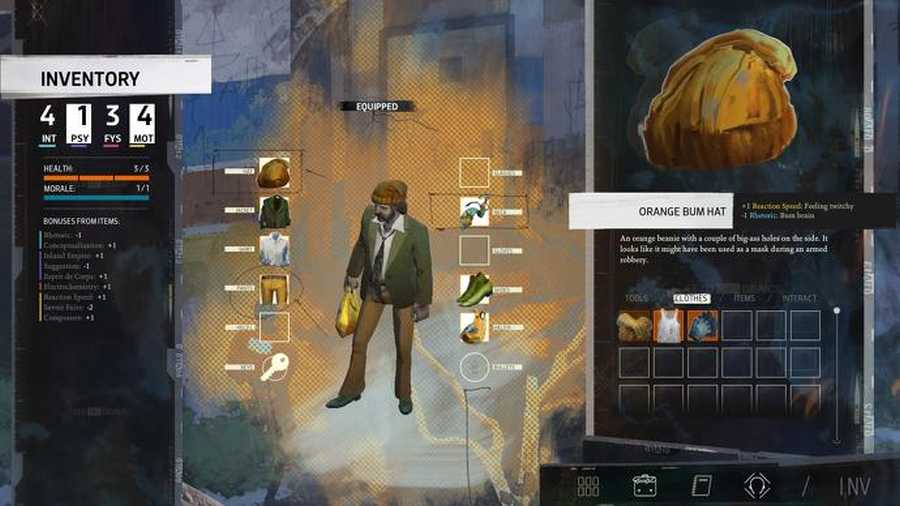 The art is gorgeous and the sound design is cool and understated. The voice-overs are spotty – sometimes they are pretty cheesy; Revachol is not a real place and has no real regional accent, so it sounds as though the voice-overs were done by drama students trying to synthesize a “sort of French accent.”

Another thing I love about the game is its visual spareness. Like Gabriel Knight, the whole game takes place on a set of mattes that are a painting. So your animated character is running and rummaging around in this great big painting, with a sort of eastern european light painting effect. It’s very clever and it avoids having a lot of visual splash and 3D rendering. The landscape of Revachol looks vaguely reminiscent of something from Simon Stalenhag [ss] I’m biased: I have a stack of books by Stalenhag on my shelf; I love that sort of pastel high-detail but impressionist look. Wandering around the maps is fun in itself and I kept gasping in happy surprise.

There are more detailed reviews than this; I don’t need to go into the gameplay and plot. This is a wildly creative game and if you’re a bit of a surrealist, I recommend you give it a shot. I’m tired of crank-turning AAA titles that basically suck, and I’m happy to find something unusual and quirky like this.

When I say “eastern european light painting” I am thinking of Enki Bilal, or the artwork from Scythe. There is this kind of palette that Bilal used which made his work dark and gritty and beautiful. I do not know how that works.

Weird Symmetries » « A Gift That Keeps On Giving