As Dan Geer once said, “We all have limited time; thank you for yours.”

I’ve been doing this for a year, now. It’s been a big shift for me; for the last decade I’ve mostly fired off heavy broadsides after thinking about and researching my topic for months or years. Blogging like this has required writing more, faster, and relying less on research and more on memory.

When I started off, I said: [stderr] that I’d be focusing on:

Some of the names have changed a bit and I appear to have steered away from moral nihilism (it’s hard to argue in favor of a non-position) As I’ve proceeded during the last year, I tackled the topics that interested me, and which I had time to attack fairly, so there have been a few things, such as recapitulating Robert Paul Wolff’s arguments on anarchism, that I’ve found exceedingly tough going – I don’t want to damage someone else’s argument by not presenting it as well and fairly as I can.

One of the questions I have always been concerned with is “what is ‘success’?” which, of course, only makes sense in context. What am I trying to do, that I may measure success or failure against? Going into this, I had fairly little expectation except “let’s see what happens” so I’ve had the advantage of not having a great investment in a specific agenda; I’ve approached this more like I’m having a dinner conversation with guests. Most of those guests, I owe the automatic courtesy of a host, and I’ve tried to reflect that in my responses – that’s also been a great learning experience for me.

It took longer than I expected to collect some basic statistics about activity here. I started off by making a google docs survey form, which I then filled out for each of the postings in the 29 pages of postings. At the time of this writing, that was a total of 520 entries. If I were going to do this more often, I’d be more careful with my tagging scheme in my postings, and would extract the data directly from WordPress. As it was, I spent 3 hours watching a movie and entering data. (the screenshot says 519 but that’s because I made it earlier) 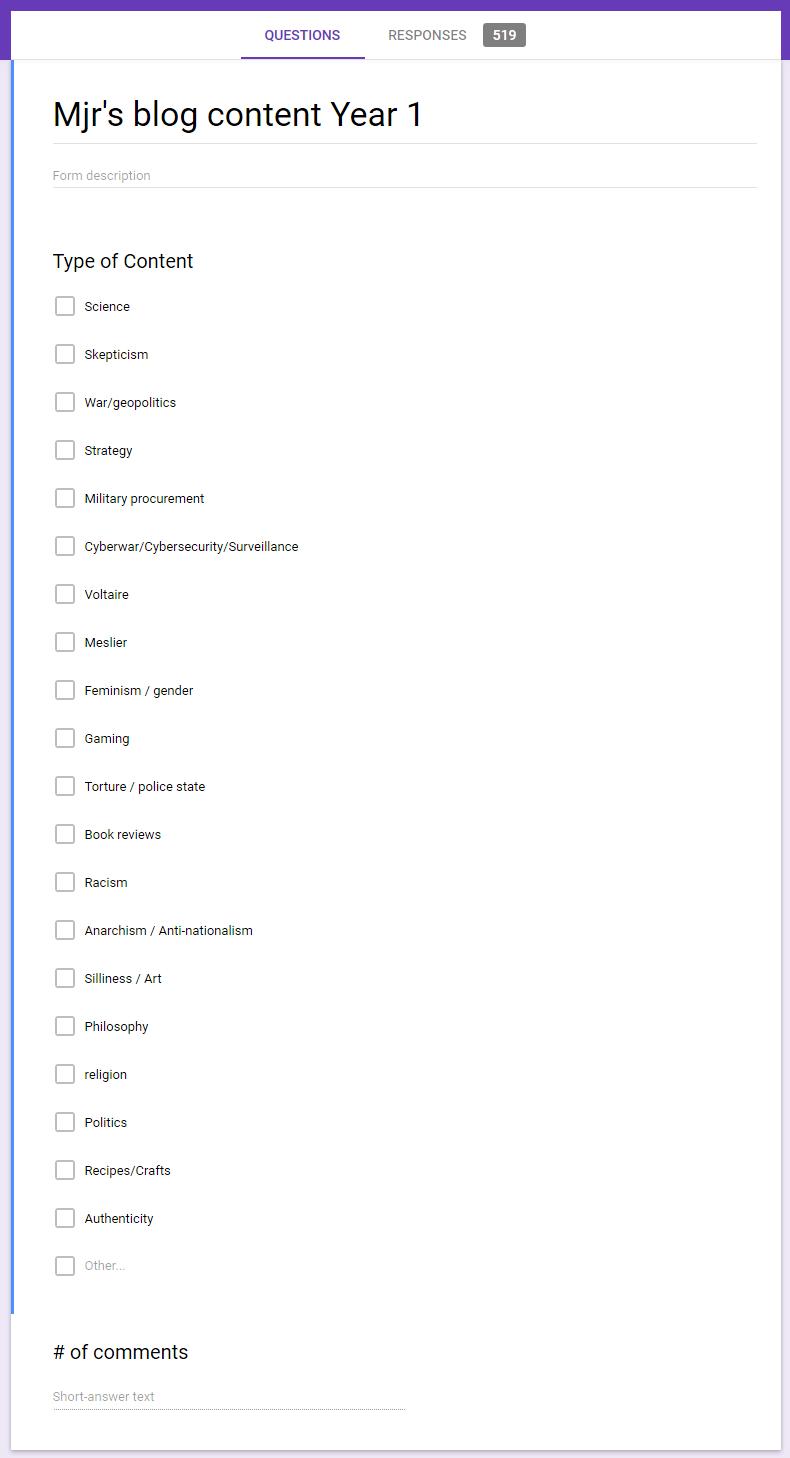 The google docs forms are pretty convenient; you can have the response feed straight into a ‘sheets’ spreadsheet, and the do a pivot table with summaries from that. So, I took the total number of postings according to my categories above, and produced the following chart: 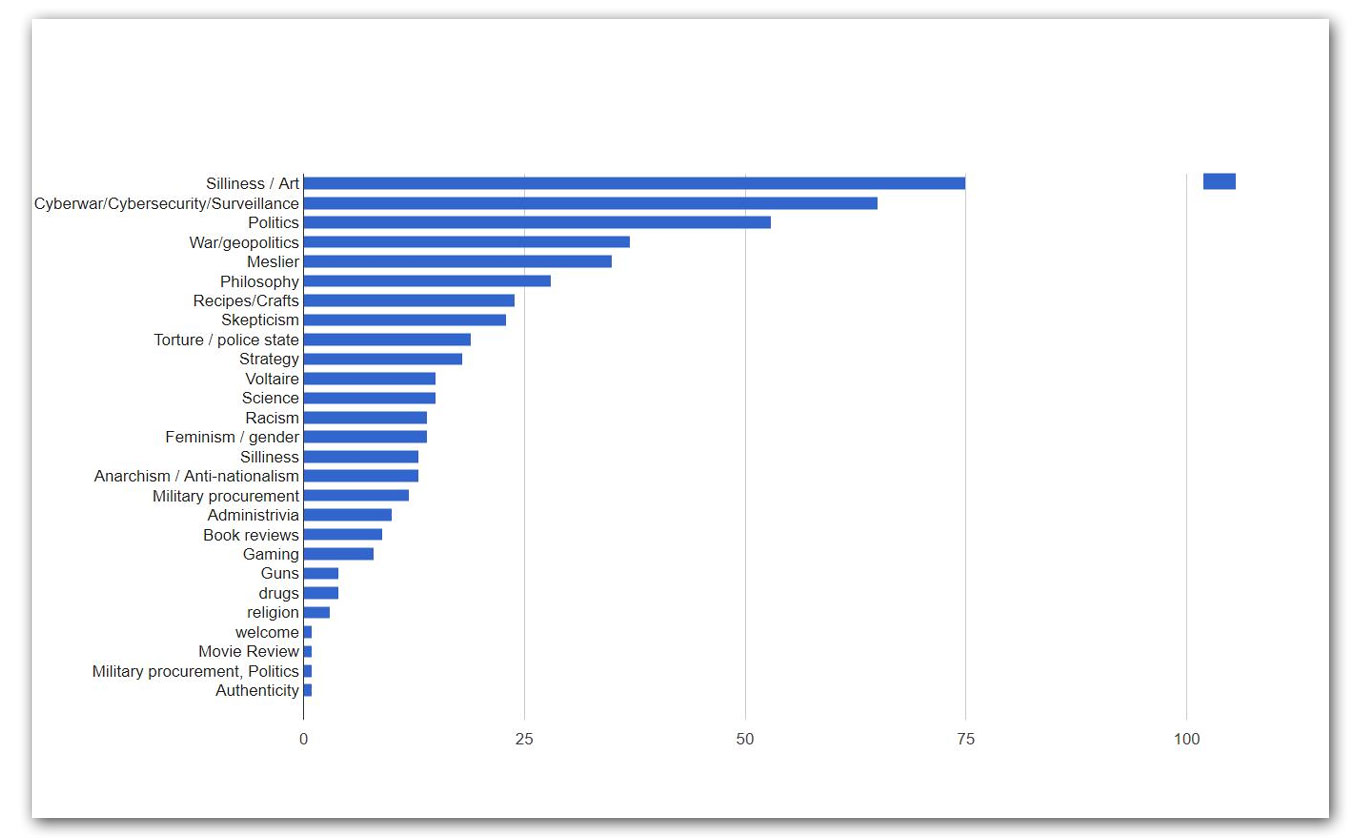 This also illustrates a typical problem with survey-building: if you get your classification scheme slightly off, it’s painful to go back and fix it. My experience has usually been that you build your survey, run your totals, then rebuild your survey and re-measure it. That, of course, leads to huge epistemological problems if you’re a social scientist, because you’ve just cooked your inputs to match your outputs, but in the case of a bunch of “here are some stats about my blog” it wasn’t worth worrying about.

The category “Silliness/Art” dominated with 75 postings, but the next runner-up “Cyberwar/cybersecurity/surveillance” weighed in with 65 postings. If I were doing it all over again, I would have broken “Silliness/Art” into “Photography”, “Randomness”, “Other People’s Art” and “My Art” – as you can imagine, that would significantly change the chart; Cyberwar and Politics would dominate.

I don’t count success in terms of my output, though. Considering this blog as a dinner-table conversation (ideally a suitably lubricated one!) I would consider a greater measure of success to be that we’d had an interesting conversation. We would learn from eachother and stimulate eachother and – consequently, I consider some notable successes in this year to be that: I appear to have convinced at least one of you to make soap (!) and I’ve seen some other comments that indicate that perhaps a few of you have tried my recipes. Further, I’ve seen comments that indicate that some of you have taken a few of my book recommendations, and – in return – I greatly enjoyed the Fred Vargas books Caine suggested, and have been very slowly making my way through Stephen D’Arcy and Peter Gelderloos’ books on political violence, which have forced me to re-approach Rousseau and Paine in a darker light. I’ve also had to “brush up” on my facts by re-reading monumental stacks of writing by Voltaire, and writing about Voltaire, as well as a ton of war history most particularly Halberstam and Sheehan on Vietnam and Woodward on Obama, Bush, Iraq and Afghanistan. Normally I live surrounded by stacks of books; blogging has made that much worse: now I find myself reading truly wretched garbage, in order to discuss it from direct experience. So I’ve had to go back and review a ton of material about psychology (which I had hoped to be able to forget) as well as IQ testing, testing and measurement methodologies, and pseudosciences like eugenics and its cousin evolutionary psychology. Having to study all this stimulating new stuff has been a great success – otherwise I probably would have just had my head down in the coal mines of information security, writing yet another bunch of articles about introductory security stuff for people who don’t care.

How do I measure whether you care? That’s the other question that defines “success” for me. Well, you have not been collectively sitting back and listening to me blathering. There’s a solid cadre who appear to read this blog regularly.

The most popular posting appears to have been my “some things about Hillary Clinton’s email server” [stderr] – which was a deliberately clickbaity title – that I tweeted on my information security twitter account. That garnered some attention but it didn’t result in a lot of return readers (which is fine) My posting on the massive ransomware outbreak [stderr] got syndicated on another website and picked up by the security community, so there was a large silent readership for that one.

I don’t consider sheer readership to be my measure of success. I don’t consider “clicks” a measure of success, either. When you’re trying to decide if you’ve been a good host for a dinner party it’s not a simple matter of how many guests, or how much champagne was consumed. Here’s another metric that’s interesting (though mildly bogus because it’s highly dependent on my subjective classification scheme on my survey) 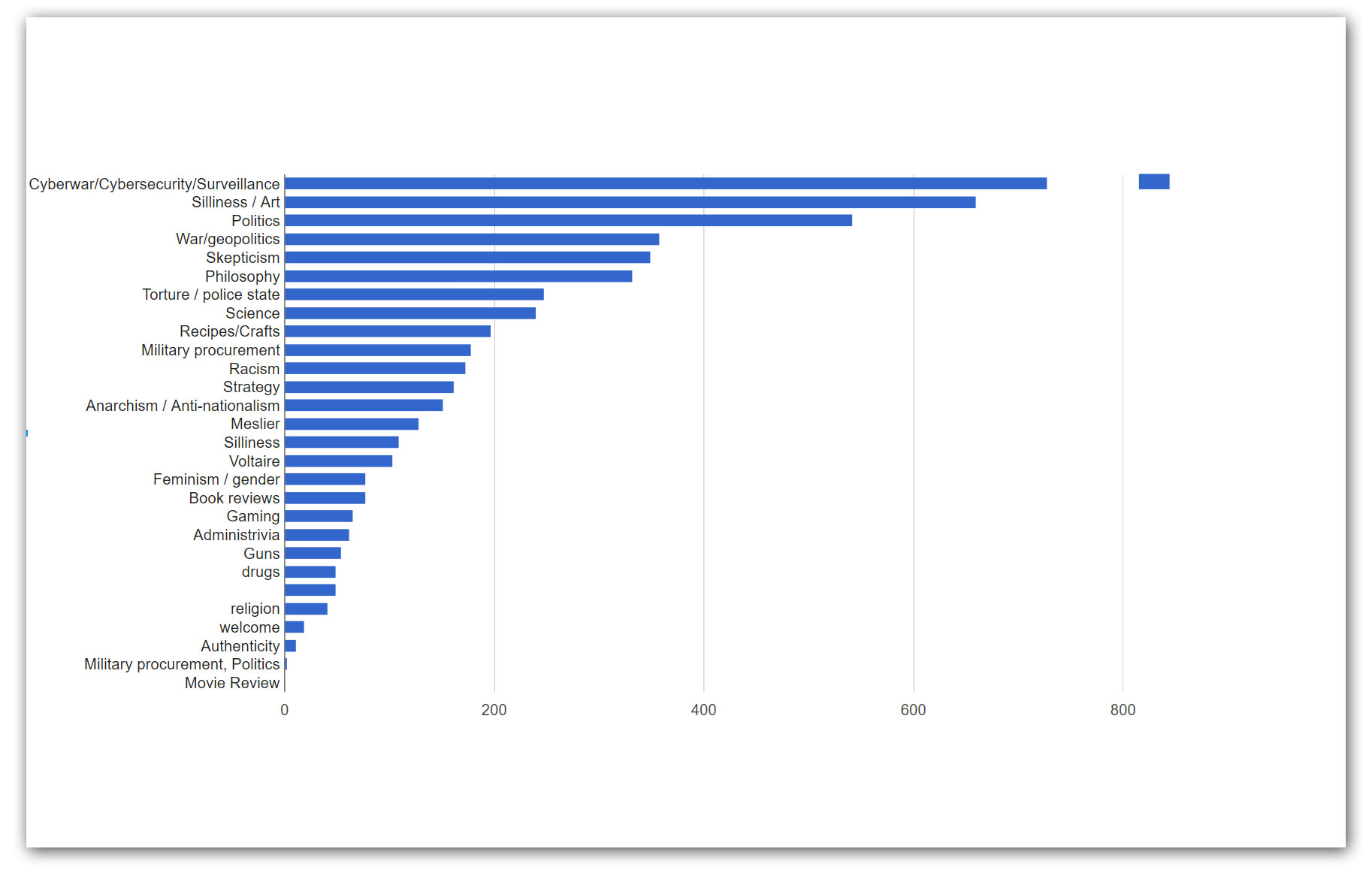 The commenting level includes my comments (1,859 of them, at this count) – but perhaps we can treat commenting level as some kind of proxy for interest in the topic. I find all the topics to be interesting, or I wouldn’t have posted them, but we’ve collectively interacted the most on the topics where I’d say there’s room for discussion. I think I’d be a bit worried if there were topics that got no interest at all, because that would be like serving the guests at my dinner party some delicious baloney curry ice cream for dessert – a clear and painful “miss” when they all remain untouched next to everyone’s place setting.

I like the metaphor of a blog as a sort of dinner party. Some of the other blogs where I hang out, such as John Scalzi’s Whatever or Charles Stross’ Diary, can get mighty crowded at times. I don’t think it’s better or worse, it’s just different, but you can tell John and Charles both have a more ‘hands off’ style with their guests; there’s just too much going on to keep track of. “Smaller is better” isn’t quite right; perhaps “vive la difference!” is more like it. There are going to be places that are a great bustle and rough-and-tumble and others that aren’t. I was prepared for either, so it wasn’t possible for me to be disappointed or surprised.

I thought about posting some sort of google docs survey with a set of optional topics for discussion in the next year, but I didn’t because that’s a party-killer. If you ever want to murder a party, wait until there’s a quiet moment and ask loudly, “So, what shall we talk about?”

Thank you all for being here, and for being interesting and thought-provoking. Most of all, thank you for your time!