I know it’s all the fashion, in some circles, to belittle the “mainstream media” for being hard on Donald Trump – but I think the media ought to be more direct and less cautious in its wording.

One notorious example is the New York Times adopting the Bush administration’s fig-leaf terminology for torture, and calling it “enhanced interrogation.” That unfortunate choice of words helped the administration muddy the waters, and helped the Obama administration white-wash them. It’s like when the media adopted the Clinton administration’s fig-leaf terminology “ethnic cleansing” instead of “genocide” in order to help them avoid triggering the UN Convention on Genocide, which requires signatories to take positive action when genocide is seen to be done. So, the Clinton administration looked at what was happening in Rwanda and called it “ethnic cleansing” – and the media went along with it. It wasn’t the Rwandans who were calling it that; it was the civilized world, who had declared “never again” after the nazis. “Never again” and a couple bucks’ll get you a latte’ at the Starbucks in the lobby of The Times.

I know it’s sad that reporting is going to suffer as the media continues to die, strangled financially by the internet – but, screw them: they had their chance. We are stuck with an incoherent, lying, wind-bag in part thanks to their soft-pedalling what should have been a strong critique all along. They should have been “telling it like it is.”

If there is one thing that authoritarian media should have taught, it’s that the press does not need to avoid editorializing. I happen to think that’s part of why the media are dying: they fail to make a principled stand (and to explain why they have principles) which leaves the unprincipled foe with all the maneuvering-power on the battlefield of ideas.

So, here’s the BBC doing it: (emphasis mine) [bbc]

President Recep Tayyip Erdogan, whose ruling AK Party is rooted in conservative Islam, has denied wanting to impose traditional religious values, saying he is committed to secularism. But he supports Turks’ right to express their religion more openly.

He has been accused of growing authoritarianism in recent years.

This is the third year in a row that Turkey’s largest city has banned the Gay Pride rally.

No, that is bullshit, BBC. He is an authoritarian, and he is setting himself up as a dictator. Soft-pedalling language like The BBCs helps him get away with it. Doubtless there are some saps, somewhere, who read that and thought, “Oh dear, The Beeb seems to think Erdogan may be a problem some day. Oh, my.”

They did not “ban” the Gay Pride rally: they “suppressed” it. First, yes, they banned it, but then they used rubber bullets to disperse the marchers, and arrested a lot of them.

Police in the Turkish city of Istanbul have thwarted attempts by organisers to hold a banned Gay Pride march.

No, BBC, you authoritarian-enabling mouthpieces for dictatorship – shooting people with rubber bullets is not “thwarting” someone. It’s not even “stifling” them, unless that’s a new euphemism for waterboarding that I haven’t run across yet. For one thing, it’s potentially life-threatening violence: if you get hit in an eye or your throat, rubber bullets can kill, blind, or cripple. The Turkish police used tear gas, high pressure hoses, and plastic bullets fired from some kind of paintball-like gun. 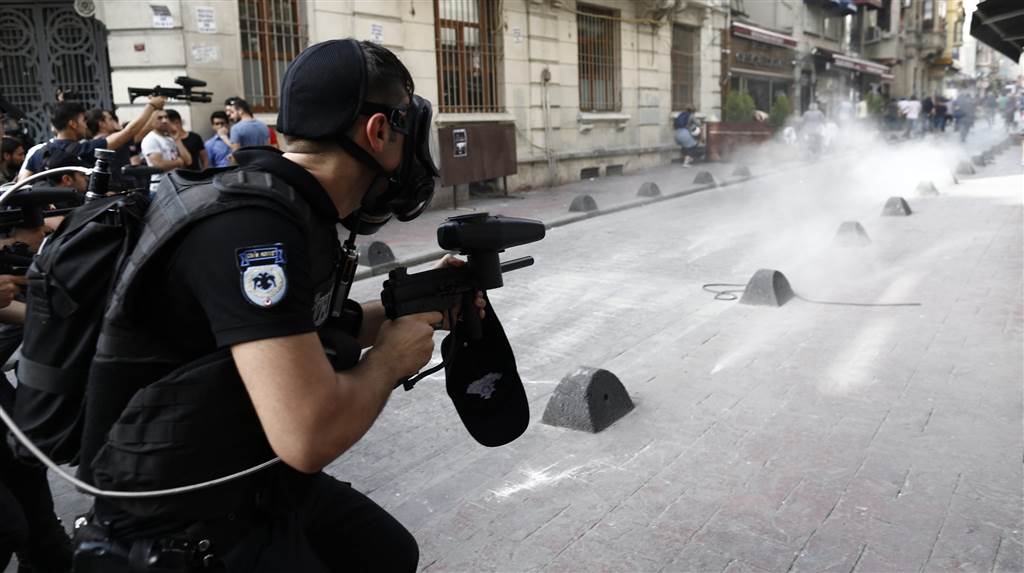 This is not “thwarting” a march. [source]

The pig with the gun (I’m going to switch to 60’s terminology for the police) has a high pressure tank on his back, and the gun looks like it’s using some standard paintball components, like the top-feeder. A little googling around and you can learn a lot more about the kind of plastic bullets the Turks are using to “thwart” the marchers. And it’s nasty stuff, sold by nasty people to nasty people. [source] 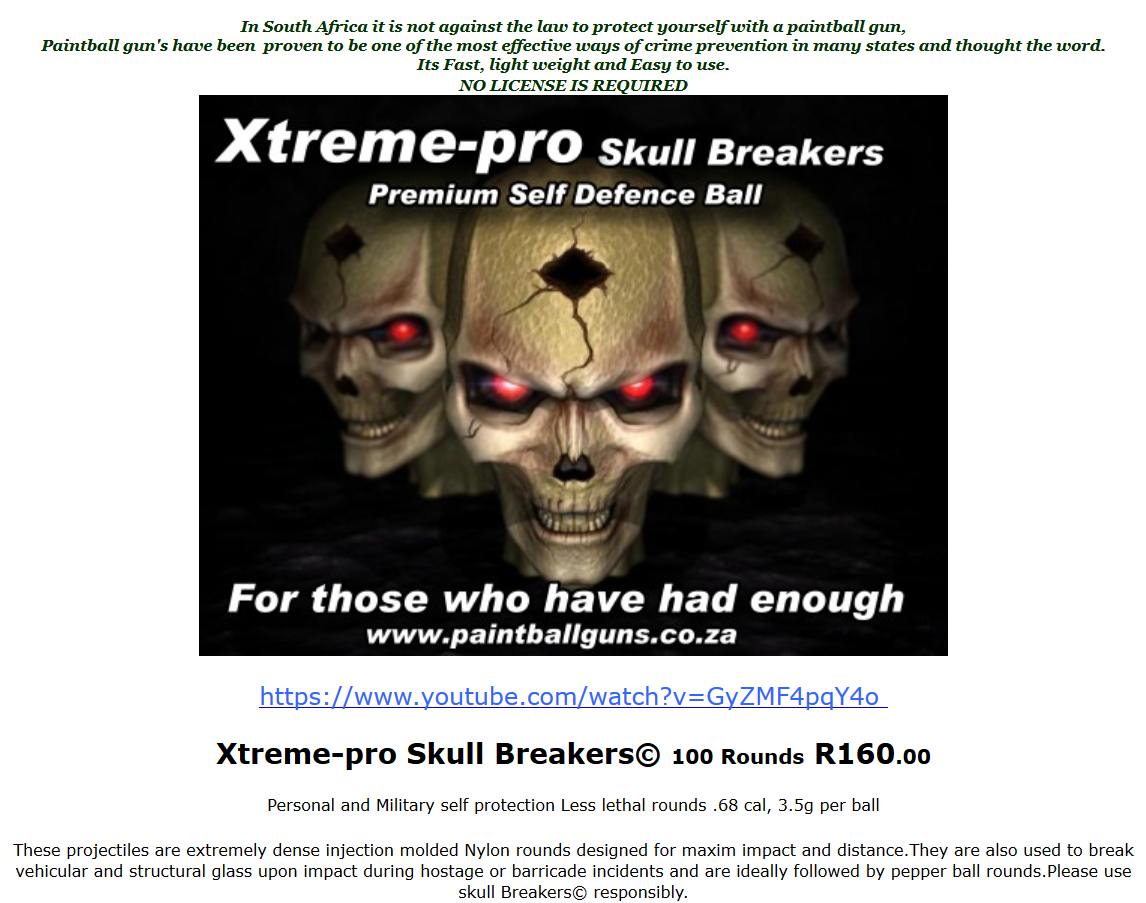 “They are also used to break vehicular and structural glass upon impact … and are ideally followed by pepper ball rounds.” Something that can break a car window can blow out your eye, knock out a tooth, choke you. Have you ever been shot with a paintball and been hit on an unarmored area? These are basically paintballs except they are solid. You’ve also got to appreciate the marketing genius of calling them “skull breakers” – that just screams safe and non-lethal doesn’t it?

The site even has helpful pictures of the kind of bruises these things leave: 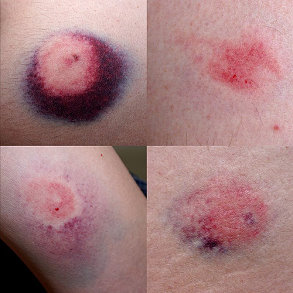 The guns are made by Tippmann, of Ft Wayne Indiana. USA! Their website says: “Tippmann has a marker for every style of play” but for some reason they mostly seem to be focusing on promoting paintball as a fun sport.

If anyone shoots me or mine with something like that, I will respond with 7.62x51mm HPBT or worse. When I was in basic training, I had to take a couple deep breaths of CS gas; the same applies. I think the only way a cop can spray someone in the face with CS gas and survive is if the recipient is unarmed, or doesn’t know what’s coming at them. Because anyone who knows what’s about to happen is going to “stifle” a hole right through that pig, if they’re geared for it. Remember, it takes good guys with guns to ‘thwart’ bad guys with guns.

The Turkey situation, however, is just fucked up. How is the media continuing to report about Erdogan like he’s a semi-normal politician who’s just maybe a bit authoritarian? I remember the soft meepings from the press when Putin made himself dictator of Russia – same thing, “Oh, my. He’s getting a bit authoritarian…” and then some buildings were blown up using Russian military hexanitro explosive, and Putin suddenly was there to clamp down, thwart, and suppress terrorists. [wikipedia] And the media didn’t complain a whole lot because he “thwarted” some of them into morgues. 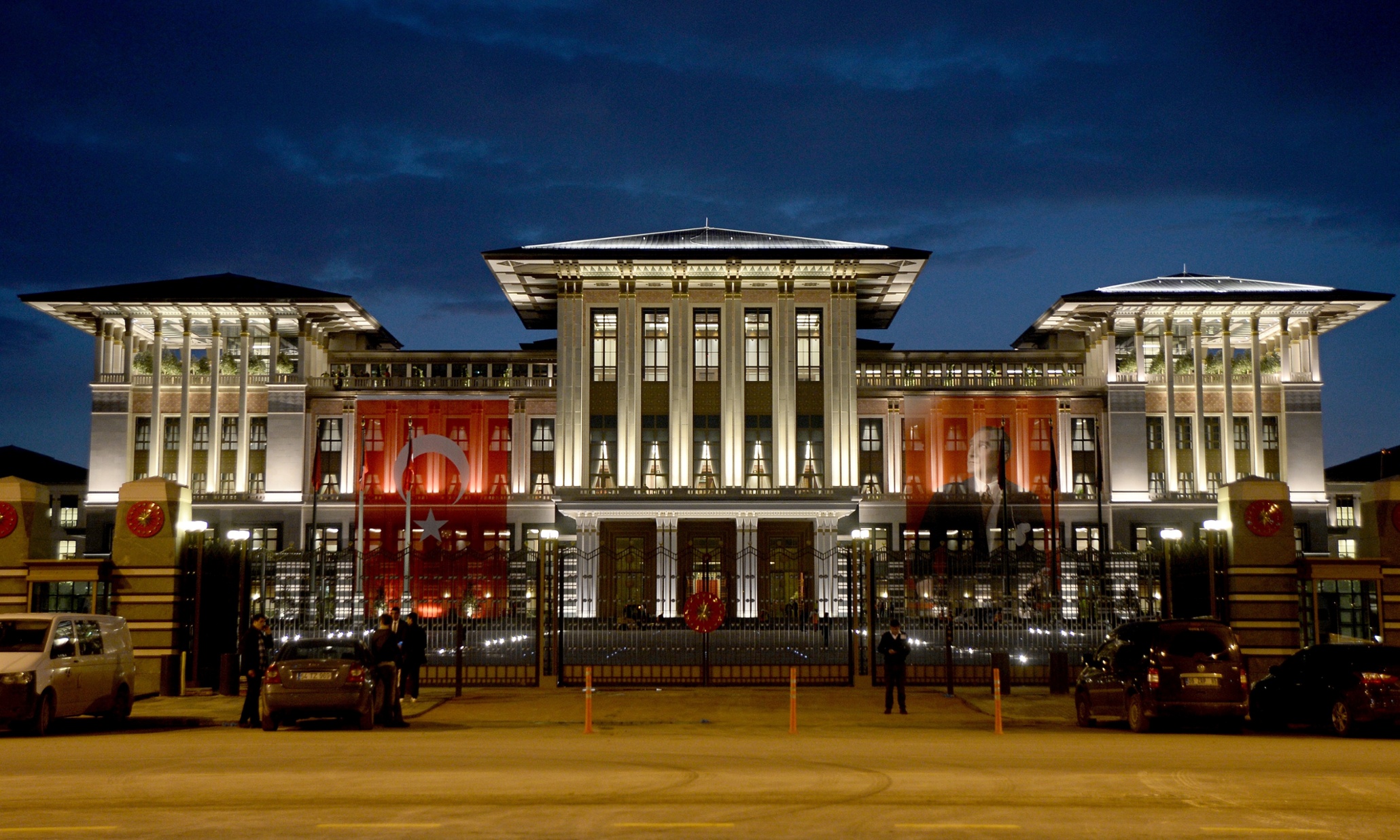 $7b buys a nice house

That is Erdogan’s $7b residential palace, paid for by the taxpayers of Turkey. Saddam Hussein would be envious. Saddam Hussein would also envy the nuclear weapons the US has proliferated to Turkey. There’s some kind of horrible, black irony there, but I don’t even want to decant it and sniff at it: you know it’s deeply rotten.

The US isn’t going to stop supporting Erdogan, because he’s a useful dictator, and the US has always preferred a useful dictator to a messy democracy; they have a tendency to do things like vote to ask you to leave.

This is not going to end well.

It seems like everyone’s got a “cop problem” these days.

Don’t forget, the US still apparently has 50 or so MK-61 variable-yield H bombs stored at Incirlik air force base. I have heard unsubstantiated stories that in situations similar to the attempted coup d’etat in Turkey, the custodians of the bombs can render them inert by cutting the trigger-harness off at the physics package. But that’s only temporary. The US is hopping up and down about Iran’s alleged and North Korea’s modest nuclear ambitions, and they forward-deployed 50 pick-of-the-litter H bombs to Turkey. Thank god they’re not muslims there, or there would be hell to pay!

Ever since I was a kid I’ve had an idiot savant-like ability to recognize weapons. Seriously, I can tell a sword by Assad Ullah from across the room. It makes it painful to go to something like Star Wars and go “why are they shooting laser bolts out of a WWII German MG-34?” or ALIENS and “Hey, that’s an MG-42!” Or worse, the scene in one of those wretched Indiana Jones movies where he points a Lanchester/Sterling 9mm at the Ark of the Covenant, when Sterlings hadn’t been invented, yet. I just hate that crap. So, of course, I google image-searched “Tippman paint ball gun” and in about 3 seconds I recognized the “Tippmann A5 Response Trigger Paintball” gun that the Turkish pig is using on the unarmed civilians. You can get direct from Tippmann for $249.95, [tippmann] if you want to play paintball with a pig. But I recommend you go with a high-powered rifle if you’re going to do that.

The Brits have really been gearing up with the rubber bullets, too. [independent] The Independent points out that the Brits were fond of the rubber bullets and baton rounds in Ireland, neglecting to mention that they also shot 28 unarmed civilians with 7.62NATO ball on bloody sunday in 1972 [sunday]

I’m not gonna ask anyone for a retweet, but… 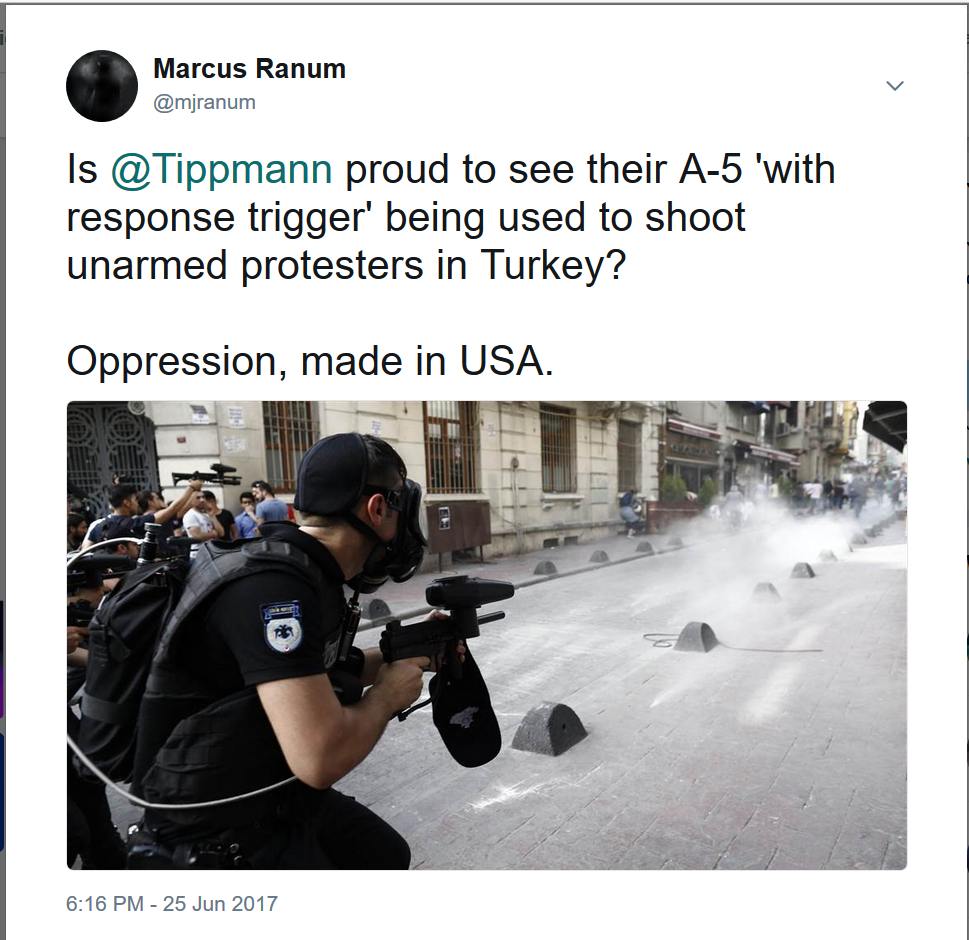 PS – yes, I know in Star Wars that Leia’s pistol is a broomhandle Mauser. And Chewie has a Barnett Commando Crossbow. And blasters are built around a Sterling 9mm submachine gun. George Lucas sucks. At least they could have made up some weapons that outright wouldn’t work like the weird mannlicher-style bolt action semiautomatic blaster in Blade Runner. It’s parts from the junk-box but at least it’s not a WWII weapon with some nurnies stuck on it!  (OK, now, see what I did there? I didn’t look up that it was a mannlicher bolt on the Blade Runner gun, I just knew that off the top of my head. And the bottom’s a Walker Bulldog – that gun is a victorian British military piece with a victorian German hunting rifle glued on top of it. C’mon, Hollywood!)  I appreciate games like Halo and Mass Effect where they at least try to devise plausible looking and operating weapons.