To get to Lavecon, I took the midlands train from London/Euston up toward Birmingham, and got off at Northampton. On the way up, I went past Bletchley, the home of Bletchley Park – where the British code-breakers (including Alan Turing) worked during WWII.

Lavecon was kind of small, and hot, and after the first day I was ready to move on. So I had breakfast, checked out of the hotel, and walked to the train station. Unfortunately the railway line was down so we were all loaded onto a bus that (judging by the smell) had non-working air conditioning and a leaky loo. I travel a great deal and have developed a technique of putting myself into a light trance, which makes time and discomfort simply disappear. An hour or so later, I was at Milton Keynes, then on the train quay in the sweet fresh air, for a 10 minute train ride to Bletchley. The Park is only a few hundred yards from the station, so I slouched off down the road. 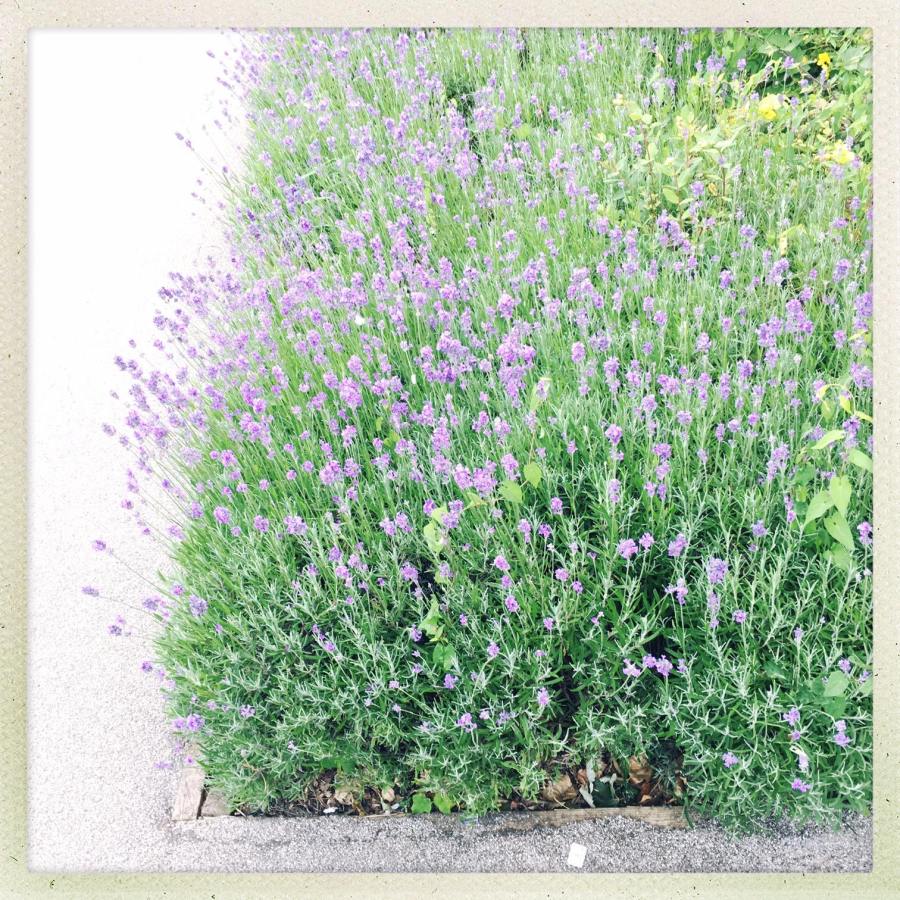 Lavender is one of my favorite scents, so I stopped to stick a couple blossoms into my Fuel Rats ball cap. 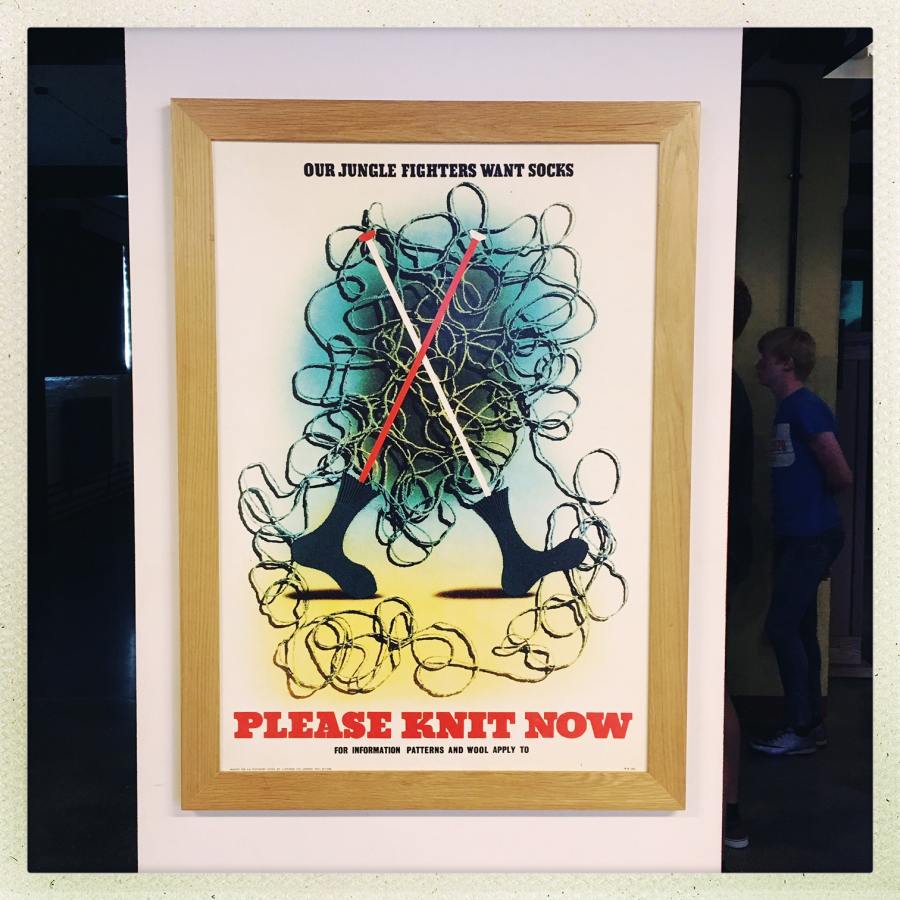 WWII-era stuff seems incredibly distant to me, but it’s really only a few decades before I was born. I suppose that’s a side effect of changing times, pictures of New York in the 60s look “vintage” yet familiar, but Britain in the war was pretty stripped down. The amenities at the welcome station were all very WWII-looking, though new. It wasn’t “Hollywood new” like we’d have in the US – foamed urethane prop-doors; everything was real wood though the paint was in muted pre-faded colors. The helpful fellow at the front desk was desperate to give me a discount, and asked it I was a senior citizen (I growled a bit) and then a veteran. “Uh, yes.”  He brightly said, “Well, then, that’s 20% off! Thank you for your service!” I told him my service was not satisfactory to anyone, though I did have an honorable, at which he looked quizzical, stopped trying to be appreciative, and let me in.

The poster of the “knitting needed” reminded me of a bit in a George MacDonald Fraser book (I am pretty sure it’s Quartered Safe Out Here, which is on my recommended reading list[stderr]) Apparently the “get the knitting out” campaign was good for morale but produced some truly terrible socks. Imagine some highlanders in Burma slogging about in the jungle in hand-knit socks that have irregular tension in the stitches. It’s exactly the sort of thing Fraser remembered and wrote about, vividly. 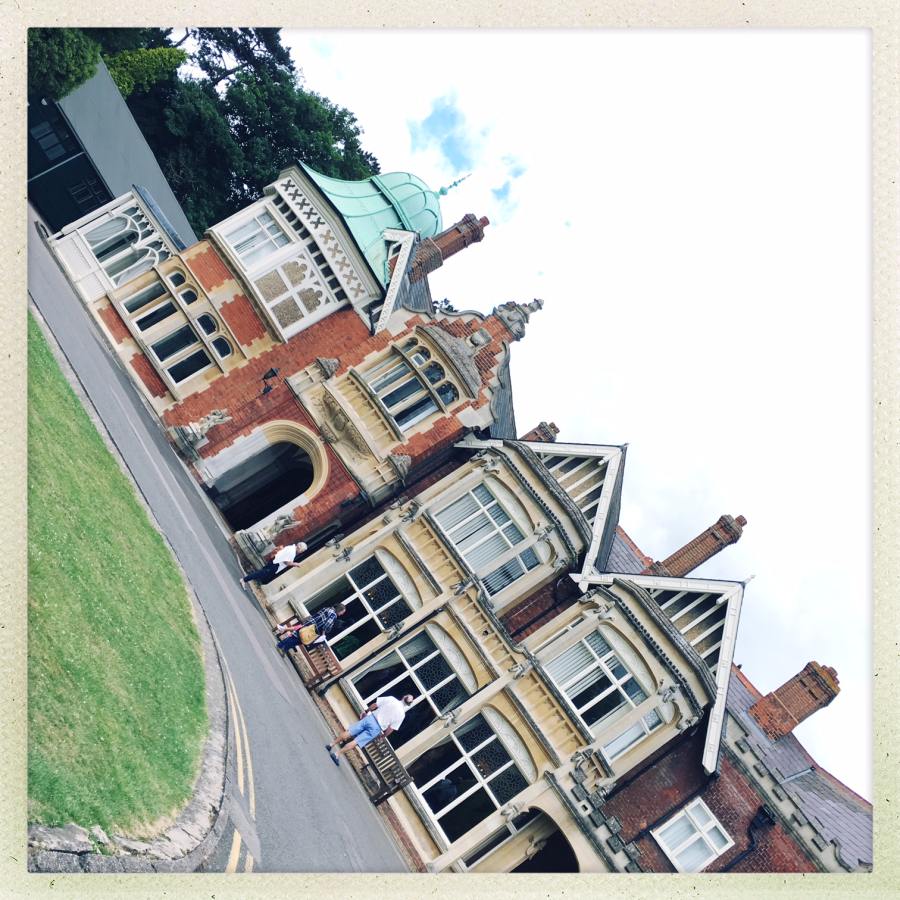 The site is breathtakingly quaint; there’s a pond with swans, a croquet field, bicycle racks, lawn chairs – and the main building is a Lovecraftian architectural horror that is so wrong it flips the dial around to “not so bad.”  The museumy bits are a mix of “sons et lumieres” projected on walls and screens, consisting of interviews with people who worked there, and there are a lot of reconstructed spaces that do look like the codebreakers just left off what they were doing for a while. 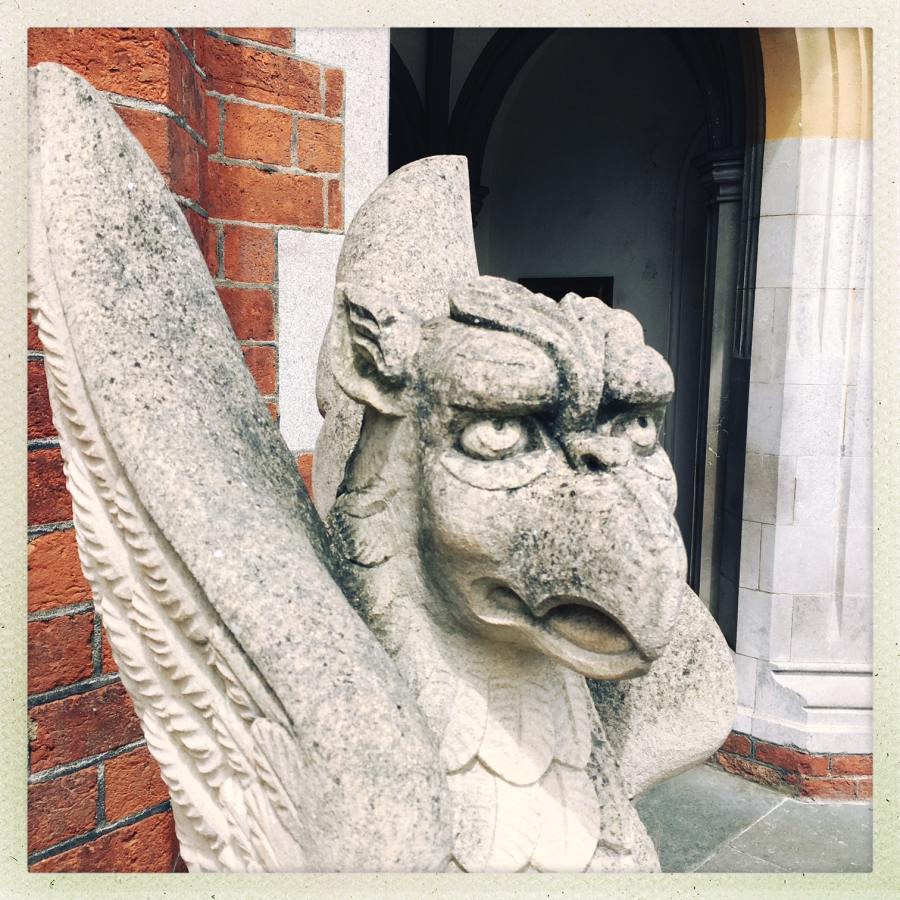 Griffon sprains his eyes from rolling them too hard.

Griffon symbolized protecting something important. In this case, it was probably appropriate – ULTRA – the secret that the allies were reading the German Naval Enigma encryption system – actually did have a major impact on the war. And WWII was a close-enough run thing for the British that they can legitimately say that “every bit counts.” 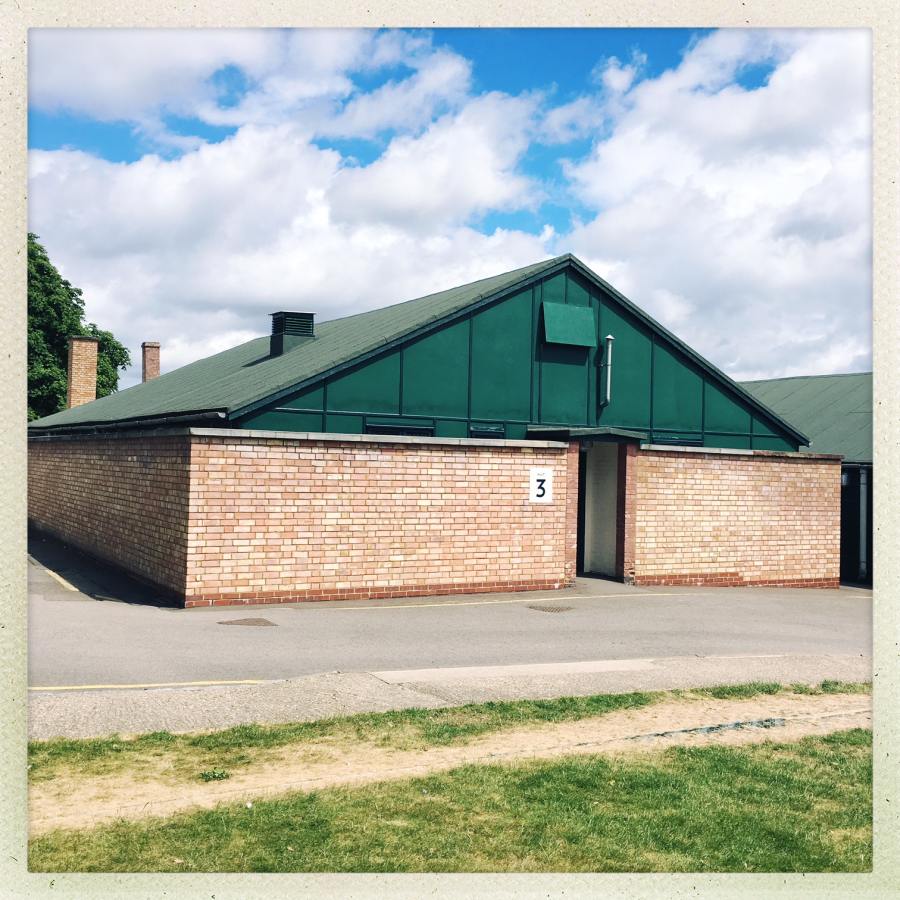 The main work was done in numbered huts – designed with blackout features: note the shrouded vents. Inside, they are very utilitarian: 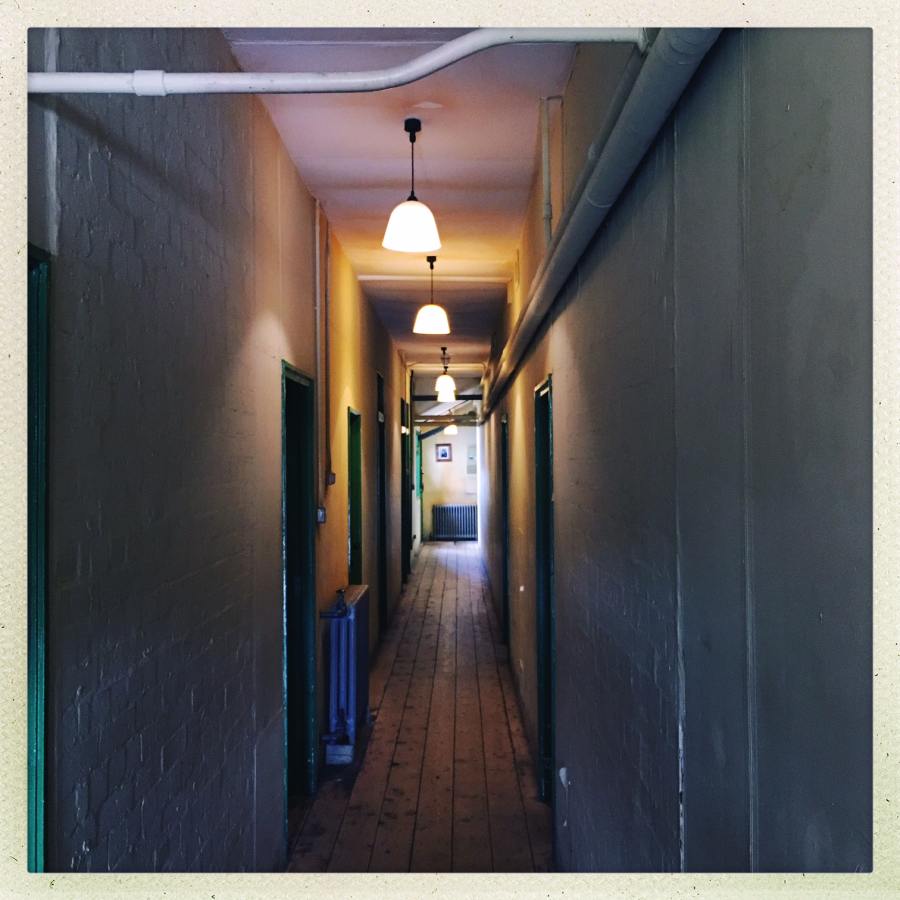 It is an interesting fact of intelligence that the strangest places are where a lot of important action can happen. There are many huts at Bletchley Park, some of which were where the electro-mechanical code crackers were set up, others were rooms of teletypes, and others were where mathematicians (apparently the staff included 4 chess grandmasters at one time, which is pretty unusual!) stared at ciphertext and tried to think of new ways of compromising it.

There were women, too, of course, including women who worked on code-breaking. I didn’t see much about them, unfortunately (or I’d do a “hardcore of yore” posting about them), but it was a microcosm of civilization: cryptographers worked together, fell in love, got married, and cracked codes. One of the interviews I listened to was an old woman talking about how they often could crack some of the weaker German codes because cipher-clerks would use permutations of their girlfriends’ and wives’ names, as well as a variety of expletives. Apparently they once decoded a message from higher up saying “Stop using naughty words! Some of our cipher operators are young women and you will scandalize them!”  Meanwhile young women in England were using swear-words of their own because it was very convenient for to decrypt messages where the keys were simple swear-words. 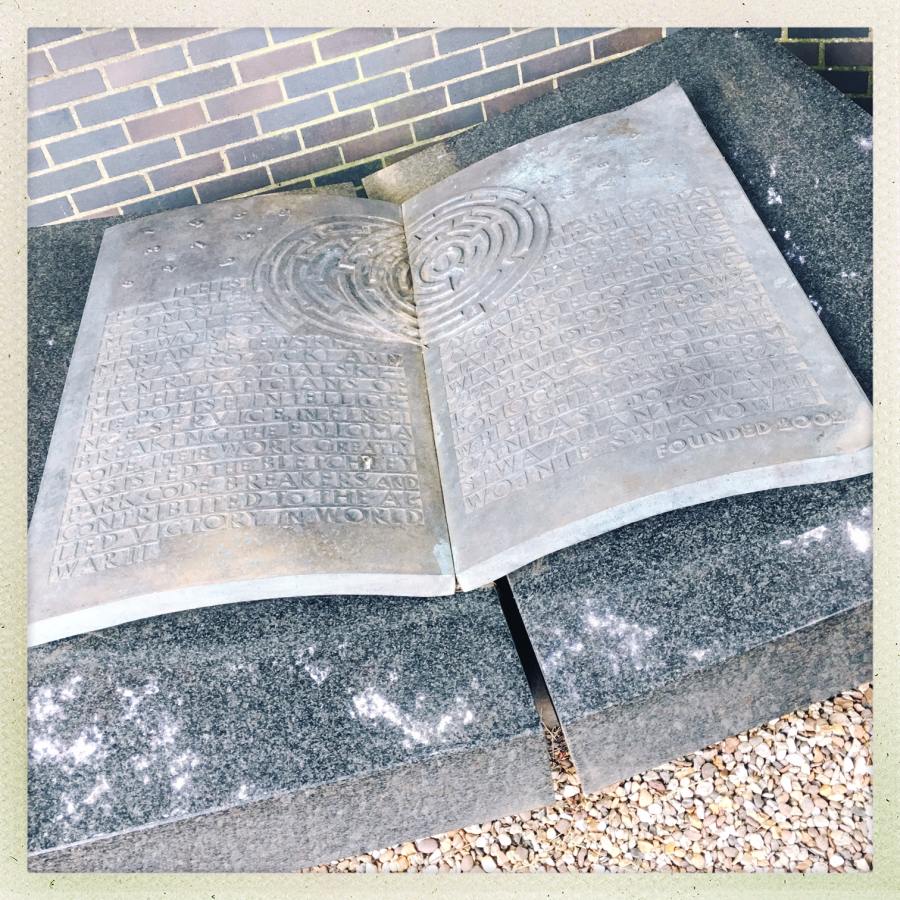 The memorial to the Polish cryptographers

I was pleased to see the memorial to the Polish cryptographers. As the war was bearing down on them, some mathematicians in Poland managed to make some helpful inroads into the German cipher machines, and figured out a few of the rotor architectures, but could not break past the key-initialization plugboard that altered the engine’s inner state when a message was begun. The Poles, uncharacteristically for military intelligence cryptographers, gave all their work to the British before it was too late for them to continue – a noble and important gesture. 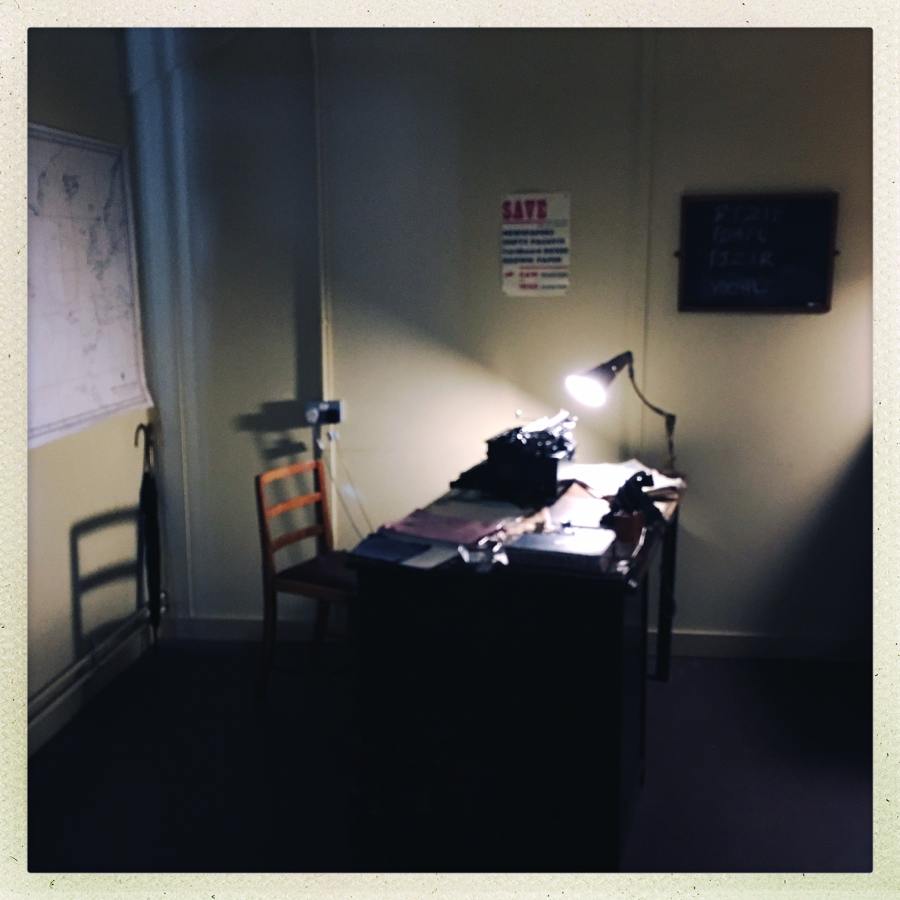 I was disappointed that the signs simply listed the date of Turing’s death and did not mention why, though I was pleased to see elsewhere in the museum was the posthumous pardon granted in 2013 by the queen.

Most of the huts were gloomy and dark, moodily lit with point lights and equipped with period furniture. It was not a posh place, but it probably was a relatively comfortable place to spend the war compared to many many others. 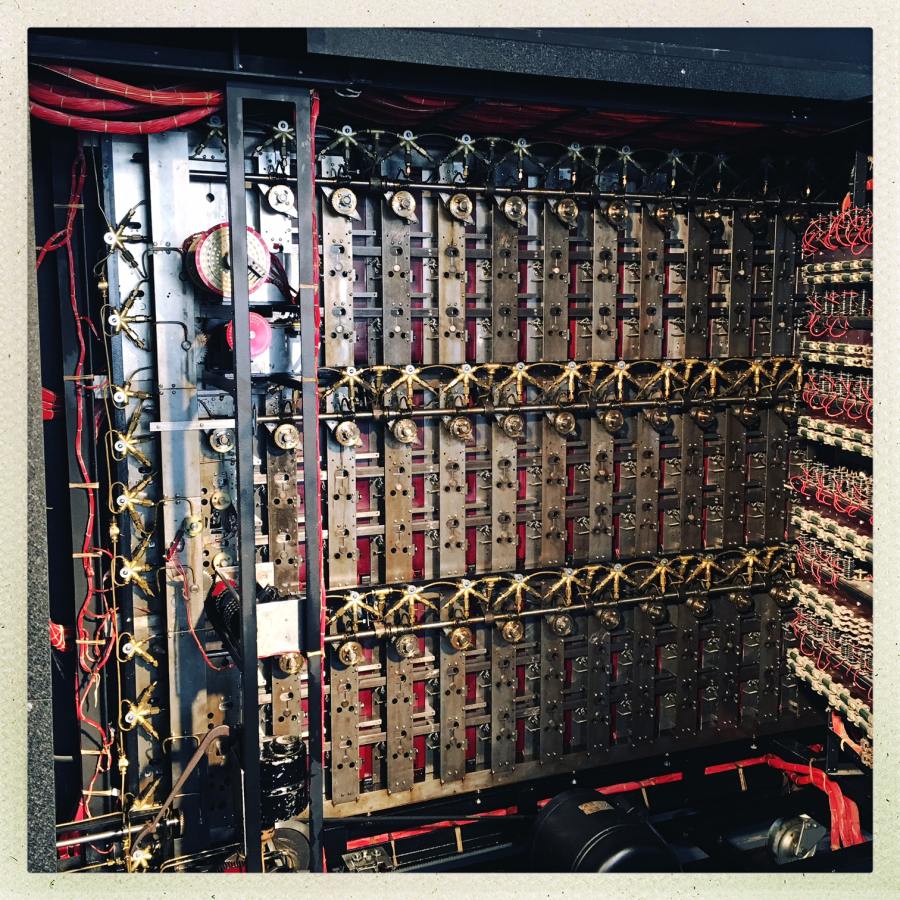 The heart of ULTRA is the device above; that’s the drive-plane of one of the “bombe” electro-mechanical decryption engines. The little curving brass pipes are a machine-oil distribution system that kept the gears lubricated; the bombes ran as fast as they could without falling apart: every extra RPM meant more cipher-setting combinations checked.

The mathematicians were able to only get so far against ENIGMA so they designed and had built a set of engines that could complete the decryption. The way an ENGIMA machine works, it encodes the messages using an electrical current that is carried through a set of rotors that move with clockwork drives every time you encode a letter. So, you push a key (once the rotors are started in the correct setting) and a letter lights up on a panel above the keyboard. When you push the key, the clockwork moves the rotors, which progresses the circuit.

I will do another posting about ENIGMA machines later; I have something beautiful and wonderful to show you about them. 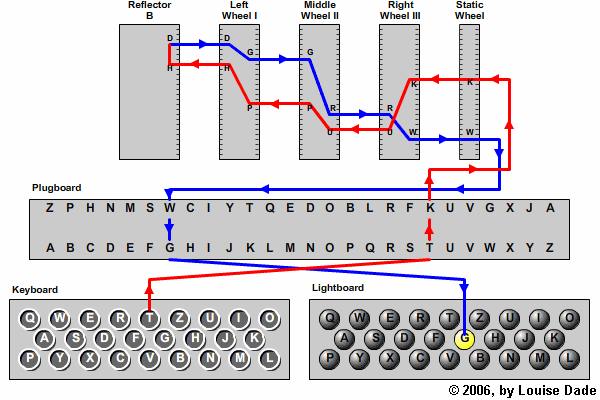 Anyhow, the mathematicians were able to reduce the strength of the encryption algorithm but not completely crack it, so the bombes would whirr and click and spin through all of the options as fast as they could, until a bit of German popped out the other end and the operators knew they had the key for the day.

There were a few other encryption machines in the museum, including a Japanese ‘tunny’ machine and some early rotor machines, but the bombe is the thing to see at Bletchley Park; it’s the signature device of early crpytanalysis. Later, an early digital computer called COLOSSUS was installed at Bletchley Park, but it was dismantled to save space – “COLOSSUS” was a good name; many early computers were rooms and rooms full of delicate wiring that would fail if you looked at it sideways.

I had a cup of coffee in the Hut 4 cafe then hiked back to the train station, to London, and took a taxi over to the Victoria and Albert to visit some old friends.

If you want to know how ENIGMA machines worked [how]

ENIGMA machines occasionally come up on Ebay. I think the last one went for about $30,000. You can buy replicas for relatively little. Right now (I just checked) there’s a Hagelin M-209 for $3,500 – which is a pretty high price for a fairly common machine. There’s a fun story about Hagelins: the NSA “helped” Hagelin with his encryption design. “Helped” a weakness right into it. They pulled the same trick on a company called Crypto AG – NSA shenanigans regarding weakening encryption are nothing new (which is why most of us major colonel lieutenant generals in the Tin Foil Hat Brigade tend to assume that anything coming from the NSA is double or triple-edged, and only the NSA knows the number and direction the edges are facing)