I was going to post something about this Saturday night or Sunday morning but it suddenly became a bit more relevant, now that the US has attacked Syria. You probably should know that the US invaded Syria back in November of last year.

Since the US and Turkey have been having some issues (e.g.: the Kurds, Manbij, etc) the US has been having some trouble using Turkey’s Incirlik air base. So, they just went and built their own in Syria. I know how concerned the US is with respecting other nations’ sovereignty [stderr] so that’s probably why hardly anyone thought to mention it to the public.

WASHINGTON – The Air Force has expanded an air base in northern Syria to assist in the fight to retake the city of Raqqa from the Islamic State, U.S. Central Command said.

The base is near Kobani, which is about 90 miles north of Raqqa, the last urban stronghold for ISIS in Syria. It gives the United States an additional location to launch aircraft to support U.S. and other anti-ISIS forces in the campaign to recapture the city, said Col. John Thomas, a spokesman for Central Command.

I did a bit of noodling around in Google maps to see if I could get a screenshot of the airport, so I could save it for later comparison, but I wasn’t able to find it. Kobani is right on the border and there appears to be a big border checkpoint and a wall. Also, a rather interesting thing: 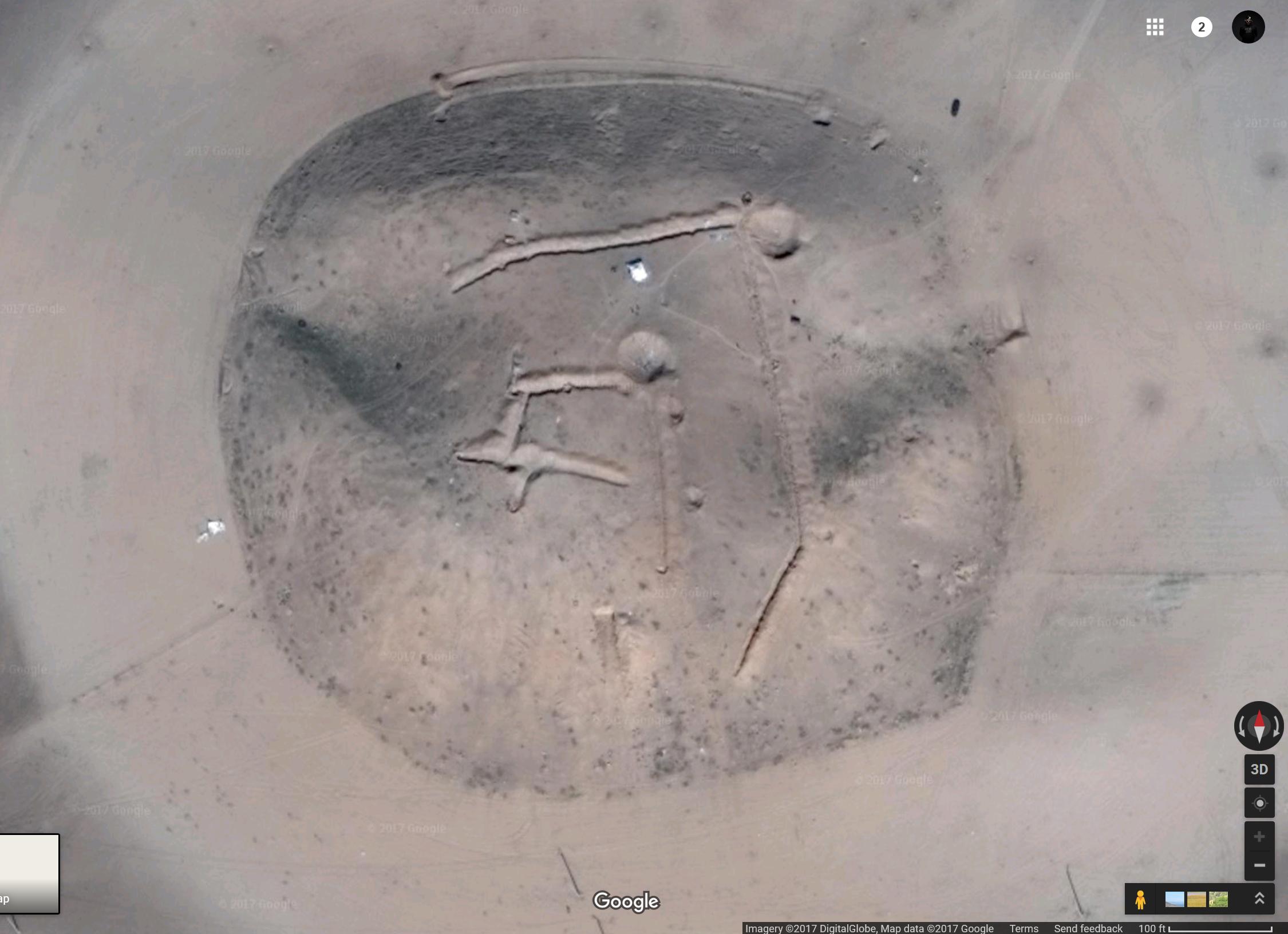 It looks like it might have been a surface to air missile battery at one point, and those two big craters look like they appeared kind of suddenly. Anyone hazard a guess what we’re looking at there?

The airmen entered Syria in November on a C-130 that landed on an airstrip of crushed rock, said Senior Master Sgt. Chris Wright, who led the 621st group’s security forces on that mission.

The Air Force’s contingency response group is tasked with landing on austere airfields so it can prepare them to receive aircraft and forces. Much of the time, the group is setting up airfields to respond to a humanitarian crisis, but has deployed three times during Operation Inherent Resolve.

In 2016, the group established the Kobani airfield in Syria and also set up an airfield at Qayarrah West in northern Iraq to support the fight against ISIS in Mosul. In 2015, it established an airstrip at al-Taqaddum to support Iraq’s battle for Ramadi.

Don’t mind us! We just moved in so we could bomb you more easily! November last year, did you say? That would have been when Obama was president?

The US way of making war is very very logistics-heavy, which always results in a piling-on of more logistics and more logistics. When you build an air base in a country you’re bombing but not at war with, you need security – and that means troops, lodging, weapons, fighting positions, light armor, perimeter defenses, mess halls, bunkers, ammo storage, trucks, fuel – and then you need more troops in order to protect the protectors. Just the US military’s logistical train for a single air base is probably bigger (and more costly) than some nations’ entire military.

The article concludes with one of the weirdest sentences I have read in a while. Puzzle over this:

The Pentagon is assessing whether the troop limit in Syria should remain, since there are numerous categories of deployments that are not included in it, such as some special forces. If the limit is lifted, the Pentagon could provide a more accurate account of how many U.S. forces are in the country.

Here’s what I think is going on: the air base is in a Kurdish-controlled region of Northern Syria, right on the Turkish border. There is discussion in the Kurdish press regarding the building of an American air base in Kurdish-controlled Syria, starting back in 2015. [kurdistan24]  It’s likely that everyone in the area is pissed off except the Kurds, who are setting themselves up as a nation up there, and are probably trading US recognition of their statehood for the US helping keep the Turks off their backs.

“Saturday Night or Sunday morning” – I feared that this weekend I’d be writing about the strike on North Korea that I expected was going to happen friday night.

Let’s go back and have a look there next year and see if there’s a great big sprawling air force base with a Starbucks and a Pizza Hut. Here are the coordinates of that weird dirt mound.

Stratfor appears to place the air base near Rmelian, though there is no sign of anything in that area, either. If any of you are bored and like looking around satellite maps, have at it. Rmelian is in an interesting location: it’s about 5 miles from Iraq and 10 miles from Turkey, but it’s inside Syria. This appears to be what stratfor is talking about, which … does not look like a military airport at all.

Sofrep [sof] has a picture of something that looks like an air base, but I see nothing resembling it on the satellite imagery.