“Yes o sis, na so I see am o! By fire by thunder, I held tight to angel Michael’s robe and got a free ride to heaven. Naija no dey carry last, no dulling!”

Just saying it surely won’t be fun if the resurrected can’t recognise themselves in the afterlife!

Another thing is, if the beloveth are resurrected or float to heaven as flesh and blood, we need to consider if their body system

would still work as normal. If you have blood flowing through your veins, you might still need to eat in order to nourish the body. However, I am concerned about some other urges apart from food. For example, what about sexual urges? Would the penis still throb at the sight of a beautiful, naked lady or a rubenesque angel? After all, in the early days, some angels were so tempted that they abandoned their heavenly duties to mate with the daughters of Eve, thus paving the way for the birth of giants, or so the myth goes.

I don’t know if there would be clothes in heaven but when Michelangelo first painted angels wearing sandals, it caused a big uproar in the church as many questioned whether or not angels wear shoes. Animals might particularly be interested in the answer to that because some angels might have a preference for crocodile skin shoes!

But coming back to sex in heaven, how many men are actually happy to have a limp, no longer active penis? I think many would 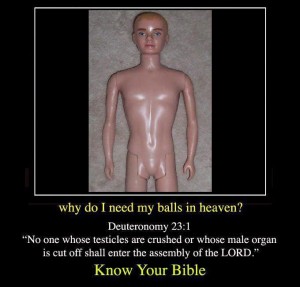 consider this to be a fate worse than death. But come to think of it, Deuteronomy 23:1 says “No one whose testicles are crushed or whose male organ is cut off shall enter the assembly of the Lord.” Well, it seems there will be sexual action in heaven but if your balls aren’t intact, you ain’t getting resurrected! This is one reason to feel bad for faithfuls who have had their balls removed for medical reasons. It does not matter if they were good Christians who obeyed all the Ten Commandments, they still won’t be resurrected because of their missing ball(s). Not fair!

Now, coming to a very pertinent woman-related concern; would women still menstruate or would monthly circle be a thing of the past? Would sanitary pads makers like Proctor and Gamble set up a special branch in hell or would heaven be their new manufacturing headquarters? Oh, are all those poor trees still gonna be felled down to make tissue papers for menstruating women? Are there even trees in heaven? Won’t this still lead to climate change in heaven or even hell? Now, let’s not be too analytical, we all know God works in mysterious ways, and that settles it!

I for one won’t miss the bloody monthly circle and would happily give Skydaddy a kiss if he gets rid of it. However, if it persists, would resurrected women still need to buy sanitary towels for eternity or will there be a welfare supply of sanitary pads in heaven? Since there is no getting old in heaven, which also means no menopause, I shudder to think of the horror of being stuck with a monthly bleeding vagina for eternity. I am concerned for resurrected women because from all indications in the bible, God isn’t cool about menstruation. In fact, Skydaddy said many times in the bible that menstruating women should not be allowed in his holy house. He also forbids men from interacting with women who are in their menstrual periods.

If resurrected women still menstruate, does this mean that they would be banned from heaven at least 5 days of every month for eternity? Would they be tossed into hell or would there be a special barn in heaven where women would be banished to during their monthly period? At least in hell, there won’t be any discrimination, we would have the best minds including scientists that would provide the latest technology to take care of our needs and make hell super comfortable for its inhabitants. No doubt there will be great inventors who would come up with a pill to take care of the menstruation, super fire extinguishers to control the burning hell and invent super air-conditioning to keep us in perfect temperature.

BTW, what would the resurrected do for entertainment? Many Christian books show the beloveths singing Hallelujah and

Hosanna to the most high in heaven, while floating amongst flowers. Beats watching fox news all day, I suppose. And talking of flowers, since there are flowers in heaven, I supposed there will be bees. Would those bees sting? Would people still feel pain from a bee sting?

I cannot carry a tune even if my life depended on it, but if by some miracle I found myself amongst angels and the resurrected in heaven, would I have my old aluta voice or would I by some miracle have a sonorous, angelic voice?

I guess God might want me to play the flute or harp to massage his ego 24 hours /7 days a week for eternity, but as a black African, can I introduce Skydaddy and his white angels to the joys of the African drums or would they find my African beats too jarring on their angelic nerves? Wait, can I twerk for skydaddy 24/7?  Hmm, not a very enticing prospect, I never liked dictators, bigots or egoists and I am definitely not shaking my booty for one!

This is definitely another reason to make sure I am not amongst the resurrected. I mean, can you imagine what the entertainment would be like in hell?  An eternity of super star line ups from great musicians to great comedians and the eternal pleasure of rubbing minds with great thinkers. What can I say but WOW, sign me on!

Now, let’s talk about food. I love my food and one thing that makes me sad about dying is the thought of never eating chocolates, cake or a plate of pounded yam and goat meat vegetable soup again! I don’t really know if the resurrected would need to eat in heaven, but I do know eternal life would not be worth it if I can no longer experience the pleasure only a bowl of chocolate topped vanilla ice-cream could give. Anyway, if foods are allowed in heaven, will there be Rice, Amala, Akpu, Pounded yam and Equsi soup or will it just be salad and all dem leaves? I foresee conflicts that could lead to protests and riots.

I mean Vegans, Vegetarians and us carnivores might end up fighting! Vegans would shout “No more hurting the animals, this is

paradise for animals too, no more pain for animals” and die-hard meat eaters like me would scream “We want goat meat!” Blame it on papa God and His lousy, not so intelligent design and definitely cruel food chain! The lousy food chain would lead to pain and riots. With the presence of pain, I guess it won’t be paradise anymore, just Planet earth 0.2 with little or no system upgrade. However I am curious to know if the resurrected would still need to count calories. I mean, would it be an eternity of “Eat all you can buffet, no calories gained? Wow, that would be a real paradise, the kind of system upgrade worth dying for!

Also, I think Jesus said something about quenching the thirst of its followers forever, I guess there won’t be a need to drink water. I do wonder why many Christians on my social network are quick to inform me that when I languish in hell begging for a drop of water, they would majestically stare down at me from their heavenly seat and not give me a drop to drink. I get this a lot from self-righteous Christians and I wonder, what would darling Jesus think of such callousness? Not very Christlike now, is it?

But wait a minute; is heaven and hell that close? I mean, many Christians obviously expect to be looking from their heavenly throne at such close proximity at Atheists burning in hell fire and many actually salivate at the thought of watching atheists suffer in this mythical hell. What sort of person takes pleasure in anticipating the pain of another? Hmm, I guess such a person has created God in their own sadistic, malicious and vindictive image and they often picture themselves sitting on his arms, or is it lap? Problem is, these God’s creators are yet to come up with a good product, plus they make lousy salespersons!