Congress ought to be holding hearings to investigate the FBI’s non-competence as it sat around with its thumb up its butt while a nearly successful coup brewed. Remember, the FBI is the organization that is responsible for domestic counter-terrorism – the organization that notoriously spends a great deal of time creating terrorist plots so they can arrest the people who fall into their snare – their job is to do things like, well, stopping coups. The US people and government have placed an inordinate amount of trust (and money) in the FBI and we ought to be investigating the monumental incompetence of the agency.

Post 9/11, the FBI urged the US to throw privacy on a bonfire in order to make it easier for them to “fight terrorism” – giving them surveillance drones, AI face matching, “fusion centers” and Palantir, and backdoors into encrypted email services and social media. Basically, everything they asked for. And none of it has helped. Congress ought to be asking “why did you ask for all these things and fail so badly at your job?”

Of course, to do that we’d need a department of justice that had not also been hammered into incompetence. No, not “incompetence” – it was corrupted. And it needs to be purged. [sorry for the colonoscopy metaphor but that’s exactly what I’m feeling]

As I described before, under the Church Committee questioning, a former FBI assistant director admitted that about 25% of the KKK’s membership was undercover FBI agents or other FBI assets (nowadays they call them “confidential informants”) [stderr] and now we know also that Enrique Tarrio, leader of the proud boys fascist militia, is an FBI asset. [stderr] The failing establishment hack collective New York Times sort of dances around that fact, as it reports [nyt] that:

A member of the far-right Proud Boys texted his F.B.I. handler during the assault, but maintained the group had no plan in advance to enter the Capitol and disrupt the election certification.

Wait a second, let’s back up: (hacked from the text with my bolding)

Among Those Who MarchedInto the Capitol
texted his F.B.I. handler during the assault
In the middle of an unfolding melee
the informant described his path to the Capitol grounds where he saw barriers knocked 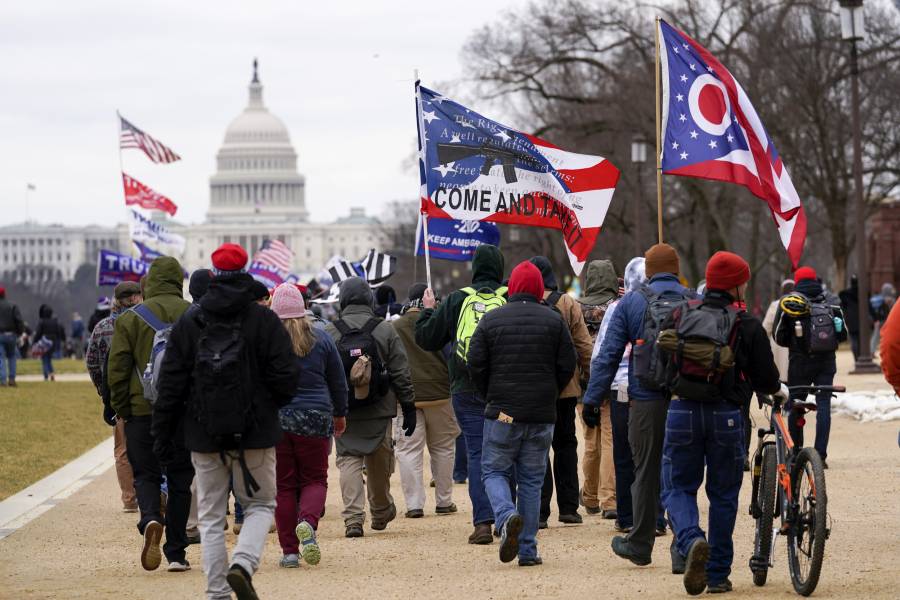 The guy’s flag says “come and take it.” Sounds like grounds for a pat-down. And fucking take it.

It goes on like that. The NYT can’t seem to call it an attempted coup. And they rely on minimizing language throughout the article. The melee, you know, just sort of unfolded – the unknown informant and therefore the FBI are granted a passive role. But there’s no active role in the article at all, because an active role would raise questions like, “where was the FBI?” and “how incompetent does a law enforcement anti-terror agency have to be?”

Because, that first bit I quoted indicates that the FBI’s informant did not tell his “handler” the truth. That’s the first level indication. The second level indication is that the FBI had at least 2 (informant A and Tarrio) detailed views into the planning of the event. I have some experience in basic counter-intelligence stuff, and it doesn’t take me very long to wonder the basic counter-intelligence questions like: “did you check and see if your informants were telling you the same thing, or not?” Right? Because if I have several informants and they are telling me different things, I just learned something important about what might be happening – whereas if they are all telling me the same thing “we’re just going down to have cheese-steaks at the food truck on the mall” then I know there is a tight conspiracy going on. Or that they are all going to have cheese-steaks. But, if the things my informant tells me don’t match what happens, I will hang the informant on a steel hook from the castle battlements. Not because I’m a horrible person, but because that’s how you make informants better: evolutionary pressure.

At one point, his handler appeared not to grasp that the building had been breached, the records show, and asked the informant to keep him in the loop — especially if there was any violence.

Gosh, it’s all so passive, isn’t it? Stuff just happened. The informant, really, was shocked that the cheese-steak food truck was closed and the building was breached. You know, as if there was no planning and no warning except what NYT is actually discussing is a warning that was ignored, and an informant that deceived their handler. Imagine the shit-storm if one of the 9/11 plotters had been an FBI informant? [By the way, there’s a million-dollar movie plot, right there. Don’t say I never gave you anything]

With no sense of irony, NYT continues:

The use of informants always presents law enforcement officials with difficult judgments about the credibility and completeness of the information they provide.

Uh, it does if what you’re trying to do is maintain your penetration of the organization, and not to actually shut down the organization – i.e.: do the anti-terror thing. Remember, the FBI spent approximately a bajillion dollars of the taxpayers’ money building and mandating backdoors into the entire internet, assembling a massive surveillance infrastructure, so they could stop terrorism and not simply go on a walk in the park with it.

After 9/11 there was a very expensive commission that made a bunch of quite sensible recommendations, most of which were ignored. At that time I was working in parallel on a book entitled The Myth of Homeland Security [wc] [please do not go and read it. I said some nice things about Bush in it we all later regretted] and I closely tracked things like the 9/11 committee – there were lots of people saying sensible stuff about counter-terror including my old friend and sparring partner Bruce Schneier – stuff that was ignored. One of the points I made was that giving the FBI more money was a bad idea: “if you give a failing agency more money because they failed, you’ll just get a bigger failure.”

We desperately need a new Church commission and a congress/Attorney General that is willing to disassemble the FBI and reconstruct it as an actual, effective, national law enforcement apparatus. The problem, as I said it in 2001, is that spies and cops have very different agendas that never align – and the FBI can’t decide if they are spies or cops. They try to be both, at the same time, so they’re good in neither role.

But the records, and information from two people familiar with the matter, suggest that federal law enforcement had a far greater visibility into the assault on the Capitol, even as it was taking place, than was previously known.

Observe the embarrassing sight of The Gray Lady trying to cover her tattered modesty by pretending to believe the FBI only had 2 informants operating in what was a fairly well-understood insurgency. Given the sources that NYT must have had, in order to publish that article, they would have to have constructive knowledge that there were more “boots in the crowd” than just the two pairs they’ve talked about. In fact the NYT goes out of its way to make sure we understand that Tarrio was not in the crowd:

Mr. Tarrio was not at the Capitol on Jan. 6, having been ordered by a local judge to stay away from Washington after his arrest days earlier on charges of illegally possessing ammunition magazines and burning a Black Lives Matter banner after a pro-Trump rally in December. He is currently serving a five-month sentence on the charges.

He’s busy serving his slap on the wrist – imagine what they would have done to a Black Panther leader like Fred Hampton, who was conspiring to bring weapons to Washington, uh, never mind. The point is: they had enough information about what was going to happen that they deliberately and carefully took their valuable stool pigeon off the playing field the day before the attack, and constructed a story protecting him – sort of – for not being there. So, the NYT has to dance around the question, “if the FBI knew some bad shit was going to go down, bad enough that they pulled Tarrio out of the situation, how can they pretend that they totally believed another informant who said they were seriously just going for a walk on the mall to get some delicious cheese-steaks at a food truck?” And, in spite of the obviousness of the administration’s attempt to make sure the national guard was unable to deploy, and that the capitol police were understaffed and under-geared – that was also unknown and all a great big surprise to the FBI? Pull the other one.

What worries me about the whole thing is my suspicion that if all the FBI’s informants had been told to stay home, the crowd would have been 25% smaller.

Look I’m In A Band! » « The Colonoscopy Report