What is it about wealth that makes people who were successful at one thing decide that they’re actually good at everything?

I can probably answer my own question: once you have a certain level of money and clout, you can solve problems with a lot less effort. You tell your majordomo or factotum or whatever you call them, “go get me a photo op with ${whoever}” and they do the leg-work of making it happen. All you do is write some checks, so then the actual process looks easy.

That theory, if “theory” is the right word for it, also applies to how wealthy/powerful people develop a sense of entitlement: they forget (or never knew in the first place) how hard it is to make things happen by yourself, and they get annoyed as hell when they actually encounter the day-to-day difficulties of life, like dealing with a flat tire or a slow line at Starbucks’ or whatever. 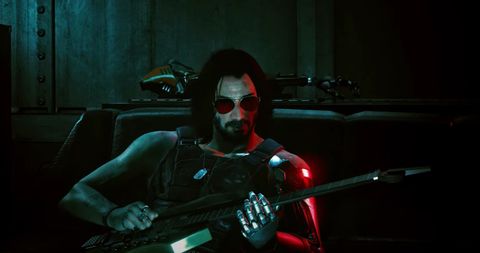 Anyhow, Anna and I recently played through Cyberpunk 2077, which sucked, and our conclusion was that one of the suckiest things about it was Keanu Reeves’ “contribution” toward making the game less playable. There are constant interruptive play-breaks in which Keanu demonstrates how tough he is, which mostly triggered controller-pounding and temple-clutching. But the worst part about Keanu’s performance was the parts where it’s clear that he’s trying to make sure all his involuntary fans know: he was in a band. In other words, it was a desperate plea to think he’s cool. It had the opposite effect; all we could think was that he’s another insecure dweeb boy whose financial and cinematic clout are on their way to ruining his life.

Oh, and that name, “Johnny Silverhand” is not an homage to William Gibson’s Johnny Mnemonic though the game designers probably thought that shitting all over the best stories in cyberpunk fiction was somehow a tie-in. At another point in the story, Keanu makes sure you know he likes classic Porsche 911 Turbos, too, and the in-game vehicle line-up includes some motorcycles that Keanu really wants you to know that he actually owns in real life. So now his taste in bikes, guitars, and cars are featured prominently – and called into doubt – in the game. What a dick. 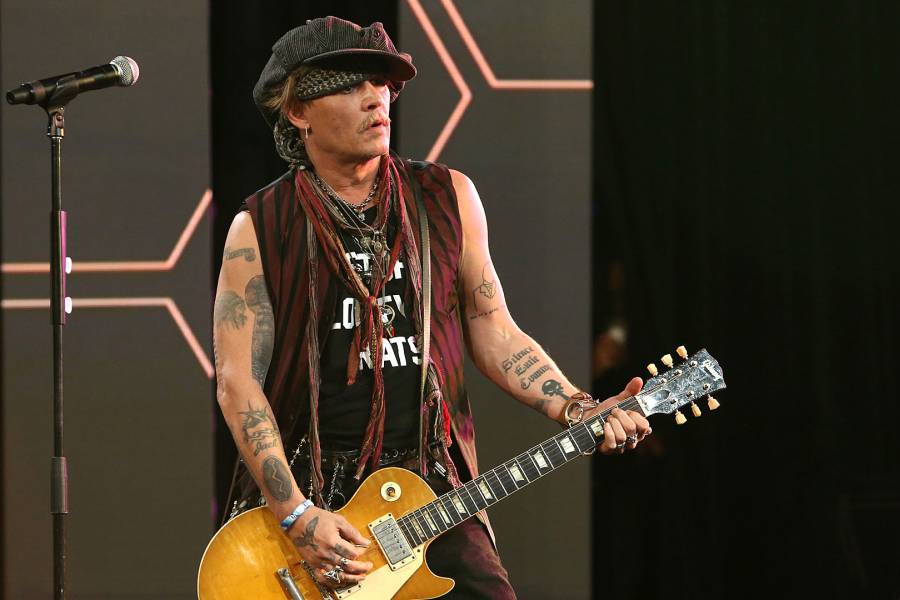 And of course there is the other famous Hollywood dick guitarist, Johnny Depp. Why not age gracefully and let the alcohol take care of it? Naw, gotta have a band. I hate to say this, but I know enough good musicians (and one great one) that I could throw some money at and probably produce a few tracks. Maybe I could rap? Just joking – I have enough things to do that I am not very good at that it seems silly to add another. Not everyone has to be a renaissance man, I suppose.

But I think it’s probably mostly an excuse to hang out with real musicians. If you’ve got the money and a publicist you can set up a gigging opportunity with other musicians who need the money. There are plenty of has-beens who’ll take a bunch of money to appear on stage with a wanna-be. I’m sure I could rap battle Vanilla Ice and maybe he’d let me win if I spent enough. Yuck. 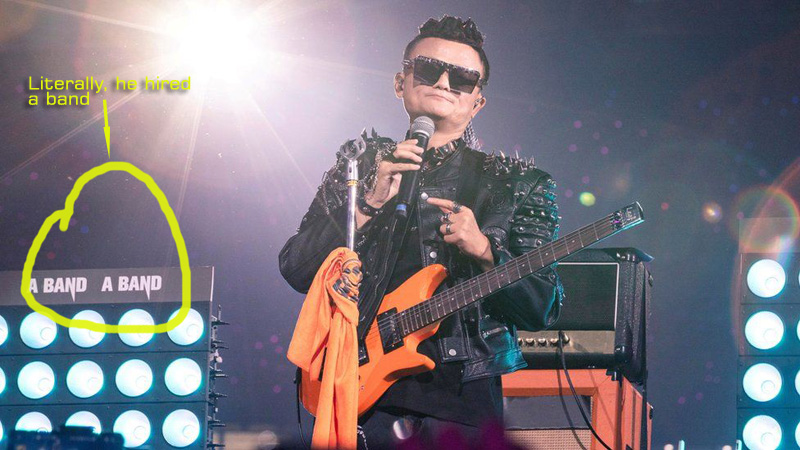 In an otherwise interesting article on BBC, [bbc] there is a picture of Alibaba billionaire Jack Ma, who is an otherwise smart guy, demonstrating that he’s got some issues with ageing gracefully. I hope he gets a better publicist; they should have done something that was maybe more dignified, like hire a room of joke-writers and buy him the opportunity to MC the Golden Globes, or some other horrible denoument for his career. See the problem? When you can afford to buy the Golden Globes outright, it’s hard to keep some rich jackass from buying the microphone.

I’m not saying, exactly, that this is wrong because I’m not even sure what wrong is, but it’s distasteful to me. Why? I appreciate skill and artistry, which are two of the things you can’t just buy; you have to put your time in and do the work. Even so, it’s possible to spend a lot of money to remove all of the impediments in your path to gaining skill. There’s a popular art photographer who seriously does excellent work, who started his work-life as an opthamologist, presumably made a bunch of money doing that, then switched over to photography. It helps if you have enough money to buy studio space in New York and hire a publicist. It doesn’t substitute for talent [what is talent? coming up] but it funds the research and development.

It’s my opinion that “talent” is not really a thing. Sure, you need basic eye/hand coordination but all you need to do to be a photographer is learn the lighting, learn to think about composition, learn the technical details of the camera technology and current imaging landscape, and practice for about 10 years. Someone we might call “talented” is someone who can shorten that 10 year process of developing excellence down to 9. Someone who is wealthy and can afford to have staff that bulldoze all of the impediments away can shorten that process down to maybe 7 years. I’m a case in point: I had a successful career in IT security that allowed me to shift to metal-working without the need to feed and clothe and house myself. I was also able to buy all the gear, which is non-trivial. Keanu Reeves can afford to be a “motorcycle designer” because he has millions of dollars from being an actor and can choose the level of his engagement with his motorcycle designing process. I’d find it extremely distasteful but I could hire an “understudy” to be a knife-maker for me, and be a “knife-maker” studio, which is an old tradition in the arts – have understudies doing the boring set-up work and then the master comes in and finishes the job and signs it. Dale Chiuly, the famous glass-blower, doesn’t blow glass – he designs it and an understudy blows the glass. How does he then call himself a “glass blower” and how does “his” work command high prices? I want to dodge the question of whether Chihuly is talented or not.

The “I’m in a band” meme seems to me to be a cheesy way of hanging out with real musicians. Jared Leto, Ryan Gosling, Russell Crowe, Jack Black… I’m not saying they’re not good, but I think it’s not unreasonable to question whether they got to be front-men in a band because they’re good, or if they’re just egotistical guys with a lot of money. I’m also vaguely reminded of “The Blues Brothers” – Dan Ackroyd and John Belushi – who cooked up one of the best scams in this regard: they made a movie that required that they get to hang out and jam with real musicians (and Carrie Fisher). It wasn’t a bad movie, actually, but it was pretty clear what was going on when they made a sequel with a Last Waltz-style line-up of amazing musicians that ended with a great big ensemble jam. All it lacked was Vanilla Ice, who was probably available at the time.

All of this meandering is triggered by this thing that dropped into my in-box thanks to the youtube algorithm. I sometimes enjoy watching footage of fake martial arts, most particularly aikido. And one of the great fake aikido practitioners is: Stephen Seagal. So, yes, he crops up in my inbox sometimes. Like this:

Please go gentle into that good night. At least he’s not a blade-smith.