Would you like to see a glimpse into the kind of embarrassing shit Americans are going to come up with as the climate crisis continues to bite? My prediction is: if you think our response to COVID-19 was lethally stupid, “you ain’t seen nothin’ yet.”

Volkswagen famously cheated on its diesel emissions tests, by putting “test defeat” subroutines in a car’s engine control computer. The computer would detect when an emissions test was being performed, and would adjust the engine’s parameters so it ran cleaner but produced less horsepower. In default operation, the engines emitted something close to twice the carbon target under California law. When VW was caught, it was particularly problematic, because it was obvious that there was a test defeat in place – the engines exhibited exactly the same behavior – then, it was time to start subpoena’ing memos to see whose clever idea it was. 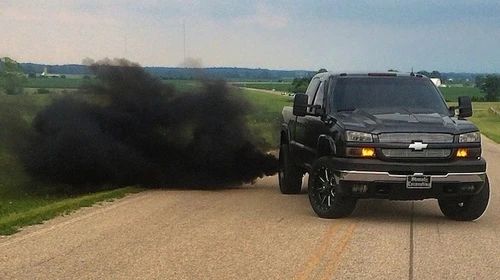 I’ve had experiences in companies that are poorly/autocratically run, and have seen employees take risks like that, on behalf of the company, and it never seems to end particularly well. Note that, as I say that, I am thinking of both SolarWinds and their customers – everyone was busily avoiding having to think about the things which are within the purview of “IT Manager” to think about. Accounts I’ve read about the VW disaster are that engineers kept trying to hit the emissions targets, but couldn’t, and their jobs were being threatened by management that didn’t want to hear about problems. So, they figured “since my job is already on the line, why not cheat?” It’s an inevitable result when individual outcomes are jeopardized in favor of corporate outcomes. Hold onto that idea, because…

America’s got a big problem, right now, with “toxic individuality” – that’s a form of libertarian-style personal independence in which people’s right to be stupid is preferenced over doing something sensible that aligns with the collective. While everyone (“the collective”) may be forgoing a certain activity the toxic individualist deliberately engages in that activity as a sort of protest against the collective. Usually, terms like “political correctness” and “free speech” get thrown around a lot by toxic individualists. Exploring the extreme limits of behavior in order to “own the libs” is bullshit – we libs aren’t “owned” or “triggered” – we just think the individualist is stupid and is making the worst possible case for their rights. For example, I do support people’s right to openly carry weapons, in certain situations – but they’re fucking idiots if they exercise that right when they go shopping for groceries. The problem is that a certain kind of liberal falls into the trap of saying, “Hmmm, I do support your rights…” which the toxic individualist takes as “… always.” So, we get things like a rather stupid article at Vice, which asserts that rolling coal probably doesn’t make environmental pollution much worse. [vice] After all, semis, which are regulated, make more pollution (because there are a lot more of them, jackass!) than private vehicles.

Progressives are panicking over diesel truck drivers who intentionally blow smoke at hybrid cars. But rolling coal isn’t about Obama. It’s about America.

It’s not about America, at all. It’s about a toxic version of an imaginary America – a version of America in which entitled people (which also means white people) are able to do whatever they want as long as they can afford to do it. So, this kind of toxic individualism is tied into having money, too. That means it’s pretty easy to break it down into a simple case of potlach: “I can afford to be a jackass, so suck it.” The problem is that the entire US can afford it, mostly, and the US is driving atmospheric pollution.

Over the past few weeks, there has been a lot of hype and hysteria over “rolling coal,” a redneck motorsport trend that involves tricking out diesel pickup trucks to emit giant plumes of black smoke. Mostly, this is done for fun or performance enhancement, but nowadays it seems the kids are “rolling coal” to piss off cops, Prius drivers, and anyone else who happens to get in the way of their big-ass trucks. Naturally, this has driven the left into a panic.

There’s a lot to unpack, there, but one thing that’s interesting is the Vice writer’s attempt to dismiss it as a problem because it’s for fun or performance enhancement (so what?”) and then, it’s a class issue (redneck trend) and – best of all – it pisses off cops and maybe a few Prius drivers. Except that, actually, cops don’t give a shit about stuff like that; the target is really “the left” and “Prius drivers” and the writer at Vice appears to see that as an overlapping Venn diagram. Anyhow, it’s just toxic individuality, right, nothing to see here, political correctness gone wild. 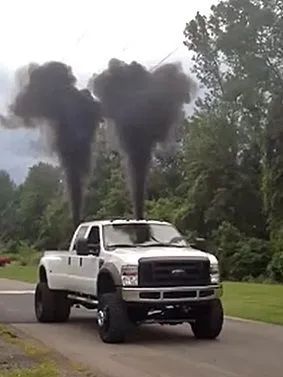 The problem is: it does make things worse. The EU’s equivalent of the EPA determined that, following the VW test defeat device, air quality went down. And the US EPA has determined that, yes, it’s making a difference over here:

A new report by the Environmental Protection Agency’s Office of Civil Enforcement found that just over half a million diesel pickups on the road have been producing 9 million trucks’ worth of excess emissions, reports the New York Times. The reason why? Aftermarket performance modifications that illegally disable vehicles’ emissions control technology.

Oh, oops. Next, we can expect the toxic individualists to switch to their other axis of attack: it’s protected free speech. Just watch.

According to the report, which you can read in full here, the cheatin’ trucks in this study release 570,000 tons of nitrogen dioxide into the air over the lifetime of those vehicles, which is ten times the nitrogen dioxide released by cheaty diesel Volkswagens in the United States.

It’s not harmless fun if they’re releasing the same amount of additional emissions as having another 9 million trucks on the road. That’s a lot of trucks! Also: it’s not a necessary performance upgrade – a consumer truck with a great big Cummins turbo diesel engine in it does not lack for horsepower under any circumstances. I also own a V-8 powered truck, which I use for hauling stuff to/from my shop and put less than 6,000 miles on/year, and even a little bitty V-8 engine is dangerously overpowered in a typical light truck; I do not require dragster-like performance when I’m hauling loads of plywood.

The real problem, in my opinion, is that this sort of toxic individualist response is likely to be about half of the US population’s response to global climate change. “OH YEAH? WATCH THIS!” It’s the same dumbass angry white men that voted Trump in, cheered when he withdrew the US from the Paris Climate Accords (which, the US was already cheating on) and who expressed their freedom of speech by spreading COVID-19 wherever they could. It’s all tied together and the big picture looks really bad.

I’ve said this before, but I’m afraid that America’s reaction to climate change is going to track right in line with its reaction to COVID-19: it’s going to be a great chest-thumping festival of toxic individuality. Trump is not quite there, yet, but opening the Alaskan preserves for oil exploration, as he’s disgraced and being dragged out of office, is exactly the kind of “it’s my right to punch myself in the face!” bullshit we saw in the pandemic, and we’re going to see it again – only worse – in coming years as the climate crisis continues to bite.