Yesterday was an exhausting slog. But I survived and succeeded.

Usually, when I am trying to tackle a bunch of different things, I do the most dangerous (dangerous means it’s always exacting, whether it’s hard or not) first, and then backwards down the list. So, yesterday’s plan was to pour the silver, canister weld some 304 stainless around a bar of twist damascus, canister weld a piece of motorcycle chain damascus for Mike P, and stack and weld a large suminigashi bar that needed to be cleaned and re-welded where the weld didn’t take. By the time I had the suminigashi stuck and drawn out enough to twist it, it was 6PM and I had been working in 100+F heat for 5 hours. I was starting to get the stupids so I did a few twists and headed home for a cool shower and a gallon of lemonade.

I’m not sure what’s actually the most dangerous and exacting thing on that list, but I’m terrified of molten metal, for good reason, having seen some splash on a floor, before. Now, I am fairly confident that I have boosted the safety of what I am doing, mostly thanks to my large sand-table which I work over – if I drop something I may lose a bunch of silver to getting inclusions of sand, but it’s not going to fall far and it’s not going to splash. By the way, when people talk about “splash damage” in online debates, I have a very different visual, which involves everyone having their feet and ankles burst into uncontrollable flames.

Most of the jewelers I know who melt metal use a crucible and an oxy/propane torch to heat the crucible to melt the metal prior to pouring it. Instead, I just put the crucible right in the forge, which is kind of hardcore until you knock it over and have to pick silver out of your forge lining. You only do that once, if you can avoid it. 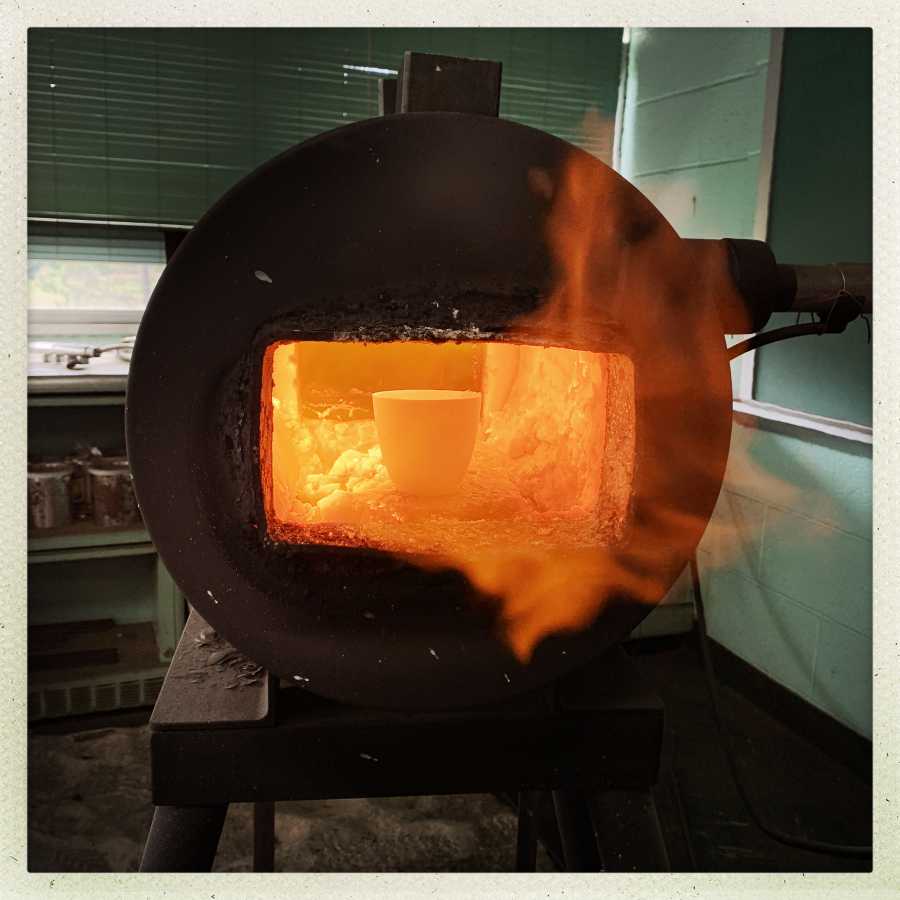 I put the molds on top of the forge to warm and drive off any water, while the crucible got to melting temperature

On the left side of the forge is a canister of stainless/twist heating up for a good long soak. Apparently, I did something wrong in my process because only one side of the stainless stuck, so that means I’ll be making kiridashi or maybe chisel-ground knives out of it.

The crucible I am using is alumina, which is really beautiful stuff and it can handle 3000F. None of my other gear can handle that temperature so if the crucible has problems, I’ve got worse problems. It’s delicate-looking and I have a long pair of stainless tongs for grabbing and pouring and I am very careful not to squeeze it too hard (I can picture it crushing and squirting) Maybe I should destructively test one… I have graphite crucibles, too, but they tend to slowly erode from use in the forge, which means I’m probably breathing in the byproducts and I don’t like that. 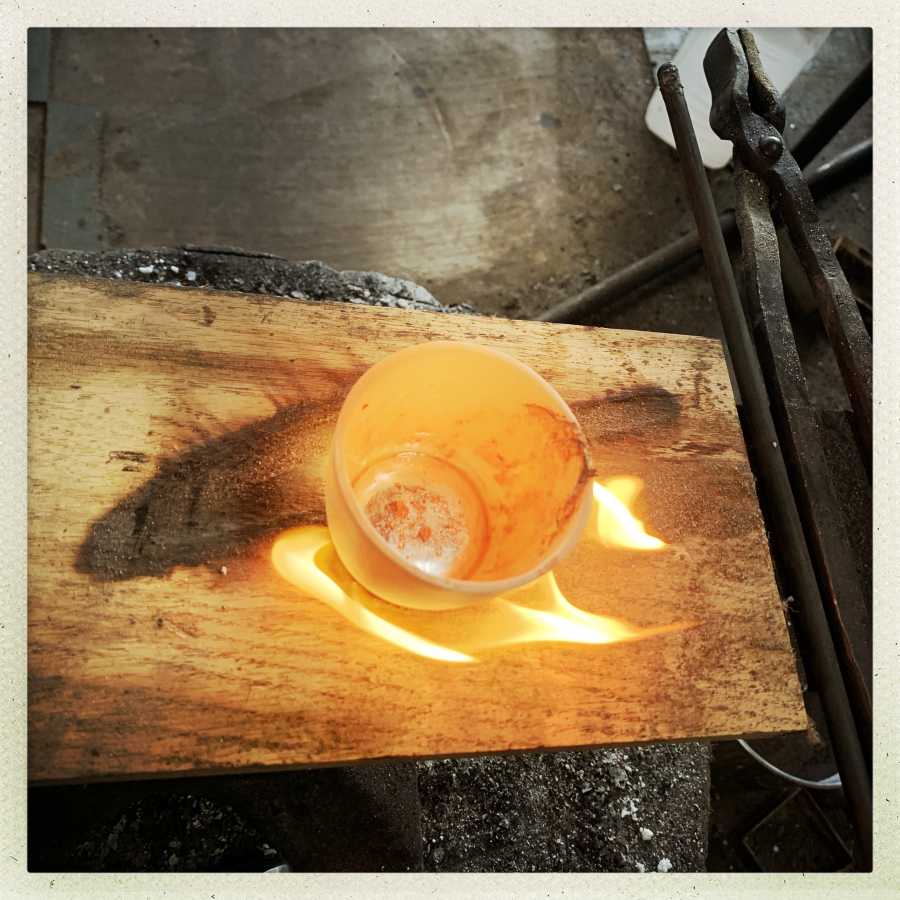 Normally, I’d just put it down on my anvil, but the wood acts as a thermal insulator. If you put a crucible on a cold anvil the anvil sucks the heat right out of it and the metal can freeze very fast. This is where I use a long graphite rod to shmuggle any crap (like the little bits of flux) off the top surface. Then it goes back into the heat for a bit before I pour. 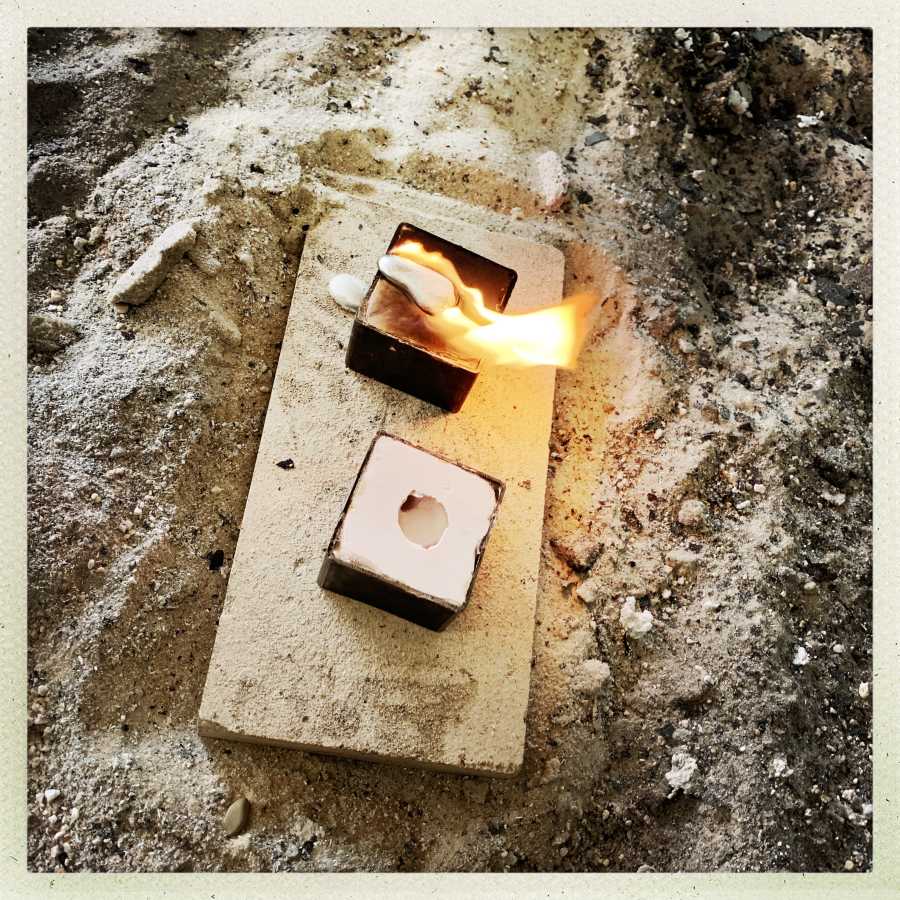 Would you believe I over-pour a bit so I can see when the metal freezes? No? Me either.

When I pour, I am wearing a leather welder’s coat, furnace gloves, safety shoes, and a face shield and safety glasses underneath. I have not had it happen, yet, but I understand that mold failures are very dramatic. That’s one of the reasons I use a steel tube frame: the stuff can only go down (fine) or up (run) – since this is an open mold, up is not likely – that usually happens with closed molds if there’s moisture in them. Then, you get steam driving the molten metal out the pour hole and it’s kind of like the silver/bronze volcano you wanted to do at your high school science fair, but they convinced you to use baking soda and vinegar, instead.

This is a clip I edited from someone else’s video on youtube. Spoiler: everyone is OK. It illustrates some of the things I am talking about – when pouring molten metal it’s best if you have it low, so there’s no distance for it to fall. It’s best if you have it on something that will absorb a splash even if it costs you money. It’s best if you are prepared to drop everything and haul ass in a different direction, if there is another person present, plan your escape routes in advance so you don’t bump into eachother in the flaming rain, etc.

I am not making fun of those guys; they’re an important lesson, though. One thing that I always remind myself is that the danger has to do with thermal mass. That’s the same problem with a billet of steel that’s at welding temperature: if it bounces and lands on your foot, you can’t “put out the fire” because you need to bring that whole mass below kindling temperature – which may take 20 minutes. The answer is, emphatically, “be somewhere else.” It means overcoming years of human training to catch things that are falling.

Once the metal is poured, I use my blacksmith’s tongs to pick up the frame and drop it in a stainless steel pasta cooker full of room temperature water. I don’t know quite what is going on when you do that, but the steam or thermal shock or something pretty much blows the investment plaster into mush. I wouldn’t do it with a larger thermal mass because who needs all that drama? The resulting former plaster goop is messy but wipes right off.

This is what it looks like after a bit of buffing and some polish. I haven’t really gone after cleaning them up, but you can see how cleanly the detail from the stainless originals was carried through into the silver. 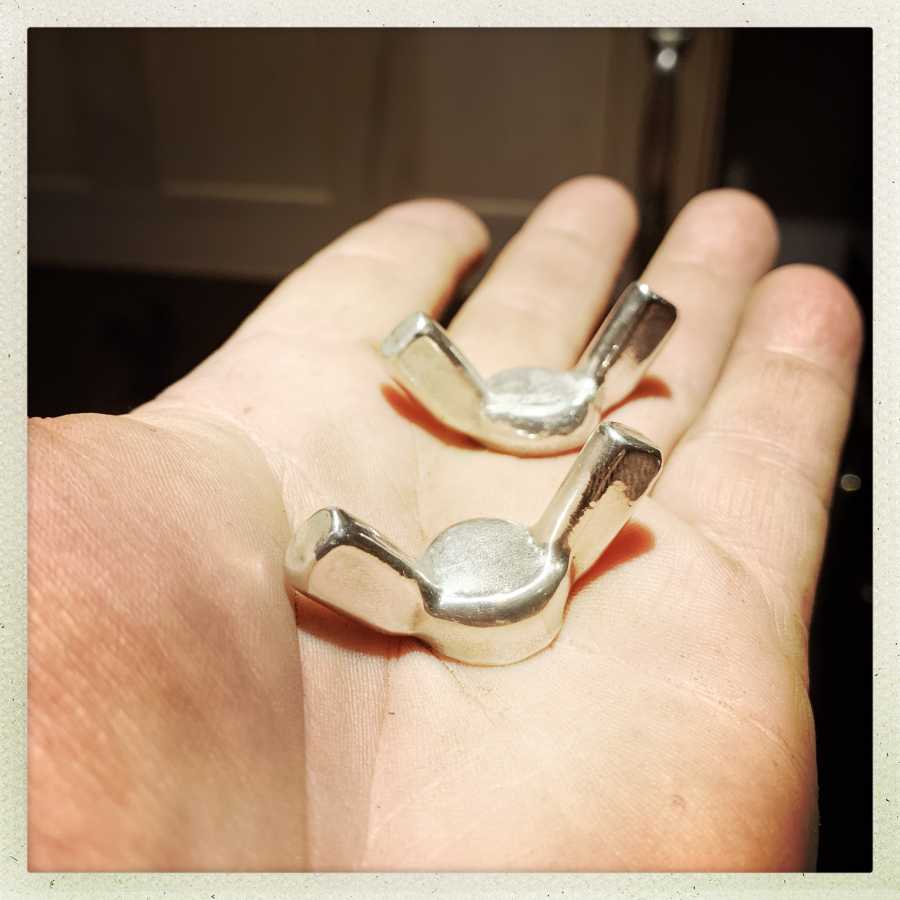 When I was buffing them, the buffer caught and launched one across the room. It took me an hour to find the damn thing and would you believe it somehow landed right on the ways of my wood lathe? It must have hit the ceiling and fallen straight down. That was, literally, the last place I would have thought to look. Because I didn’t hear it ping off the floor (the ringing of silver is lovely) I concluded it must have landed in one of the garbage cans, so I transferred all the garbage – wood scraps and sawdust – to the other can. No luck. This was when I was overheated and exhausted so there was a lot of mumbled cursing.

Next step is to drill a hole in one of those, then tap it with an M6 thread for the handle rod. At which point, the great wok pimping project is done.

Since I worry about the potential for screwing up (or launching) one of the work-pieces, I am glad I made two. If they both survive the process, I’ll either melt down the spare, or I’ll auction it off or something. Perhaps the silver wingnut can become an award for failure to skeptic well, or something. But then I’d have to make buckets of the damn things.