Last weekend I watched a documentary entitled Holy Hell. I think it’s a good companion-piece to Marjoe [wik] if you want to embark on a study of cultish behaviors.

And, to make matters worse, I had just taken a deep dive into Jim Jones cult via the Martyr Made podcast. [mm] To connect the obvious dots, we’ve also got the Trump cult on full display right now. I’ve been doing a lot of scratching my head and wondering “why do people follow these obvious scammers?” Because they are obvious: Jim Jones used exactly the same techniques as Joseph Smith, and St Paul before him, to bind his followers to his will, then slowly pull them from any semblance of reality.

Holy Hell tells the story of the buddhafield cult and its leader, through the eyes of one of the former cult followers. I did a lot of yelling while I was watching it, because the moves are so obvious: the leader used basic techniques of hypnosis to select the most biddable from his flock, and marginalize skeptics, while (apparently) giving some of them transcendent experiences either through auto-suggestion or by slipping a bit of LSD in a drink. His game was pretty simple, at first: he had about 100 followers who fed, clothed, and worshipped him – what’s not to like about that? Then, of course, like pretty much every cult leader, ever, he started having sex with the prettiest and most biddable. Eventually, he was literally and figuratively fucking everyone and someone let the cat out of the bag and half of the followers had a great big reality check and left. The other half stayed with him, and he skipped town in a hurry, went to Hawaii, changed his name and the name of the cult, and spun it all right back up, again.

This is a perfect example, to me, of my dictum that power has no value unless one intends to abuse it. Why else would someone want to lead a cult with 100 adoring followers? The smoothies aren’t that good; you gotta watch for the inevitable signs of tricks such as when the cult leader cuts a few biddable beauties from the herd and goes on a trip, somewhere, for some purpose, with them alone. Later, of course, we find out the obvious.

The cult leader is reminiscent of Chauncey Gardiner, Peter Sellers’ character in Being There – a kind of fountain of vacuosity that serves as a mirror to his followers that they project their own desires and loneliness into. That also seems to be a technique used by cult leaders: you make a bunch of pronouncements that lead the impressionable cultist into figuring out something and it doesn’t really matter what it is because you really don’t care. There are similarities to the techniques used by some “pick up artists” – ‘negging’, etc. When the people in the documentary talk about coming into the cult there’s a lot of “I felt like there was something missing.” And the cultists were there to fill it. It’s just like how altrighties – “red pill” someone. All these techniques are similar because I believe the same underlying cognitive processes are at work.

A bunch of years ago I got fascinated by hypnosis (as a side effect of my study of psychology) and I taught myself how to hypnotize and – more importantly – how to recognize the techniques of mental manipulation in action. I could do a whole posting about hypnosis and how the various forms work, if anyone is interested. For example, there is a trick used in stage hypnosis where the performer lines up their volunteers and gives them an insignificant command, “ok, you two switch places let’s order you by height” then they watch carefully and see which of them reacts with the most obedience the fastest. Stage performers have a ton of techniques they use to figure out who has the most “give” and will be most susceptible to command. When I watched Holy Hell I kept annoying my companion by pointing out the stage hypnosis tricks that the guru was deliberately or instinctively using. To me, that was one interesting unanswered question: whether the guru was a psychopathic narcissist who simply had no clue what he was doing, or whether he was an intentional manipulator who was putting on a top-notch performance. Jim Jones, Saint Paul, Joseph Smith, many of the great psychopathic manipulators leave that question unanswered. In Being There Chauncey Gardener is literally feeble-minded and is acting as a mirror to the needs of the people that surround him; it doesn’t take much to imagine how much damage someone can do if they’re a fun-house mirror, not an honest one.

Other stage hypnosis tricks that you see in the documentary are adroit use of peer pressure and subdivision. Damn, the guy’s good. But is it deliberate or is he just a natural predator? 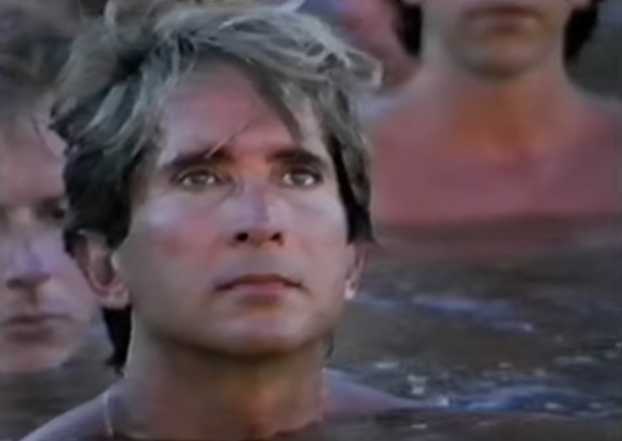 I find that faraway look to be very punchable

He is also an exceptionally good-looking physical specimen. I believe that, in a lot of the documentary, he is taking advantage of people’s culturally-dependent tendency to think of beautiful people as good.

I’m not going to say that Holy Hell is a brilliant documentary, or anything like that, because to me it’s like documenting “water flows downhill!” There is no great conclusion to draw from it, anymore than there is in Marjoe or Being There (which had some great performances and was more thought-provoking). It’s interesting and there’s a lot to find in Holy Hell in the off-chance that you need another bunch of reasons to hate religion and lose respect for human beings’ alleged common sense.

I think the end of Holy Hell is horrifying and it made me want to run screaming off into the night.

I saw Being There when it first came out and I didn’t know that Peter Sellers had a complex history with drugs and abuse, himself. Reading a bit, now, about what he put his wife, Britt Eklund, through – I don’t think I would see the movie the same way, and I don’t think I want to watch it at all.

It occurs to me that Unsettling and Obvious would be a good Culture ship name. Probably for a Torquemada-class fast picket.