No, I’m not referring to proto-fascist conspiracy theorists. This is much more cheerful. I’ve been posting too much about cops beating the shit out of people so maybe it’s time to focus on something a bit less miserable.

I mentioned a while back that Q visited the shop and did some blade making. [stderr] When he was up, I made stir fried green bean curry [stderr] which, naturally, he loved. While stuffing his face he said, “I wish I had a decent wok…” Well, I consider myself something of an expert on decent woks, having purchased one in my entire life (an old carbon steel model, in 1976, at the Hopkins Faire) so I suggested I’d get him a wok. He travels around in his van a lot, and a wok with a propane ring would be just exactly one of the things he needs.

On ebay, you can get hand-hammered high carbon steel woks from China for very reasonable prices – about $35 – so I scored one of those and waited for it to show up. The handle was – meh. It’s some kind of wood but it’s neither soft nor hard and it’s got a boring grain. So began project known as “pimp the wok”. You have probably caught onto a fact, that the way I work is to have 10-20 projects going on at any given time, and I pick up and work on whichever I feel like, based on my mood of the morning. It offends some deep-seated lutheran middle class work ethic that was drilled into me, so I suppose that’s good. Actually, it’s a necessary and inevitable consequence of the kind of projects I do: I’m always getting to some point where I need a part and everything sits on the bench until the part or tool arrives, then lurches forward again. For example, right now the wok project is waiting for a piece of M6 stainless threaded rod, which you cannot simply buy in Clearfield, PA – you have to order it from some seller on Ebay and wait for it to appear in the mail. Which pushes the wok back of the run queue and into a rod-wait state. I have a lot of stuff in wait state, as well as a very deep run queue.

I have a few pictures of making the replacement handle, which I don’t think I will post, since they are mostly a picture of a piece of wood on a lathe, then being center-drilled on the lathe. You’ll just have to imagine a big fat beefy round hunk of rosewood wok handle. Then, you’ll have to imagine that I thought “it needs a ferrule” and wrapped a piece of 20ga silver bar around it, lapped it, and brazed it before giving it a lovely polish. After that was some muttering and cursing as I chiseled the drilled hole square at its throat – there’s a sort of metal block-thing on the wok that the handle slips onto so it won’t rotate in the user’s hand. All of that will eventually be filled with epoxy and shredded glass fiber.

Something needs to top it all off, and it needs to match the ferrule. I.e.: it has to be silver and mildly outrageous. 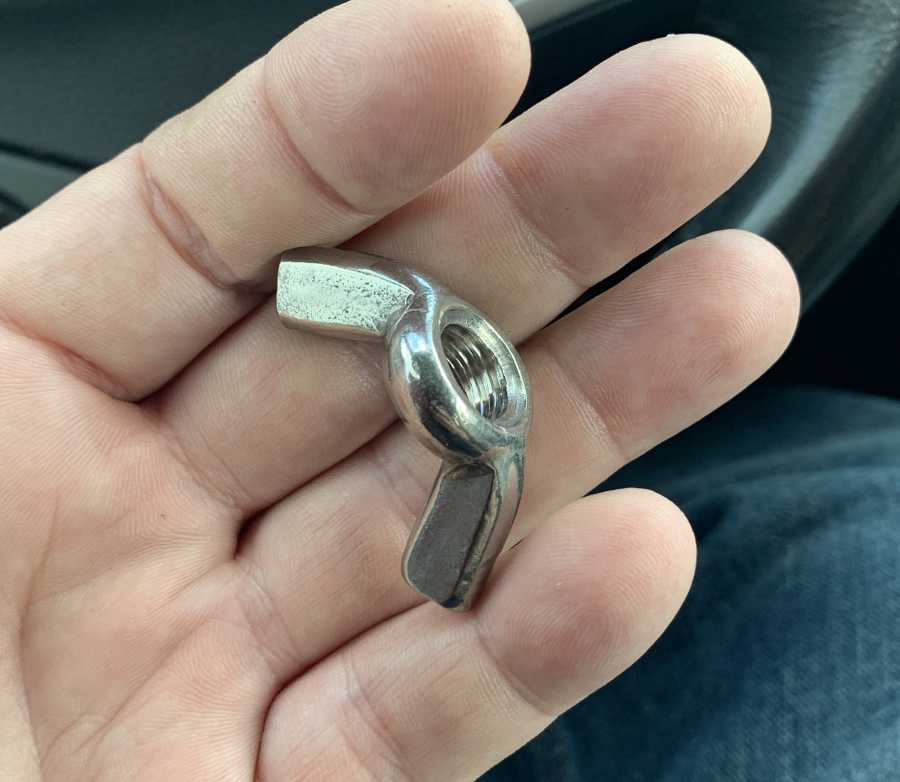 That’s stainless steel. No bueno. It’s also imperial threaded and the wok’s mounting-post is threaded metric. That’s the beauty of standards – there are so many to choose from.

One of the things I love the most about mold making and casting is that you can “remix” an object. For example, I seriously considered taking a disk of wax and a little baby head (who doesn’t have a selection of baby doll heads in various sizes?) and some clay and gluing the baby head to the wax, then filling the inter-space with clay and sculpting it down nice and smooth. When a mold was lifted from that and the result cast in silver it would no longer look like an object cobbled-together out of other stuff, it would look like I had spent actual serious time on it. I hope Q never reads this and says “I would have preferred the baby head.” Anyhow, the threading on the wingnut is going to need to be re-done, so it’s simple: pack modeling clay in the hole, smooth and round it off, and make a mold from the composite, altered, object. 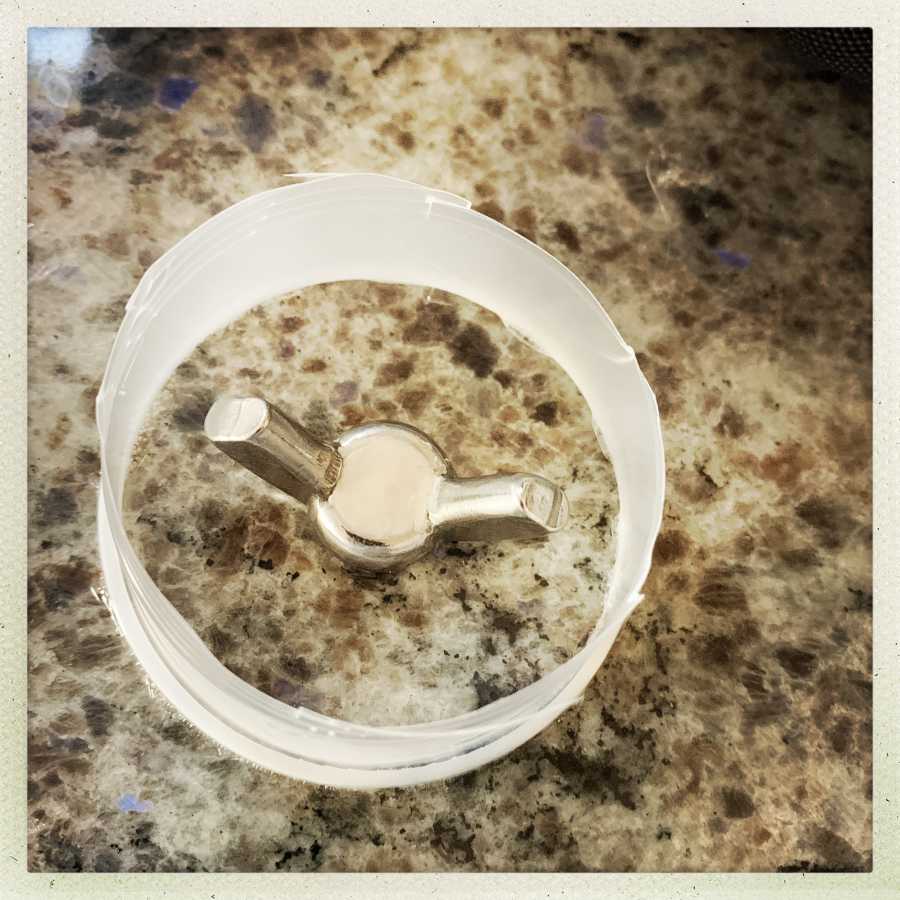 Instant mold frame! That’s a plastic cup that I cut the top off of. Then, I glued the wingnut to my counter-top with some lightweight acrylic glue and glued the cup down as well. After that, mix some silicone and pour it in, let it cure overnight (which triggers moving this project from the run queue to the silicone-cure-wait state). 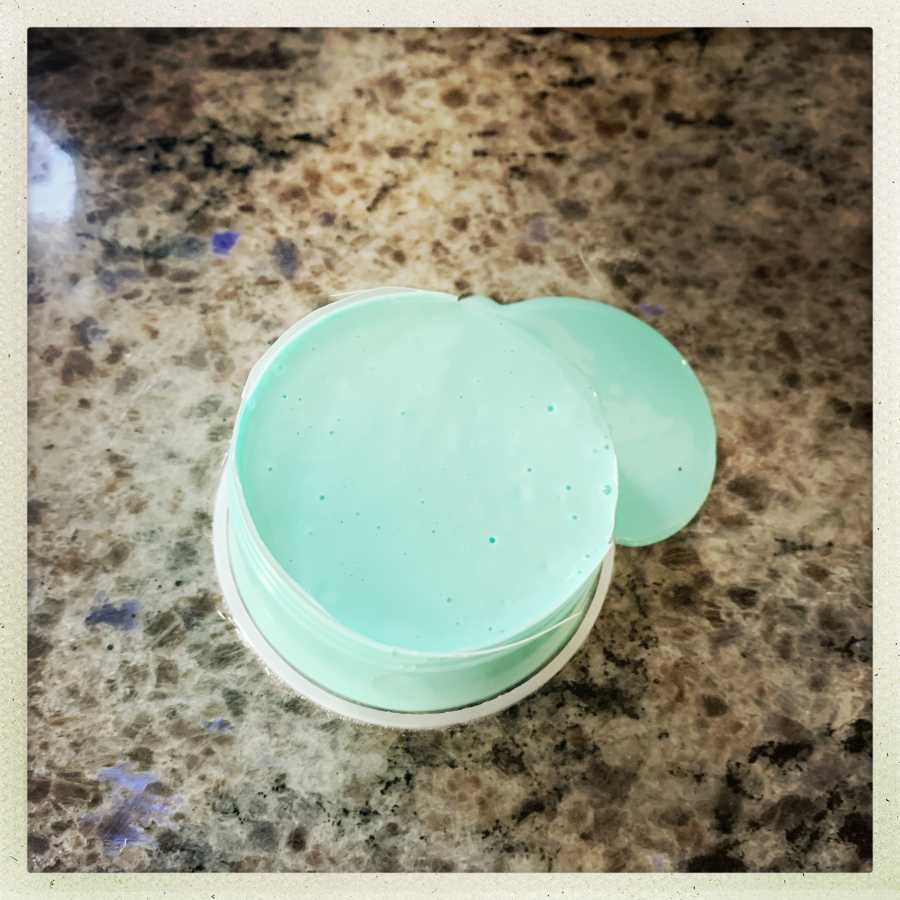 Would you believe me if I told you that that thing that looks like an over-pour is actually there so I can see if it’s cured, by having something to touch that isn’t the main mold? I wouldn’t believe that, so I won’t try it on you. Silicone is sticky stuff that is simultaneously thick and runny, that leak worked its way through a tiny crack in the cup from where I sloppily chopped the top off with a kiridashi.

The next steps aren’t shown. Demold the wingnut by pulling at the silicone to figure out where the wings are, then use the kiridashi to make thin cuts in the rubber sufficient to let the nut come out, but for the mold to still hold together. If I needed a frame to keep the rubber in shape (for this one, I don’t) I’d just use another chopped cup, which I know in advance will fit the rubber perfectly. 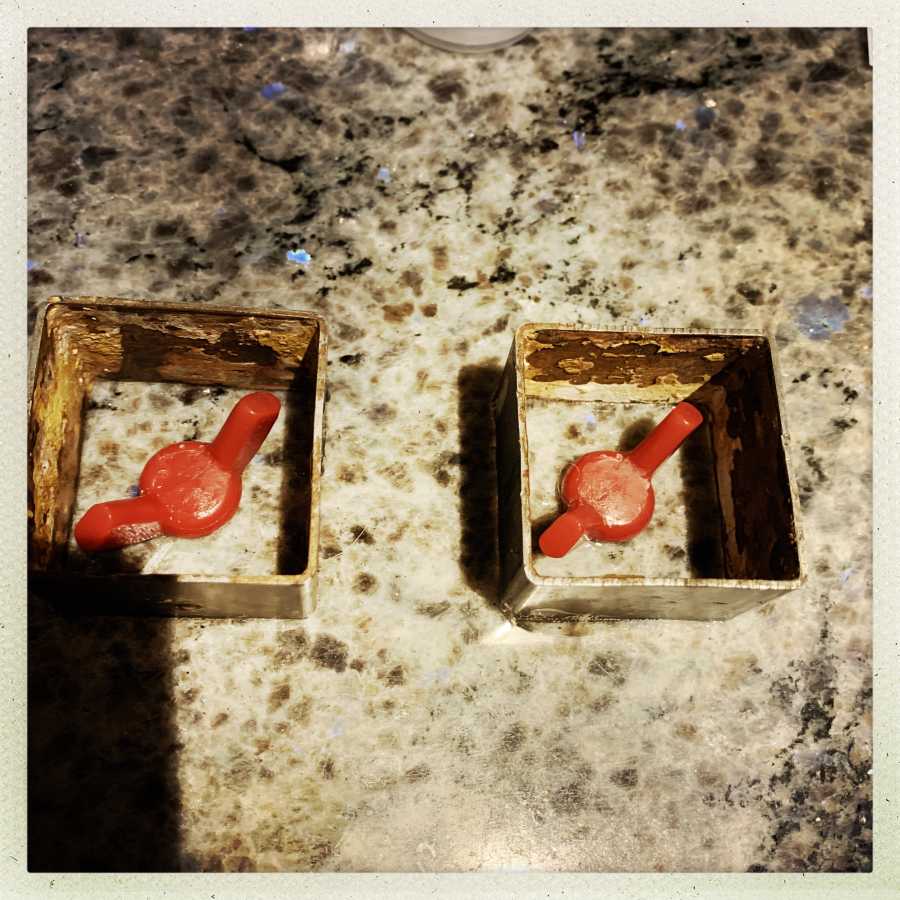 I did two to increase the chance of not fucking up. Look at the way the silicone and wax caught the detail of my thumb-presses in the clay!? Isn’t that nuts? You can actually mold fingerprints with this technique.

The metal frames are pieces of tube steel, liberated from the herd by Mr Happy Dancing Bandsaw, then acrylic glued down to the counter-top along with the waxes. The glue is important here because the wax weighs less than liquid investment plaster and they’ll cheerfully bob to the surface of the plaster and make a Great Mess. That has never happened to me, it’s a purely theoretical outcome predicted by Archimedes Principle and basic physics. 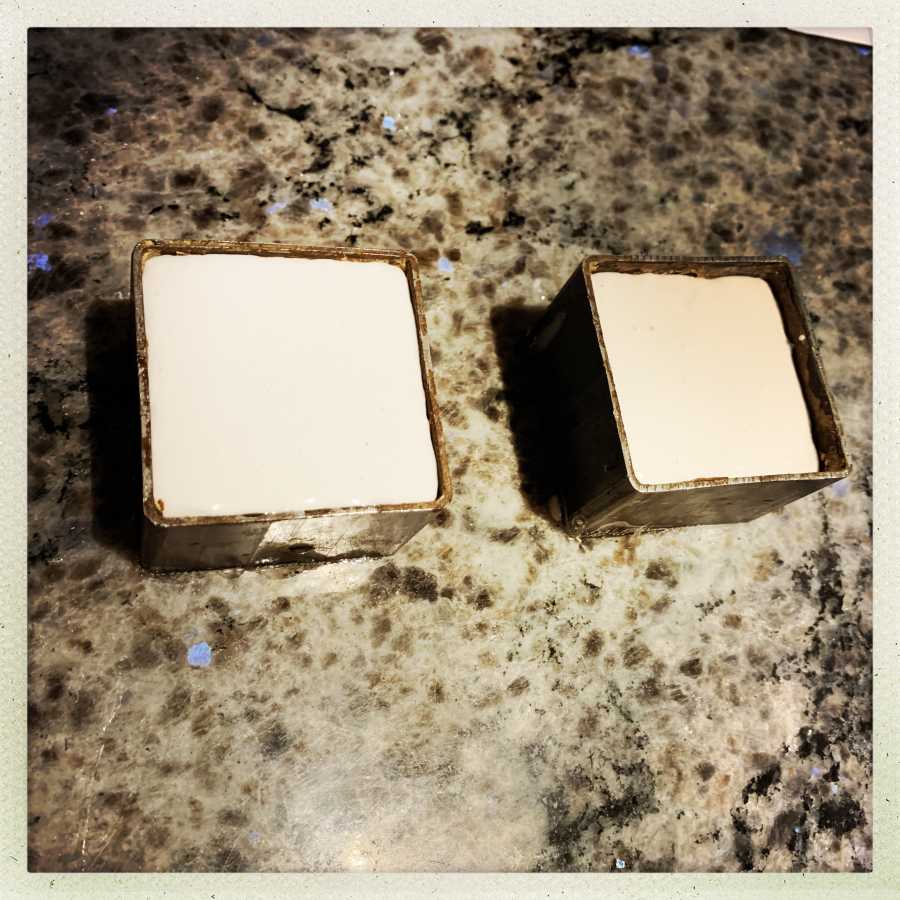 A little investment plaster poured into the frame. Now, I have a wax object in a plaster block in a steel reinforcement. The next step is to get the wax object out – and that’s where the name of this process comes from: “the lost wax process” When I was a kid I thought it was the process that was lost, not the wax. So I’d go through the museum puzzling over, “how do they know what the process was, if the process was lost?” And “why do they have displays illustrating how the lost wax process is done, if it’s lost?” Anyhow. This is a super easy example of an open mold, so I don’t have to worry about air tubes and how to let the molten metal find its level: I’m just going to melt some silver, say a prayer to Haphaestus (I pronounce it “Festus” because I’m an atheist) and pour. I’m also going to be wearing a leather coat, furnace gloves, a welder’s cap, and a face shield because I’m an atheist and Festus sometimes does not protect his worshippers. 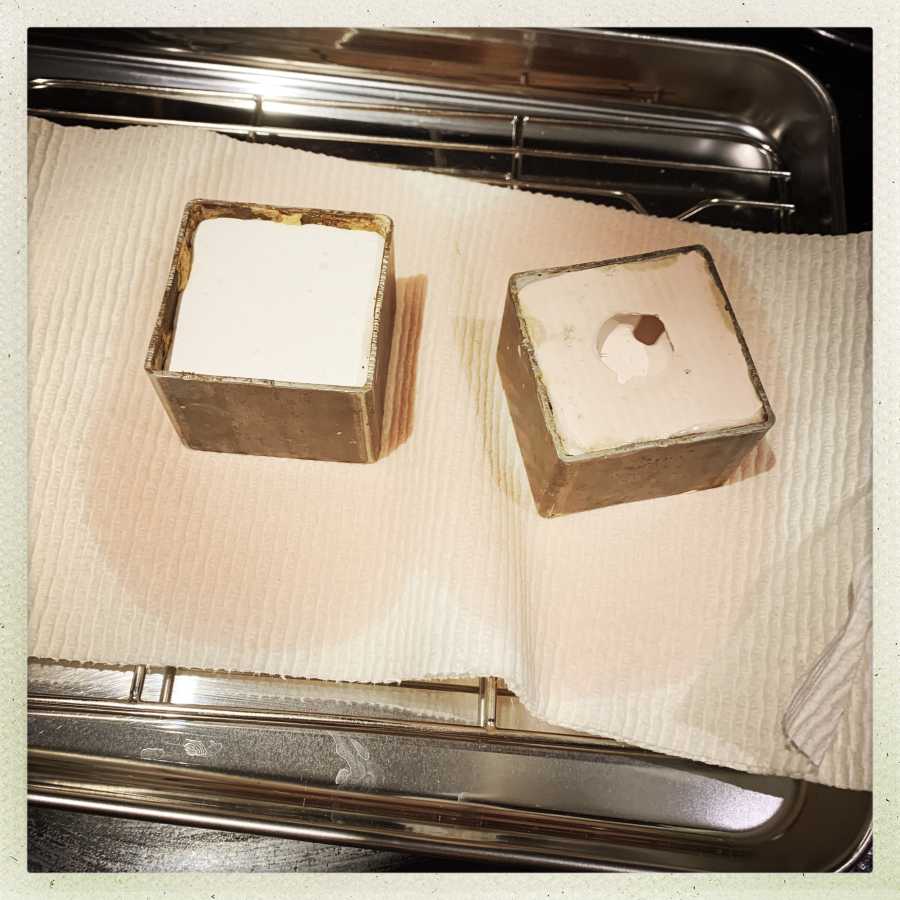 According to Ray Bradbury, the ignition temperature of paper is 451F, which is a ridiculously low temperature, but the wax melts at about 250. So I put the molds in the oven at 350 for a couple hours, face down on some paper towel (which ought not ignite) to absorb the liquid. And there you go!

Look at how beautiful and clean that cavity is! I have some bills to pay, some stuff to box up and ship and then I guess I’ll head over to the shop, where I have a canister of motorcycle chain to weld down for Mike P, and while it’s heating I’ll put a crucible load of silver in to melt. Then, since the forge will be hot, I have a stack of suminigashi to weld into a bar and by the time that’s all done, my day will be over.

It’s been hot here, in the mid and high 80s, and running the forge gets the temperature in my shop up to around 100 pretty fast. So I’m chugging water like Brett Kavanaugh going after a beer bong, and shaking drops of sweat everywhere. Praise Festus!

When the whole wok is done, I’ll try to remember to post a picture or two.

I have a lovely sheet of stainless steel, 16ga 304, which I may try to make a wok ring out of. The question is whether I can cut hot rod flame shapes into it with a plasma jet, or not. Also, rolling the ring to roundness may require a metal roller, which I know the guy down the street has. He can also tack weld stainless, so that’s the outline of a plan.

I have switched to using Rio Grande’s “argentium” silver instead of just buying silver ingots on Ebay. The price is the same, after all, and – you’re gonna love this – I got some Donald Trump 1 troy oz silver ingots to melt down, and when I put them in the crucible they didn’t melt until they hit the melting temperature of aluminum. Now, that’s a bit suspicious, when one of your ingots puddles right up and the other sits there staring at you with a stupid expression on the face chiseled into it. So many levels of grift, I don’t have time to unpack it all, but I think it’s pretty funny. (aluminum bronze is also nice!)