Please give me feedback if these are getting boring for you, and I can stop and spend my time complaining about the F-35, instead. I’m going to do a series of postings about a knife I recently delivered into the hands of its new person, which I am quite proud of.

Usually, when I get a request to make something, I do a couple emails back and forth, trying to expose and explore the various design requirements and trade-offs, and get an idea what they are looking for. For me, that’s half the fun of the process; everything is still completely imaginary and could go in different directions, and it’s not as if someone is going to say “make me one like this” because usually the thing they want doesn’t exist. There are a few things that sting, sometimes: I can’t make a Bob Kramer knife because I’m not Bob Kramer and I don’t spend every waking moment for decades working on making elaborate pattern welds. Some things don’t bear comparison, so what I’m doing is looking for things that will push me in a new direction for me. Right now, I’m working on a commission that has been requiring me to forge weld stainless steel to high carbon steel (a fairly hard thing) and I’ve been having a blast experimenting and failing as I explore something I’ve never done before.

So, I got an email request to make a “sgian dubh” – a Scottish ‘black knife’ – for someone to carry at an event. The traditional knife comes with some embedded design constraints: it should be single-edged, not illegally long, with a specific blade-shape and there are traditional handle shapes. The requestor also dropped an interesting bit, which is that they have no particular clan symbol, but at one point did a great deal of fishing for mackerel fish (a survival thing during hard times) and if I wanted to somehow work that into the design, that’d be fine. I had just finished off R.B.’s “letter opener” [stderr] and was feeling pretty good about my low layer-count twist steel, so I suggested something like:

“For a ‘black knife’ how about a bog oak handle, which is black? And, wavy ocean foam-like low-layer contrasty damascus, and some silver fittings?” 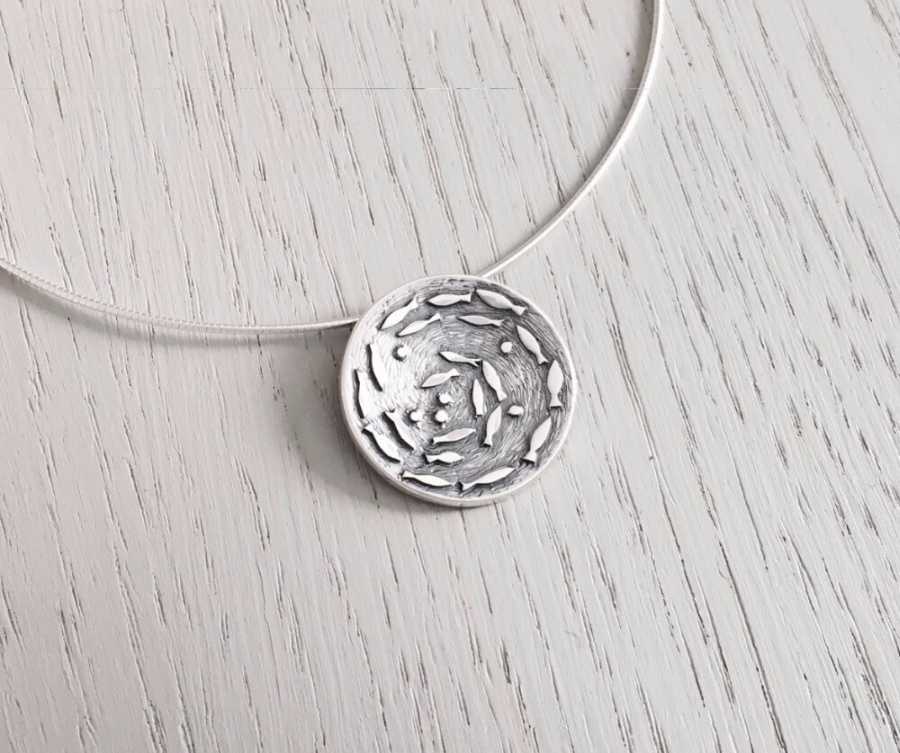 We did some back and forth about whether or not to make the blade and have the fabricators in Clearfield CNC water-jet a fish shape into the blade, but the last time they did that, they put it on the wrong end of the blade and I am not convinced I want to give them something I have spent hours and hours on. Where I left the fish element of the design was that I thought I’d investment cast a silver bolster and cap, with a sort of matte sandy texture, and the shape of the fish cast right into the metal. I started looking at Blender (3D print option, via shapeways.com) and playing around with cutting jeweler’s wax, but mostly I turned to the blade.

When I do a commission, I usually irritate the target by sending them status reports, which is very risky in the case where I blow something up and have to start again. But it’s useful for things like this because I can just pull all the pictures right out of my email archives.

To get a really nice twist pattern, you want to take a chunk out of the middle of a twisted bar, where the welds are tightest and the pattern is swirliest. When I made the twist-o-matic wrench [stderr] I tested it on a pretty good-sized billet that I laid up. That’s 15N20 and 1095, thin pieces stacked tall so I won’t need to cut and re-stack the billet. 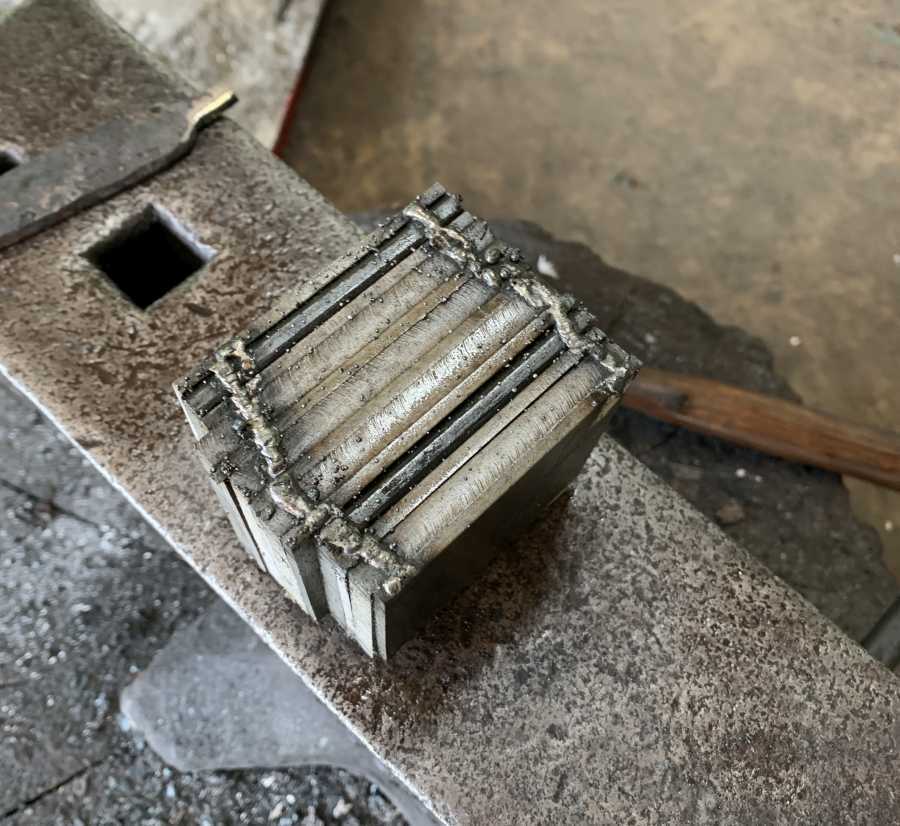 That got pressed back into a square and drawn out, annealed, and cut into chunks with Mr Happy Dancing Bandsaw. 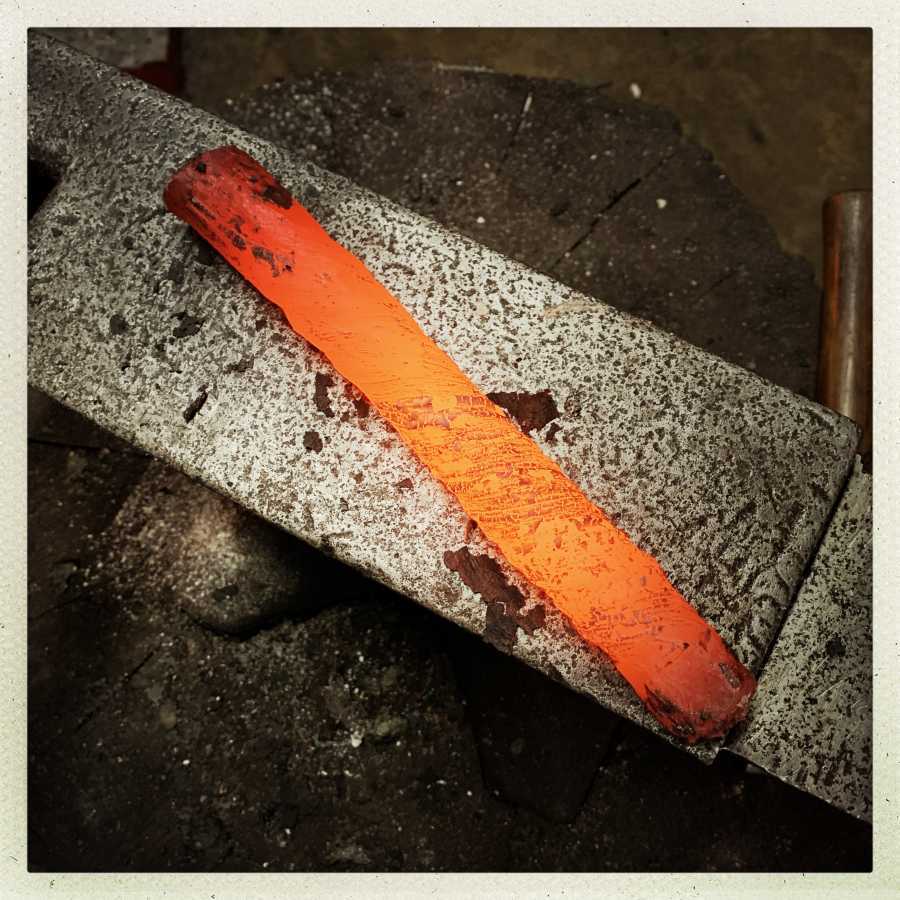 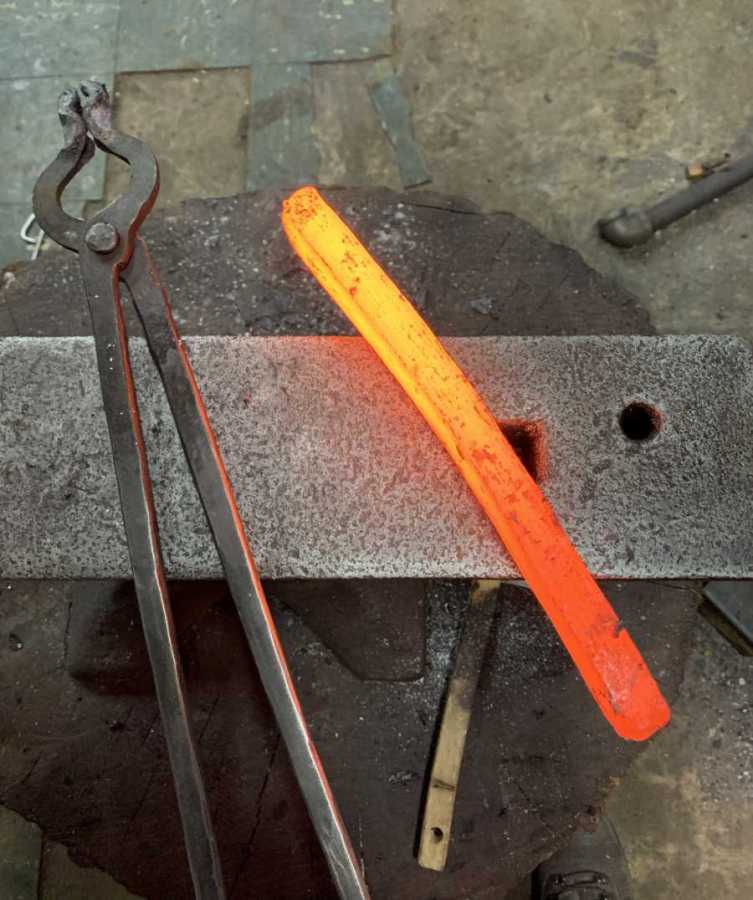 Doing a twist pattern requires that you take a squarish bar, turn it round in the forge, and then twist it so that it stays at welding temperature and doesn’t snap off, then flux it and push it back into a square so the “lips” weld back together. It’s a couple hours to set up a billet and get it to this point.

Back into the forge, a couple days later: 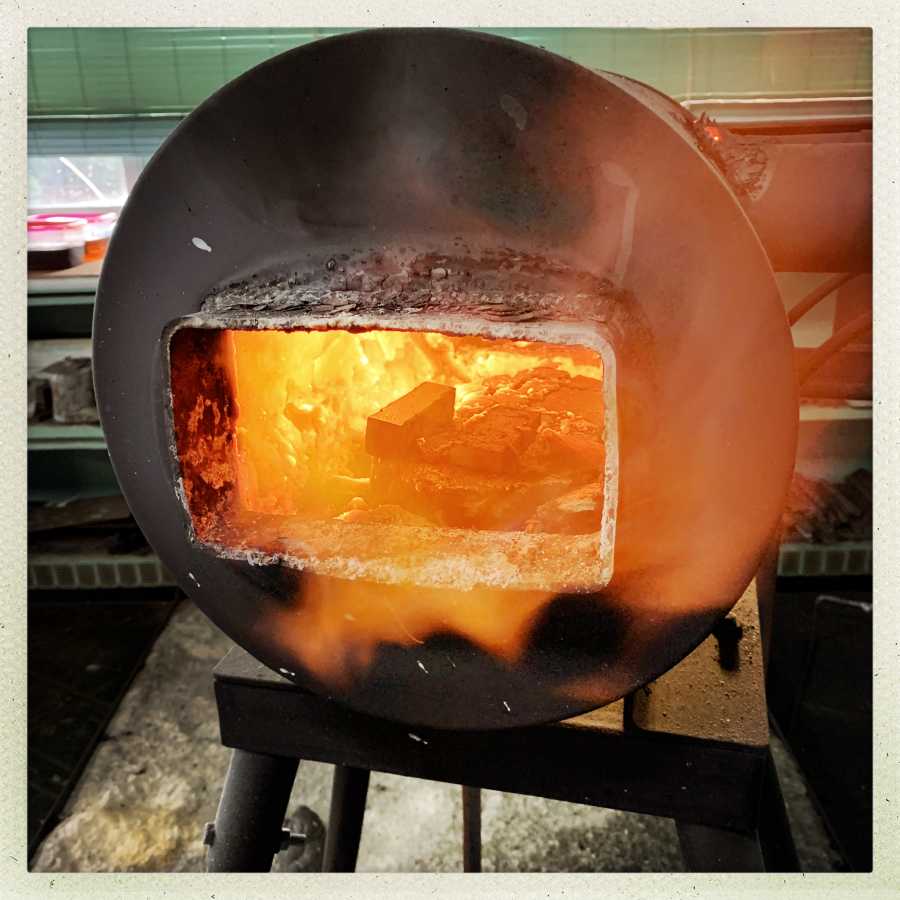 I made two bars; one I was thinking might be useful for the cap and bolster (so I should have steel from the same batch) but I didn’t go that way and used that bar for a paring knife.

Drawing the tang out is the first part where it starts to look knife-ish: 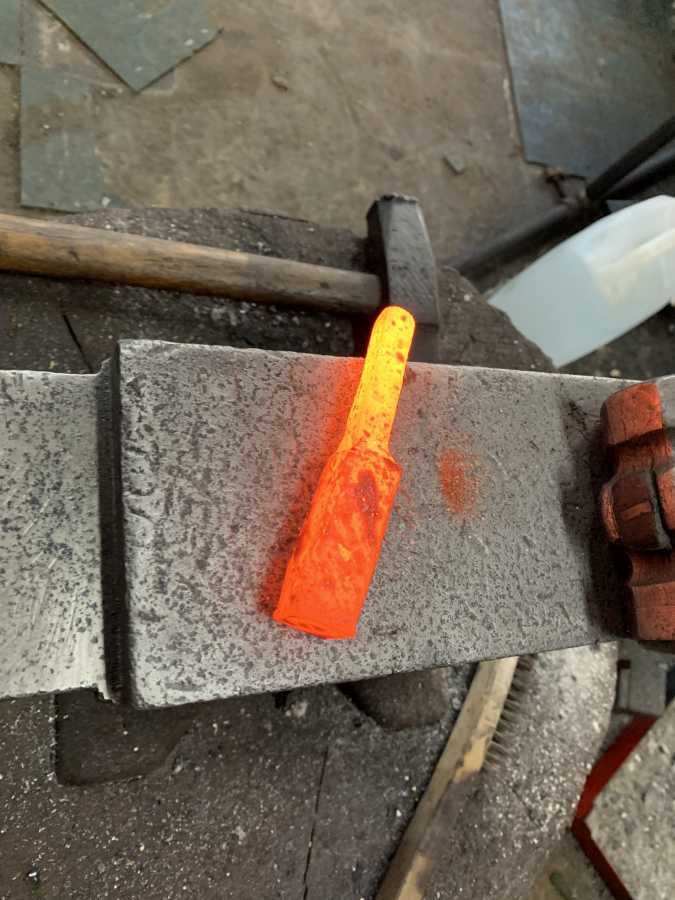 One of the tricks at this stage is to keep the tang in the right place, because it sure is hard to relocate it if you get it wrong. Since I wanted the knife to have a “classic” look with an end-cap, I needed the tang to be long enough to run the entire length of the handle so I could thread the end and screw the cap on.

I switch between pressing and hammering, depending on what feels best. In the process of doing that, I start to flatten the blob that will be the blade, eventually. At this point, the bar is a bit more than 1/4″ thick. That’s nice because it heats up pretty fast as it gets thinner, so it works faster and faster as you get stuck into it. 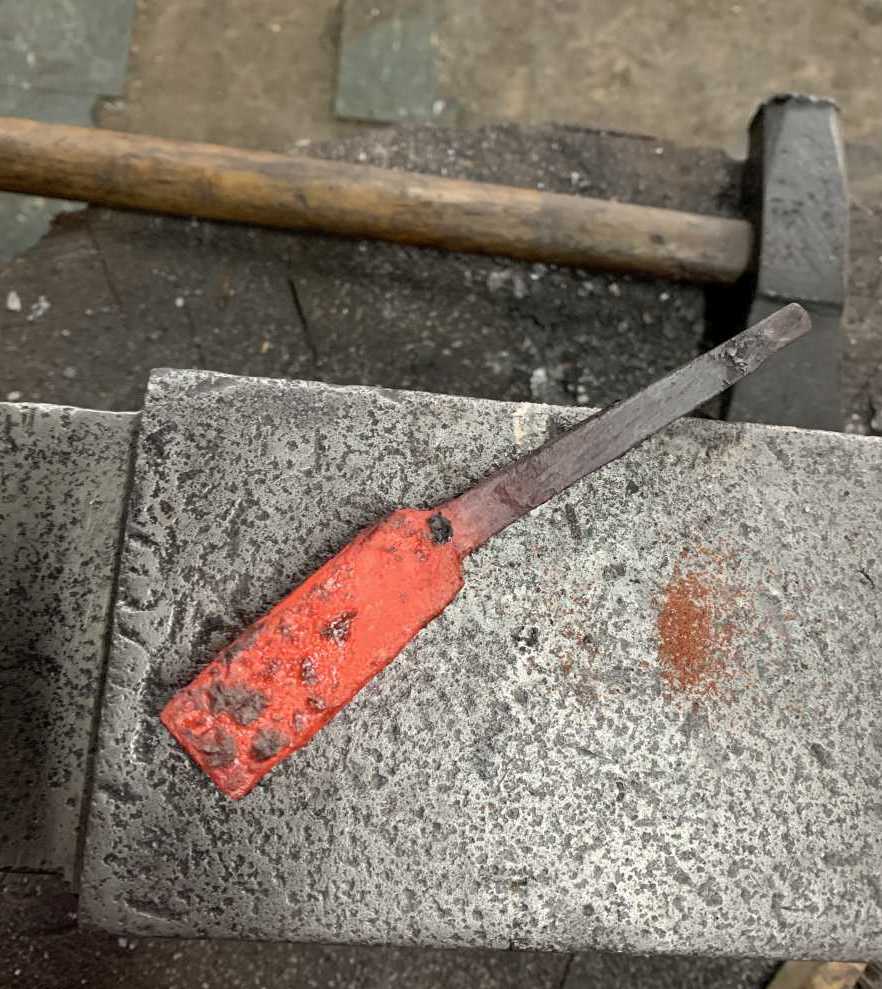 When I do the blade shape I know I’m going to be grinding all of the edges down pretty severely to remove the oxidized outer layers, which is why it’s rounded and thick. 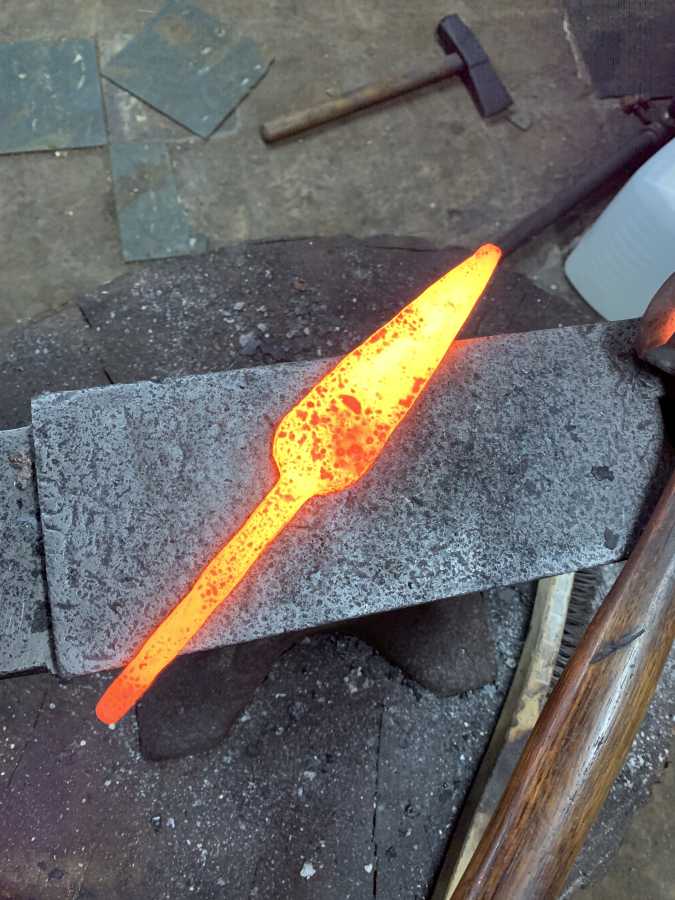 At the point above, I have decided which is going to be the edge (you can see the tang is slightly offset) and the rough dimensions of the blade at not going to change much. I can see I’ve used the hammer a bit to thin what will be the edge and knock some metal down to form the heel of the blade. For me, this is “fine hammer-work” but if you watch someone like Bob Kramer do a blade, they pretty much hammer it out so it’s basically perfect.

By the way, taking a blade out of the forge and putting it down on the anvil to photograph it sucks the heat right out of it. But I love the pictures of steel at welding heat so I waste a bit of time and propane to get pictures.

After that’s done, it’s time to leave it in the annealing bin (a steel garbage can full of pearlite) so it can slow-cool and relax all the stresses I just hammered and twisted into the metal. From here on it’s going to be grinders and sanders doing the work, and the blade will only go back into the forge to be quenched. 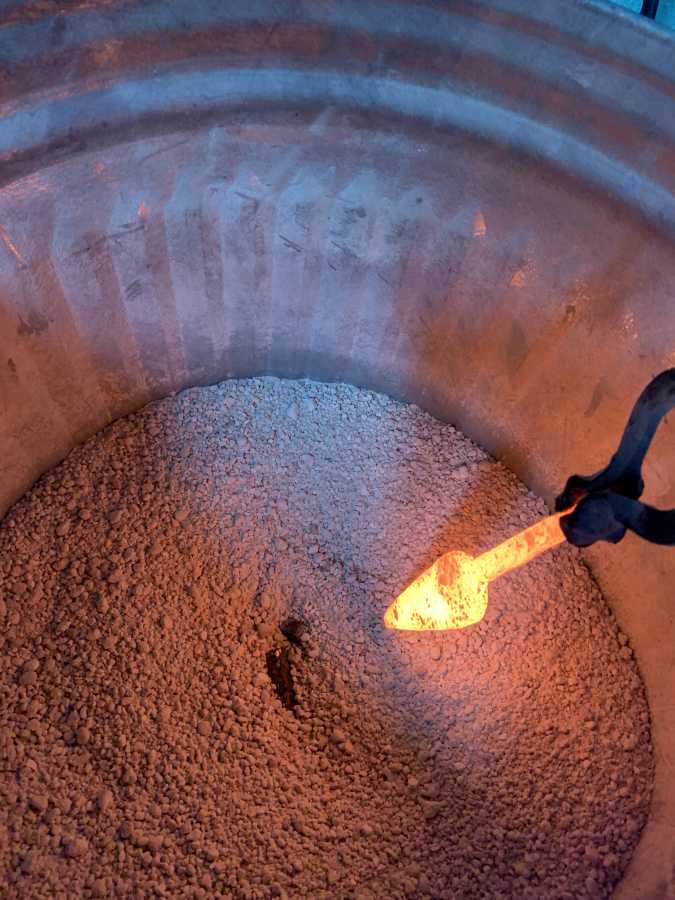