Where I left the damascus-twister, it was mostly an idea and a pile of parts. 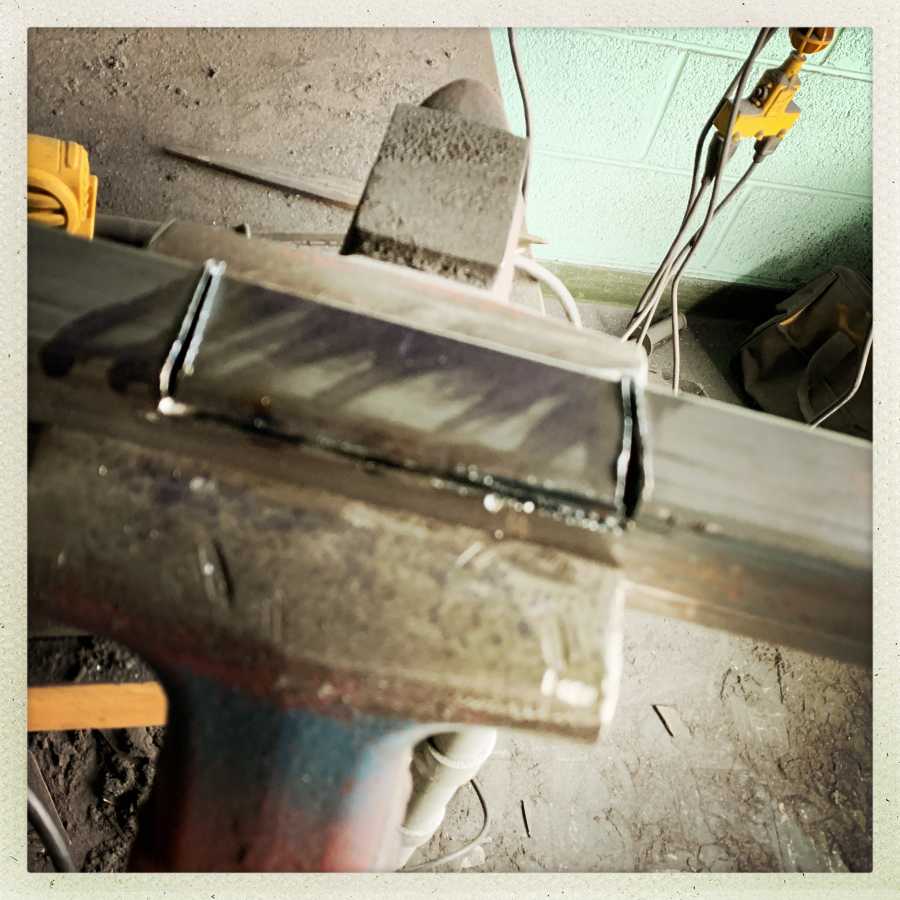 oh look it’s out of focus!

That rough cut, done with an angle grinder and a diamond wheel, was painful to look at. At some point or other I thought, “I should have someone do that on a milling machine.” Oh, wait, like the milling machine right behind me?

It didn’t take any fancy machining; I just cut a rectangular box with straight edges and it was amazing how much better it looked after that. 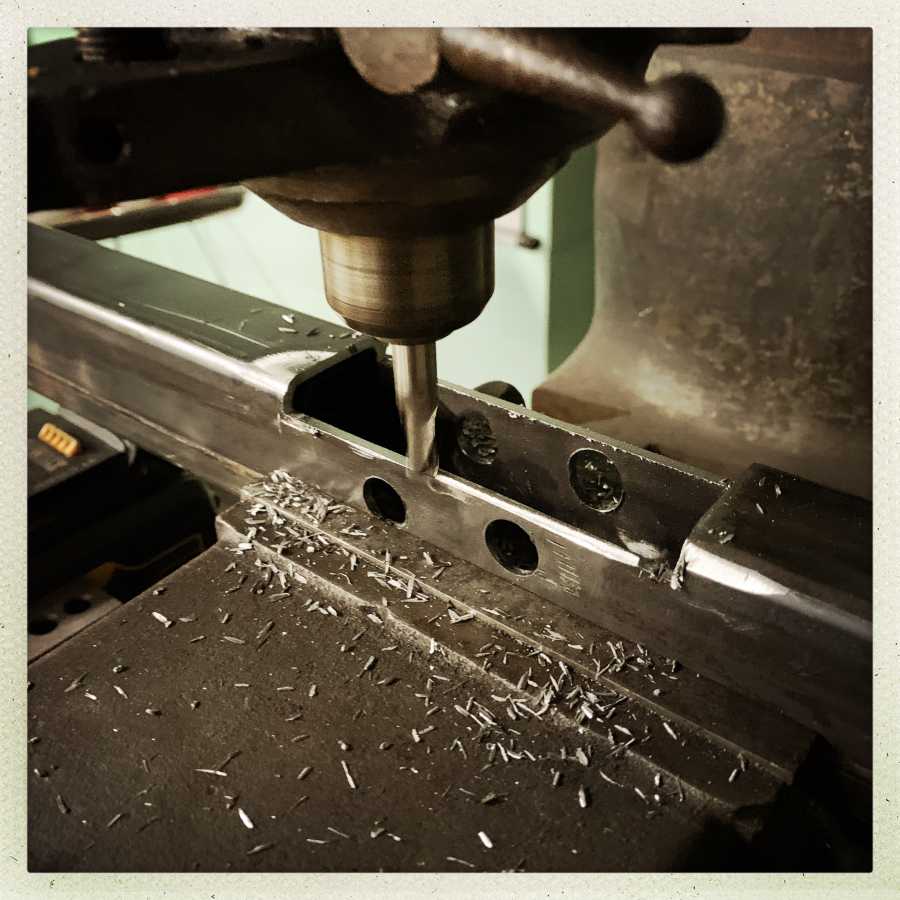 Mild steel responds well to a wire brush and some WD-40. If I had been clever enough to just use the milling machine in the first place, and not run around chopping chunks out of the metal with an angle grinder, it would look “professional” but instead maybe it looks “rugged” or something. [Actually it speaks to my subconscious saying “be careful there might be razor-sharp edges in this piece of sloppy-ass thrown-together kludgework”] 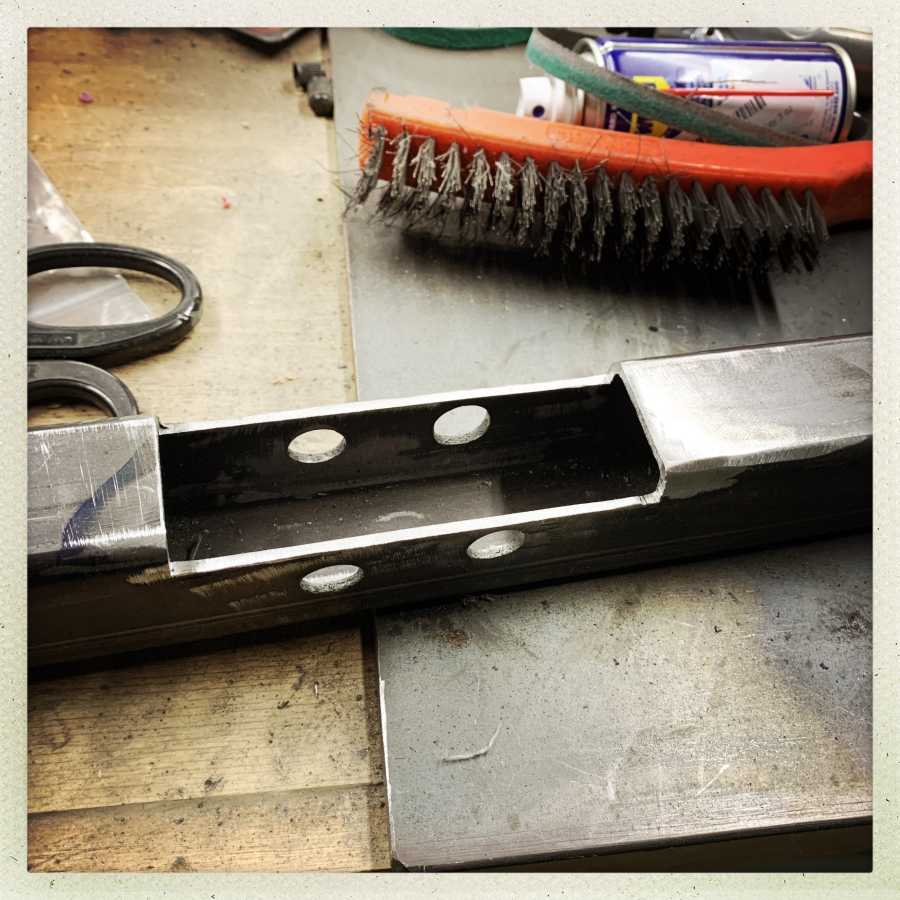 As you can see, I’ve drilled holes for bolting the head into the bar, and it’s waiting for me to make a run to the bolt library at Ace Hardware in Clearfield; in my pocket I carry a bolt of the right size (but wrong length) with the correct length scratched onto it with a carbide drill-bit. I have a nice pair of Mitotuyo calipers for measuring stuff like that, but if I can eyeball a thing, that’s how I’ll probably do it.

This is how it call came together: 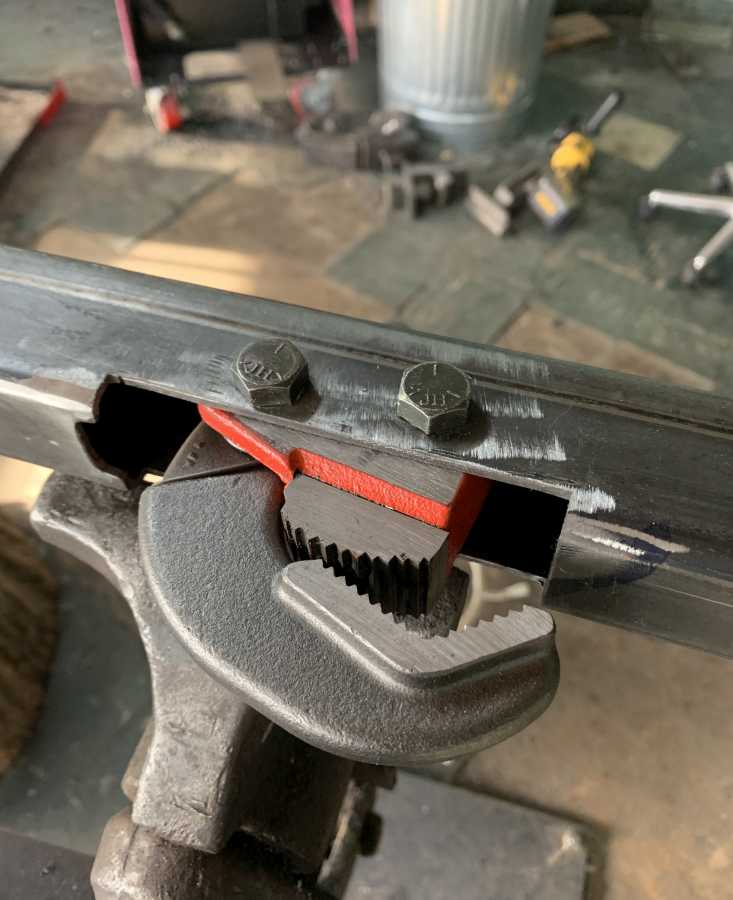 I could have trued the wrench head up a bit with the milling machine but I just hit it on the belt sander and made it flat until it slid nicely into the housing. So, that’s it!

The next part was hard(er) – in order to test it properly, I had to whip up a bar of damascus to twist. In the past, when I’ve twisted a bar using a wrench, the thickness of the bar has been limited by the leverage I can apply. In this case, I am assuming I have a lot more leverage, with that great big 4-foot lever. (I guess technically that is 2 2-foot levers) I’m ballparking that at a 24:1 mechanical advantage, which means that I can put about 4,800lb of “oomph” into my twist – that’s why I made this thing solid; I do not want something to snap and send me flying into my work-piece face-first, or stumbling around the room in a random direction. Actually, I am most likely to snap the welds on the post my vise is mounted on, which would also be bad.

I made a smallish stack of 15N20 and some 1095 and tacked it together with the MIG, then fluxed it and put it in the forge to heat for about a half hour. After that, I started pressing it with a drawing die, squashing it into a longer and rounded thing about an inch in diameter. 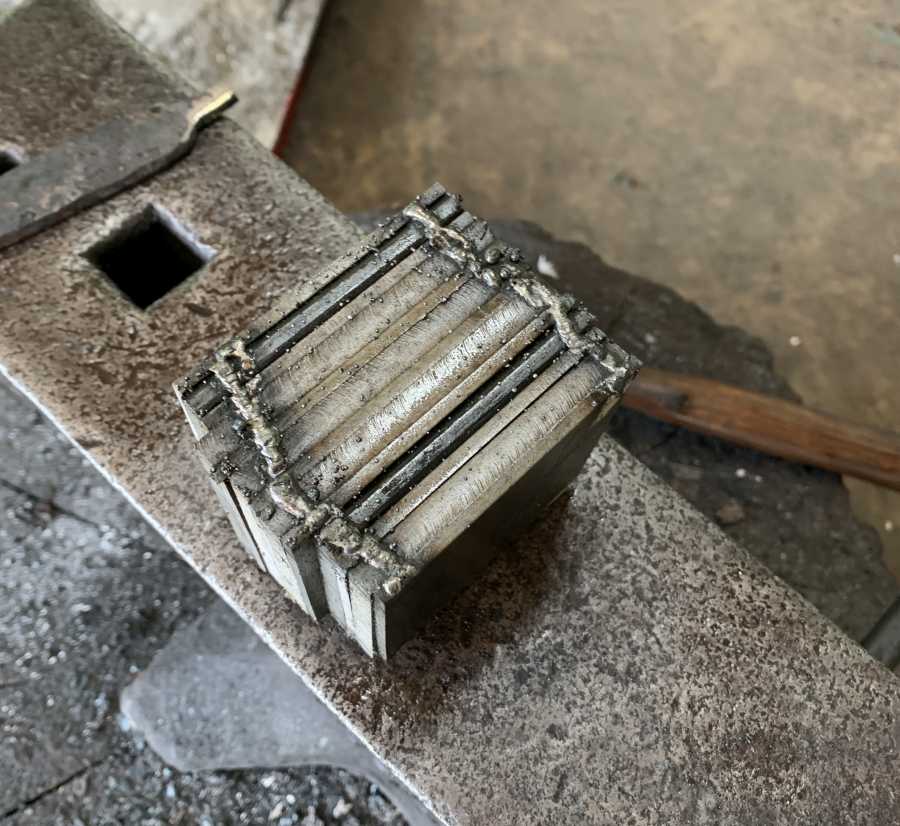 The welds don’t have to be particularly good; they just have to hold together until the first couple compressions, after which the stack will be on its way to becoming a bar that is a single piece of steel.

As I was doing this, I had time to think, and I realized that twist damascus was probably invented as a way of making sure a piece of steel was homogenous. If there are missed spots in the weld, they are going to come under tremendous pressure when the steel is twisted; they might stick. Or, if they don’t it’s not as if the piece of steel is going to unwrap itself under anything less than heinous pressure. A knife-wielder does not need to worry about a piece of twist damascus untwisting on them – they’d disintegrate first.

I set up a camera, and wrapped a go pro around the bar, and gave it a go.

Everything worked perfectly. It twists so hard that I did worry about my vice’s grip slipping. The spring-loaded one-way catch on the wrench piece worked wonderfully – I did not need to fart around getting it to grab, and to ungrab, I just gave a little turn the other direction, while lifting slightly, and it unlocked.

Reminder: be careful not to put my belly up against the yellow-hot bar. I also like the fact that the lever-bar sits between me and the hot metal; if the hot metal takes a hit and comes free, that could be very helpful. And I also noticed that digital cameras appear to pick up some different part of the spectrum; they don’t record the bright yellow bar correctly and turn it a sort of evil purple color. 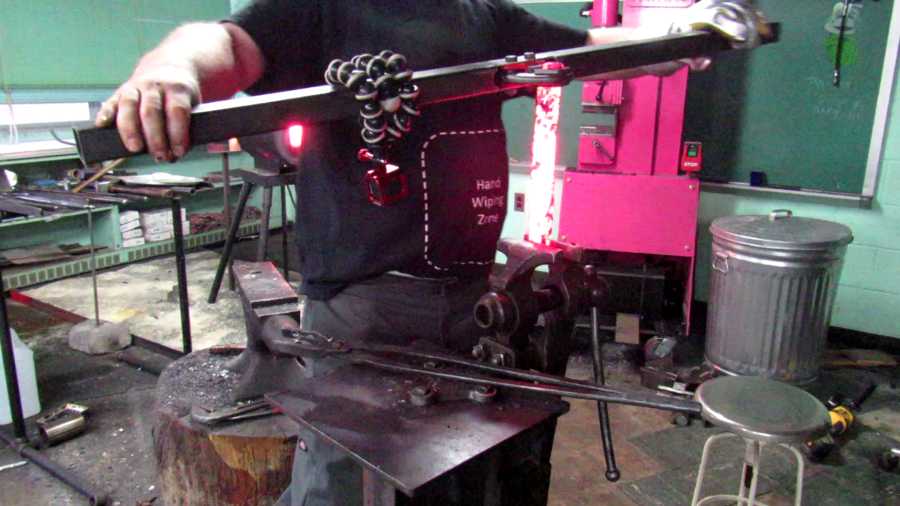 The jaws of the wrench came through OK; they got hot but the steel facings held up fine. Perhaps if I were doing big production runs of twist, heat build-up would be a problem.

End result: a 1″ square bar, 12″ long of low-layer high twist damascus. I think I’ll saw it up into a couple pieces and turn those into wood-turning chisels. To do that, I will make my own die for the hydraulic press, so I can squash a steel bar into a curved gouge-shape.

Elsewhere: the suminigashi bar that I made to serve as the support for a carbide cutter has turned out to be ridiculously tough. I blew up a half-dozen drill bits trying to make an impression on it, and finally resorted to heating one end to red hot and drilling it while it was hot. That succeeded but the drill bit was mostly melted. I let the bar anneal then cleaned the hole up with a new drill bit and proceeded to snap an 8/32 tap off in the hole: it’s not just undrillable, it’s untappable. I may give up on the idea of using fancy damascus for the carbide rake; I have some nice clean 1/2″ x 1/2″ O-1 tool steel that would be a lot more tractable.