In a recent posting, I described a situation involving a few pounds of epoxy and a steel pressure can. [stderr] Commentariat(tm) agent MattP (must mock his crappy brain) suggested a cross-bar and a threaded rod, and I liked that idea.

I’m very familiar with the sometimes-unexpected mightiness of epoxy and was worried because we’re talking about nearly a square foot of surface-area for it to grab onto. That’s “a lot” – I’ve seen major projects hold together for 40 years on less – so, I went a bit “overkill” (I know you’re shocked) with the rod and bar and everything. I have lots of cut-off steel tubing from the forge table project [stderr] so I picked a chunk I knew would not bend easily, drilled a 3/4″ hole through it, cut a piece of 5/8″ threaded rod, and – for good measure – used a bunch of West System G-flex and another piece of plywood to sink the rod into the plywood and resin. 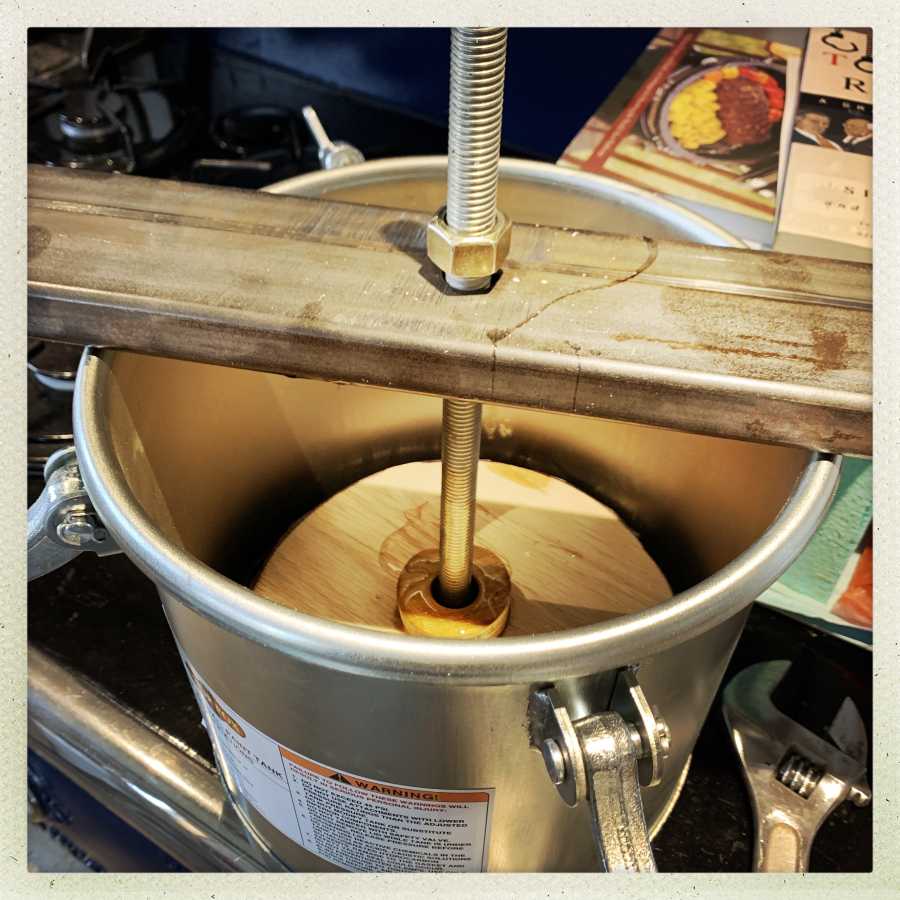 If you look at that and mutter, “something’s gonna give…” you are forgiven – that’s exactly what I was muttering. Since I have time, I gave it a couple of days to cure and even topped off the air-space in the hole with more resin, because why not?

Place your bets! What do you think happened? Remember: there’s a big silicone pan at the bottom of all that, so the binding surface of the epoxy has a fault-line where the silicone pan-edge touches the can. The can is pretty heavy duty – it’s a pressure pot, after all – it’s 16-ga steel. And the cross-beam and threaded rod are also non-lightweight material. You can see the large crescent wrench sitting next to it; that was the first torque-tool I planned to use.

Actually, it popped out pretty easily. I started wrenching away and there was a woody-sounding “snap” and the nut was turning freely. I expected to see the threaded rod had ripped the entire top off the plywood, but, nope: 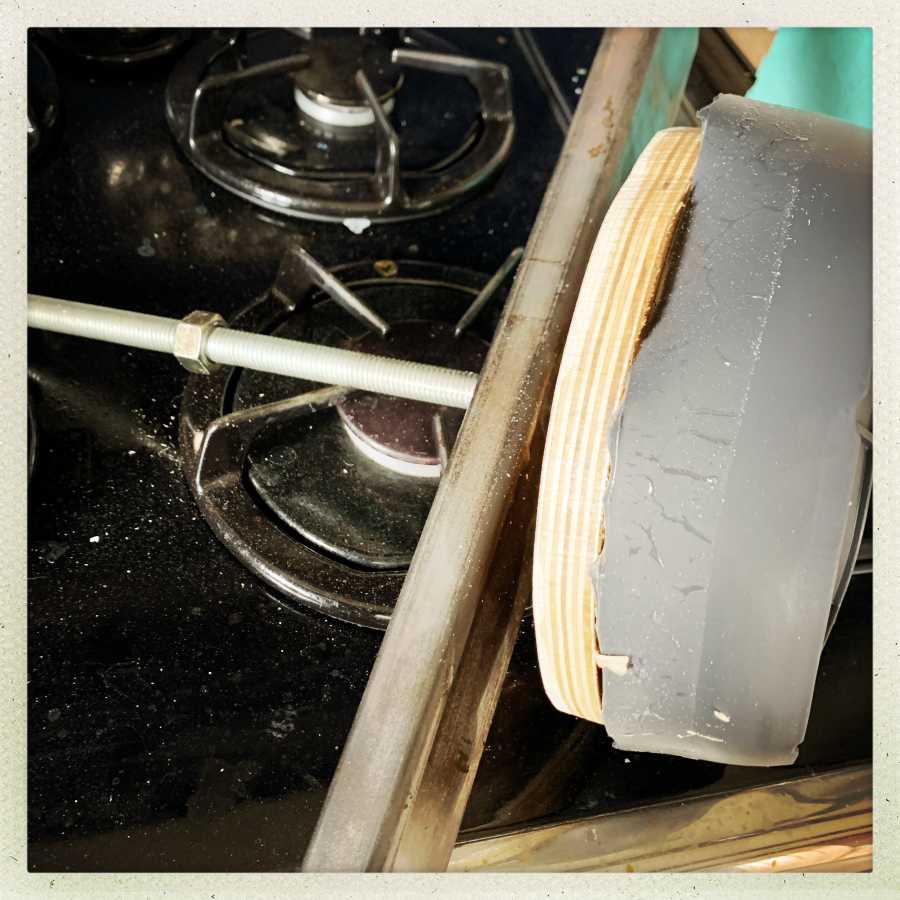 I looked down into the pot and it’s not bad, really: there’s a 1/4-1/2″ ring of epoxy around the bottom and a textured epoxy floor. It’ll still be usable though I am going to have to remember to put parchment paper under anything with adhesive that goes in there; the epoxy ring is basically a grab-point for new trouble.

The silicone peeled right off, and now I can’t wait to get this thing on the lathe. Best of all, I have a really solid plywood mounting at the top that I can grab with the lathe chuck. 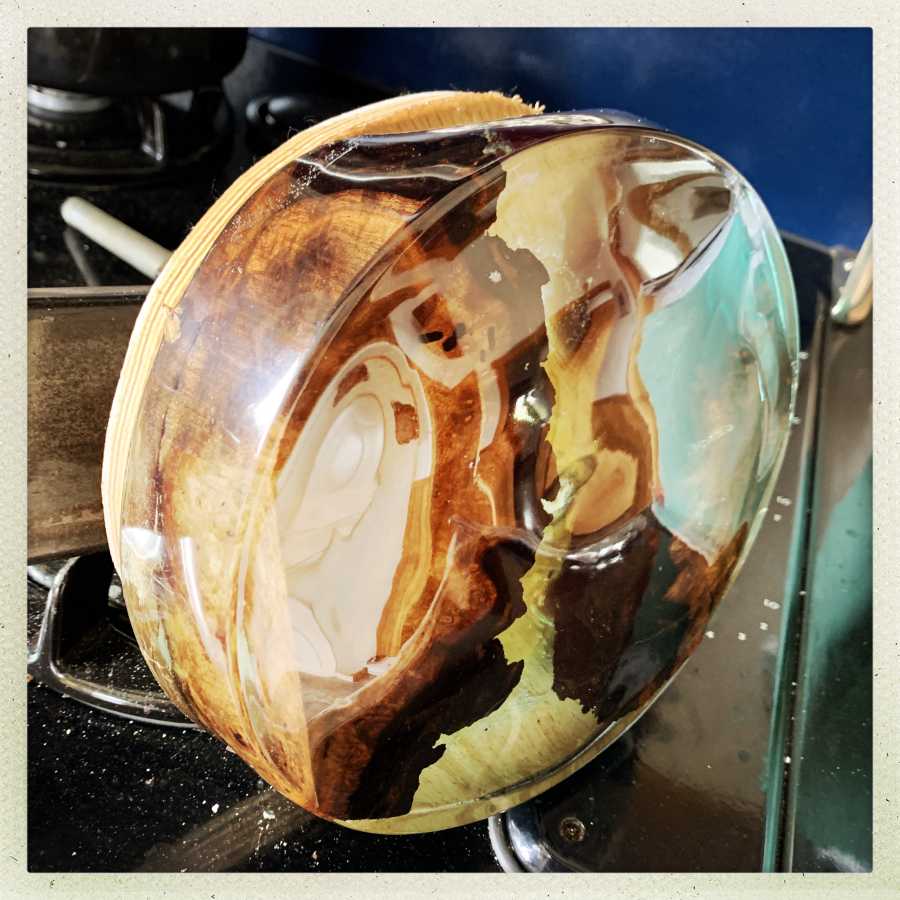 Since I am a righteous scientismist, I don’t believe in being “jinx”ed so I don’t feel I am risking anything when I discuss my plans for this object: I am going to try to lathe it down into a sort of rounded lenticular shape, centered on the wood-edge. That sounds pretty vague, but then that’s how most of these projects go: vague input, vague output, vague output allows me to be accepting of a wide variation of outcomes. As Buckaroo Banzai says: “if you don’t know where you’re going, how do you know when you get there?”

I probably won’t get this thing on the lathe for at least a week, since I am busy with many other things on my TODO list, but I’m comfortable predicting you’ve not seen the last of this thing.

Do any of you know those screw-topped flip-over catches are on the pressure pot – what are they called? I want to get a couple of them and use them as door-latches for my forge but since I don’t know what they are called, it’s hard to search for them. I had a similar problem finding out what those ratchet handle bolts are called (I wanted to replace my wood lathe’s rest-bolt with something a bit more positive) – once you know what it’s called (“ratchet handle bolt”) then it’s easy to find them, otherwise you’re rummaging through google image search trying different names and seeing what comes up.

I have noticed that “water clear resin” has a quality range to it. Some of the stuff I’ve seen billed as “water clear” hardens with fog or lots of bubbles. Slow-cure is definitely the way to go, but I’ve learned not to buy the cheapest stuff on ebay. This is “Art Resin” slow cure, which takes 24hr to cure, but is absolutely gorgeous, very strong, and – most importantly – does not shatter like a glass bomb when you hit it with a chisel on the lathe. Since I try to be safe with the lathe, I don’t wear a sleeved shirt or gloves, and razor-sharp resin chips hitting your knuckles at speed is no fun at all let me assure you on that score.