I’m so disgusted by the way Americans will jump up and start waving flags as soon as “war” ideology is deployed. The “war on the coronavirus” just means that Trump’s bone spurs are going to act up again and he’ll have to spend his time being driven around in a golf cart until he feels better.

It demonstrates the power of propaganda, that you have a nation of millions, which can be moved into action by beating the snare-drums and tootling the flutes. I used to say “they think we’re so stupid” until I realized that: we are. They are right. Right now it’s confusing as hell because we’re all watching the coronavirus – as we should – but while Washington is struggling to figure out how to prop up the economy with a hand-out, ignored are the wiser people who have been saying for decades that the way to have a strong economy is to have a strong working class – you know, a strong working class that is protected from things like the coronavirus? The stock market collapse is a result of the market going, “we can’t keep the facade on this potempkin village indefinitely because good facades are expensive and the capitalists want their slice of the facade money.”

Notice how it’s always “their slice”: the presupposition is that they are owed a slice – when, in fact, their role is more like mobsters who show up and say, “hey, we control the means of production – if you want to exist in our world, you gotta suck it up, buttercup, and pay our vig.” Which amounts to a cyclic shearing that happens whenever things have been going OK for an extended while and we discover that the “going OK” was being relentlessly undermined to monetize it more thoroughly.

I endlessly rail, here, that no politician can be taken seriously when they talk about how there’s not enough money, unless they are willing to talk about the military. The US ponied up (or, rather, our leaders committed us to) for endless wars costing trillions of dollars – a bipartisan effort, I must add – with hardly any hand-wringing over money. But they immediately shat down on the “green new deal” because it was “too expensive”. Then, they turned around and let Trump throw billions more at the defense department so he could use it as a personal slush fund for his stupid fucking wall, which is an ugly concrete and steel manifestation of the man’s teetering ego. The coronavirus is bad news, there is no question of that, but what they are preparing to do right now is economic stimulus in the form of throwing buckets of paint at the facade of the potempkin village and hoping that some of it sticks.

Some of it will stick, inevitably, and they’ll point at it and go “see!?”

In the meanwhile, I guarantee you that the shenanigans we see: senators selling stock based on warnings of coronavirus [stderr] are going to turn out to be chump change compared to how they are about to spend this trillion-dollar coronavirus “bail out” – when congress gets the idea that they can do some deficit spending, they immediately invite the lobbyists in to pay their respects: “hey Boeing, how many votes can you round up?” And, of course they know where the money is going to go. Do the math: the market’s down 40% or so, which means that whoever’s positioned correctly to catch the bounce, is going to probably double their money in under a year. Meanwhile, you’ve got useful libertarian idiots talking about “Free market” as if there has ever been one that’s not being manipulated like crazy by the ruling class. The coronavirus “bail out” is going to amount to the senate (because nothing will get through the senate that the senate doesn’t like) deciding who survives and who doesn’t. There is literally no way that’s going to come out as anything but “the rich get richer and we reduce the number of poor through attrition.” I.e.: they die, they’re not poor any more. 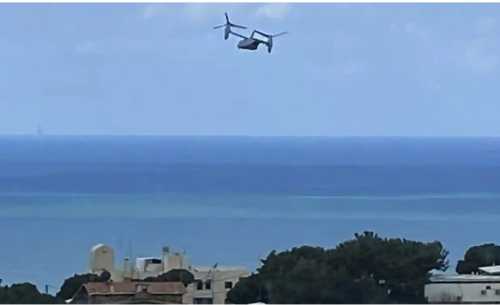 Don’t forget, as they argue about the bail out, that these are the same jackasses who sneakily approved $1 trillion for new offensive nuclear weapons and who have not seen a covert war or area bombardment that they didn’t approve of. Want money for the coronavirus “bail out”? Get the US out of Yemen, and we can even save by not having to spend tons of money rescuing the US’ supply of high profile war criminals. What? [guard] You won’t hear about this in the New York Times:

A US citizen detained in Beirut on accusations of overseeing torture and murder at a southern Lebanese prison during Israel’s occupation of the region has been spirited out of the country by helicopter.

A Lebanese military tribunal ordered earlier this week that Amer Fakhoury, 57, be released after it ruled too much time had passed since his alleged crimes. It was not immediately clear whether he had been released, and a military prosecutor filed an appeal against the decision the next day.

The US secretary of state, Mike Pompeo, announced on Thursday that Fakhoury was “returning to the United States where he will be reunited with his family and receive urgent medical treatment”. His family says he has stage-four lymphoma.

The Guardian understands Fakhoury was picked up from the US embassy in Beirut’s northern suburbs early on Thursday afternoon by a US Marine V-22 Osprey helicopter.

We just spent trillions of dollars to topple Afghanistan, stay there until it was so embarrassing that leaving was less embarrassing than staying longer, and there was absolutely no point to the entire exercise. The US knew where Bin Laden was, in Tora Bora, and almost caught him (not that it would have made any difference at all to anything) except they spent tons of resources overthrowing the government and trying to construct a US-style kakistocratic pseudo-democracy. That’s ironic because Afghanistan is one of the nations that perfected that shit (except for the pseudo-democracy) a thousand years ago.

So we’re about to spend a trillion dollars to throw paint on the facade, which is important, but we couldn’t find the money to do something sensible like investing to re-tool our industrial economy. Every attempt to revitalize Manufacturing America seems to end with the capitalists skimming off great buckets of cash and then outsourcing the work to someplace in China.*

Meanwhile, quietly, the scientists at IPCC have noted that polar ice-melt is tracking a curve that exceeds the worst-case scenario that they were warning about. And why wouldn’t it? The US and other great powers have stated, categorically, that they plan on exploiting fossil fuels for at least another 50 years. They won’t even consider anything else – the only argument is about whether or not they will slow down exploitation or continue to, in fact, accelerate it. I was listening to a podcast the other day and they were interviewing some well-spoken executive from a consortium that is responsible for “helping define public policy for energy exploitation” and she kept saying, over and over, “until the renewables kick in, oil and coal are cheaper.” I.e.: the renewables will never kick in, because we’ll keep the cost of oil and coal low until it’s too damn late. Well, it’s already too damn late. [bi]

That, by the way, is the entire article. Just that title. What ICC is saying is that we’re on course for the worst-case scenario and we’re 50 years ahead of schedule. And where is a big chunk of that coronavirus stimulus going to go? With republicans in office, it’s going to go to exploiting more fossil fuels – because those guys’ economy is really threatened.

Some people hypothesize that the coronavirus may come as wave after wave of “you’re fucked.” But I think what’s more likely is we’re going to get fuckslammed by crisis after crisis from different directions. And then we’ll have imbeciles (who should be de-platformed; he’s worse than Richard Dawkins) like the archbishop of Canterbury saying “coronavirus could be as bad as a nuclear war” no, not by a fucking long stretch of your puny imagination, it won’t and shut up because you might give the wrong people ideas.

*A lot of bladesmiths make fun of Chinese machine products, i.e.: “made of Chinesium” or imply that the Chinese do bad work. That’s basically exactly the attitude someone in England would have had about American industrial products in 1850 when Sheffield steel was the shiznozzle. The fact is that quality has more to do with how it’s specified. As a friend of one once told me “in Hong Kong you can have the best suit tailored for you that you know how to ask for.” And it’s true: if you send a Chinese manufactury a specification for a precise machine, they’ll make it. If you send a specification for a piece of shit, they’ll make that, too.

If you think I was just being depressing about the IPCC scenario, you can try this article in CounterPunch [cp]

A recent landmark study of massive ice loss in Antarctica and Greenland fulfills the “worst case” prognosis, as outlined by the Intergovernmental Panel on Climate Change (IPCC). It’s a nightmare come true, as the impact of global warming on the planet’s most significant/biggest masses of ice multiplied six-fold in only 30 years. It wasn’t supposed to happen so unexpectedly, so suddenly.

The next shoe that’s going to drop there is they’re going to realize that the “tipping point” scenario with the methane clathrate is actually happening and we’re going to be going extinct.