When I was in high school, we were assigned to read One Flew Over the Cuckoo’s Nest and we also watched the movie so we could discuss the relationship between movie versions and books; it was a great class.

Ken Kesey, the author, was one of the primary story-lines in The Electric Kool-Ade Acid Test, which I discovered on my dad’s bookshelf and read. I thought the stories of the merry pranksters, the magic bus, the Grateful Dead, and Augustus Owsley were all fascinating stuff. It was reading that book that made me want to someday try LSD. It sounded like fascinating stuff; yes my “gateway drug” was Tom Wolfe. 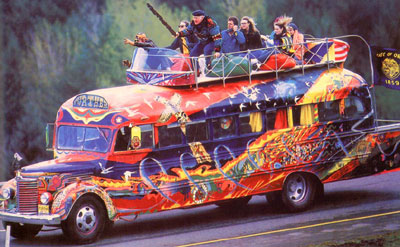 I was too late for hippie culture; I was stuck at the tail-end of the brief period of optimism before white college kids realized they were living between the jaws of a double-ended lie that was playing out in Mississippi and Vietnam. As an academic’s kid, all I felt was the despair as the summer of love turned into politics as usual, and white students realized that the national guard was serious; something that black people had known all along. I felt like all that was left was the music and the drugs, which is saying a lot. I’m glad I never got to try LSD when I was in high school – it’s too intense; it leaves a permanent mark on your life. My first experience with it was when I was just about 40, and I already had a pretty good idea who I was, what life was about, and so it didn’t profoundly divert me from any particular course that I was set upon.

Imagine my surprise when On The Media podcast did an episode, recently, about Ken Kesey. [otm] Imagine my surprise when it began by, casually, mentioning that Ken Kesey had his first LSD experiences as part of the CIA’s project MKULTRA. Prior to the OTM segment, I do not recall ever hearing that Kesey was one of the victims of that domestic atrocity. It’s interesting that it seems to have changed his life profoundly, in a positive way. For those of you not familiar with MKULTRA, it was an attempt to see if it was possible to chemically “deprogram” people using drugs. Some of the experiments were consensual, some were not, and the CIA finally brought everlasting shame upon itself by giving one of its own employees a massive dose of LSD, without telling him, which resulted in the poor fellow’s killing himself. From then on, the CIA’s conclusion was not, “we are horrible assholes who ought to throw ourselves in jail” it was “LSD bad.”

One Flew Over The Cuckoo’s Nest was, apparently, inspired by some trip-visions Kesey had while he was in the medical facility in Menlo Park. Kesey came out from the experiments a different person; imagine what that was like – you go into a “hospital” for an experiment, and they give you some kind of drugs. And you trip balls. None of the people giving you the drugs have actual experience with them; they’re just pseudoscientist hacks dosing unsuspecting subjects who have signed a barely legal blanket waiver. (How do you give someone informed consent when you are giving them powerful psychoactives you don’t understand?) The crimes committed during MKULTRA were many, but the CIA – does this sound familiar? – accidentally shredded all the documents they could find related to the program.

Congress: “Please save all the documents related to MKULTRA so that we can review them to see if there were any crimes committed.”
CIA: “OK, shredding all documents.”
Congress: “We said ‘save’ not ‘shred’!!”
CIA: (fingers in ears) “La la la la la we can’t hear you! Shredder too loud!”

MKULTRA was a huge program operated by psychologists at several universities including McGill. [mcg]

The CIA was initially interested in discovering a ‘truth serum.’ At the time, many believed in the possibility of a drug to use in interrogations that would eliminate all inhibitions, and prompt subjects to speak without reticence. The CIA first experimented with the use of LSD with little luck, and later delved into different types of psychotherapy and hypnosis in the hopes of discovering the secret of mind control.

The CIA always says that, but I think they’re just a bunch of sadists. ‘Truth serum’? They’d probably whine that it was necessary to find something like that because waterboarding people is illegal. Wait, what? We can waterboard people? Let’s give them LSD and waterboard them!

Prisoners inside the U.S. military’s detention center at Guantanamo Bay were forcibly given “mind altering drugs,” including being injected with a powerful anti-psychotic sedative used in psychiatric hospitals. Prisoners were often not told what medications they received, and were tricked into believing routine flu shots were truth serums. It’s a serious violation of medical ethics, made worse by the fact that the military continued to interrogate prisoners while they were doped on psychoactive chemicals. 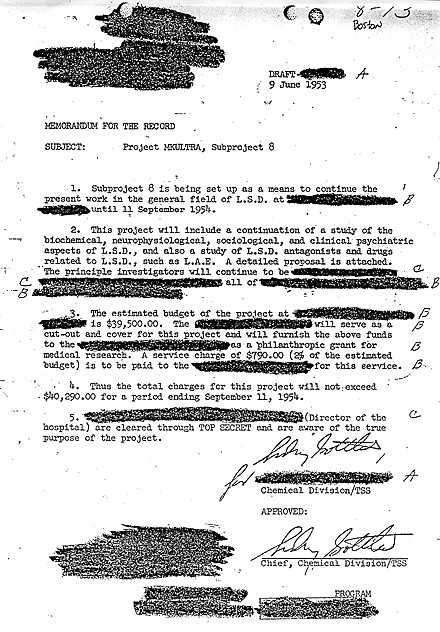 Medical ethics? Oh, yeah, the CIA goons who did MKULTRA and the enhanced interrogation program: psychologists. Not only were the 1960s MKULTRA experiments illegal, immoral, and abusive, they were pointless and unsuccessful. They were stupid experiments; anyone who had actually tried the drug cocktails they were slinging around could have told them that it wasn’t going to work.

Ken Kesey’s book One Flew Over the Cuckoo’s Nest takes on a whole different tone, when you realize that the author had personally experienced unregulated brainwashing experiments, and had come out the other side vehemently anti-authoritarian.

I think Kesey did remarkably well with the situation he was given. Others’ minds were broken, and Frank Olson killed himself when he unknowingly drank the equivalent of 40 hits of LSD in a drink spiked by CIA poisons expert Sid Gottlieb. [wik]

Nobody from the CIA, or any of the doctors involved in MKULTRA suffered any consequences for their actions. The CIA’s cover-up allowed them to run out the clock, so that when the story of what had happened started to get out, the perpetrators were safely dead of old age.

Dr. Donald Ewen Cameron – [wik] was the President of the American Psychiatric Association. Please don’t tell me that I’m being hard on psychologists and psychiatry when I describe these sorts of things as criminal activities. And it’s kind of hard to say that Cameron wasn’t a “mainstream” psychiatrist, given his high stature and role in that community. He should have been put against a wall and shot, but instead he used his lab at McGill to try to wipe patients’ memories using electroshock and curare. If there’s a hell, I’m sure he’s down there with Shiro Ishii, Joseph Mengele, and Dusty Rhoades [wik] [Rhoades was an oncologist, not a psychologist, so … psychology is off the hook for Rhoades’ attempt to reduce the population of Puerto Rico]

The main drug that was involuntarily/nonconsensually used on victims at gitmo was Haldol. Haldol has all sorts of nasty side-effects including depression and suicidal ideation. Remember: most of the internees at gitmo were innocent of crimes and were not terrorists; they were people who got swept up in the CIA’s “sell us a terrorist, we pay you a briefcase full of cash” program.

Abuse of Haldol appears to have been a common element of the CIA’s torture program (designed by psychologists Jessen and Mitchell) Abu Zubaydah was apparently routinely overdosed with haldol; i.e.: he was tripping his brains out while they were waterboarding him and slamming him into walls while disorienting sounds were playing at high volume.

My Candidate for “Game Of The Year” » « More on Chisels