Given the news of harrassment in the media, this game was probably not as thoughtfully named as it could have been. It deserves to be winning more attention than it has, and I suspect the name may have something to do with it.

I am not a big fan of puzzle games with pointlessly difficult puzzles; the sure-fire way to get me to delete a game off my hard drive is to give me an intellectual puzzle that’s not really solvable with the use of intellect. The Sexy Brutale is a puzzle game with a great deal of complexity, but the complexity is not arbitrary – it’s a side-effect of the game’s main conceit: you can travel in time. Sort of: you are trapped in a mansion, with a clock that resets to noon on Saturday and – for some reason – the mansion’s staff are murdering all the guests. Your job is to figure out what’s going on, and interfere with the staff’s murder efforts: sometimes you need to disarm a trap, or change its configuration, and you have to maneuver through the building, avoiding the murderous staff, taking advantage of your understanding of time.

It’s very clever. And the complexity that’s there is a result of your trying to keep track of all the things you’ve seen in the building, and remembering where the staff are, and when, because every action they take may be the lynchpin you need to defeat one of their plots. 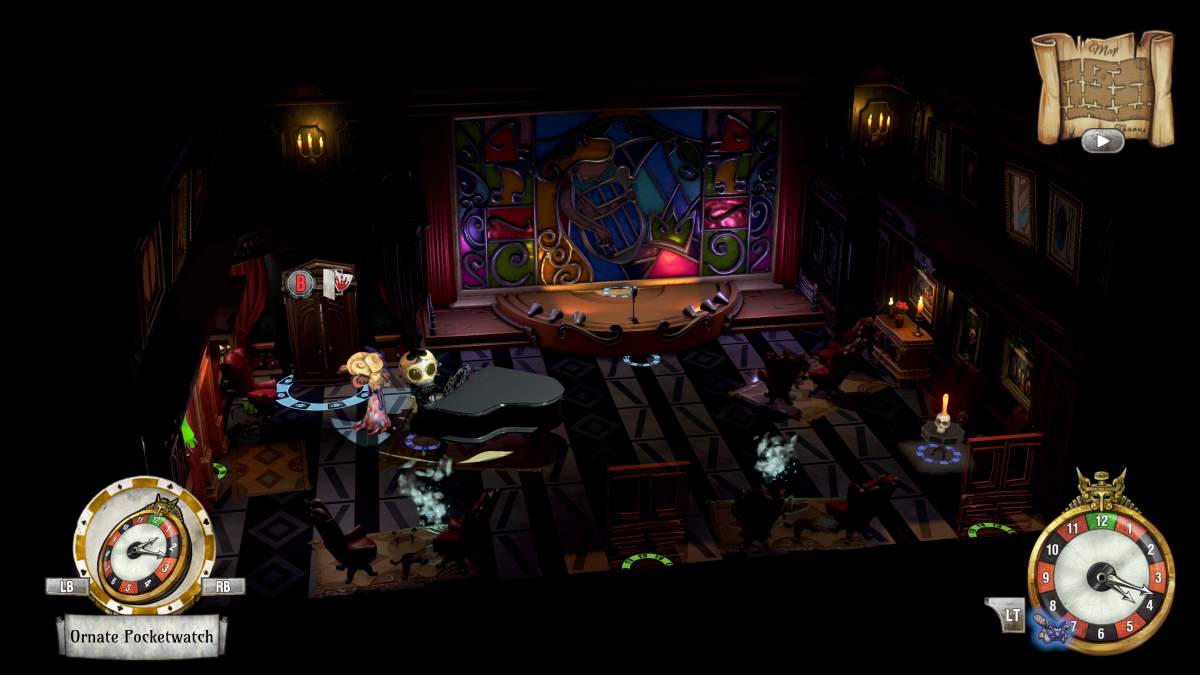 The set designs are lavish; you’re in this weird but beautiful mansion/casino/garden with a bar and a variety of rooms. There are secret passages, security cameras, door locks, and (of course) the creepy staff – that need to be worked around. Here, the hero is hiding in a cabinet as he watches the pianist-servant planning the horrible death of a singer. All of the rooms are as beautifully designed and – best of all – the maps sort of make sense: rooms lead to rooms in ways that are not just arbitrary. If you’re a person with a great sense of direction (like I used to be) then you’ll be happy with the way there are no mysterious topological errors in the maps, and things that lead to places you’d expect work like you’d expect.

I chose to screen-shot the scene above because it is not (by a long shot) the coolest room in the mansion. There were several that made us gasp out loud in amazement. I was playing with a friend; she drove and I kibitzed – it’s also a good game for cooperative/group play. 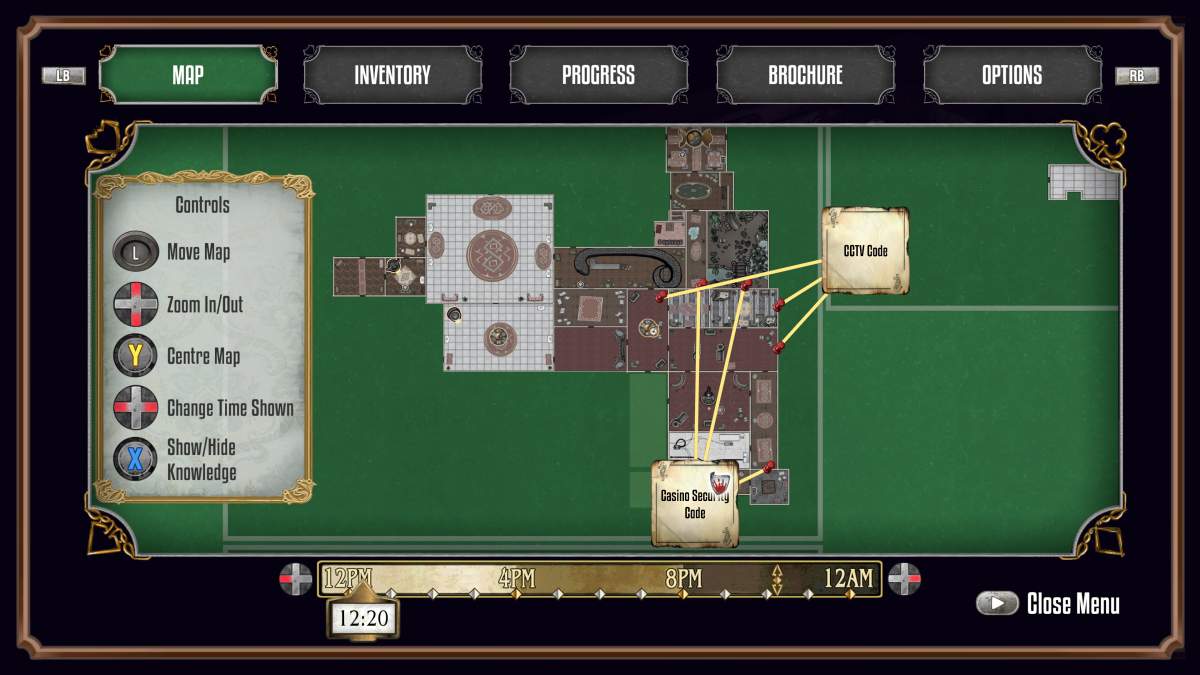 The map is really really cool. See the slider bar at the bottom? It’s time. If you slide back and forth through time, the map will reflect all the things you have learned about where the various staff and guests are at what time – a lot of the game is figuring out how to get from one place to another in time to ${delete} the ${deleted} before the victim ${deletes} them self.

As the game is, basically, a time-loop, the sound track reflects it brilliantly. At one point, the music is interrupted briefly by the sound of a ${thing} happening at 12:05 – and the sound always happens at 12:05. Your brain subtly learns and coordinates the sounds of the things happening in the building, and they blend in and out of the music. It’s fascinating how, by the end of the game, you become comfortable hearing the various sounds of the mansion in time.

I loved the music; it’s sort of what you’d expect in a funky weird retro casino full of the damned. It changes a bit from area to area and time to time but overall, it’s self-similar in a daring way. Picture a kind of retro swing dance sort of music, with clarinets here, and saxaphones there. It’s simultaneously upbeat and macabre.

When I really enjoy a game, I often find myself falling into the game-space in dreams. The Sexy Brutale and its funky music and opulent designs became my dream-land for the 3 days it took to play through it.

Our play-through was leisurely; the game is not very long and someone who really attacked the game hard could finish it in an evening. Generally, my gaming style is not to beat the game, but rather to savor it – if it’s worth it. Or delete it, if it’s not. I would have been happy if the game had been twice as long, but it’s not, and that’s fine. Another thing I liked is that it doesn’t clearly tease endless sequels. I like a game that has a beginning, a middle, and a conclusion, without plans for another 5 years of the same. The Sexy Brutale works so well because it’s original and weird and complicated, and when weird and complicated becomes “normal” then it’s no longer original.

Right now, it’s $10 on steam. If you like a good puzzle game, I recommend this one. [steam] 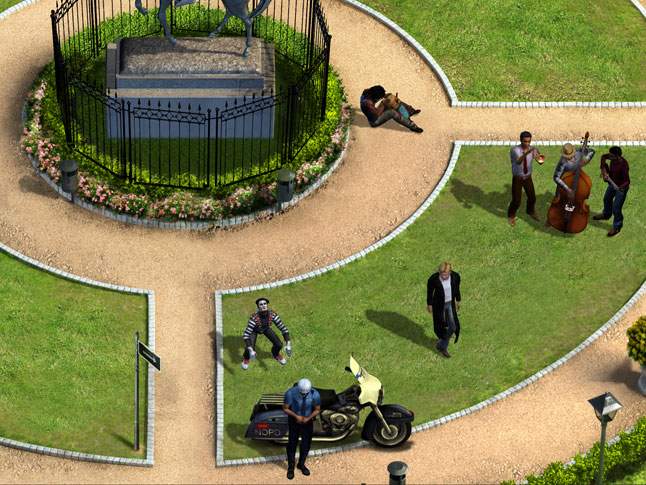 “Intellectual puzzle that’s not really solvable” – I am thinking specifically of the Park puzzle in Gabriel Knight, in which you need to examine the inscription on the statue in the middle of the park, but you have to first create an inconsistent chain of events in order to get past the fence. In the real world, you’d simply jump over the fence and read the darned thing. It was a great game with a fantastic plot, and you suddenly slam face-first into this absurd puzzle (and this was before the era of internet walkthrough sites) Gabriel Knight is still worth a play-through if only for the amazing voice-acting by Disney queen Tim Curry.

A Weird Stress-Dream » « Remember The Days When the US Used Nuclear Weapons Against Americans?