I’ve been getting a creeping sensation about this for a while, now, and I’m not at all surprised that other commentators are noticing, too.

The whole “Trump-North Korea negotiations” fiasco started off with what appeared to be an attempt at rapprochement by the North Koreans, then suddenly segued into talks about “denuclearization.” Then, there were meetings that went nowhere, then silence.

The China trade war/new trade deal fiasco started off with a bunch of unwise and ridiculous tariffs intended to set a talking-point for hard negotiations, then suddenly segued into “we’re going to sign a treaty really soon.” Then, there have been endless meetings and silence.

The Iran near-war/new sanctions fiasco started off with a bunch of threats and bluster and then, when Iran didn’t just crumble (which makes sense, they have been living under sanctions for a long time…) there has been silence.

Most sensible people are happy that Trump hasn’t started any wars. When he put Bolton in as National Security Advisor, we all worried about that. But maybe what’s going on is that Trump is doing the equivalent of what he always does: bloviating and playing golf. It would not surprise me in the slightest if Trump simply does not understand that international diplomacy is not done by two people beating a deal out in a smoke-filled back room. Perhaps he thinks that Reagan/Gorbachev’s summit in Iceland was a spontaneous event, where Ronnie and Michi swapped some love-sonnets and decided on world peace. No, there was a gigantic amount of prep-work and each side feeling the other out through back-channels before the meeting “spontaneously” happened.

What if Trump is just a complete greenhorn fuckup, who’s literally a laughing-stock, and his administration is simply pretending to do diplomacy? 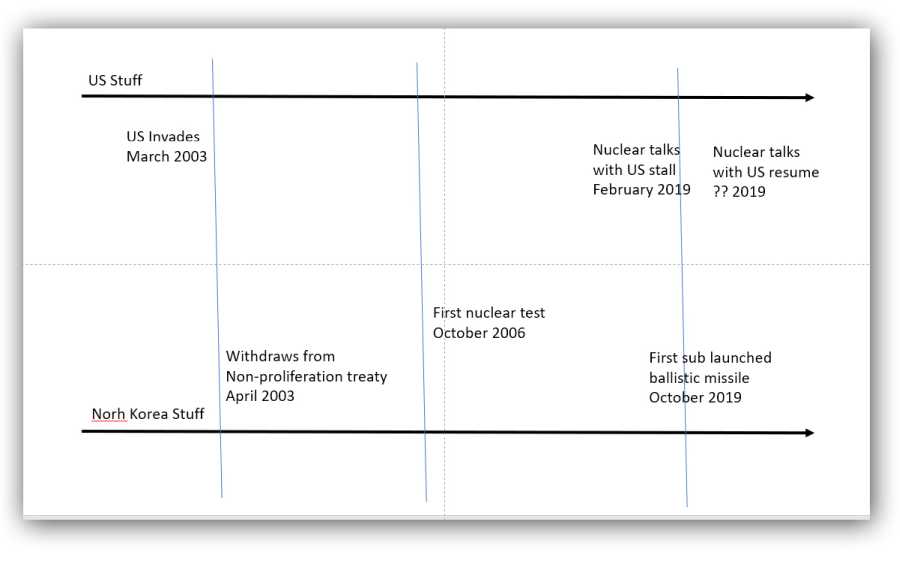 Let’s go back to the North Korea “denuclearization” negotiations. It had to be immediately obvious to anyone who thought about it that North Korea was not going to simply give up its nuclear weapons. Not, especially not, right after Trump had just attempted nuclear blackmail. The entire reason that North Korea went all-out to produce nuclear weapons was, well, just look at the time-line. The US went on a great big invading and bombing binge starting after 9/11, and having a nuclear deterrent is just about the only thing that historically has gotten the US to back off. Remember, US forces stopped short of Baghdad in Gulf War I because Saddam Hussein managed to credibly confuse the world as to whether or not he had nuclear weapons. That worked for a while but eventually they hanged him for his successful deception.

Trump goes charging in and immediately he and his team of incompetents are talking about nuclear disarmament when, probably, the most North Korea was willing to discuss was (my guess:) a framework for reducing the dangers of testing. Like other nuclear powers, North Korea would quietly pre-announce tests, not aim ballistic missiles on an axis for Tokyo, things like that. In return the US would promise to stop pirating North Korean coal-ships, and allow the North Koreans some trade, as long as it was not weapons tech. That sort of thing. The North Koreans’ reaction when the US team said they wanted to negotiate disarmament would have been “you first LOL.”

Expecting the North Koreans to disarm is incredibly dumb; remember the North Koreans had 1.5+million killed by Americans in unrestrained saturation bombing that lasted for 3 years after combat operations on the peninsula ended. [stderr] They’ve seen what Americans will do when they are given a chance.

I don’t expect we’ll get confirmation that Trumpian foreign policy is essentially non-existent until after he’s dragged out of the white house on a gurney. When that happens, then every shitbird who has been afraid to chirp will run to sign up for book deals. Book stores would have to open a whole new section entitled “Complicity Tell-Alls” except book stores are extinct. It’s a real shame but the “Tell-All” industry is going to experience a bit of a renaissance, I bet – there are a lot of cowards with stories.

One new “Tell-All” has some small tales of Trumpian political incompetence: [wc] Trump and His Generals by Peter Bergen

Trump had been repeatedly told that US freedom of action against North Korea was constrained by the fact that the regime’s artillery could demolish the South Korean capital in retaliation for any attack, inflicting mass casualties on its population of 25 million.

What a blockhead. And then there’s this:

After watching a retired four-star general, Jack Keane, interviewed on Fox News in late January 2018, saying that US troops deployed to South Korea should not take their families with them, Bergen reports that Trump told his national security team: “I want an evacuation of American civilians from South Korea”.

A senior official warned that such an evacuation would be interpreted as a signal that the US was ready to go to war, and would crash the South Korean stock market, but Trump is reported to have ignored the warning, telling his team: “Go do it!”

Alarmed Pentagon officials ignored the order, and – according to Bergen – Trump eventually dropped the idea.

“Alarmed” is not the right word. When I was in the military, I was told all kinds of nonsense about how a soldier’s duty was to respectfully decline an unlawful order. Not ignore it. Are we supposed to believe that nobody in the situation room had the courage to point out that this guy is not suffering from an ordinary level of ignorance; there is something wrong with him.

Would you like a dose of existential dread, according to [beast]:

“If you don’t think Tucker Carlson has more influence on national security policy than many of the guys on the National Security Council, you’re wrong,” Stephen K. Bannon declared Wednesday tonight to a small group of wealthy Manhattan elites in a baronial Fifth Avenue apartment. 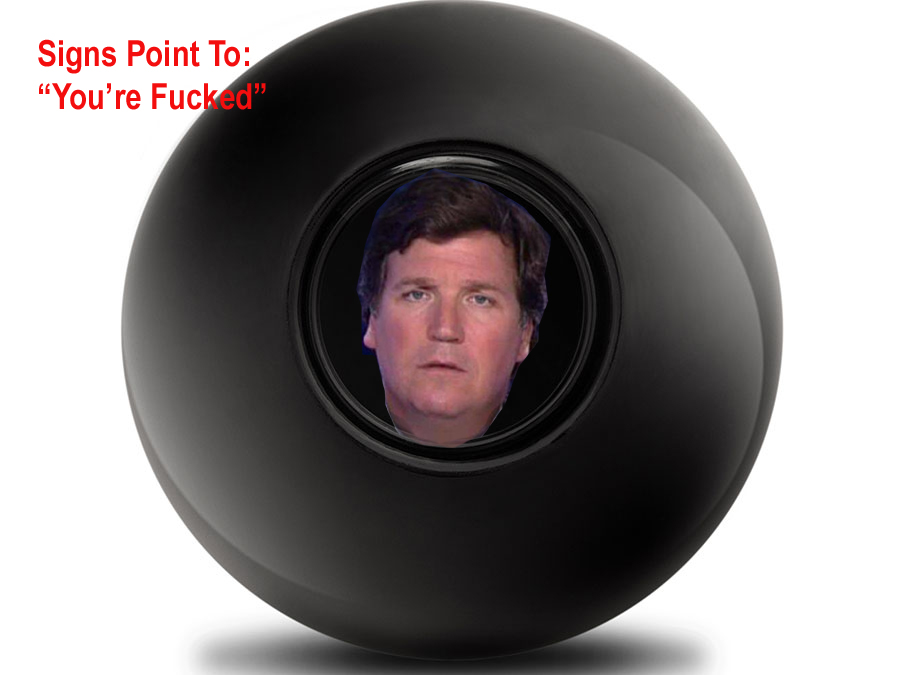