Most Americans don’t know how Korea came to be partitioned, which is an embarrassment given the political oppression and violence that both Koreas have experienced as a result. 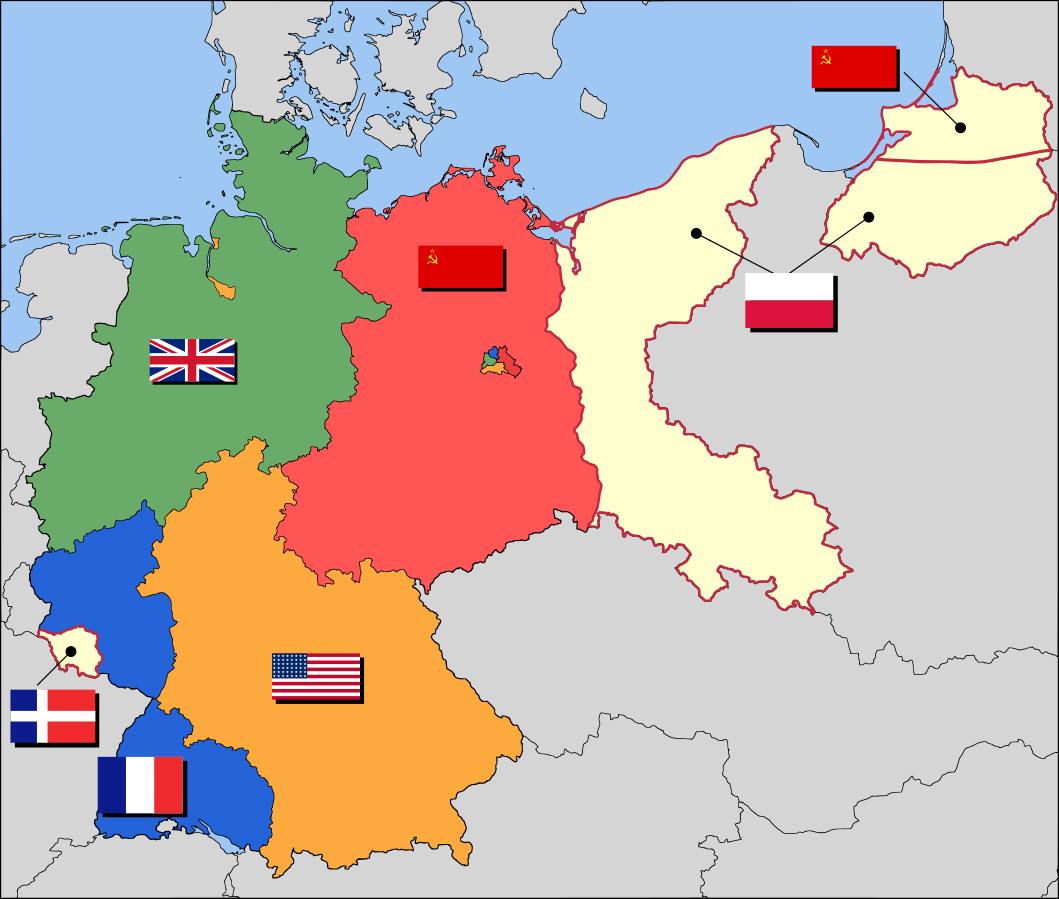 One proposed territorial breakdown of control of Germany, 1945

It ought to go down in history along with the other great “arbitrary lines drawn on a map” – every one of which has been a political and humanitarian disaster: the partition of Palestine, The partition of Germany, the Partition of Vietnam and the partition of Korea. 1945 was when they partitioned Germany, and it probably seemed like a good idea, since the Red Army had a good head of steam up and was going to flatten everything until it got to Belgium, unless the US and UK did something to stop them without conflict. So the victorious powers met at Potsdam and divided up the country, as well as dividing up its colonial properties and conquests, which were substantial.

Germany was a mess, at the time, since it contained not only massive populations of internally displaced Germans, it had populations that had been moved there by the Nazis before the collapse – 8 million foreign displacees, including around 1/2 million prisoners from concentration camps or forced labor camps. Most of the world, post WWII, was in a similar situation: a great big mess, but a desire to stop the killing. So, the military status quo pretty rapidly became the new lines on the map. In the case of Germany, the lines on the map were not drawn with a ruler; they were established by the traditional method: soldiers with guns glaring at each other while sharing cigarettes and their hoarded supplies of sweets and alcohol. Eventually those lines became fences, then walls, then national borders.

Then there was 1947. 1947 was a bad year for partitioning: India (into India, Pakistan, and Bangladesh) and Palestine. In the case of Palestine/Israel, the United Nations drew lines on the map. These were adjustment lines reflecting the new political reality of Germany’s defeat which were complicated by the earlier adjustments following WWI and the final carving-up of the Ottoman Empire (which hadn’t worked too well). The partition of India was also complicated; initially it was simple: muslim Pakistan and Hindu India, but eventually Burma, Ceylon, and Bangladesh peeled away. Remember that Japan had threatened the underbelly of India, through its invasion from Singapore up into Burma. It is hard for us, who grew up after it happened, to understand how profoundly WWII attempted to re-draw the maps, “India” under the British covered everything from Baluchistan and Kashmir to Burma – it was not a unified ‘nation’ and it broke back apart more or less along lines similar to its pre-imperial constituencies. The way India was broken up was based on the “Mountbatten Plan” – basically, Louis Mountbatten, British viceroy (literally “stunt king”) broke imperial India up in to chunks along ethnic and religious lines to stop the whole thing from fragmenting violently into sectarian genocide. It wasn’t an easy process then and it isn’t sitting easily now – any more than the partitioning of the former Ottoman Empire or Palestine is sitting easily. For those of us who didn’t grow up in WWII it’s hard to understand what “1 million displaced people” means or looks like, but between 14 million and 20 million people displaced during the partition of India. 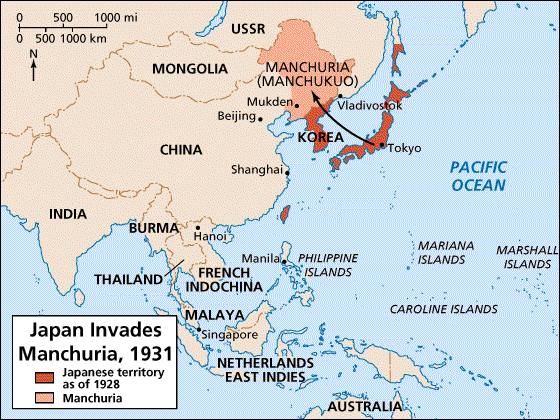 The other big chunk of imperial possessions that got carved up was China and Korea; Japan had conquered Korea in 1910 and had ruthlessly crushed any resistance, while trying to turn Korea into a virtual slave-state. The Japanese attempted to create a similar situation in Manchuria – a section of China that bumped up against Mongolia and the USSR at the top and Korea at the bottom. During WWII the Japanese further extended territorial conquests into China, but when the Japanese war effort began to collapse, as the Americans closed in across the Pacific, The Red Army turned a bit of its attention from Germany (which had since surrendered) re-deploying and preparing to start stomping its way down through Japanese-conquered territory.

The Red Army was, for all intents and purposes, unstoppable at that time, except for by a power with something like nuclear weapons.

There is still a great deal of debate about when Japan accepted it was going to lose, and when it decided it was going to surrender, and how, but there is no doubt at all that the Japanese were factoring in how the US had treated the surrendered parts of Germany that it controlled, and how the USSR was likely to treat Japan if the Red Army came down through the Korean peninsula and had its way with Japan. Americans are raised with a pretty fiction that “we had to use nuclear weapons on Japan to get them to surrender” but that’s almost entirely a lie – the Japanese were already trying to surrender, and were (not being entirely stupid) looking with horror at how The Red Army was gearing up to deal with Manchuria – and, by extension, Korea and the Japanese mainland. There were 1.4 million Red Army soldiers squaring off against 700,000 tired and relatively poorly equipped Japanese; it was Bambi vs Godzilla. Japan was redeploying pieces of the Manchurian army (the “Kwangtung army”) to orient toward the Pacific theater – basically the remaining troops were going to have the unenviable mission of dying in place to slow the Red Army down. So, the 700,000 in Kwangtung (“Bambi”) was shrinking rapidly, while The Red Army (“Godzilla”) was building toward 2 million. Then, things happened relatively quickly – observe the sequence: 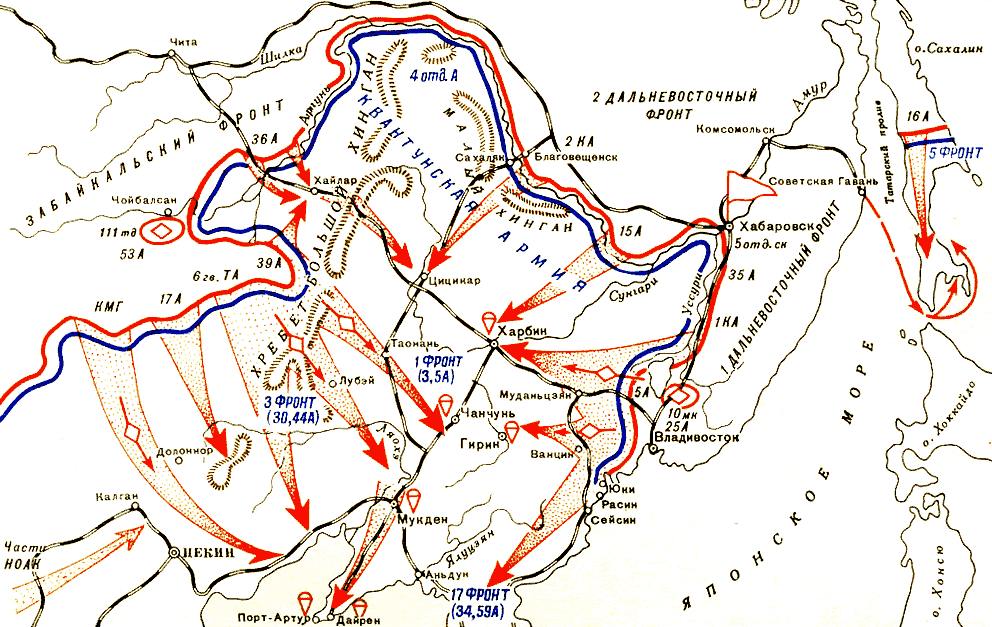 And the victors once again had to divide up the spoils. There had been various meetings in Yalta, Potsdam, etc., where the expected-to-be winners began the process of figuring out who got what, and – as in Germany – a lot of the decisions were based on practical “ground truth” – The Red Army at that time outnumbered the rest of the remaining forces in Europe and Asia by a factor of 3:1 and was occupying a great deal of real estate. The big decision, in most areas, was based on who surrendered to whom. In Manchuria and Korea, that meant there were big areas where Japanese troops were surrendering to The Red Army, effectively marking Soviet territorial gains. At meetings like Yalta and Potsdam, there were various proposals floated for various divisions, but the end-state of the war was not yet known – so the end-state of the Korean peninsula and Manchuria were also unknown until August, 1945.

At Yalta, the prevailing idea was that Korea would be put under a 4-nation protectorate until the Koreans could figure out what they wanted to do. By the time Japan surrendered, the ground truth was that the USSR had grabbed the northern part of Korea. Rusk and Bonesteel’s division of Korea becomes enshrined in General Order 1 for Japan – the first set of directives (published by Douglas MacArthur) for how Japan is to be administered following surrender. The division of Korea was a mix of practical and arbitrary: the USSR wasn’t going to give up any territory that The Red Army was occupying, and nobody wanted to re-ignite the war, so the dividing lines were drawn and soldiers glared at each other across them while sharing cigarettes and alcohol, as usual. Rusk and Bonesteel’s line conveniently placed the capital of Korea in the US area, but the Soviets rather clearly weren’t going anywhere. The US-assigned governor of Korea, Lt General John Hodge, landed an Army corps at Incheon in September 1945 and established the US’ “ground truth” presence to offset the Soviets’. Hodge’s September 1945 landing at Incheon is not to be confused with MacArthur’s September 1950 landing. “Hello, your new government is here” time to meet the new boss.

You have probably noticed that I didn’t mention anything about the Koreans being consulted in even the tiniest degree. That’s because they weren’t. Hodge, in fact, recruited a fair number of former Japanese military administrators to help him establish the new government in the south because, after all, they had experience running the place! Concerned by the level of support for communism in China and Korea, the US ‘democratically’ appointed an anti-communist, Syngman Rhee, who was a strong supporter of the US and US policies. Meanwhile the USSR set up anti-Japanese proto-communist/Stalinist Kim Il Sung, who was a major in The Red Army who had served in Manchuria. The idea of a trusteeship that would allow the Koreans self-determination evaporated; they were appointed a dictator in the north, and a dictator in the south.

In 1950, Kim Il Sung attempted to reunify Korea militarily, and the result was a whole lot of dead people: half a million Korean soldiers dead, 300,000+ Chinese soldiers dead, and (estimates vary) 900,000 South Korean civilians and 1.5 million North Korean civilians. The Americans still make a big deal of their ~40,000 dead, which is a rounding error compared to what the Koreans suffered.

I’ve done some procrustean simplifications of the history, but that’s the high-level view.

The way the US and USSR partitioned and established North and South Korea primed the situation for disaster – a situation that has had to continue because the empires involved in establishing the disaster (Japan, China, the US, and USSR) would have all have to cooperate to have prevented it. They would have had to respect the Koreans’ self-determination and help them decide on how they wanted to rule themselves.

American political ideology today says that there’s something wrong with those North Koreans and they’re crazy bad people. But they had no say in any of this, any more than the South Koreans did. The division categorically is not about communism VS capitalism, because – by the time the Japanese Empire surrendered, no political leader would have mistaken Stalin for a communist. The division was definitely not about democracy versus dictatorship, because both sides installed un-elected ideologically aligned leaders. There was no democracy on either side of the 38th Parallel.

The “pretty fiction” nuclear weapons were necessary: The Kwangtung army that was redeploying to Japan was marshalling in the Kanto plain south of Tokyo, where the Japanese high command expected a US sea-borne invasion was most likely to land. The scenario was plausible: a D-Day style landing followed by a breakthrough/upward hooking maneuver to surround Tokyo, and flatten it. With complete control of the air, and the Japanese military economy on its knees, the end was inevitable, but US bombers completely ignored that important military target – preferring instead to strike cities full of civilians.

500,000 Japanese of the Kwangtung Army, that surrendered to the Soviets, wound up in Soviet labor camps. They were slowly repatriated over the following decades but a lot of them simply disappeared.

The Japanese forces in Manchuria experimented with biological weapons, using Chinese civilians as live subjects. Some of the Japanese officers involved in human experiments were granted immunity in return for their secrets, and wound up working for the US Government at Ft. Detrick Maryland, which was the US bioweapons research center.

One Thing They All Seem to Agree On » « Sunday Sermon: An Open Letter to an Old Cold Warrior Former Facebook “Friend”