NASA’s done a good job producing a sort of “space disneyland” – probably for the usual reasons: it’s necessary to attract kids’ attention. It drives me a bit nuts when I see things being dumbed down for kids because their parents can’t handle it.

These are life-size mockups, mostly, though some of the components are real. The real stuff is too valuable to have sitting out in the rain. It’s a pretty cool display – you can get a sense of the towering size of these machines.

The rockets are not bent, that’s panorama mode

F-1 engine. (I believe it’s a mockup) – I love standing there and trying to figure out how they work. They’re full of mechanical control/feedback systems. They are attached to the bottom of the rocket (5 of them) on massive gimbal systems that allow them to be angled; when I was a kid one of the things I wondered was how the rockets could fly under control (the Estes toy rockets I built sometimes did not go so straight) – that’s how. 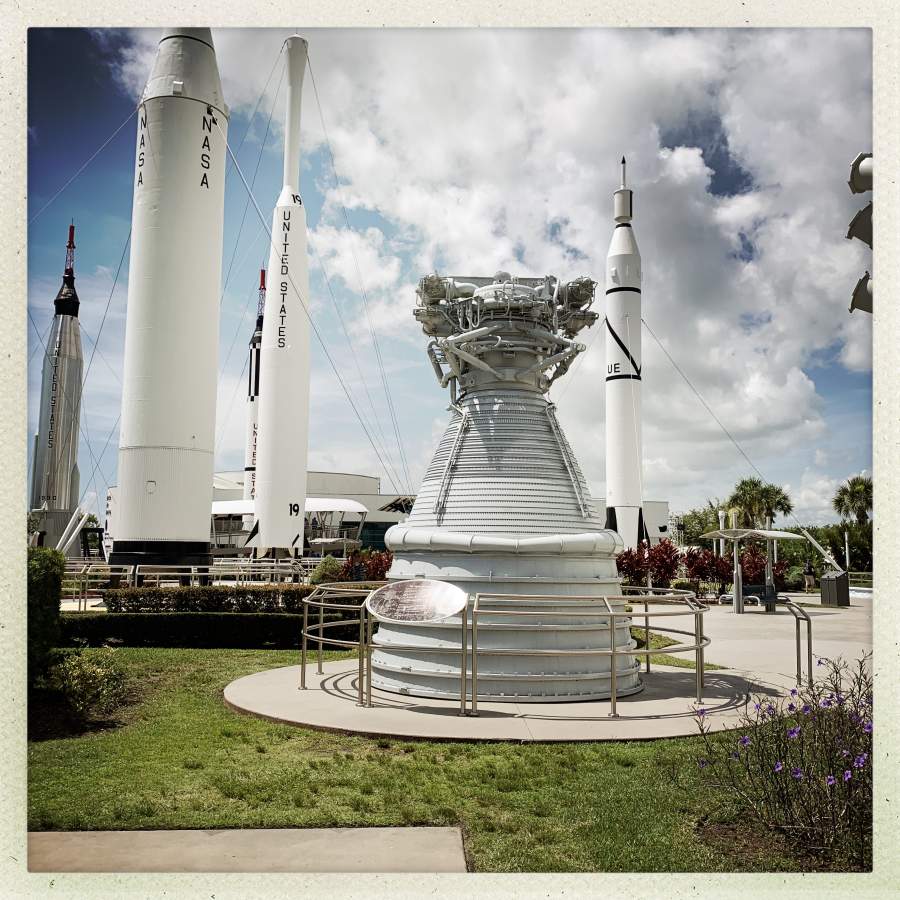 The big donut-like collar thing around the engine is one of my favorite parts of it – it’s the oxygen feed system. On the other side of the engine is the high pressure liquid oxygen turbopump, which pushes liquid oxygen down a pipe that curves around the bell, getting smaller as it gets closer to where it meets on the other side. It gets smaller because, as the oxygen is blasting out into the bell, its pressure drops, so the diameter of the pipe is manipulated to maintain a constant pressure. I’m sure someone had fun calculating that with a slide-rule. (I know, it’s just calculus, but calc II was as far as I got, so I think that’s pretty fancy thinking). 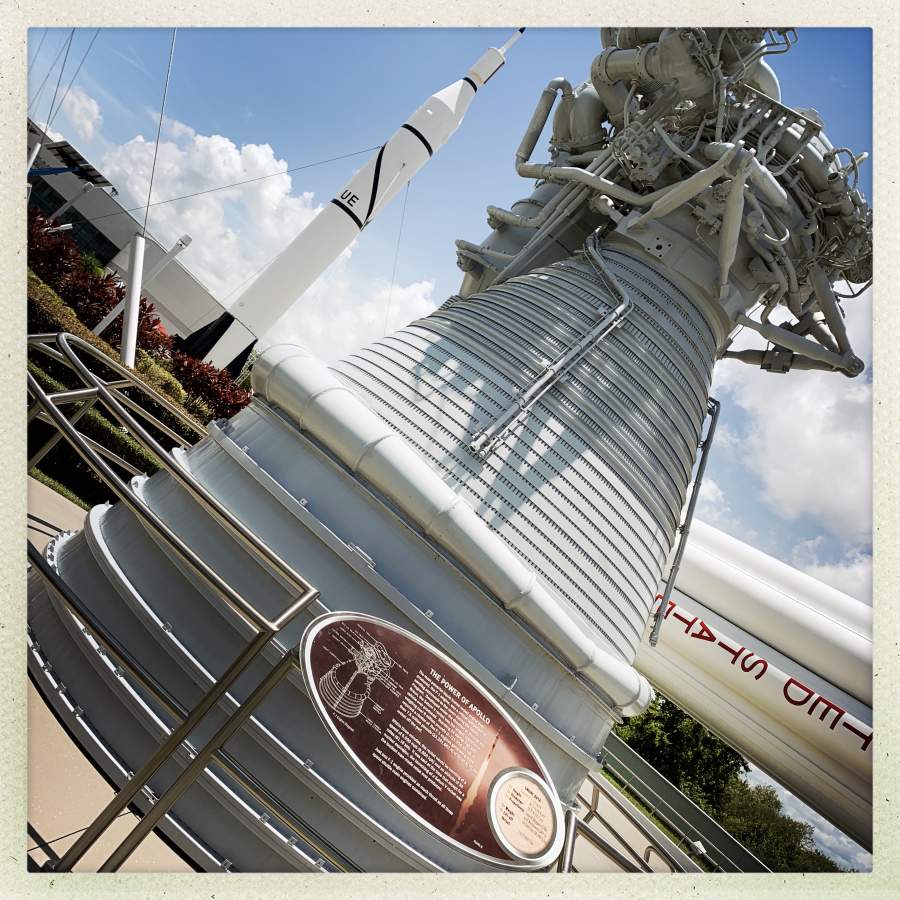 The big thing on the upper left of the engine is the oxygen turbopump.

If I recall correctly, the pump did not have to get the liquid oxygen moving at supersonic speeds; that was taken care of by the bell – as the oxygen flows into the bell, it follows the bell, which has a larger surface area and makes it expand; the gas goes supersonic inside the bell as a result of that expansion. The point is not that that is cool (which it is) but that the high pressure turbopump is pumpin’ some #*!@!*!*#ing oxygen really fast.

The triangular things at the top are the linkages for the gimbals, which move the engine around. Those connectors are big turnbuckles that allow them to be carefully adjusted and aligned. I have absolutely no idea how a rocket’s engines are aligned and calibrated but you can imagine that’s a really important process. 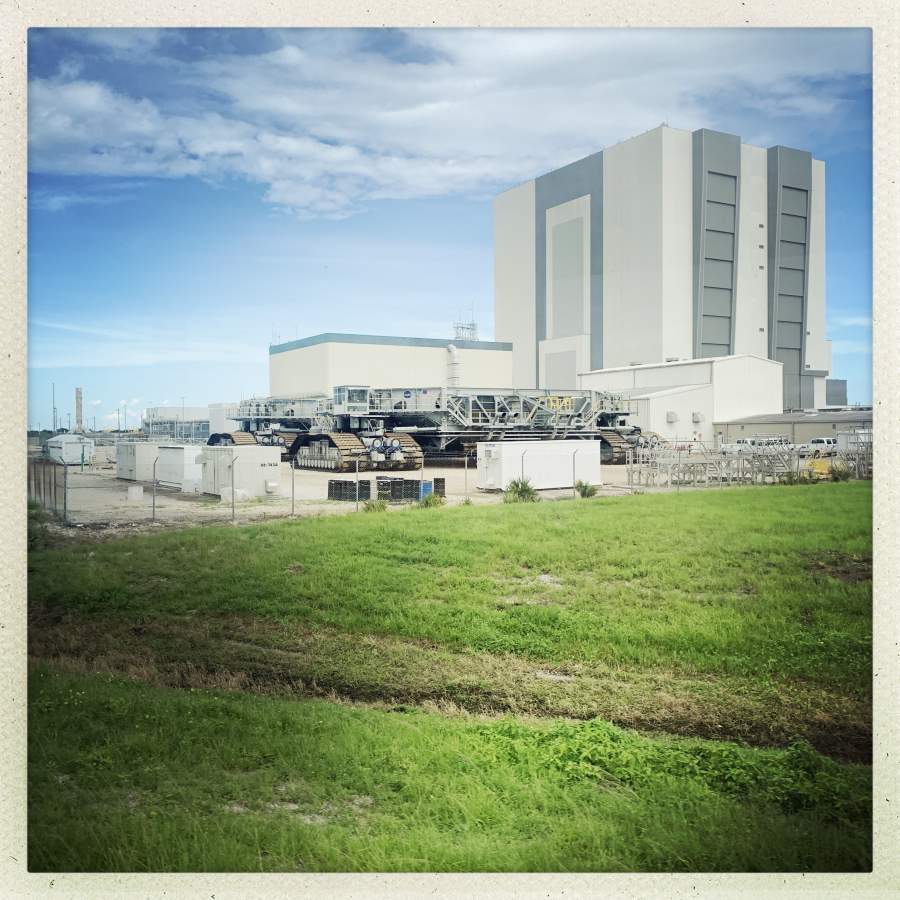 That’s one of the crawlers, parked outside the vehicle assembly building (VAB). The VAB is big. See the squarish indentations on the darker gray pieces along the side? Each of those indentations is the size of a football field. It’s not hard to get good pictures of the VAB because if you are taking pictures anywhere within a mile of the VAB, the VAB is in the picture – it’s that big. The crawlers go 1 mile per hour over a special road built for them that’s similar to an ancient roman road: layers of concrete then layers of sand then layers of gravel. They told us that each of the links in the crawler’s tracks, which are forged steel, weighs a ton. Look at the little pickup trucks parked next to it. It’s hard to get a sense of scale.

NASA has constructed an entire building to house a complete Saturn-V moon rocket; it’s made up of unused parts and some used ones including the crew capsule of Apollo 11. There’s this gigantic space you can walk through, full of insanely cool artifacts.

This is a side-view of the back of the Saturn-V that’s lying on its side in the building; through the cluster of engines on the back. It’s a bit hard to really feel how big it is – it’s a couple of stories tall lying on its side. 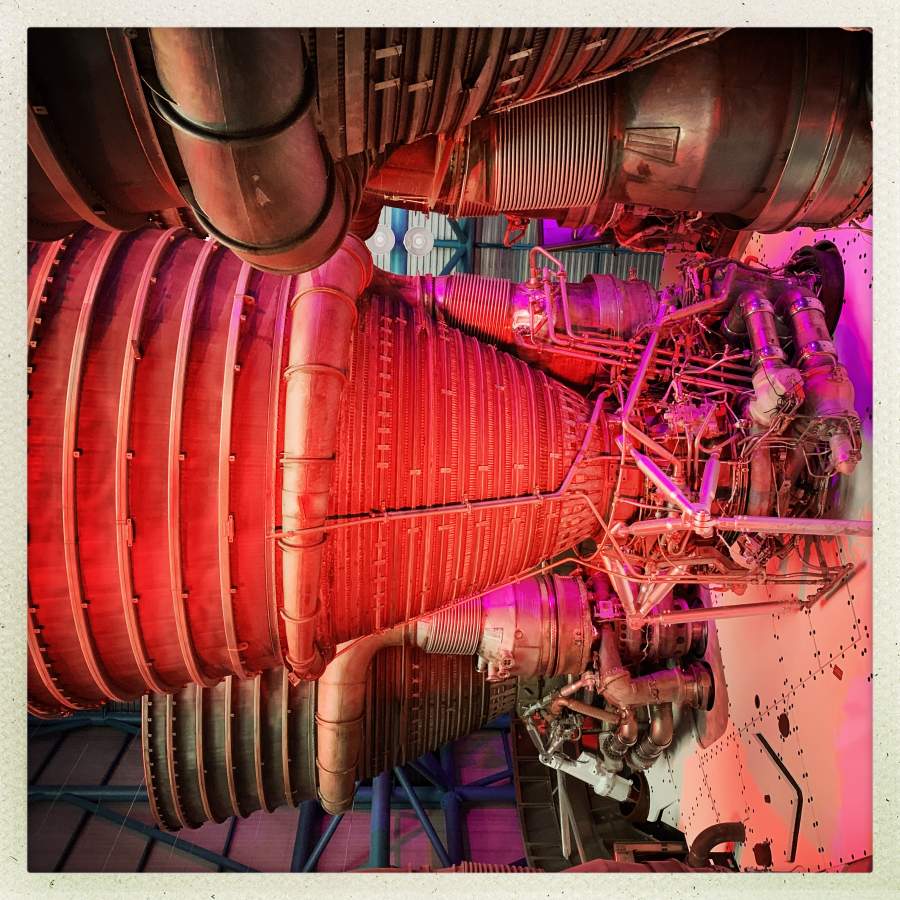 Each Saturn-V cost what an F-35 costs today. Adjusted for inflation, it’s more expensive but not by a large factor.

The building housing the Saturn-V is the old command building; the old “capcom” (Cape Canaveral Command) is still in place and they have turned it into a museum. The details in the museum are delightful: there are two coffee tables at each end of the room (no drinking coffee at your workstation!) that look like they were being used to smoke and drink coffee just a few minutes ago. 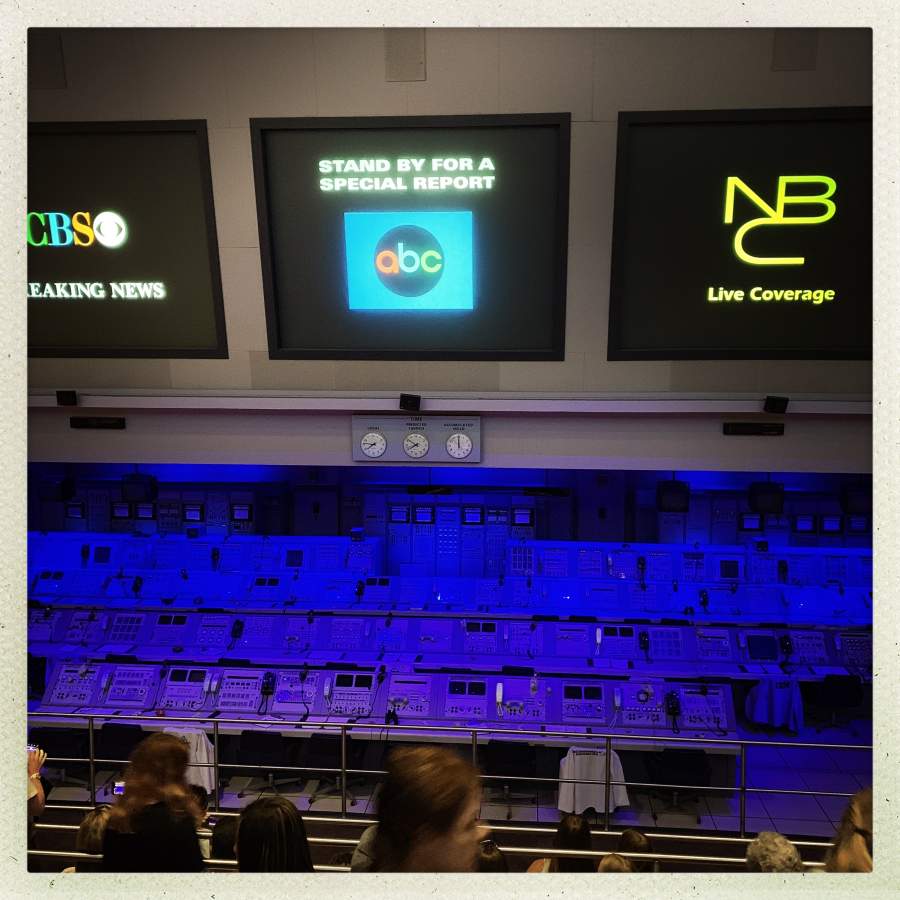 If you’re a space junkie, there’s a cool podcast that BBC recently did called “13 minutes” [bbc] that explains all the radio chatter and what it means during the final descent, and the significance of all of the little decisions that the astronauts had to make. It’s fascinating stuff if you’re a tech nerd. Here’s a teaser/spoiler: when you hear capcom say “we are go for R46″ that is telling the astronauts to punch in program load-point R46 into the flight computer” – the computer had all the detailed operations hard-wired (they explain what “hard wired” means) into it. The astronauts and the computer were symbiotic – they used the computer as a set of functions that it could do, while they worried about what they had to do.

I didn’t get a picture of the egress door of the Apollo-11 capsule but it impressed me with its complexity. There’s a single handle that controls a web of actuators and rods and clamps, and you can remove the whole thing with one pull. Bill Cheswick, Anna, and I had a bit of a boggle as we pondered how it was designed and by whom. It turned out, when I got home and checked on youtube for my usual channels, that Adam Savage has been leading an art project with machinist and fabricator youtubers to make an exact replica of the door. [collectspace] So I got to watch This Old Tony mill the actuator mount that you can see at the upper left of the door: 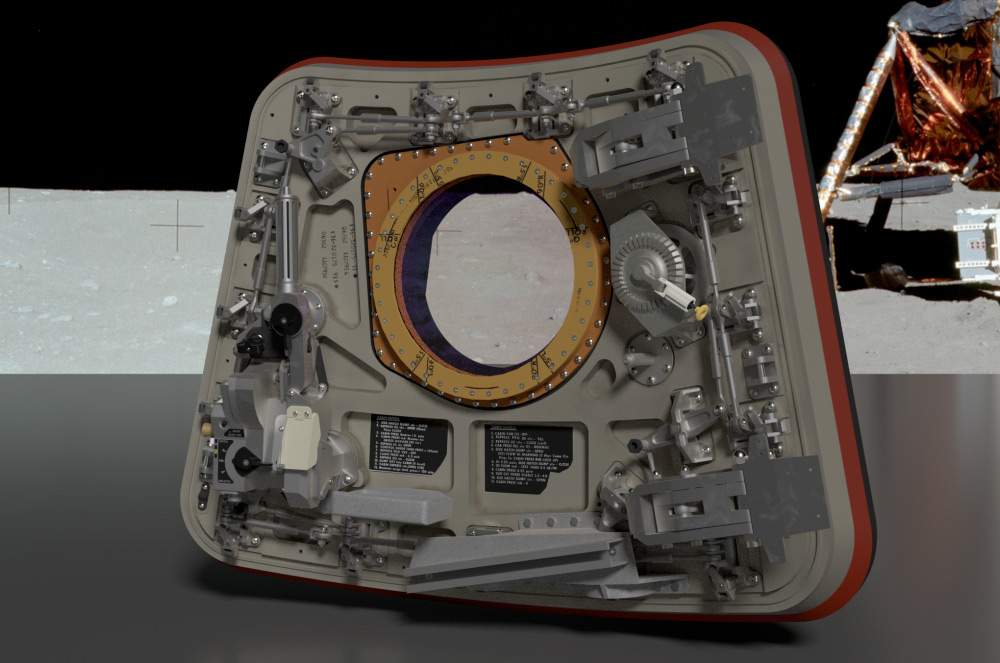 That’s a rendering of the 3D model Adam’s team are working from. I notice that the actual handle is missing – it’s what goes in the recess to the upper left, just to the left of the porthole. That’s just how my brain works: I don’t know what day of the week it is but I notice something like that.

[Edit: somehow I forgot this picture.] 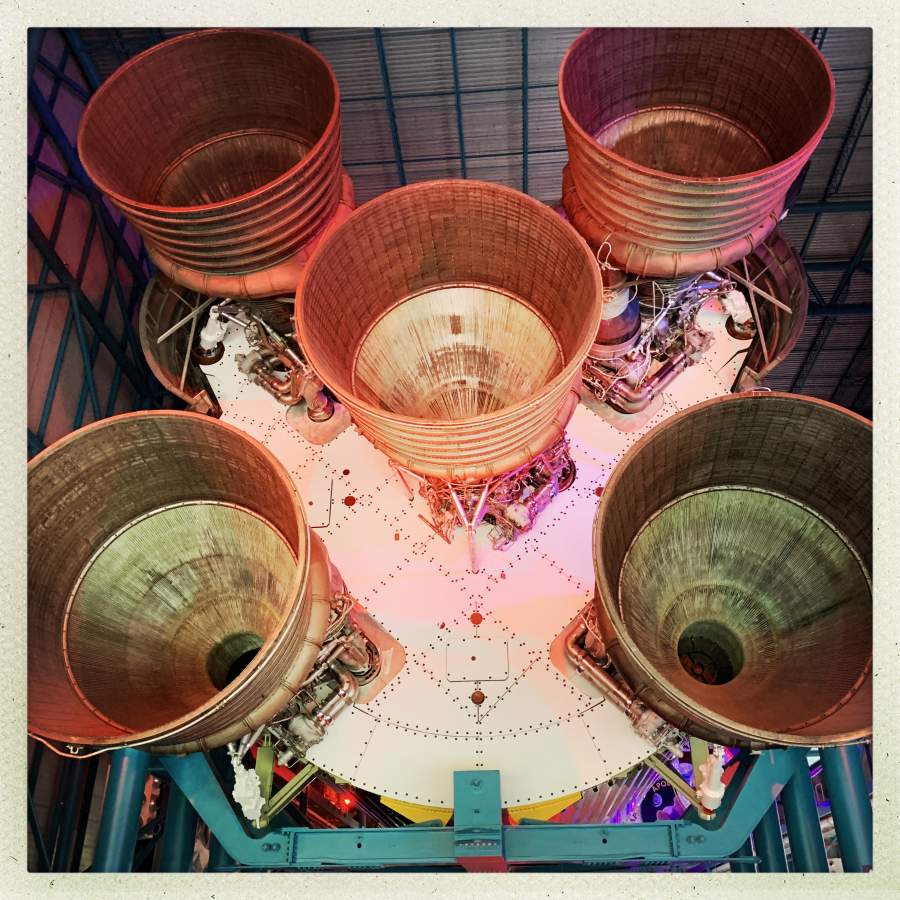 Also: I had one hour in which to explain to 2 dozen high school girls about syslog and how everything logs stuff about everything, and you can learn tremendous things by correlating logs in sequence and matching them to a theory of an event. As I was talking, I realized how “over” internet security I am; it’s a topic I have been trying to get people excited about for 30 years and now we’re just finally starting to see auditors insist that people turn logging on their devices.

Unrelated but related to syslog: I wonder if the New York City power outage has a lot of people looking through their event logs, wondering it was a demonstration of a cyber-capability. I’d rate the odds at almost 20%.

There was a lot of “let’s go to Mars!” stuff, which I understand. But it grated a bit. I would prefer to see “let’s turn Earth back into a garden” but that’s too late and “let’s get rid of all the politicians” isn’t going to happen either.

SpaceX has a “feel the heat” rocket launch viewing tour package, which gets you as close to the launch as is legally possible. If I had a bucket list, this would be on it. I expect I’ll go for a launch this fall. [spacex]

Penn Jillette: “Set your motherfucker to receive” – [jil] a pretty funny take on witnessing rocket launches. It has one of the best oblique jokes about what a poseur Penn can be, which is really funny since it’s coming from Penn.

A Picture I Forgot » « Podcastery