This is one picture from the Saturn-V that I forgot to post. It’s worth it in its own right, in my opinion.

When we walked away from the main stage with its 5 gigantic F-1 engines, we got to the second stage, and stood silently for a while. I don’t know what Bill and Anna were thinking but I was almost moved to tears. Look at the wire-routing on that thing! The connectors! The tie-downs! 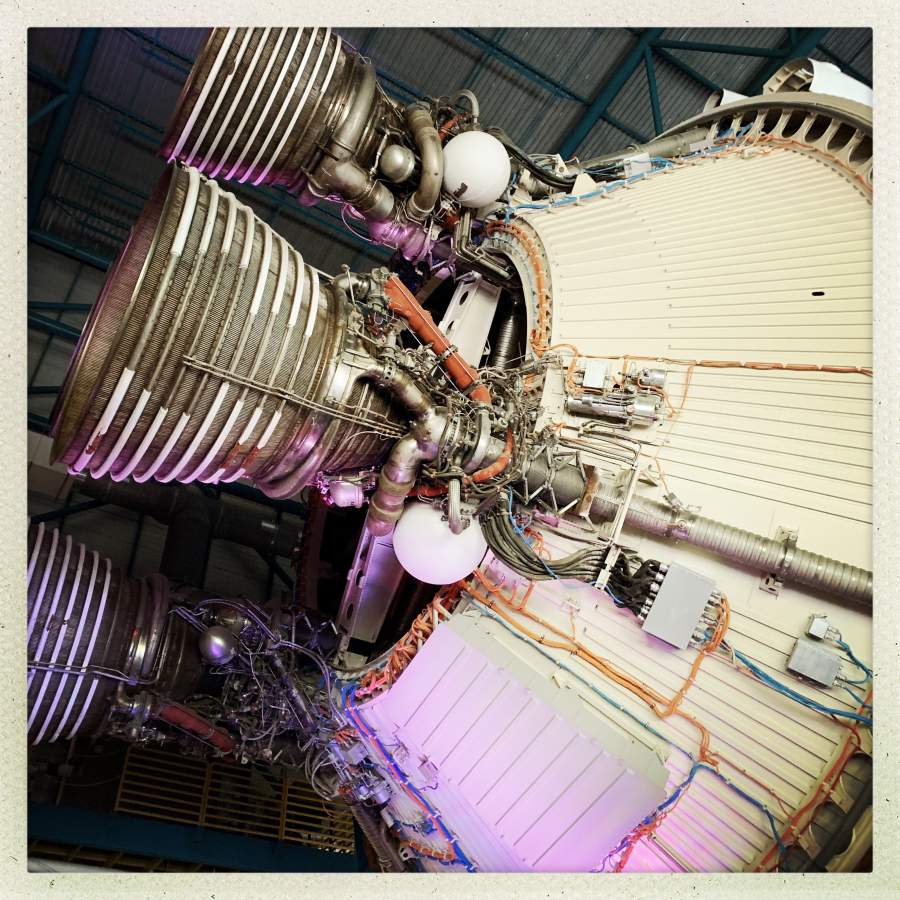 Imagine that you’re assembling your home sound system. You’ve got the amplifier, head/preamp, playstation audio input, speakers, subwoofer, a bunch of wires tying it all together and they need to be distant yet close. If you’re like me, you spend a while thinking about where the wires will go and loosely routing them, then you power it up, test it, and tie it all down. That sound about right?

Then it has to survive 9 gravity thrust and some rather significant bumps like breaking the sound barrier and a few things like that. I don’t think that vacuum is a huge problem for electronics but you’d better hope there’s no housing around some widget that will try to retain pressure and explode.

Every single little thing that you see in this picture was a tremendous amount of worry and concern and attention to detail by the person who made it. And this stuff was all built at high speed – desperation speed. And after Apollo-1’s fire and the loss of 3 crew, everyone knew wiring was really important.

My buddy Ron D participated in the DARPA grand challenge to build a self-navigating autonomous vehicle. Their entry was kicking ass and running way ahead of the competition until it hit a bump and one of the power cables “blipped” a bit and the network hub power-cycled – all the devices attached tried to re-ARP their IP addresses and it made them stall for a fraction of a second in which the vehicle (a modified Honda ATV) slammed into a tree, The connectors were pretty tight but they were designed for a data center not to be rocketing across rough ground at 50mph. That’s a cautionary tale that gets multiplied 100,000-fold when you’re talking about a Saturn-V and this was all done by hand.

It’s a work of art, better than a prayer.