Back in 1992, I was on a project in New Jersey, and had some free time, so I took my camera-bag and my rental car and just … wandered in … to one of the big powerplants on the New Jersey side of the Hudson. There was no security at the gate, no security at the building, and the place was gigantic.

I wandered about for a half an hour before I ran into someone who was surprised to find me there, and I played dumb:
Him: What are you doing here?!
Me: I’m a photographer, and – actually – I am looking for someone I can ask for permission to be here.

In the pre-war-on-terrorism days, that was a fantastic way of deflecting the “caught where you don’t belong” situation: you’re signalling good intent, you’re maybe slightly stupid and clueless, and actually you were trying to do the right thing.

I’ve used that tactic many times, since.

In 2011, I visited Chernobyl, with a small group – we claimed to be photographers doing some documentary but mostly we were there to wander around. At that time, the area was still closed but since then Ukraine has opened it for limited scheduled tours. 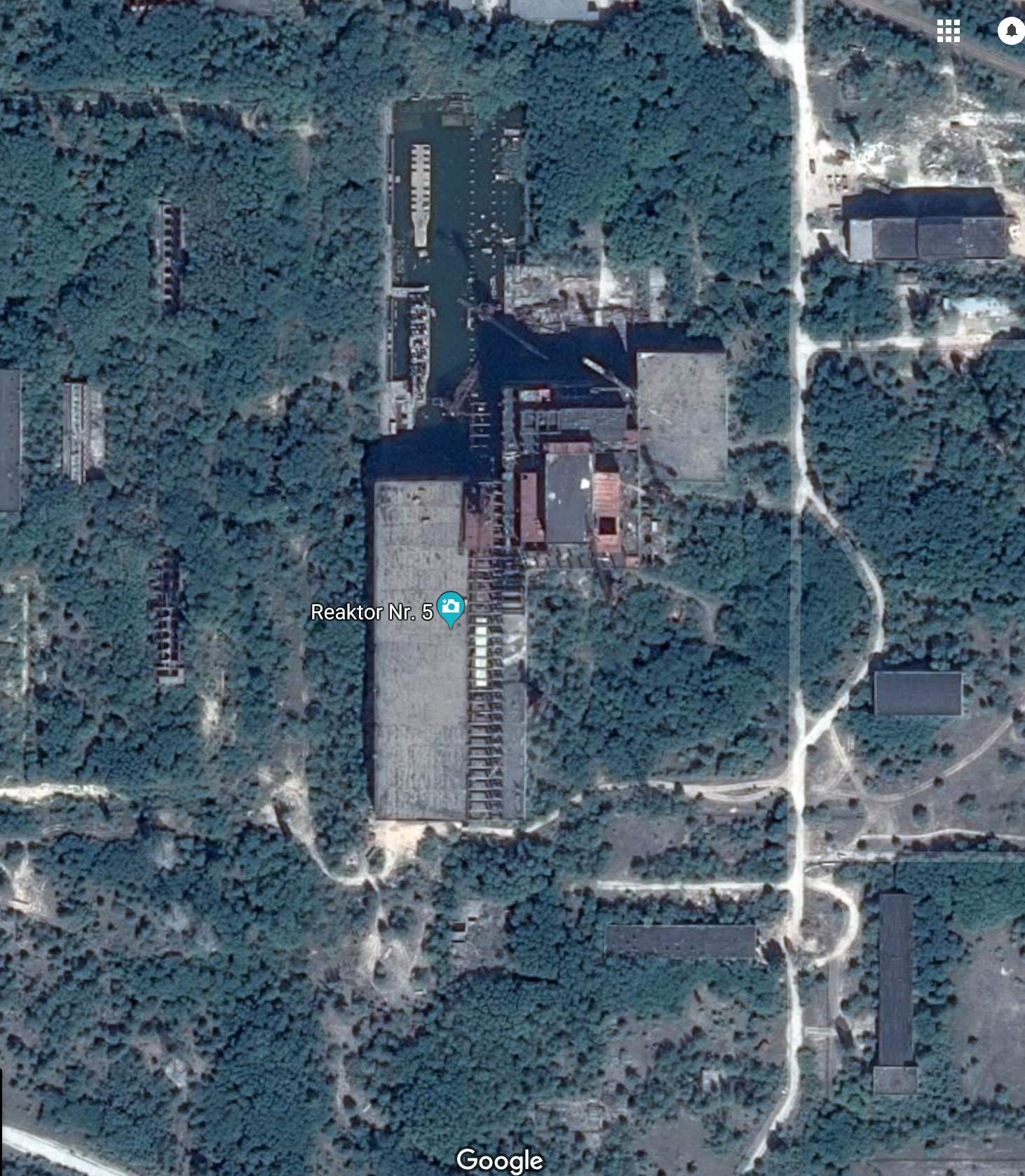 Reactor #5 at Chernobyl. Partially constructed when #4 blew up in April 1986

Part of the fun was wandering around Reactor #5, and trying to figure out what the various stuff is, that you’re walking through. Nothing is there without some kind of purpose, because everything is pretty expensive – so based on the idea that it all has purpose, you ought to be able to infer some of what’s going on from a basic understanding of nuclear reactors and what you’re standing on top of. Sort of. 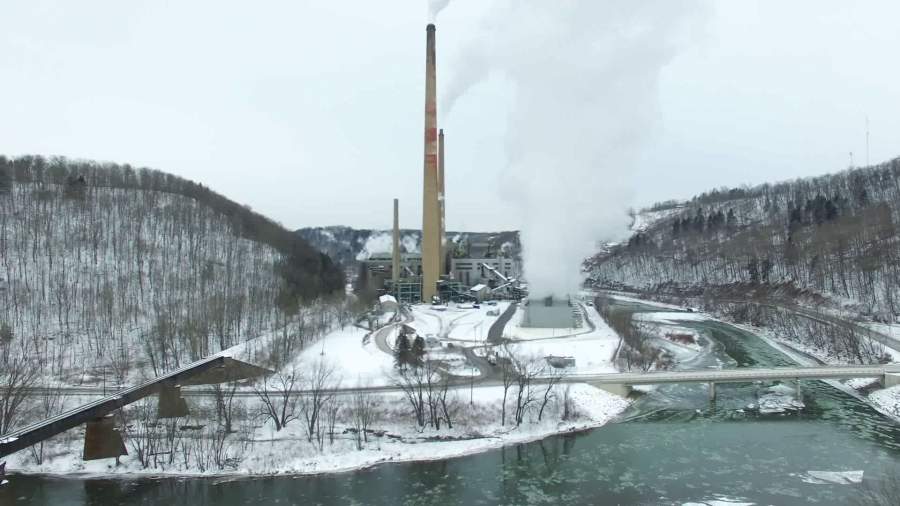 Currently, I live about 10 miles from the coal (now gas)-powered plant at Shawville. The entire plant at Shawville would fit comfortably in the reactor part of the #5 building – that’s the piece at the upper right with the big boxy thing atop it. The rest of the building down and to the left is where the generators would go (they was never installed) and the heat exchangers and refuelling systems would be. The plants at Chernobyl were designed to produce 1,000mw. The power facility I “visited” in 1992 was about the same size as Shawville. They’re all built along the same lines: there’s something that manages a whole lot of energy, and then there’s a generator or three hooked up to it. The plant I visited in 1992, I managed to see the generator – a multi-story tall thing on a concrete pedestal surrounded by walkways. I wish I could take a look inside at Shawville but when I went and asked they were distinctly shocked, then very unfriendly.

The reason I am dwelling so much on scale is because that is, in my opinion, the most memorable thing about these places. They’re not built on a human scale, at all; I’ve heard people use similar words describing the Vehicle Assembly Building at Cape Canaveral – it’s too big to talk about. 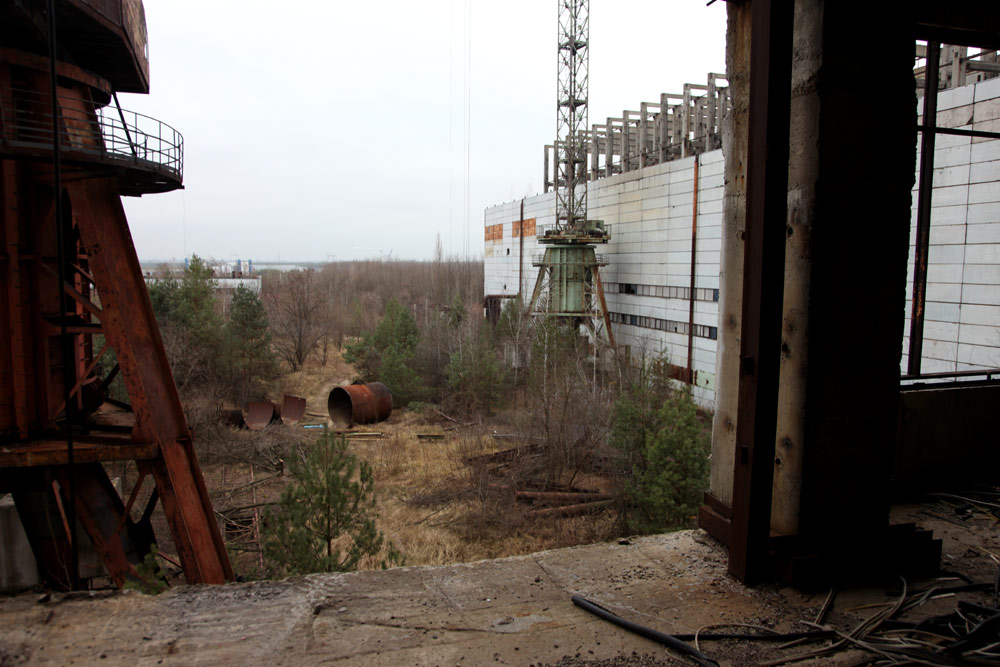 That’s a view from the 4th floor of the reactor building, looking back down toward the generator hall. The gigantic crane, there, barely shows up in the satellite picture. Those pipes on the ground by the crane are the standard size of the pipes everywhere that carried water or steam. You can stand comfortably in them (I’m 6′ tall) and not reach the top. They also make amazing sounds when you whack them with things. 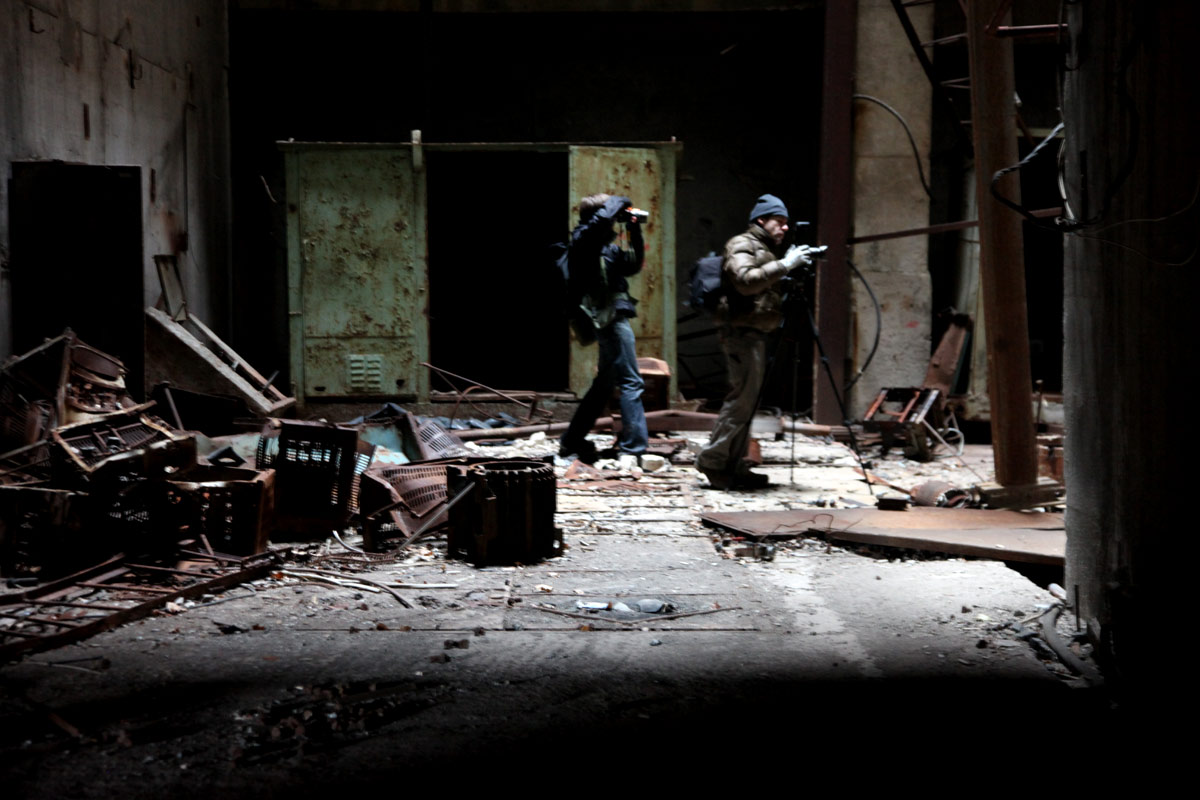 That’s one of the access hallways that leads to the reactor pit. The pit is 4 stories down, the building vanishes up in to the darkness above. This hallway is about the same size and dimensions of a typical 2-track subway line such as you might encounter in New York or Paris or London. All the hallways are built to this dimension, the floors are rough concrete over I-beams and steel sheet – the building is constructed to have heavy machinery operate inside of it. I have no idea what one of those nuclear fuel rod canisters weighs …

Also, notice how all the copper is gone. Sure, it’s radioactive (the background radiation level in the building was about 10 times what it is at my farm in Pennsylvania) but it’s copper – it’s money. Everywhere you’d expect to find wire, there were piles of cut and shredded insulation. People are getting recycled radioactive copper, all over Europe. 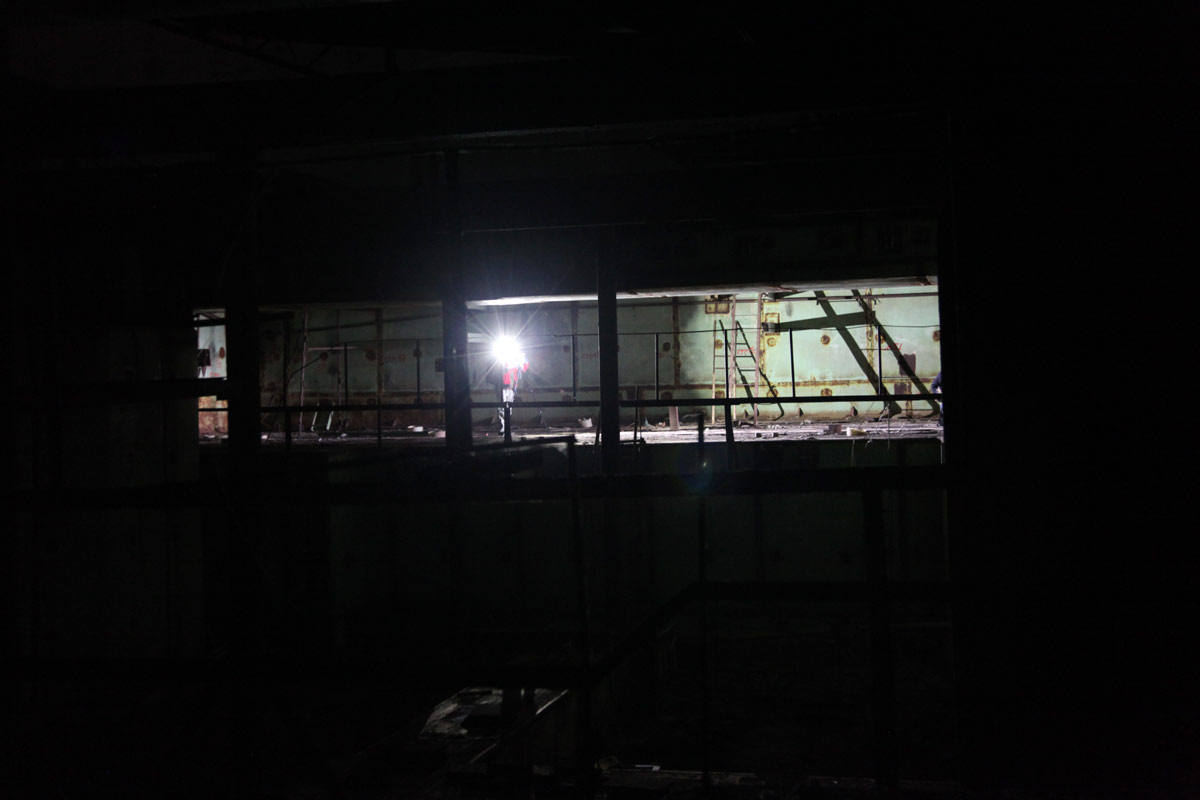 While the other guys were setting up lights to do pictures of the core, I ran around the other side and took pictures of them taking pictures, to give a sense of the scale of the place. In the process, I nearly fell down a gigantic elevator-shaft in one of the floors, which went about 6 stories down to concrete. That was when I decided that one does not move fast in a place like this. 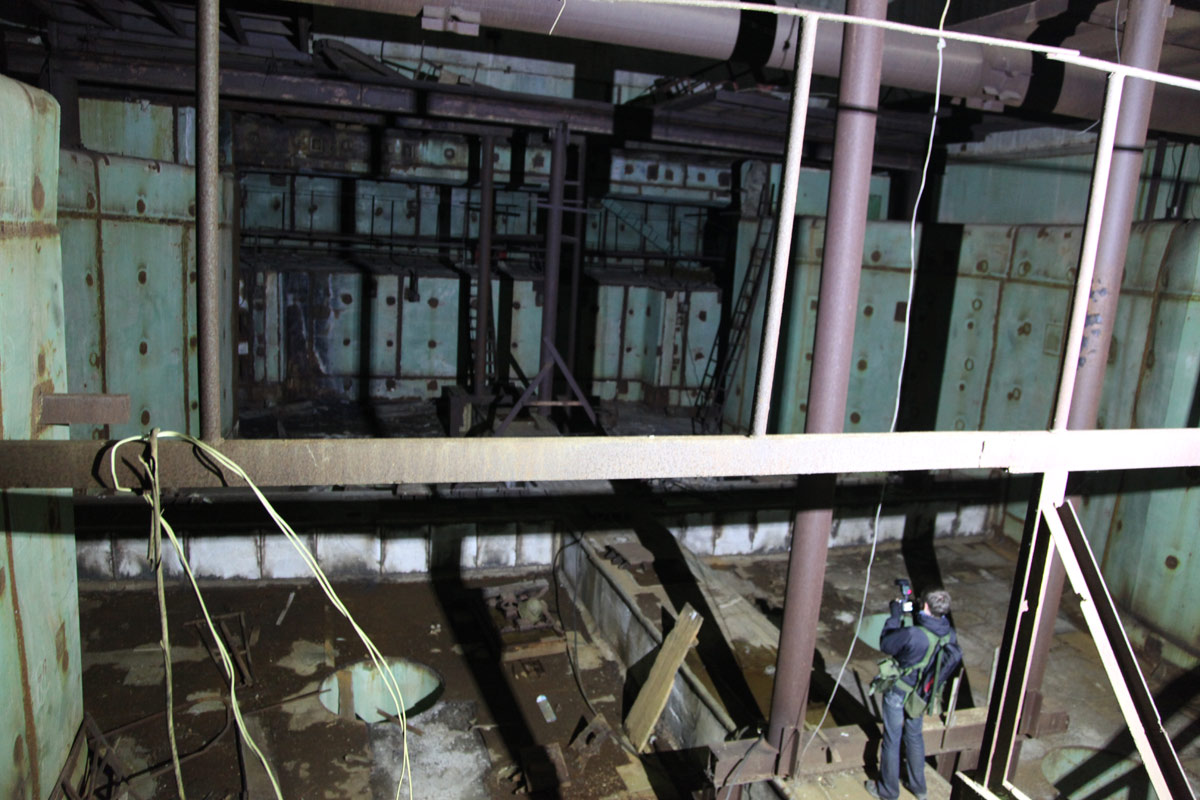 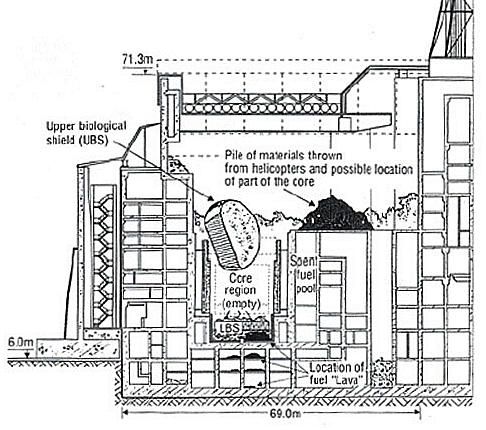 There are so many interesting things in the picture above. First off, that’s the pit where the reactor would sit. I believe that, once it was assembled in place, it was surrounded with sand – the sand that fortunately and accidentally vitrified the uranium at Reactor #4, as it leaked out the bottom of the room. See those gigantic pipes in the floor? I believe that’s where the water came in, to get heated, and go back out. Those pipes run under the entire building and over to where the generator is. If you look at pictures of the disaster at Reactor #4, it’s one of those pipes that the “elephants’ foot” of vitrified nuclear fuel is seeping down. 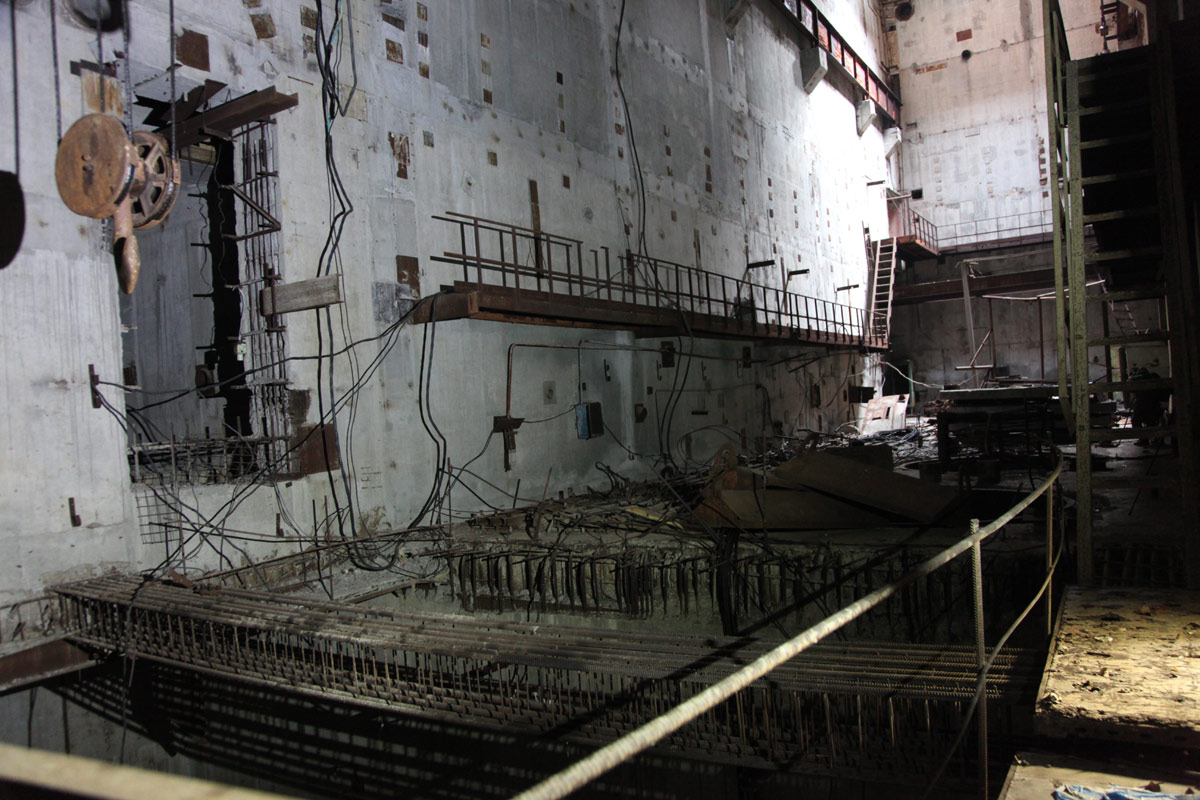 Between the generator room (which was just a huge empty space with gigantic concrete mountings) and the reactor, was a connecting gallery with great chain-winches and holes in the floor that went way down into what I assume were fuel storage pits, or cooling-off pits for used fuel. Down, through some of these holes in the floor, were drops of about 6 stories to a railroad track, which I assume was the train for removing or bringing fuel. 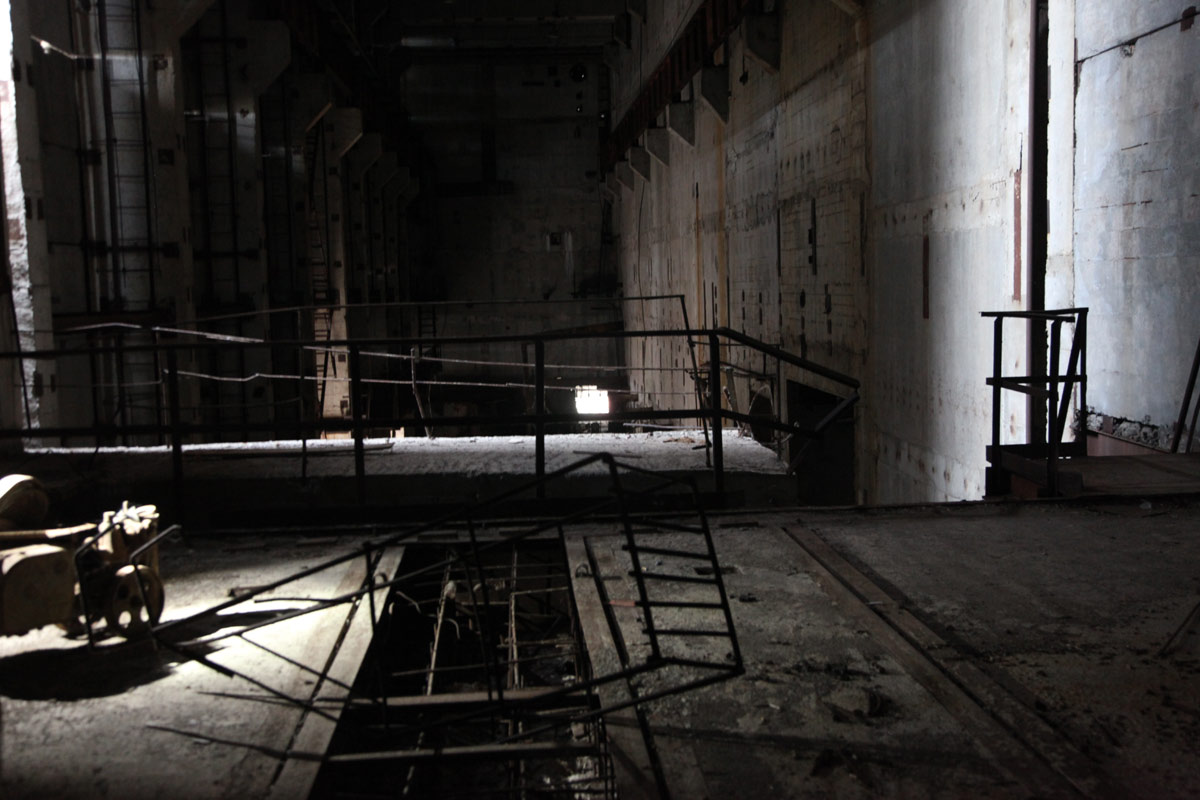 The refueling-hall from the perch high above where (presumably) the controls for the hoist were going to be located. See the big rails upper right/left? Those are what the chain-fall hoist ran along. 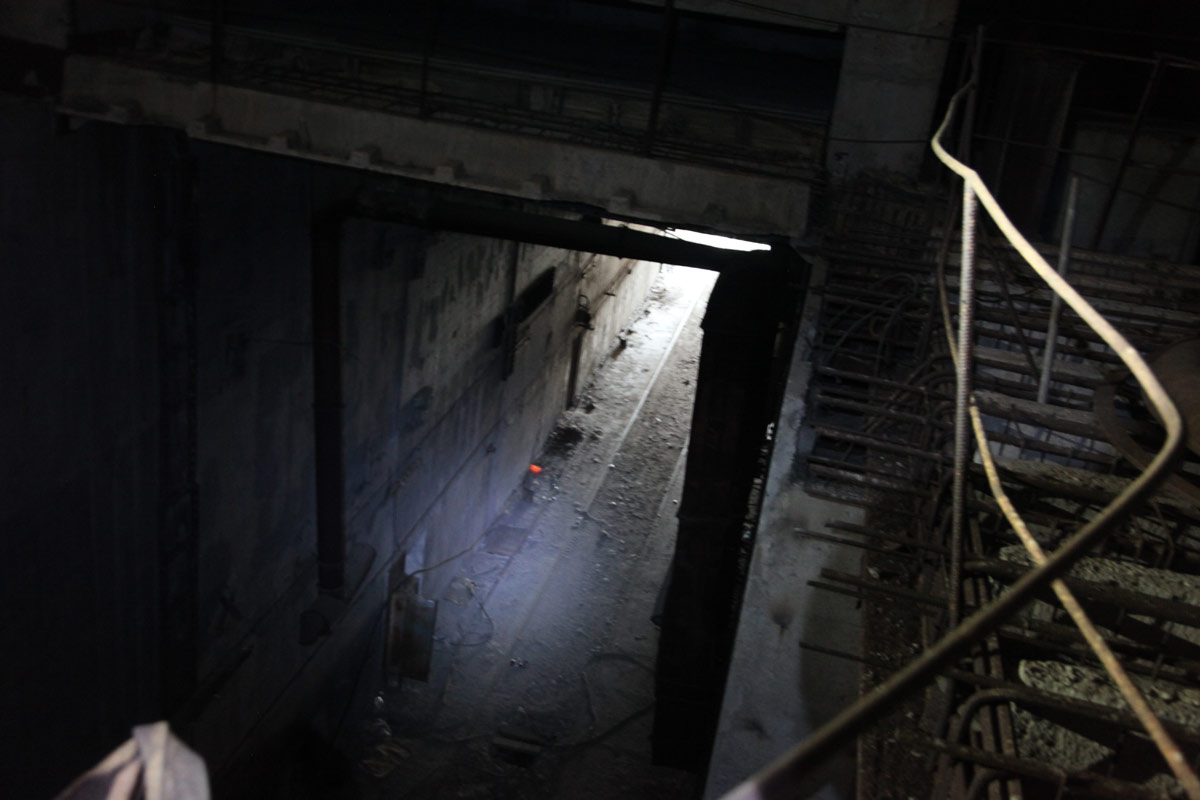 Six stories down, there’s nice soft concrete to catch you if you fall. That is what I believe was the refuelling railway. Note the rebar safety-rail. 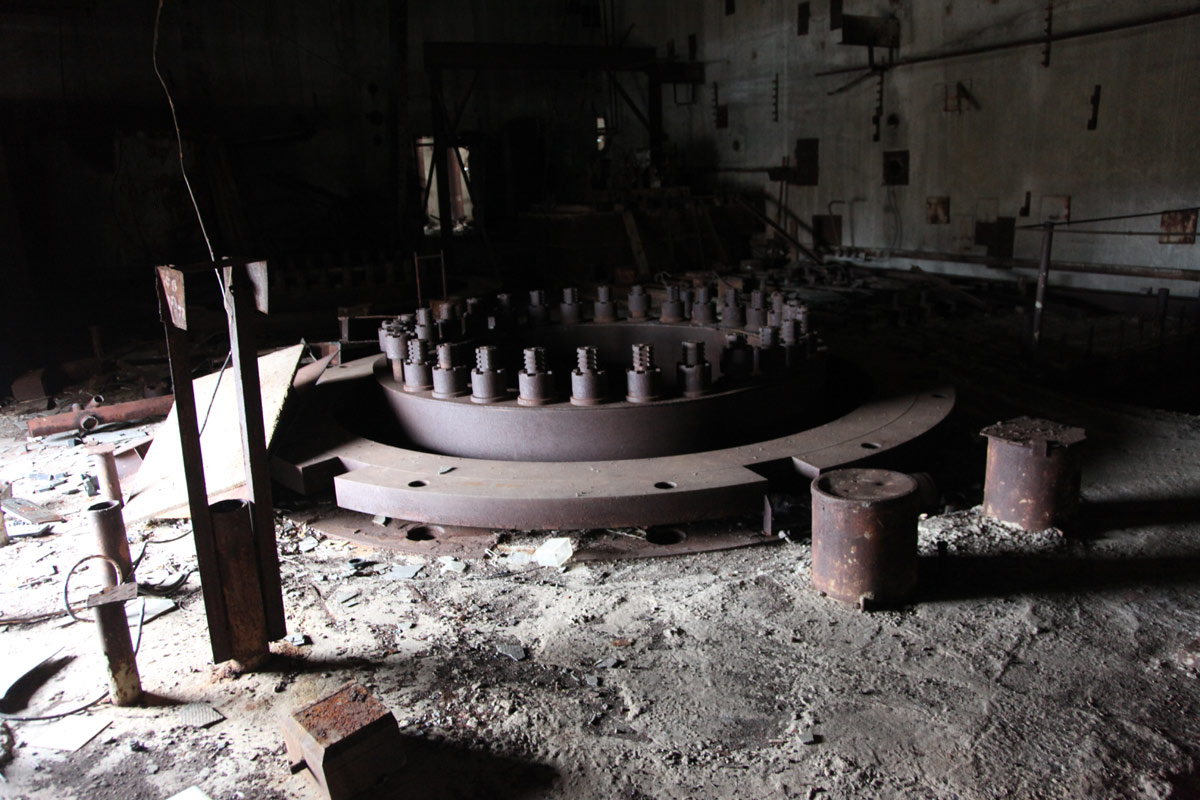 One of the flanges for a steam or water pipe. There are many flanges in the world, but you’ve got to admit that if flanges had royalty, that’s the duke of flanges. 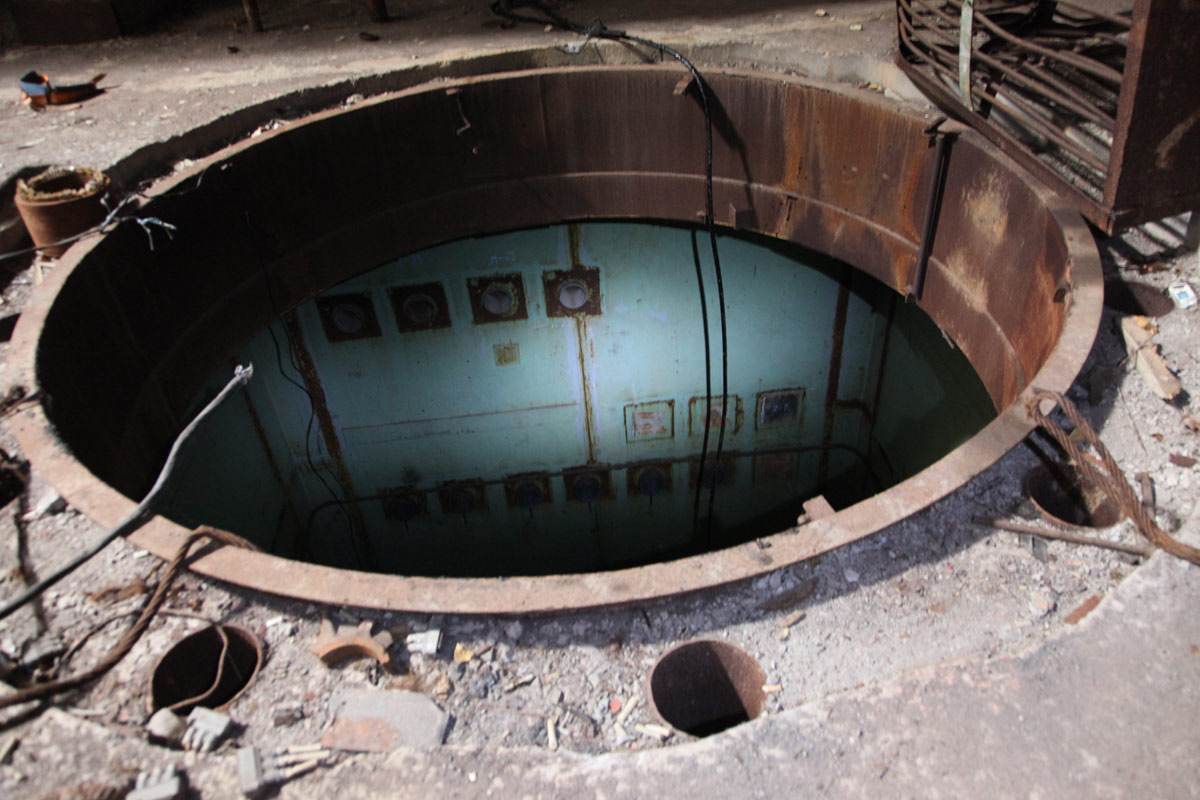 One of the fellows in the group was British and referred to these as “bottomless plungeholes” which was a pretty good name. It looks like a fuel storage pit, with lots of places for water to move around. There were little concrete disks stacked up for using as lids.

The main reactor has a concrete lid, too. Reactor #5 hadn’t had its constructed and installed, yet. The reactor lid is 1,000 tons of concrete and steel – when Reactor #4 blew (it was a hydrogen explosion, same as Fukushima) it flipped the 1,000 ton concrete lid up like a tiddly-wink, and it landed at an angle in the ruined remains of the pit, making it harder to douse the fire. 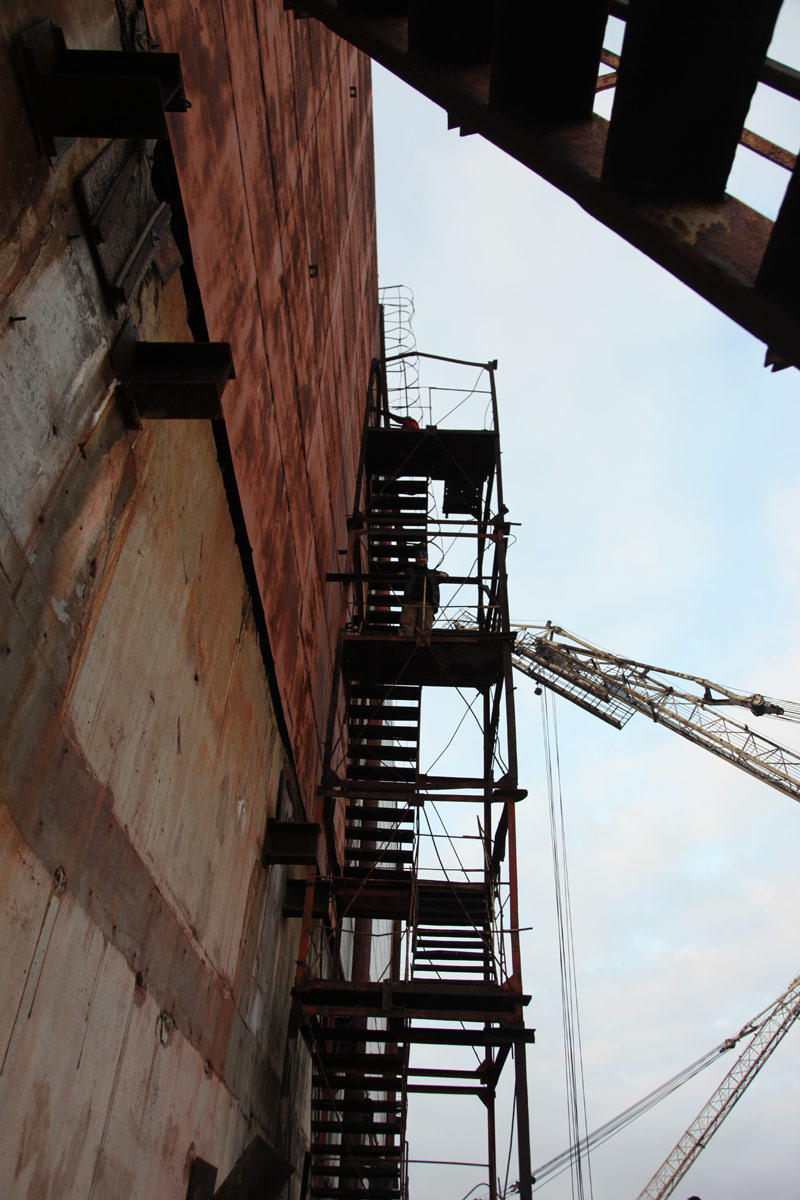 Those plates are 4’x8′ 1/8″ steel plates, tack-welded onto pieces of rebar that stick out from the concrete. The buildings are not “painted rust-color” they are made of rust.

From the roof of the reactor hall, there is a maintenance stairway that goes another 5 stories up to the top of the building. The guys I was with were all late 20s and early 30s and I decided I didn’t need to make a point about the fact that I was going to be celebrating my 50th birthday soon. I was carrying a huge Alice pack of gear (including the coca-cola and peanut M&Ms that were all I ate during the 3 days I was there, and a trolling boat battery with an inverter)(I turned out to be the battery-charging station for the whole group) so I let them go and caught my breath. As it was, I got a weird sort of revenge: when they were most of the way to the top, in that little cage-ladder (made of rebar) one of them said “hey, it’s kind of shaky” and I took a look and noticed that the entire goddamn stairway is not yet welded to the wall. I yelled up something to that effect, and they had a good look around from the roof and came down very carefully, one at a time. 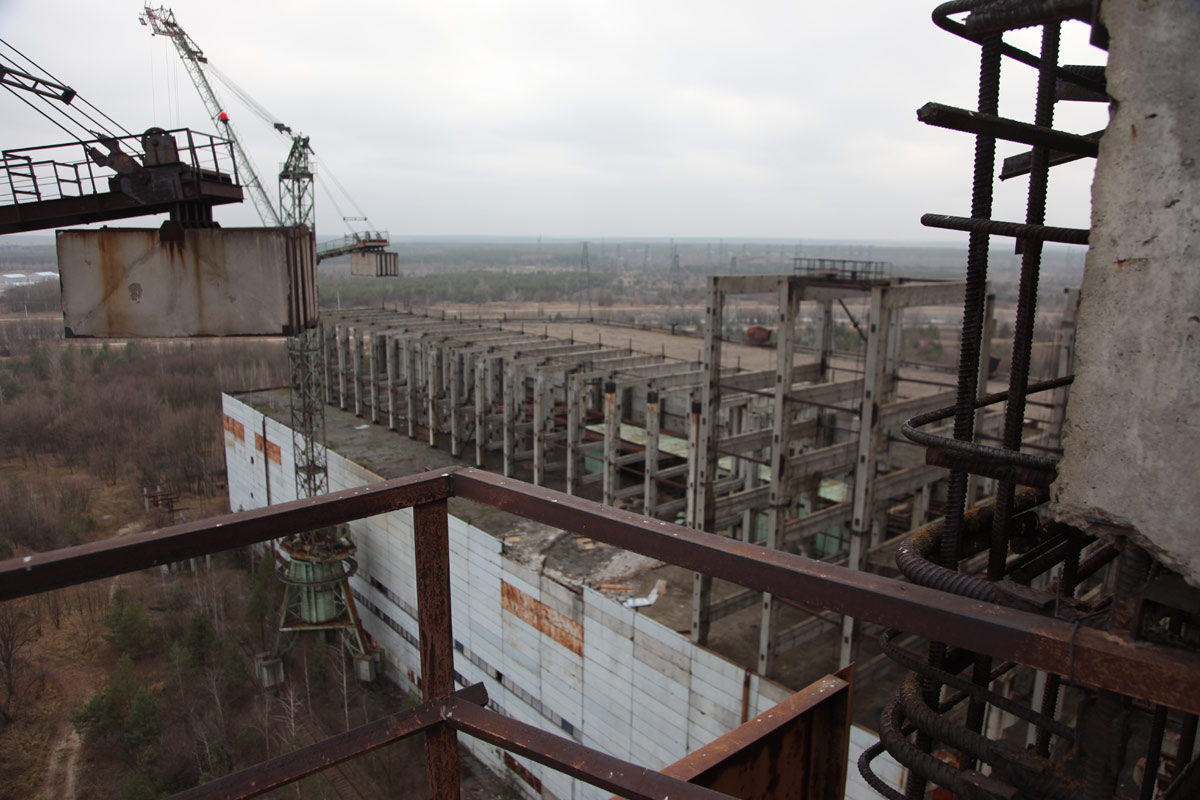 I believe all the ferroconcrete arches above the roof of the generator hall are external strengthening (like the flying buttresses on a gothic cathedral) to keep the walls from collapsing inward when they use the chain-fall hoist. 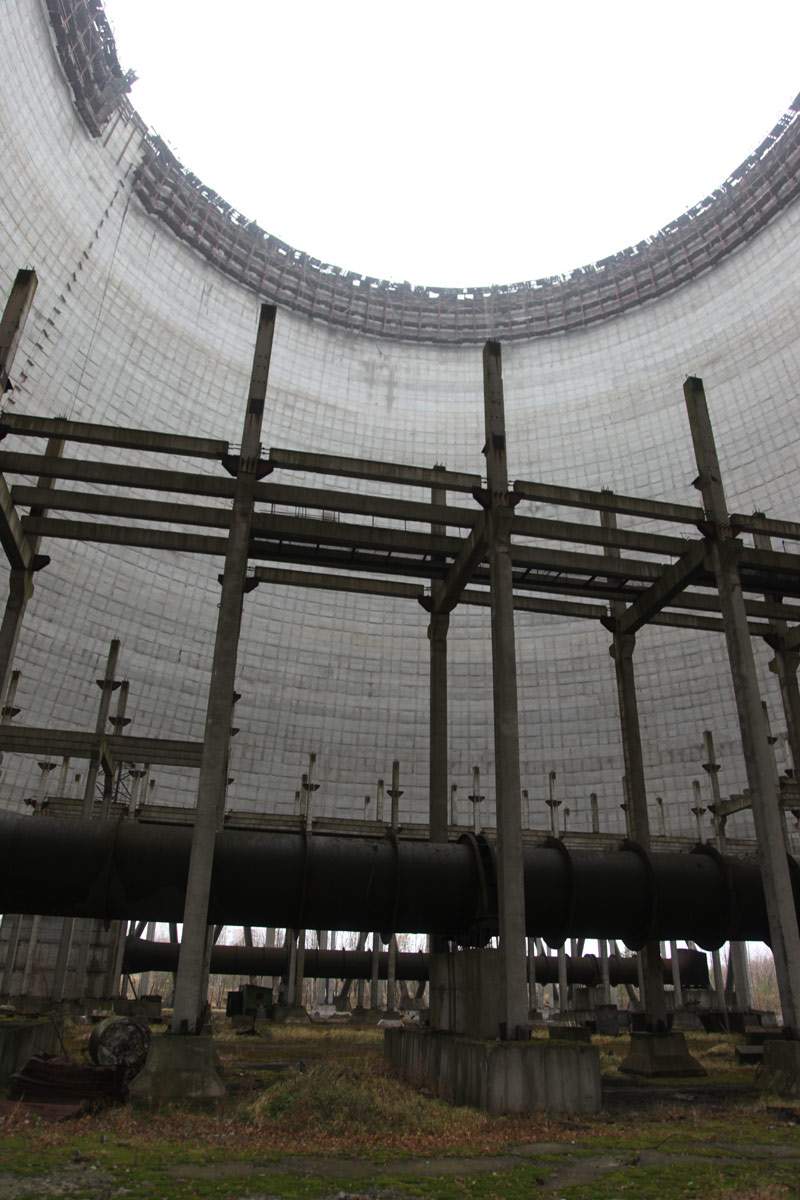 One last image to illustrate the scale of the place. This is inside of the cooling towers for #6, which are about 3/4 of a mile away. The cooling system is pretty amazing – there are huge pipes that come through and the water gets dropped into galleries that presumably allow the heat to leave, then it’s collected at the other side. The tower’s shape is curved to increase the air-flow of the hot air rising, and to suck new cool air in from the open area at the bottom. It’s big. Really big. It appears that one constructs a cooling tower by making a concrete form out of plywood, weaving the rebar in, then filling the form with concrete, and constructing the next layer of form 8 feet up. See the rectangular textures on the walls? Those are the shapes of 4×8′ standard sheets of plywood. The acoustics in there were amazing.

We looked at the ladder up, which runs along the left side, and decided that there had been enough adventuring on rebar ladders that day. Especially when I offered to stay below with my camera on video record, so I could get the echoes of their screaming if the ladder failed.

Timeline of the disaster at Reactor #4 [chernobylgallery]

One of the guys I talked to when I was there was a welder, who was working near the top of Reactor #5 when #4 blew. He said that the weirdest thing (to him) was that his eyes were filled with these weird blue-green swimmy dots for a few minutes. I had to excuse myself from the table and go to the bathroom.

I do think that humanity needs to be developing safe small nuclear reactors, that can be moved for emergencies, or to provide power where it is going to doubtless be needed as the global warming crisis starts to really sink in. The problem I have is that the ideas “small” and “nuclear reactor” don’t fit together in my head. Another thing is that nuclear reactors should not look like they were made by hammering shit together. I want nuclear reactors that look like fine British-made timepieces, not rusting stuff that looks like it was tack-welded by someone on a ridiculously unachievable schedule.

Charles Stross describes a trip to one of the peak nuclear reactors [stross] – Torness. Stross can really write, unlike me, his descriptions are better.