I haven’t commented much about the whole “Russia propaganda” thing because I am hyper-sensitive to propaganda in general and tend to assume that anything I see which is remotely political is (at least) positioned, spun, focus-grouped, culture-optimized and targeted. If it’s not that, it’s got product placements embedded in it, or is advertising or priming some kind of ego-gratification that can be triggered with a purchasing ad later. On Twitter, which I read occasionally, I read a very small number of posters – mostly Banksy and Shiv, and I understand that there are underlying politics at play, in both of those streams. 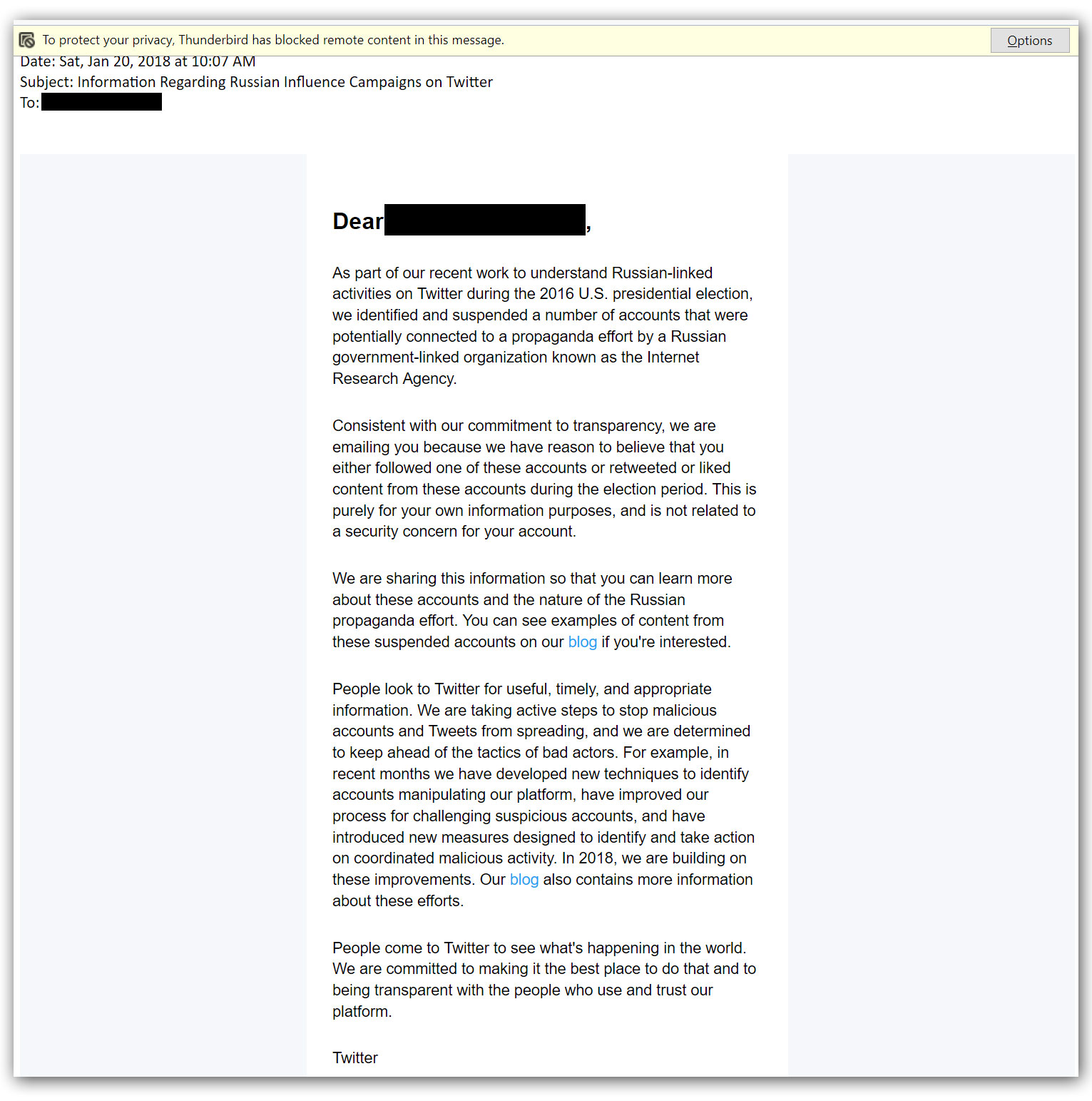 “As part of our recent work to understand Russian-linked activities on Twitter during the 2016 U.S. presidential election, we identified and suspended a number of accounts that were potentially connected to a propaganda effort by a Russian government-linked organization known as the Internet Research Agency.”

Go back, and scrub your mind of any of those comments you may have liked.

“We are sharing this information so that you can learn more about these account and the nature of the Russian propaganda effort. You can see examples of content from these suspended accounts on our blog if you’re interested.” 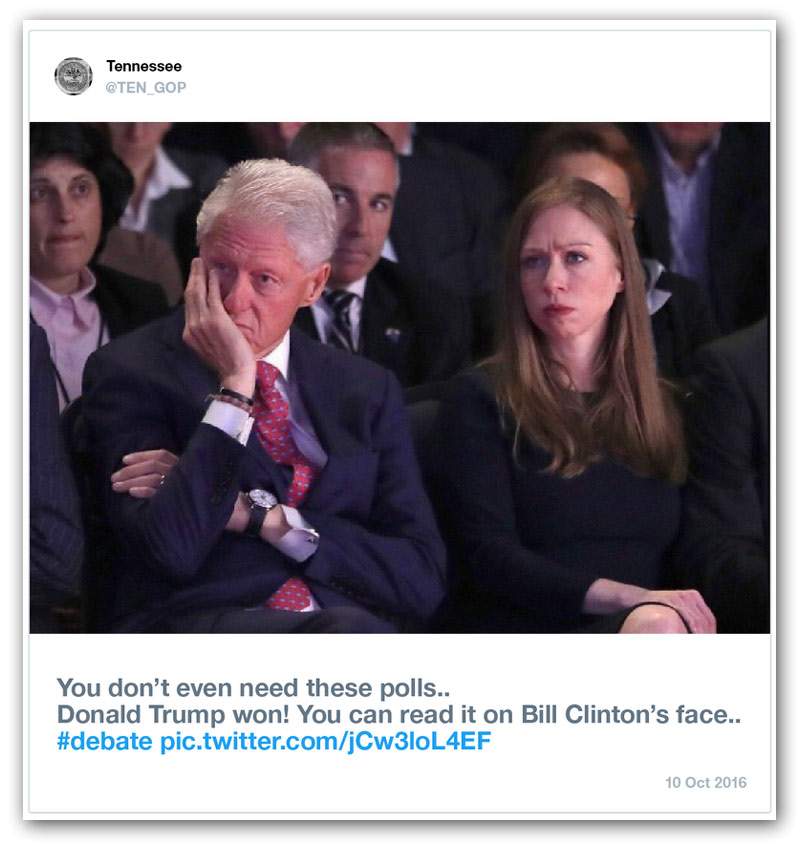 That is democracy-threatening propaganda? I don’t want to see alarmist but if that can threaten democracy, then democracy probably is so weak and stupid it deserves to die.

The solution to this problem is not stupid notifications like Twitter’s, it’s to: BE MORE CYNICAL. Be more inclined to assume that politician is lying if their lips are moving. Be more likely to assume that if a product needs to advertise that it’s probably shit. Be less likely to buy a pair of sweatshop-made shoes because they appear in a movie (the soles will probably come unglued anyway) besides, they’re selling for 100 times what they cost to make.

Twitter, as a part of “big marketing” can’t say that. Twitter’s only value proposition is that they act as a pipeline (Facebook, etc, too) to directly mainline marketing felch-spit into your brain. They have a problem: now that they’ve taken a ton of money to push any old propaganda now they want to try to tell you which is the right propaganda.

Facebook, for example, has been helping to correctly tune your propaganda-feed by meeting with Israeli government officials to determine which Palestinian accounts are “incitement” [intercept] but that’s all OK because, see, Israel is not Russia.

“The Israeli government and Facebook have agreed to work together to determine how to tackle incitement on the social media network.” These meetings are taking place “as the government pushes ahead with legislative steps meant to force social networks to rein in content that Israel says incites violence.”

So, suppress one message while amplifying another; that is the essence of propaganda: [haaretz]

The Prime Minister’s Office is planning to form, in collaboration with the National Union of Israeli Students, “covert units” within Israel’s seven universities that will engage in online public diplomacy (hasbara).

The students participating in the project, who would post on social media networks such as Facebook and Twitter on Israels behalf, will be part of the public diplomacy arm of the PMO, but would not identify themselves as official government representatives.

Meanwhile, I occasionally stumble across Facebook postings that are jingoistically pro-military – they’re not an incitement to violence because it’s proper red-blooded Imperial Violence, socially sanctioned, Grade-A. It’s the best. “Hasbara” by any other name, is just as sweet. 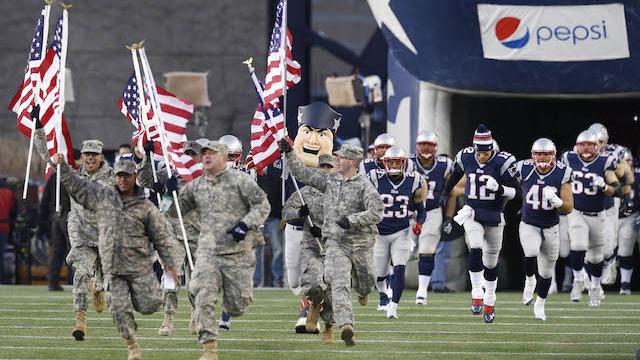 Prepared by U.S. Sens. John McCain and Jeff Flake, both Arizona Republicans, the report found that all military branches reported spending $53 million on marketing and advertising contracts with professional sports organizations between 2012 and 2015. More than $10 million of that went to the NFL, MLB, NHL, NBA and Major League Soccer.

Do you think that sportsball attendees are going to get an email explaining to them:

During the last season, we exposed you to patriotic displays that were sponsored by the US Government’s Department of Defense, as part of a subliminal recruiting program. We have posted a few links to some of the US Government’s propaganda in our blog, so that you will recognize it next time they want you to get all misted up and cheer and salute the disadvantaged lower-class who are fighting imperial wars so that you don’t have to be aware of all the violence your government is doing in your name without your approval.

Here’s some propaganda it took me seconds to find on Facebook: 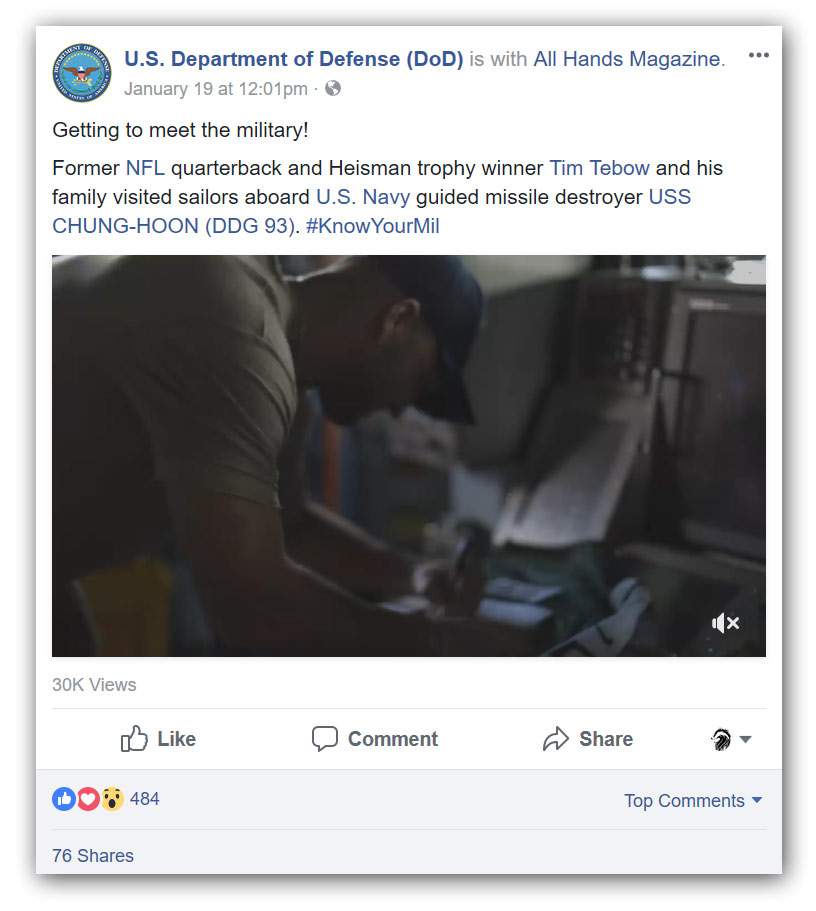 Does anyone here think for a fraction of a second that Tim Tebow was not paid for that walk-on? How much did that cost the taxpayers? By the way “All Hands Magazine” sounds, you know, independent – you would have to engage your brain and do some research for a few seconds to realize that it’s US Navy published propaganda. (little letters: “Official Website of the United States Navy.”)

Next question: that posting has 76 shares – does anyone want to guess how many of those “shares” are follow-bots? Honestly, I’m too bored and disgusted to go look at some of the shares and see if they share or follow anything else. The astro-turfing companies are getting pretty good at making their followers look real, so it might be hard to tell.

Now, I’m in a quandary: is Twitter’s trying to spin themselves as anything more than a conduit for ads, LOLcats and propaganda – itself – propaganda? Oughtn’t it be obvious even to a LOLkitten that this is all a great big stream of lies?

The two-party system simultaneously pats itself on its back about how much money it is able to raise and spend on each election while claiming that the money really doesn’t influence the candidates’ politics at all. You are supposed to believe that because: Democracy! 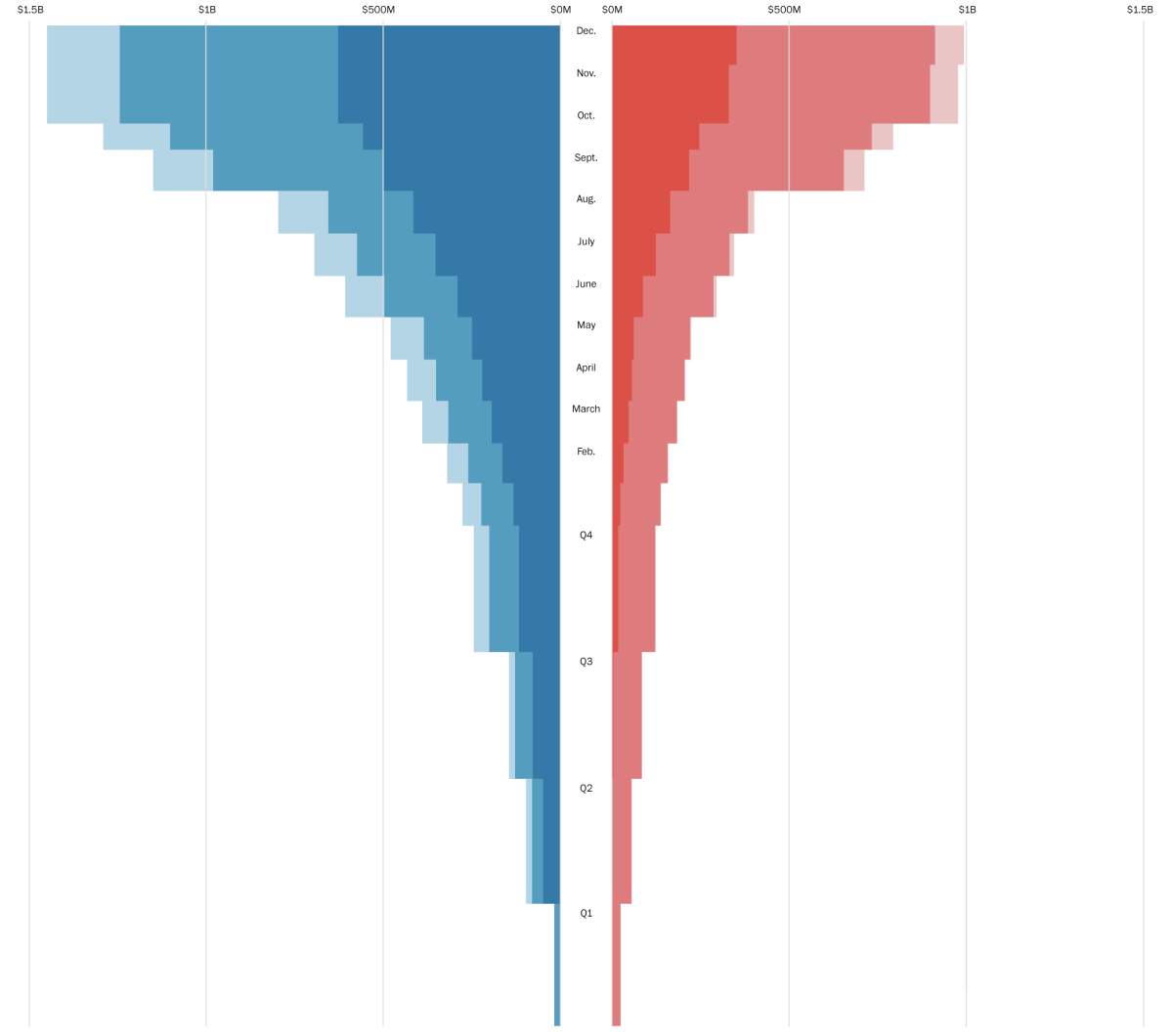 Between Clinton and Trump, it was a bit over $2bn (or, 1/40th of the amount of extra funding Congress gave the DoD last year, that the DoD didn’t even ask for! The DoD can buy ads now!)

Robert T. Morris, Sr., the NSA’s chief scientist, was at a barbecue with a small bunch of us in the early 1990s, and said something I’ll never forget: “The surprising thing about ABSCAM wasn’t that congressmen are for sale, it’s that you or I can afford one.” If the Russians really were able to influence the election so profoundly with $100,000 of ads, does that mean that if I spent my own money, I could have a significant impact on the next election? Here’s the problem with that thinking: Robert Mercer did exactly that, and so did Steve Bannon and Breitbart, and Meg Whitman and Warren Buffet and so on and so forth. They all spent lots of time and money and apparently, somehow, the only time and money that made a big difference was Russian?

Interestingly, of the 14,000 Twitter followers I bought, I still have 13,000. I had 2,000 legitimate followers before that, so give or take 10,000 of my bot-herd appear to still be “reading” my intermittent snark-droppings. [stderr] Maybe one of these days I’ll pay for the premium “commenters” on instagram and have some neural networks say nice things about everything I post. Except then I’d have to, you know, post. 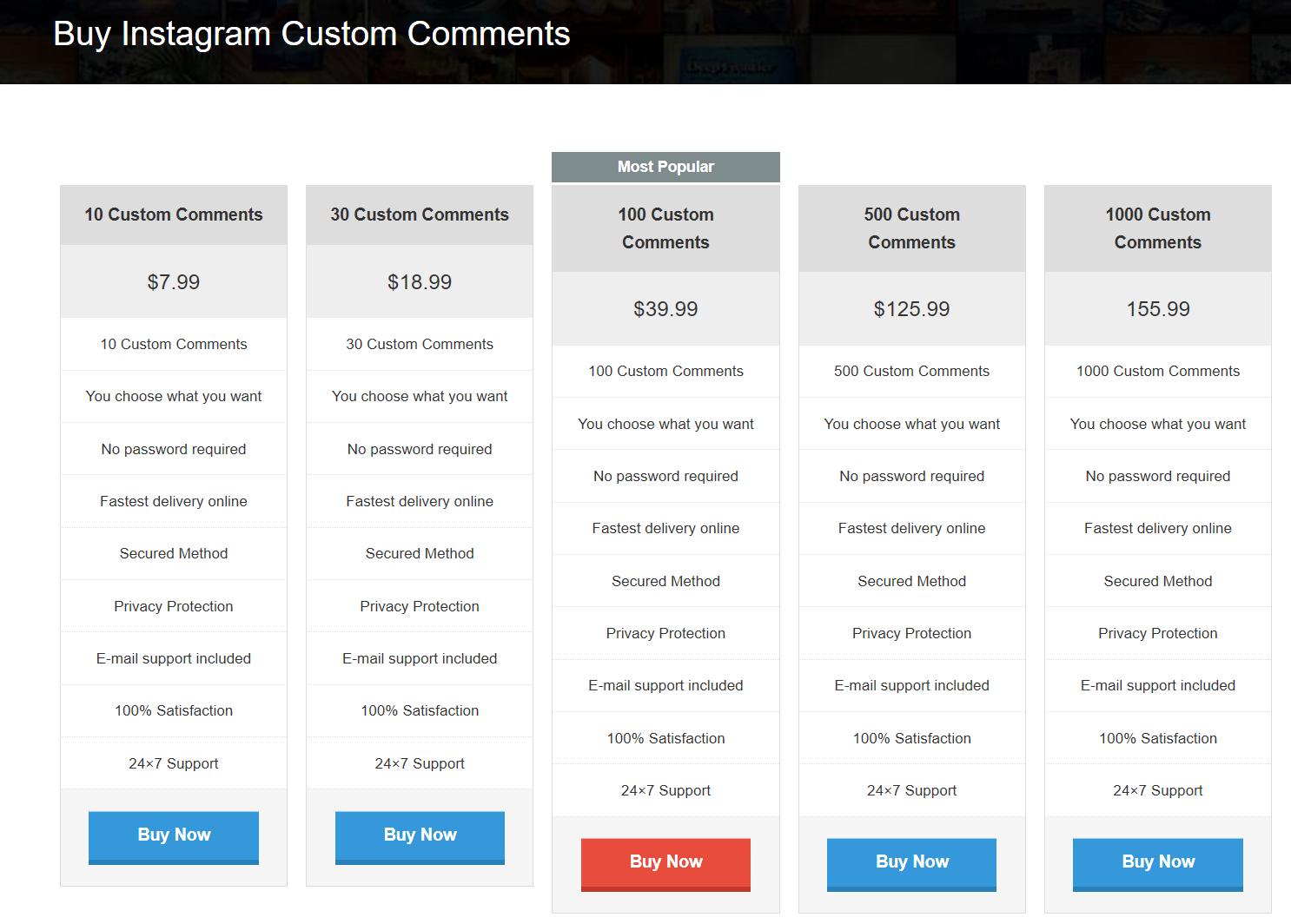