Spook stuff fascinates me, because it’s the unwritten side of history; things that happen covertly can have huge impact, but are never publicly known. For someone like me, who is fascinated – maybe obsessed – with causality, spook stuff is a great cause of many things that we generally never know. Which means, our ability to understand the world around us is permanently compromised.

Years ago, I heard that Ho Chi Minh had asked president Truman for the US’ support in Vietnam’s declaration of a democratic republic, which Ho expected the French to suppress. Sure enough, the French did, and the rest (as they say) is history. 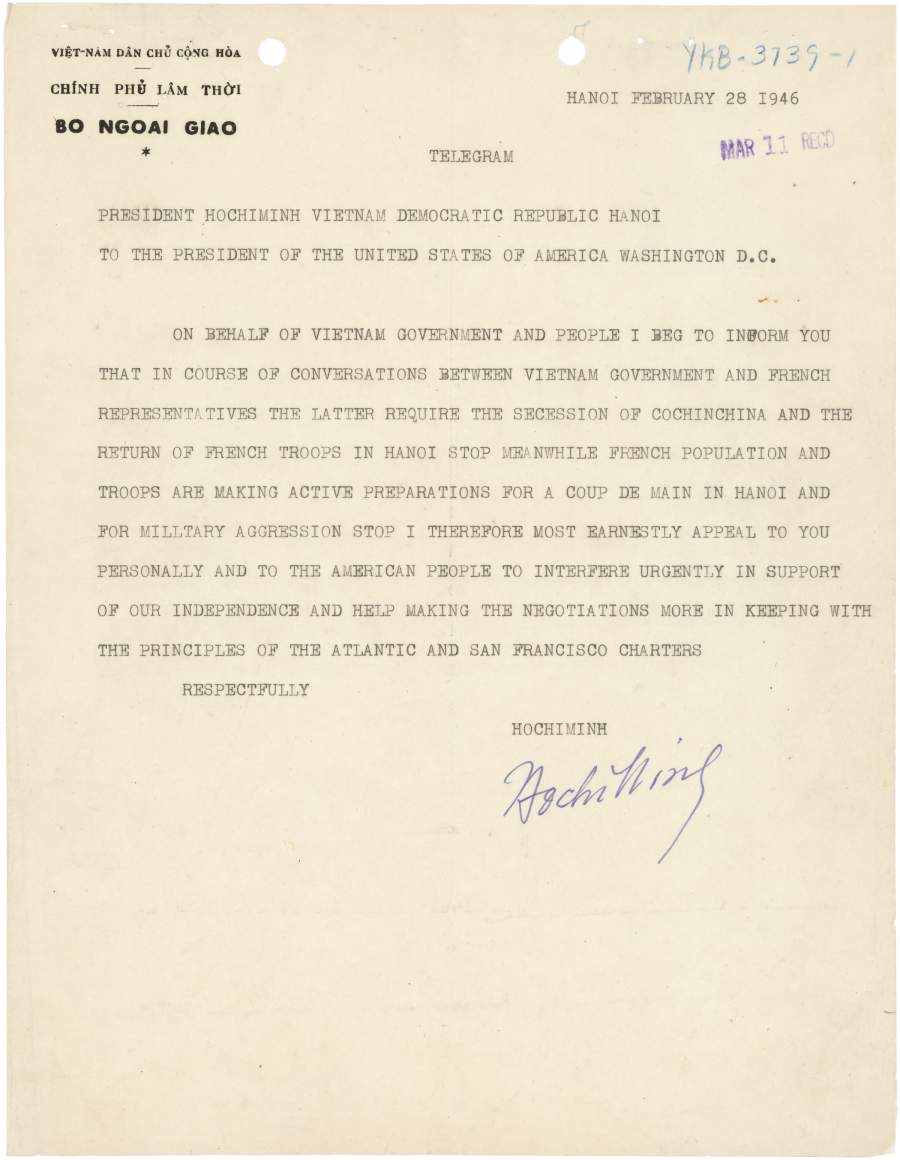 His reference to “the principles of the atlantic and San Francisco charters” is to the founding of the United Nations – which, we recall, was to prevent superior military powers from attacking inferior powers. As Truman said during the signing ceremony:

“If we fail to use it,” he concluded, “we shall betray all those who have died so that we might meet here in freedom and safety to create it. If we seek to use it selfishly – for the advantage of any one nation or any small group of nations — we shall be equally guilty of that betrayal. “

That was 5 months before Ho Chi Minh’s letter. The People’s Republic of China, and the Soviet Union recognized the Republic of Vietnam but France, and the United States – and the UN – did not. A tremendous amount of blood was spilled resolving the issue.

I’d heard of this letter before, naturally – many historians point to it as one of the moments in the history of the time, part of a chain of cause and effect that ended with over 1 million dead Vietnamese, and fifty thousand colonialist French troops and a comparable number of Americans.

So, you may imagine my surprise when Les Gelb, who was part of the team that assembled the Pentagon Papers, mentioned it. It was a sort of casual aside as Brooke Gladstone was interviewing him for the On The Media podcast [otm]: (@8:31)

Gelb: The notion that we had access to everything under the sun, and that this was some definitive history – it’s just plain wrong, Brooke. Because we didn’t have that kind of access, and we never were allowed to do any interviews.
Gladstone: So, give me an example of some of the more significant short papers that made up the pentagon papers?
Gelb: There were papers about the initial involvement – a monograph about the initial involvement in Vietnam – about Ho Chi Minh writing letters to Harry Truman. And, interestingly, I just have to tell you this, Brooke, when the CIA gave me those letters, they were the original letters. So, I thought to myself, “What is the CIA doing with those letters? Weren’t they given to Harry Truman?” I didn’t know if they ever really were.
Gladstone: (muffled snort)
Gelb: And there’s nothing in Truman’s memoirs to say that he received them.
Gladstone: Are you suggesting that there is at least a possibility that those letters were intercepted before they made it to Truman?
Gelb: Well, they were given to the OSS operative in Vietnam…
Gladstone: … Which is the precursor organization to the CIA…
Gelb: … and he sent them right to the OSS in Washington. And they were in the CIA files.

It is an interesting question. There’s a good chance that Truman did hear of the letters, but there’s an equally good chance (I would say) that Ho Chi Minh’s attempt at diplomacy got shelved by some OSS intelligence officer. It probably wouldn’t have changed anything, anyway.

I’m skeptical of the “deep state” and have said elsewhere that I tend more to suspect an emergent conspiracy – and almost always it’s a conspiracy to hide incompetence. The deeper conspiracies are to hide corruption or abuse of the system. Probably, a few times in human history, there have been grand conspiracies – but mostly I think people aren’t very competent, and tend to muck about and screw things up, then try to hide it from everyone else.

That Was Too Easy » « Hacking AI Classifiers