It is sad to see the massacre and debacle going on in Egypt. I was one of those who wholeheartedly supported the Egyptian revolution in 2011. I eagerly joined many well wishers for a solidarity rally at the Trafalgar square in London to show support for the Egyptians who were revolting against the tyranny of Mubarak. I even made a video of the rally.

I believe in the conscious, collective power of a determined people to demand for progress in their society and make a change. I also understand that this collective power can be misused in a way that could lead to retrogression. 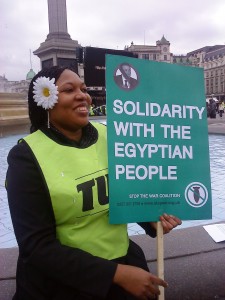 One of the highlights of the 2011 Egypt revolution that many chose to celebrate was the part where Christian protesters acted as body shields for their fellow Muslim protesters to allow the Muslims protesters say their daily prayers at the protest ground. Many laud this as a true sign of unity and religious tolerance. Yes, it was a nice gesture but, I was not so impressed.  Not that I did not like that they did it, but to me, it was a glimpse of problems to come. Of course the revolution was a mass action, a life defining protest, they were in it together for better or for worse and they had a common enemy, so it was in all their interest to protect one another. Although I can understand why so many saw this gesture as an icon of religious tolerance but I just did not think it was all that.

For me, I was more concerned about the mixing of religion with revolution. I would respect a revolution where people did not have to take breaks to offer prayers to a Skydaddy. I would love to be part of a revolution where we all take collective responsibility for the success or failure of the revolution without offering prayers of assistance or sacrifices to a Skydaddy. A revolution consisting of a highly religious number of people who takes breaks to pray would to me, signal a problem that would most likely arise in future. A problem of religious delusion, that could cause the deluded to infringe on human, political and civil rights of those who don’t obey the instructions of their religion. If you were ok to take breaks during a revolution to offer prayers to a skydaddy, there is a high likelihood that you might be ok in future to take the other commandments of the skydady seriously, including the commandment that women should not be heard in public, that adulterous women should be publicly stoned, that honour killings are OK and that gays should be beheaded.  I will be weary of going into alliances with such people but then, what choice does one really have when it is a spontaneous mass revolution?

In that case, it would be great to have a road map and  be prepared that the revolution for a progressive, democratic society does not stop with the success of a spontaneous mass revolution where majority takes time out to pray every now and then.

As much as I admire the courage of the Egyptians to take their fate in their own hands and demand a revolutionary change, I wonder why they did not go the whole hog to have a revolution manifesto or at least make one up during the revolution.  Was it just about ousting Mubarak and its cronies or was it  supposed to also be about paving the way for a democratic society? 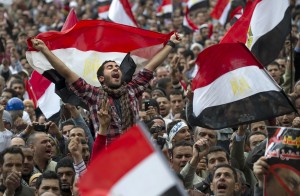 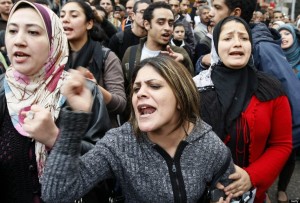 The Egyptians should know that they cannot eat their cake and have it. You wanted a democracy, you went to the polls and you voted in a president to serve for 4 years. You  cannot just turn around after a year  and say “You know what, we no longer want you, we will take to the street to depose you.”  This is not how democracy works.

Ousting Mubarak was your revolution and Morsi is your democratic mess. You just have to learn to live with it and manage it as best as possible until his constitutional term is up. Staging a ‘revolution’ to depose a constitutionally elected leader and inviting the military to take over is undemocratic to say the least.

African countries have had enough of military juntas and the woes they bring. One reason the continent is backward today is the incessant intrusion of military governments on its affairs. It is at least a good thing that the African Union immediately condemned the so called revolution to unseat an elected leader and the imposition of a military leader in Egypt.

Gone are the days when Africans take to the streets to celebrate military coups.  Awful experiences have shown times without number that coups do not bring Africans any good tidings. It seems Egypt did not get the memo. 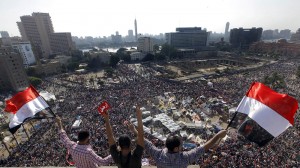 Now, the new military regime is massacring the opposition and anyone who crosses its part. The opposition, the Muslim Brotherhood, is also trying to claim back its party’s constitutional right to serve or rule as the case may be.

If it all started as peaceful sit-in-protests as claimed, the military was very wrong to violently disrupt peaceful protests, rendering so many injured and many dead.

I wonder why some Egyptians were surprised that the military acted so violently, what were they expecting, a democratic dialogue? When you invite in a military junta, what you get is military style governance, not a democrat inviting the opposition over for tea.  You really cannot eat your cake and have it.

Revolutions aren’t a dime a many, it takes massive effort to successfully pull one off, and it also claims lives. Revolution is never the first cause of action, in most cases, it is the last resort.

There are institutions within a democracy that the Egyptians could have used to bring their elected leader and his Muslim Brotherhood political party to order or at least curb their unwarranted enthusiasm.

The workers could have strengthened their trade unions as a means of political control and dialogue.  Trade unions could have been an avenue to bargain, negotiate, protect and protest workers rights which invariably include issues like employment rights, civil rights, women’s rights and sexual minority rights. Also organizing within trade unions are a veritable way to fight against government corruption.

Human rights groups and civil societies should have grown stronger after the successful revolution. Youth networks, women’s networks and other social groups should have joined forces to network and map out a democratic manifesto for the c 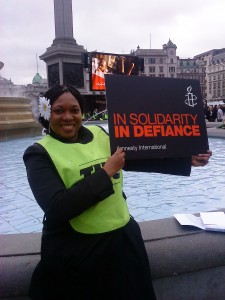 ountry that takes into cognizance, all stakeholders. The adopted programs could have been pushed via the ballot boxes.

Rather than develop all the sociopolitical structures that a democracy provides, Egypt chose to rely only on the last resort, mass revolution, as the answer to all problems. It is not, it never will be.

Too many interests are at stake. We can be united to fight against a common enemy, but once that enemy is gone, we will have other enemies within ourselves to combat , therefore we can never be so united as to always only have just one enemy. Taking to the street every time to eliminate our enemies would only lead to chaos and anarchy, because in most cases, we are our own enemies and the enemies are us.

It is indeed sad and I hope that the Egyptians get their acts together and salvage the situation before it escalates into another horrible nightmare. I do hope Egypt gets out of this devastating mess, enough of the bloodshed on this planet!

Order your sizzling copy of Freedom To Love For ALL: Homosexuality Is Not Un-African! » « The many faces of Jesus