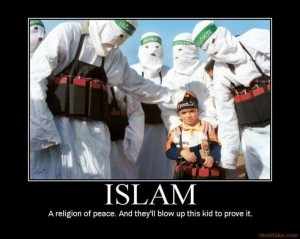 Killing in the name of God is unfortunately as old as the first time Man created God in his own image. Boko Haram, the Islamic terrorist group against western education in Nigeria struck again early this morning. According to reports: 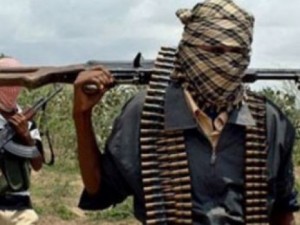 Armed Islamic militants have killed 29 students and an English teacher in an attack on a boarding school in Yobe State in northeastern Nigeria.

Survivors being treated for burns and gunshot wounds said some students were burned alive in the attack, which allegedly took place early Saturday and which is believed to have been carried out by the radical Boko Haram Islamic group.

Gunmen stormed the premises of Government Secondary School in the town of Mamudo in Yobe State at around 3am, setting fire to parts of the complex.

Dozens of children from the 1,200-student school escaped into the bush and have not been seen since, reports Sky News 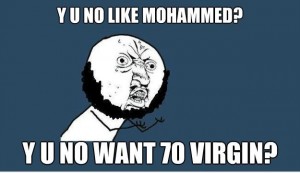 It is said that those who make you believe absurdities can make you commit atrocities. These horrible people are living testimony to this fact.  Pigs that are for no just reason, much loathed in their various Holy books, are definitely better than those cold blooded murderers; after all pigs don’t kill for any imaginary Sky daddy.

BTW, people who want to stone LGBTs to death in the name of their God are no better than these Boko Haram terrorists.

Recently I was told by some Nigerians that I am worse than Boko Haram because of my sexual orientation and advocacy for LGBT Rights, which i blogged about here. 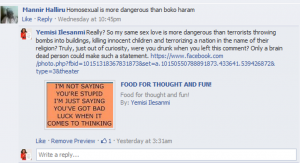 To the homophobes who actually scream that LGBTs are worse than Boko Haram, well, just hope you don’t get a visit from the Boko Haram members soon.

Yemisi ur own case ir more dan boko haram btter hang ur self b4 pple living in nija no were u r staying. 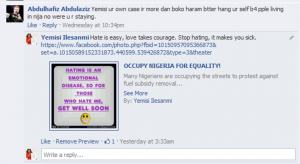 LGBTs brings to you colourful Rainbow; Boko Haram members strike you with bullets. You are still free to pitch your tent with your fellow murderous terrorists.

When next you decry those who murder innocent people in the name of their God, don’t forget to include yourself in that category. No matter what your fevered, homophobic brain thinks, whether you or your sky daddy likes it or not, LGBTs are still human beings.

You might consider yourself a warrior for God, but that is actually another name for terrorist for God. You are all murderous, hate-filled human beings who bring darkness to this universe in the name of your imaginary skydaddy.  Your hate and religion poisons our planet, go meet your skydaddy now.

BTW, there are no virgins waiting for you, in fact there won’t be any YOU when you blow yourself up and NO, you don’t get a brand new, big dick, ignoramus! 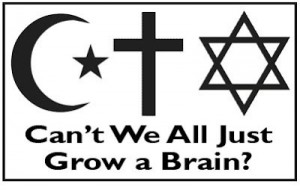 The Living Dead » « Stop telling black women what to do with their hair or skin!