The domain name is suspicious, but it’s a plausible site – so, how are we supposed to tell if that’s really the Florida department of education, or just some very subtle trolling?

It goes back to 2004 and looks department of education-ish, but if I were trolling the stupid, I don’t see any reason why I wouldn’t have started under Jeb Bush’s reign instead of recently. I’m not really interested in doing a full forensic work-up on the state government of Florida’s internets, so let’s assume that this is real. Or, real-ish. I can also imagine some angry librarian in Florida who decided to throw a sledgehammer in the gears by suggesting this. Or, maybe the internal security of the site is terrible and the password, “MAGA2016!” is the credential for full administrative purposes.

What I’m getting at is that I’m really reluctant to believe that anyone, even Florida republicans, is this stupid. Because my remaining theory is that some MAGAhead saw “1619” and thought that ‘CRT’ is a math problem.

Tallahassee, Fla., April 15, 2022 – Today, Commissioner of Education Richard Corcoran approved Florida’s initial adoption list for mathematics instructional materials properly aligned to Florida’s Benchmarks for Excellent Student Thinking (B.E.S.T.) Standards. The approved list followed a thorough review of submissions at the Department, which found 41 percent of the submitted textbooks were impermissible with either Florida’s new standards or contained prohibited topics – the most in Florida’s history. Reasons for rejecting textbooks included references to Critical Race Theory (CRT), inclusions of Common Core, and the unsolicited addition of Social Emotional Learning (SEL) in mathematics. The highest number of books rejected were for grade levels K-5, where an alarming 71 percent were not appropriately aligned with Florida standards or included prohibited topics and unsolicited strategies. Despite rejecting 41 percent of materials submitted, every core mathematics course and grade is covered with at least one textbook.

Overall, Florida is initially not including 54 of the 132 (41 percent) submitted textbooks on the state’s adopted list. The full breakdown is below:

Let me add some emphasis:

An “alarming 71 percent” of MATH texts are tainted with philosophical concepts that hurt white people’s feelings? I have to admit this does make me want to produce a Maoist math book, or perhaps a Stalinist math book, except then I’d have to deal with all the logistics of shipping tens of thousands of copies of “Uncle Zee Teaches Numbers” to Texas. “The Gulag Yoga-Free Sports Medicine Program” might be hit, too, especially if the illustrations are good. “We will follow our comrades, Ivan and Ivanka, as they work out the bodily stress they suffered sitting at their desk-jobs being exploited by capitalists.” Urrr, or the 1619 version, which is really not funny at all and portrays imperialists as evil, exploitive, monsters, without mentioning at all that they were white.

“It seems that some publishers attempted to slap a coat of paint on an old house built on the foundation of Common Core, and indoctrinating concepts like race essentialism, especially, bizarrely, for elementary school students,” said Governor Ron DeSantis. “I’m grateful that Commissioner Corcoran and his team at the Department have conducted such a thorough vetting of these textbooks to ensure they comply with the law.” 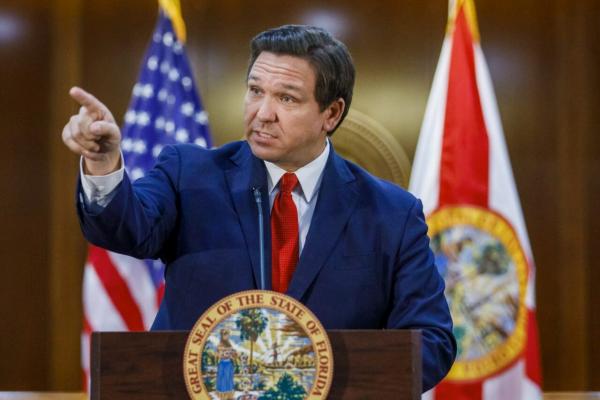 Entirely missing from this discussion are examples of how a mathematics text can be “indoctrinating concepts like race essentialism, especially, bizarrely, for elementary school students” – the whole damn thing is bizarre, governor DeSantis, especially the part where were are expected to believe that there are republicans in Florida who were capable of reading 132 children’s textbooks.

“We’re going to ensure that Florida has the highest-quality instructional materials aligned to our nationally-recognized standards,” said Commissioner of Education Richard Corcoran. “Florida has become a national leader in education under the vision and leadership of Governor DeSantis. When it comes to education, other states continue to follow Florida’s lead as we continue to reinforce parents’ rights by focusing on providing their children with a world-class education without the fear of indoctrination or exposure to dangerous and divisive concepts in our classrooms.”

Surely white supremacy is a dangerous and divisive concept. But, it’s embedded in the school materials by default and not explicitly. I.e.: little kiddo is presented with books that show white people doing all manner of stupid shit, like a sort of historical edition of Jackass and conclude, “there’s something wrong with them.” Again, it would depend on the art, to really get it across; I’m thinking American History for Kids should license art work from Matt Groening and show Homer Simpson helping with the first Thanksgiving and then grabbing his musket and coming back to slaughter the natives he had just sat down to dinner with. It’s not “revisionism” if it’s historical facts. The white supremacists who “ethnically cleansed” the east coast of the US of natives sure had some dangerous and divisive concepts.

It seems that some republicans attempted to slap a coat of paint on an old house built on the foundation of white supremacy, and indoctrinating concepts like race essentialism, especially, bizarrely, for elementary school students.

Florida appears to have set itself up for a Resource Consumption attack (RCA), specifically a Disambiguation Cost Attack. [cyberinsurgency] Someone could find the input funnel of the parental complaint system and start complaining about pretty much anything credible that an AI could output complaints about. For example, what if I trained up a flat-earther AI, or an anti-vaxxer AI and started it pumping out dangerous and divisive concepts like that “unvaccinated people are stupid” – hook it to a semantic analysis network and automatically complain about any textbook that contains the number 3 (because its an approximation of pi) – it’s the cloud-based robo-dittohead. But imagine the fun if the FLDOE got hundreds of complaints about every single textbook that they have submitted? Now, how do you figure that out? [I know: the point is not that any republican actually looked or read a book but if you can trap them into a conspiracy to manipulate the process, then flip that over to QAnon and tell them it’s a bunch of pedophiles trying to “groom” all of the real math out of education.]

Democrats are Stupid Too » « It Always Comes Out, Eventually