I’ve been busy running around building forms for casting the liner for the forge body, and dealing with a bunch of other stuff, including stressing out about my first colonoscopy, which is tuesday morning.

After finally getting SIOP off my chest, I made a bad decision: I’ve been listening to Blood In The Water – which I will, eventually, review somewhat. But it’s so depressing I feel like I’d be more comfortable lying on the floor and refusing to move. So, one must struggle to find cause for optimism and one must have a better reason to get out of bed than “I have to pee.”

My friend Mike G started asking me about rolling pins and whether I had some suggestions for a rolling pin. I started researching various forms of the right woods, and it turns out that the prices for craft woods have been skyrocketing lately. Eventually I found a cool angle: baseball bat blanks. They’re still expensive but they come pre-rounded, so you can avoid the nasty step where you turn a square piece of wood into a round one with a chisel. The bat blanks are delightful: cut the ends so the chuck can grab them, chuck them up, grab a chisel, and go! I found a place online [bellforest] that offers bat blanks in exotic woods.

Mike had been talking about a longer than usual French-style rolling pin and I thought it’d be fun to try to make something so simple that had to be symmetrical. It’s not exactly easy to make simple curves. 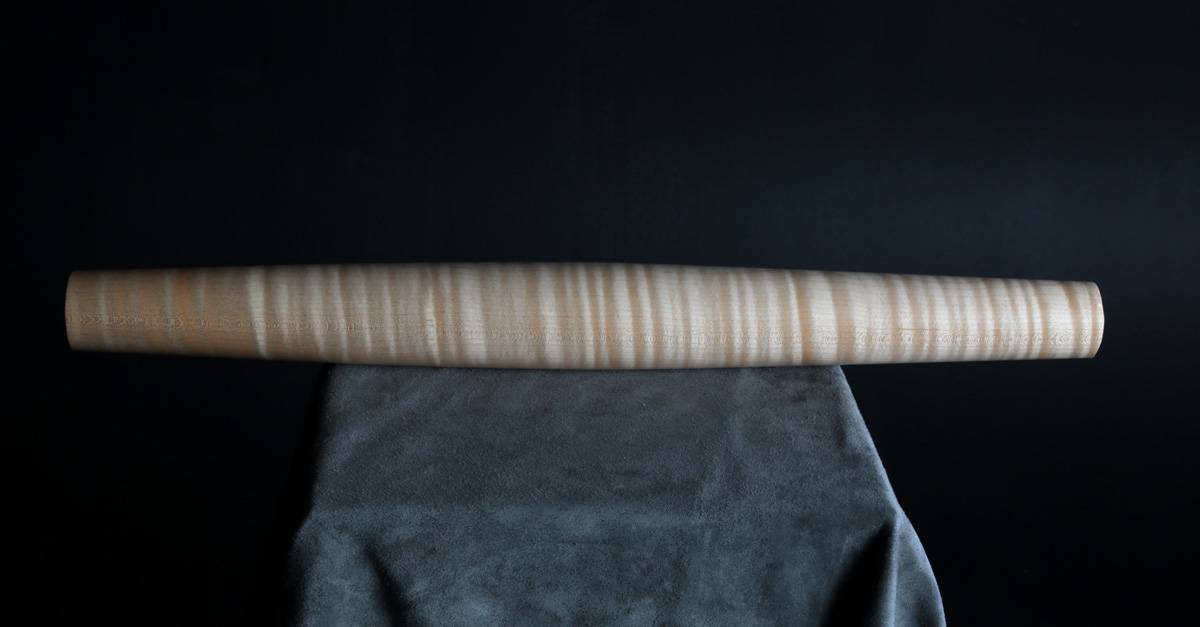 Curly maple is wonderful stuff. It’s as tough as wood gets, and it’s beautiful and comparatively affordable. All you need to finish it is a couple of passes with linseed oil. Getting those curves right took about an hour and a half. I confess, I was lazy – I believe the official proper way to make something like that is to cut a template with the ideal curve cut into it, that you can place on the wood to ensure that it’s symmetrical. I thought, “knife maker!” and just started cutting.

Then, I made a little pizza dough roller/pie roller with the left-over piece. 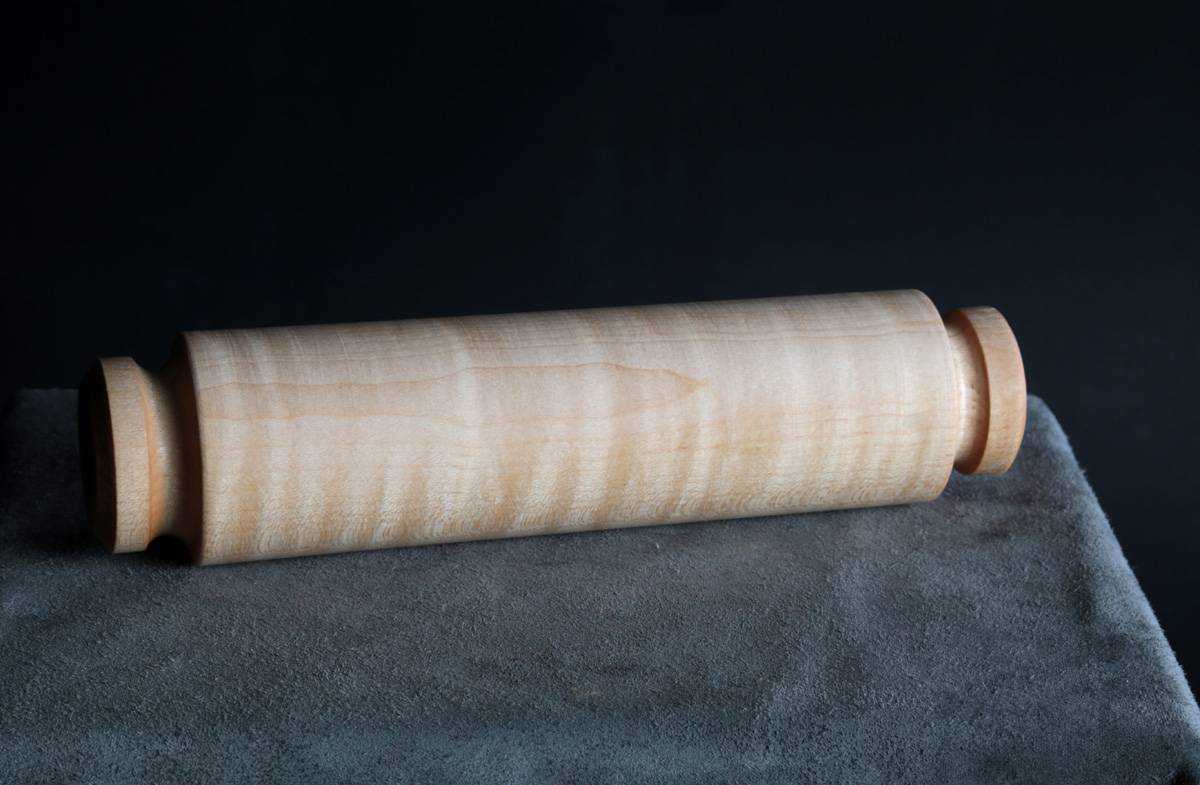 I like the handle design but I understand if you don’t. Most of my pizzas were rolled out using a wine bottle, to be completely honest. The nice thing about that approach is that it requires a pre-emptied bottle.

The rolling pins are “unloved art” and I’ll probably seek a home for them. I haven’t been doing auctions for FTB lately but I suppose I could put them on the block.

Then this last item is one of those patience necessary projects. And I nearly screwed it up because I was impatient. Normally what you are supposed to do is glue the wood to the bottom of your form (a plastic bucket) using some resin, and then once it’s cured to it’s going to stay there, you overpour the rest of the batch, and vacuum infuse/degas the whole thing.

The bucket-within-a-bucket design was an attempt to minimize the amount of material I’d have to remove from the interior in order to shape the bowl. Seemed like a good idea except I forgot that the chuck/lathe need something to attach to, inside where the bowl opening will be. I had to drill holes and put screws in to hold a chuck ring, and things got nasty when one of the screws snapped off when I removed them; I had to take a drill bit and vise grips and perform a surgical extraction. Next time I’m going to just say “fuck this” and pour resin. It’s not cheap but I wasted a half an hour farting around with the mounting. 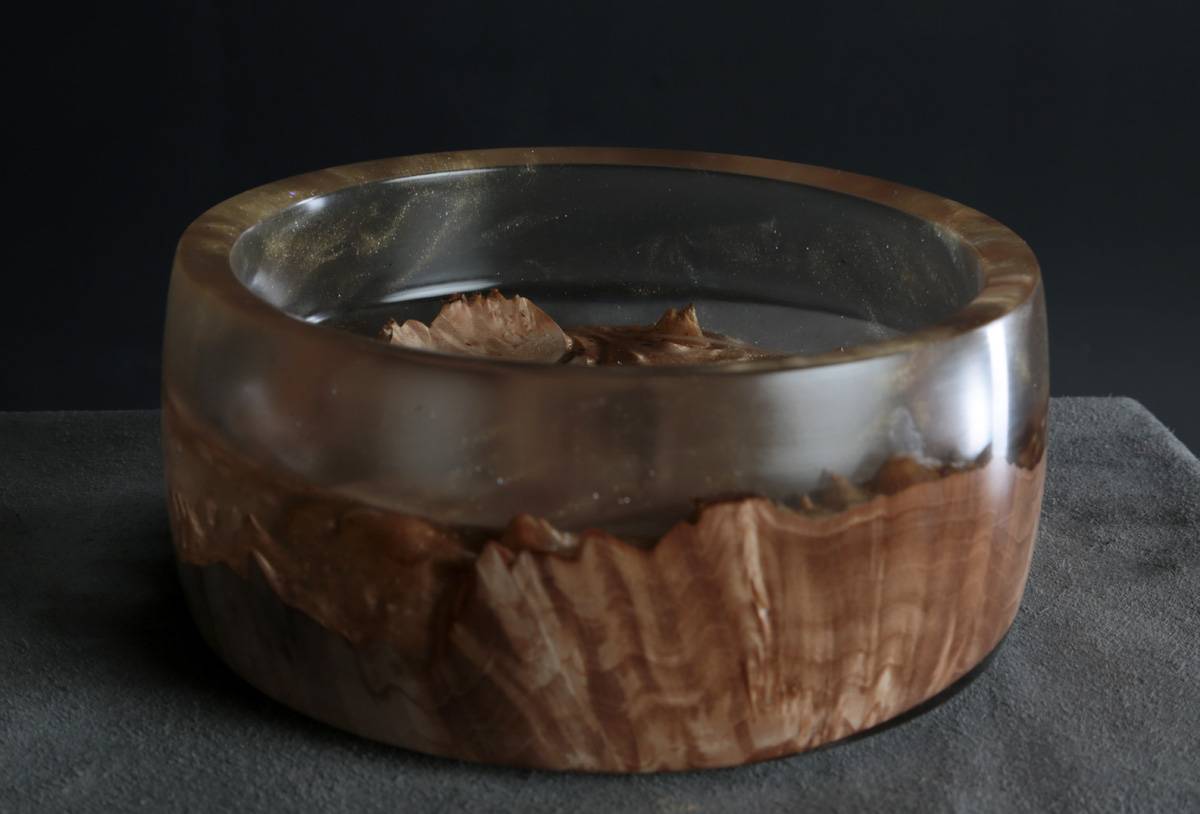 It’s hard to represent these things photographically, because the whole game is the details of the weird “landscape” created in the burl. There’s a refractive line where I cut the interior – part of what you have to do with this stuff is cut until you think it’s going to look right; the bottom of this piece is fairly thick but it seemed like the right thing. 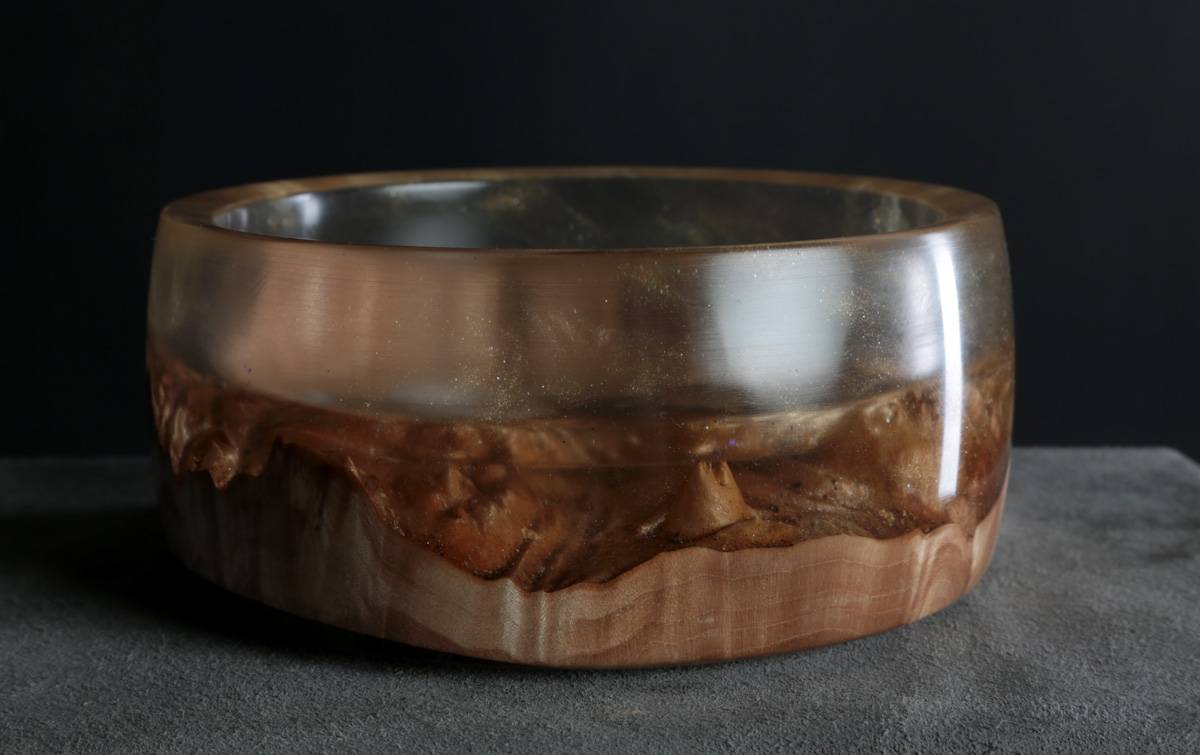 I used a metallic gold flake, and I was pleased by the way the flake fell like a sort of golden snow all over the peaks of the burl. I like how it turned out and I will be doing more of these. I’m still puzzling over the question of how to simplify the process. In the meantime it makes me happy to grind expensive pieces of wood and resin into chips.

This is a piece I made for someone who has been pestering me for a bowl, so it’s spoken for.