It would appear that Tucker Carlson’s surprise “trout fishing vacation” happened when he learned about the new lawsuit against Fox, in which he appears as a member of the supporting cast.

I admit, I haven’t watched much of Carlson, ever, but, when I have, it’s always triggered a fountain of philosophical speculation, e.g.: “how can someone who interrupts other people so much be concerned with free speech?” This is a guy who tries to completely dominate every discussion that he is in, and he hasn’t realized that talking over top of someone is a form of “de-platforming”? 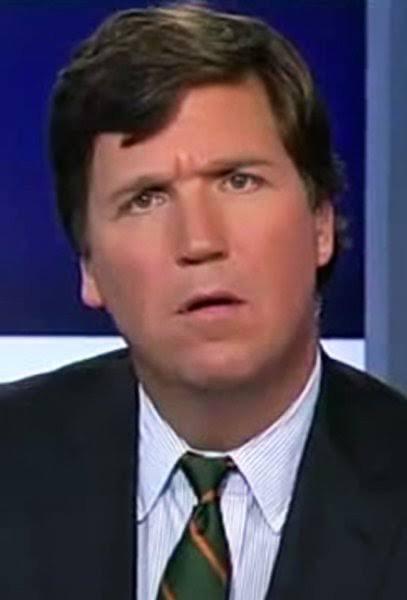 Why did they photoshop my eyes closer together?

The prurient details of the lawsuit are mostly regarding another Fox host, Ed Henry, who got out the door with his millions and reputation intact. Or, who thought he did. [ap] Carlson’s role in the lawsuit appears to be as a douchebro who participated in retaliating against a co-worker who was being sexually harassed in a particularly disgusting way. Fox’ boys club senior talent appear to be getting their Harvey Weinstein on, bigly. But – retaliating – isn’t that perilously close to “cancel culture” in the workplace? You know: a co-worker’s freedom of speech is not being respected because when they exercised their freedom of speech to say “I don’t want to have sex with you”, they were silenced and hounded out of the organization.

That’s a stretch, I know, but it’s not much more of a stretch than is being made by the various “anti-PC” pundits (formerly known as: stale comedians) who want to complain that bad sexualized humor should be supported even if it’s tedious and un-funny. I doubt Carlson is going to trot out the “I was just kidding” defense, because he’s just way too busy tying those trout flies, don’t you know?

As I said, it’s a stretch, but it illustrates the problem political conservatives have when they try to wrap themselves in the banner of “free speech” – because the speech they are forced to defend is usually deplorable, sexist, racist, or stupid. It’s not a good look because it forces them to eventually have to answer questions like, “why did you support that?” Note that none of this has anything to do with “free speech” and everything to do with “speech has consequences” – i.e.: we respected you enough (even Tucker!) to listen carefully to what you had to say; then we concluded you’re a disgusting jerk who’s not worth listening to. Ricky Gervais take note: throwing ancient sexist tropes around doesn’t make you “edgy” it means you’re “lazy” and “you suck.”

Frankly, I am surprised that Carlson is still “a thing” after the devastating public hamstringing he invited when he was still the bowtie-wearing friendly face of sociopathy on Crossfire. In case you have never seen this, it’s already going down in history as one of the great moments in media criticism:

I don’t agree with Stewart’s cheap shot about Carlson wearing a bowtie at his age, but that’s probably because my father always wore a bowtie and it seems normal to me. Or, as normal as wrapping any kind of restrictive lead-rope around your own neck can be.

Shortly after Stewart unassed Carlson on his own show, Crossfire was canceled. Personally, I’ve always wondered why CNN did not suffer more negative impact for hosting such a rotten show. But, they eventually corrected the problem. Score: cancel culture 1, Carlson 0.

Carlson will probably survive this and will probably enjoy his well-timed “fishing trip” and Fox news will continue to exist; the performers will just have to a bit more careful with their public personas. Cancel me a river.

You Know What Else They Call Methane? » « How To Barricade