Bloomberg’s got a “young hipness” problem – namely that he is neither young nor hip.

I like the way that the media is reporting on this particular issue. It’s practically tongue-in-cheek, “Gee, Bloomberg’s marketing department came up with something that is cynical and stupid but also it would have been really edgy in 2016!” That sounds a whole lot better than “transparently dumb but expensive.” Of course, these are not mutually exclusive: it’s transparently dumb, expensive, cynical, and out of date.

Apparently, Bloomberg went and hired a marketing company that works to match “messages” to “influencers” and offers the influencers a whopping $150 or something like that to post something edgy yet annoyingly dumb about Bloomberg. [bi]

Jerry Media CEO Mick Purzycki is leading a collective of popular meme accounts called Meme 2020, which has coordinated the meme postings on a variety of meme accounts, The Times reported.

The memes paid for by the campaign feature screenshots of conversations with the Bloomberg campaign account, a parody of Bloomberg’s public persona.

While the Bloomberg memes are self-deprecating and an attempt at humor, one popular meme-account owner criticized Bloomberg and his campaign. Josh Ostrovsky, whose Instagram account @thefatjewish has 11 million followers, commented on one of the memes that he was also approached by the Bloomberg campaign to post but declined because of Bloomberg’s past positions and policies on stop and frisk and drug enforcement for marijuana possession.

A Bloomberg campaign aide told The New York Times that the campaign was trying to match President Donald Trump’s 2020 campaign strategy and that they were “trying to break the mold in how the Democratic Party works with marketing, communication and advertising, and do it in a way that’s extremely internet and social native.” 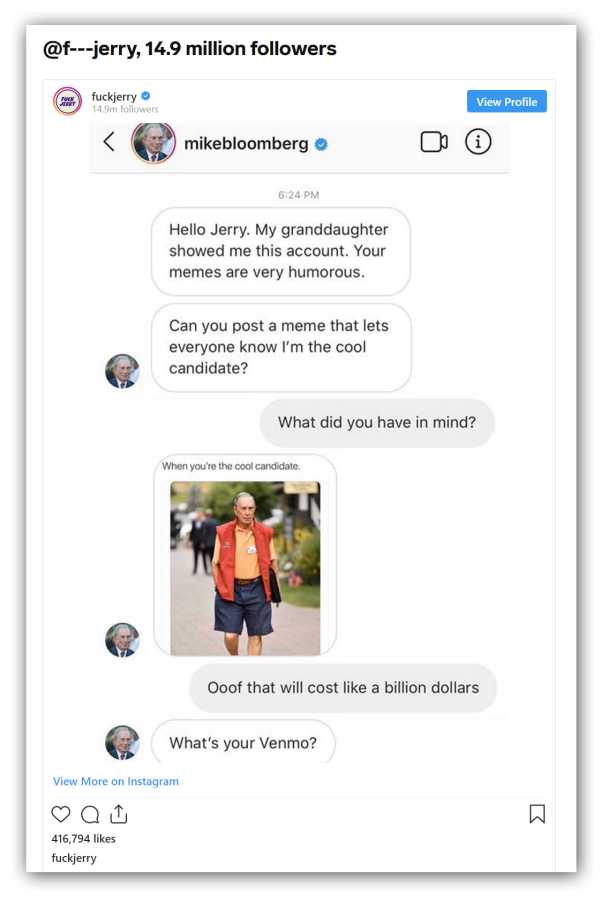 Jerry Media CEO Mick Purzycki is definitely an expert in weaponizing hip and cool; he was one of the organizers of the Fyre Festival – a gigantic flopapalooza of entitled rich assholes and instagram wannabes. [eonline]

Mick Purzycki The Jerry Media CEO took part on and off screen in the Netflix documentary, appearing on camera to explain his company’s part in the festival’s promotional strategy on social media.

“We were responsible for their social media designs and helping with marketing, pre-launch,” Purzycki, the son of the mayor of Wilmington, Delaware, explained to Town Square Delaware. “We were one of six New York marketing agencies working together. One of the agencies did a great job: the event sold out. Where the festival failed was on the island.”

I’m baffled by one thing, and one thing only. I am not baffled that it’s a failure and ought to be a resume-killer for Purzycki, who (to be fair) seems to be barely cut out to operate a lemonade stand. I’m baffled that E! Online thought it was a necessary part of Purzycki’s resume that they mentioned that he’s the Mayor of Wilmington’s son. Is that a qualification for being a sleazy internet marketing shithead? Is that the only qualification for being a sleazy internet marketing shithead? 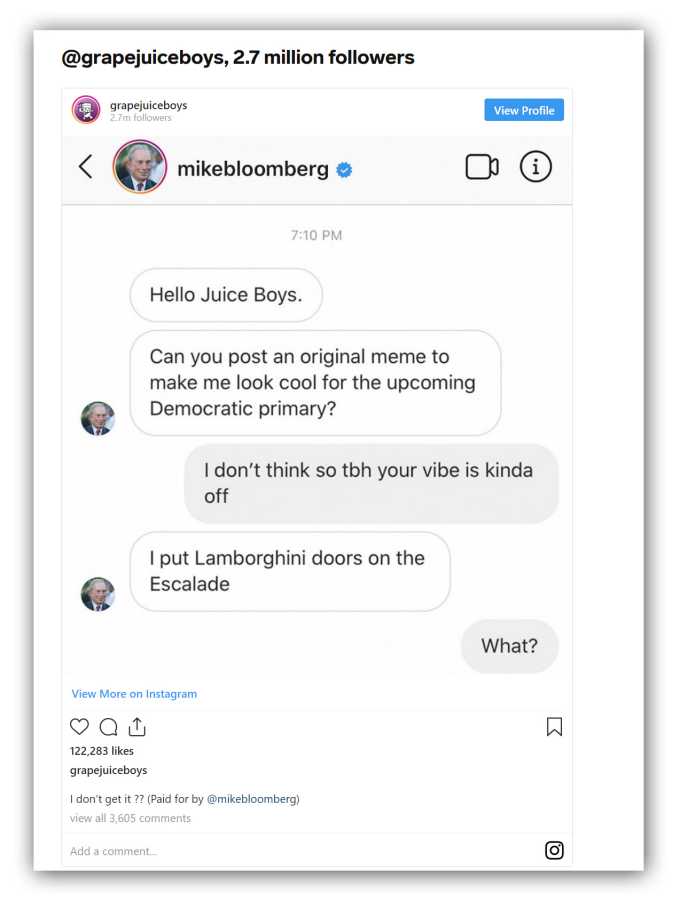 This is the problem with American elections and the gigantic, roiling, heaps of money that are collected by the various candidates: they spawn legions of sleazy internet marketing shitheads. Fortunately, the shitheads then “trickle down” the money to BMW dealerships and sushi bars, and circulate the money into the shithead economy where eventually it winds up in Jeff Bezos’ in-bucket. The whole instagram influencer economy is just a great circle-jerk of sleazy internet marketing shitheads, short-term stars grasping for their 7.5 minutes of fame (fame reduced due to fame inflation) and fly-by-night companies trying to cash in on junk. That is the stuff of which political campaigns are made, nowadays – thank you Edward Bernays, I hope you’re burning in hell next to someone particularly smelly.

I’d wish Bloomberg would spend himself broke, but he’s got so much money that he can’t. The only way to waste as much money as Bloomberg has is to build F-35s.

If you don’t recall Bill Hicks’ rather crude but prescient piece about marketing, it applies to these guys.

By the way, if anyone here is in advertising or marketing: kill yourself.

At one point Hicks goes into a feigned melt-down over “that’s really good, they’re going for the anti-marketing dollar, that’s a good market!” That’s where we are now: Bloomberg is going for the anti-cool market anti-youth market because he got rolled by some sleazy internet marketing shitheads who told him, “sure, this is great! It’s how Trump beat your Hillary in 2016!”

Here’s what’s so crazy about the whole thing: Bloomberg appears to think that Bernie and Elizabeth Warren (and perhaps Joe Biden) are young and hip and cool. The whole fucking democratic ticket is a geriatric parade; they aren’t hip and cool – they belong in a nice quiet pasture.*

I’m queueing this up for a couple days from now. Perhaps by the time you’re reading this, Bloomberg’s campaign will have already gone full Fyre Festival. We can only hope. It’d be a great note for Bloomberg to end his nasty life on: a spectacular failure like a great streak of seagull shit splattered on top of his “philanthropic” legacy.

* Except Mayor Pete. That guy’s a vacuous corporate non-entity; he’s like what you get if you turn “cool” inside out.

Prediction: Bloomberg’s campaign is going to end with a whiny, entitled, republican, rage-quit.