Back in 2002, I wrote (regarding the US government’s cybersecurity efforts), “adding money to a disaster doesn’t necessarily help get it done, most of the time you just wind up with bigger, more expensive disasters.”

That’s probably too broad a generalization for today’s purpose. But, if you specify procurement disasters, then I think it still holds. The key, which government seems to consistently ignore, is that you have to change the way you did things that caused the disaster, otherwise you’ll pursue the same path and wind up in the same place. “Failure to learn anything” ought to be a federal crime, but then who’d jail the jailers?

Today I’m going to briefly touch on a few disasters-in-progress. I could probably promote each one into a separate posting, but a) I don’t need to ‘pad’ this blog b) perhaps we will find enlightenment by looking across this landscape of woe instead of zooming into the nooks and crannies. So, we have three items – an unholy trinity:

Congress’ regulation of the purse-strings has gone completely out the window under Trump. I’m not sure if the democrats even have a viable option for fighting it, but what I’m afraid of is that they’ll discover that they can do it, too, and then the budget becomes a complete mess, with billions of dollars being allocated for bombers actually getting spent on low-income housing, or something. Just kidding. 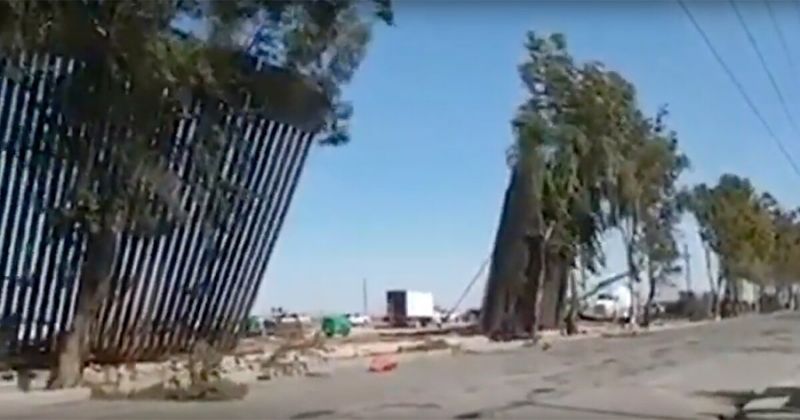 to be fair, the concrete was drying

You’ve probably already heard about the section of Trump’s beautiful wall that blew over due to high winds, and landed in Mexico. [yahoo] It would have been funny if the Mexicans had quickly cut it up and hauled it off to recycle it for scrap. In spite of paying for it, I guess they didn’t. But the really funny news is that the pentagon, which has (basically) infinite amounts of un-traceable dark money, has agreed to divert some fragrant grease from over-funded programs into wall-building. Basically, that’s the government stealing from itself, but under Trump such things are not shocking, they’re redolent of swamp-possibility.

The program they have taken some of the money from is: F-35 and VF-22 Osprey procurement. [popm]

I still think they should build a “stealth” wall. Maybe this is their chance.

This was inevitable, given the amount of money at stake, which means that at a certain size it will become impossible to award a contract unless all of the bidders merge like Lockheed-Martin-Sikorsky-GeneralDynamics-Northrup-Grumman are doing; then they can sole-source the contract. [politico]

The Pentagon must stop work on its major cloud computing contract that Microsoft won last year, a court ruled on Thursday in a major win for former bidder Amazon.

Amazon, which asked for the delay, argues it lost the Joint Enterprise Defense Infrastructure, or JEDI, contract to Microsoft because of President Donald Trump’s remarks disparaging the company and its founder, Jeff Bezos.

There is so much money at stake that there would be lawsuits alleging other procurement improprieties, regardless of who won and why. But the important part of the whole thing is that now “getting it through litigation and settling all the lawsuits” is a gating factor in getting a project done. For something like a cloud computing project, that’s particularly egregious since both Amazon and Microsoft have their own vendor lock-in strategies, so it’s not practical to implement a solution on one then switch to the other – that would require a complete re-write.

So, why not tread water for a couple years while the lawyers argue? That’s going to work wonders for getting projects on track and moving toward successful implementation. Since they have baked in guaranteed failure, they ought to cancel the whole thing and spend the money on the wall.

It was only a matter of time before the F-35’s stealth was defeated and it becomes vulnerable to defensive fire. Once that has happened, the aircraft will be unusable except against defenseless targets like Medcins Sans Frontieres hospitals. Who am I kidding? The entire premise of the US Air Force is that it likes to attack defenseless targets from high altitude, and watch explosions on television screens.

The F-22 raptor had serious difficulties with clouds; clouds being made of water and water causing its stealth coating to crumble and peel until the plane resembled a hotel bathroom with a shitty caulking-job. The brits discovered that F-35s are a great big sucking vacuum cleaner of … birds.

There are a number of things about this, mostly that “foreign object damage” is a big problem, especially in combat zones. The premise of jump jets is that they can take off and land in unexpected places – so long as those unexpected places are carefully cleaned, fireproof runways. It’s not an excess of caution that they stopped the flight and thoroughly checked the plane out – since the F-35 only has one engine, its failure mode during VTOL flight is to experience a hard bump. 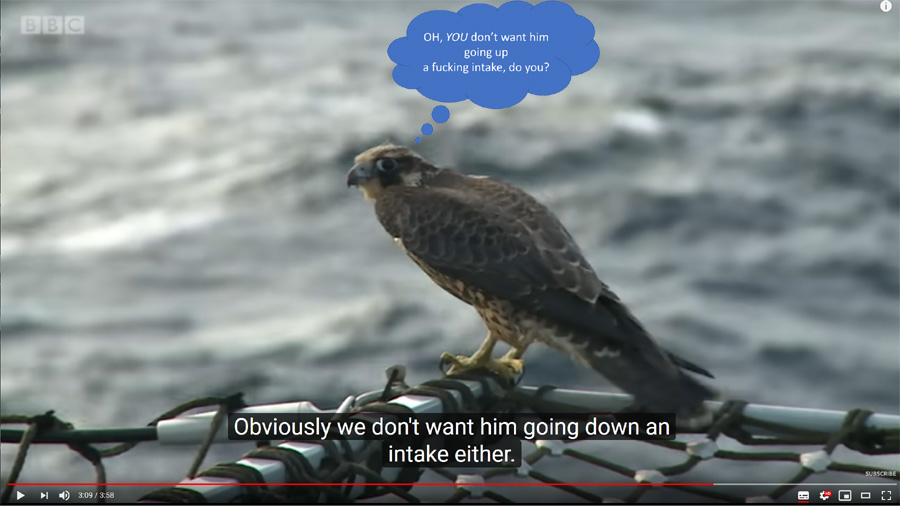 The solution to a bird going down the intake is to send a crewman down the intake to check on the intake. Of course, everything that’s not air, which goes up the intake, becomes one more chance for the engine to chew itself to pieces. 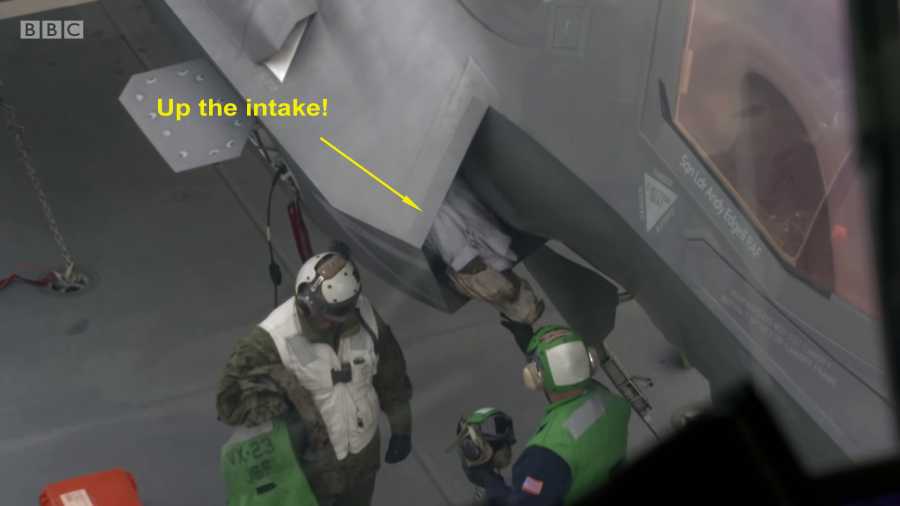 No YOU go up it!! Check for birds!

What still puzzles the moderately intelligent reader is: since the Royal Navy has given up on having aircraft carriers, why didn’t they buy some perfectly functional helicopters? At least those can autorotate when the engines cut out.

There’s something sweet about the Brits being so stupid that they have a bird mascot on an aircraft carrier. Why not have a useful mascot, like a bucket of ball bearings? ${Something something Brexit joke}

Theatrical Gender as a Performance » « Stick a Fork in Bloomberg