Olaf S started texting me asking me to make him a knife (my usual answer to such a request is: “no”) but part of what he asked intrigued me enough to do a test. He wanted “a very long cooking knife” and I was interested in experimenting with temper-lines in W-2 steel. I’ve seen some very pretty temper-lines pulled out of that mono-steel, so I thought maybe it’d be interesting if I made something with a long edge and played around. So, this happened: 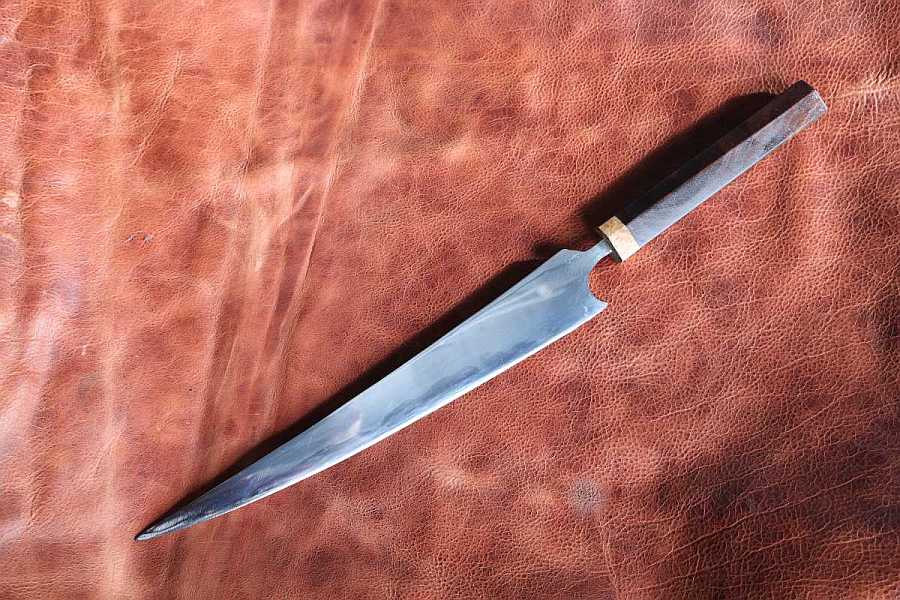 The total length of the blade is about 12″ (300mm) and the handle is another 6″ (150mm) it’s thin, strong, and it cuts quite well. The handle is maple burl and claro walnut. The shape of the bottom of the blade, with that big cut-out, just sort of happened – OK, let me tell the truth: I wanted to see how a die grinder cuts W-2. You can see the temper line clearly; my experiment worked well, there.

Here’s what happens when you start working on temper-lines: you can’t see them until the blade is nearly mirror polished. Since the blade is flat-ground and mirror polished, you’re looking at a tremendous amount of work. I used the whole piece as an experiment – I wanted to see if I could do a big flat surface that didn’t have pockets and ridges when I tried to mirror-finish it. It came out pretty well, so that was satisfactory. Then, I experimented using polycrystalline synthetic diamond as a polish. I made a little polypropylene carrier for a piece of oak-tanned leather which I soaked in WD40 and sprinkled a bit of the synthetic diamond on. Then, I worked it thoroughly work a while, listening to some nice music. The results were spectacular – polycrystalline diamond is particularly useful as a polishing medium because it fractures under pressure, producing finer polish as you polish more and more. And, diamond is hard enough that it chews up even tempered high carbon steel. I estimate that the polish started out as 3000 grit (where my sandpaper leaves off) and ended up around 12,000 grit. I probably won’t use polycrystalline diamond often because it’s fairly expensive – $30 for a few grams – though this took about as much powder as fit on the tip of a knife. A little goes a long way. I hope it’s not toxic or carcinogenic; that’s why I made sure that there was WD-40 all over the leather: keep it stuck down so it doesn’t float into the air.

This knife did not go to Olaf. I had another test-piece that I finished up and sent to him – something a bit more conventional: 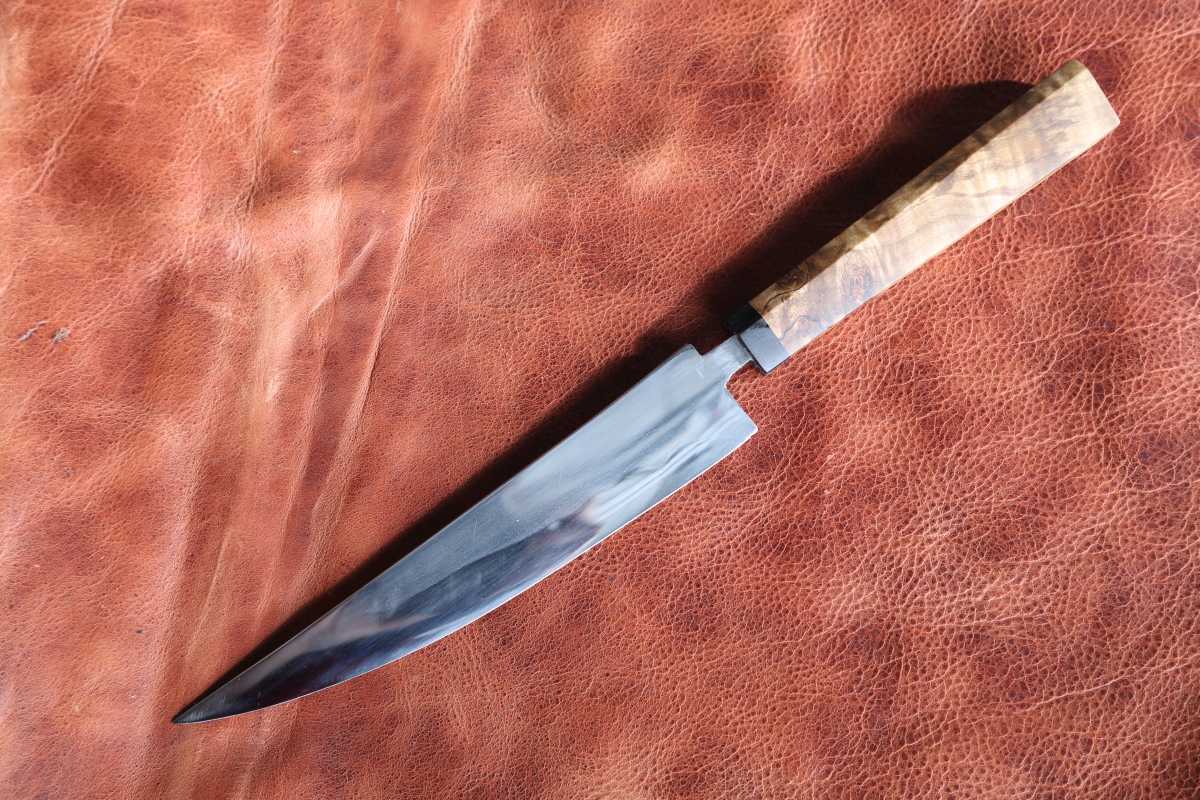 That’s another blade of W-2, another hamon, more mirror polish. I am now tired of mirror polishing things for a while. It looks sharp, doesn’t it? It sure is!

The cook’s saber is pretty extreme. I intend to experiment with making some kind of a sword-stand for it, and then I will try to find a home for it. It needs to go to someone who cooks really big chunks of meat, or ginormous cabbages or something. Or perhaps it belongs on a mantle-piece. Should I auction it for FTB?

Notes on product photography: The second knife gave me a choice of either emphasizing the temper-line, or the wood of the handle, but not both. A professional would have taken two photos, slightly offset, and copy/pasted/brushed the detail from the blown out area on the handle into the image where the temper-line in the blade came out right. Or, an old-school pro would have spent time positioning a “gobo” between the light and the hot-spot on the handle. A “gobo” stands for “go between object” – it’s a thing, usually black-painted, that is positioned so as to block or diffuse light on a specific spot. When you’re looking at really good product photography, it used to be that you’d be seeing tons of gobos, but now it’s photoshop adjustment levels.

Olaf sent me a picture of the kind of knife he wanted: it looked like a big Henckels’ chef’s knife. So, he wanted a fancy damascus knife that would probably not be as good as the German mono-steel machine-perfect CNC-made blade? Basically, hours of my life producing something that is already good. So, I replied: “You want something like that, only not ugly?” I got a lot of sputtering in reply. But, seriously, if you like a Henckel’s why would you ask someone to make you another one? So I thought I’d play around with a larger more extreme version of my chef’s pwning knife designs.

The Kurds (Again) » « Sunday Sermon: China, If You Are Listening…