Trips to Tom L.’s are always interesting. If you recall 2 years ago, at the last TomCon, we did an evening trip to Yerkes Observatory, after stuffing ourselves with a massive amount of deep-dish pizza. [stderr]

This year Tom arranged a tour at Fermilab. That was pretty darned cool! Even though the LHC is bigger, the Tevatron at Fermilab is still a really impressive piece of work. In fact I felt kind of bad for the Fermilab folks because they all had to keep saying “now the LHC is bigger…” I wish they had a different patter, perhaps a list of all the amazing things they discovered there. 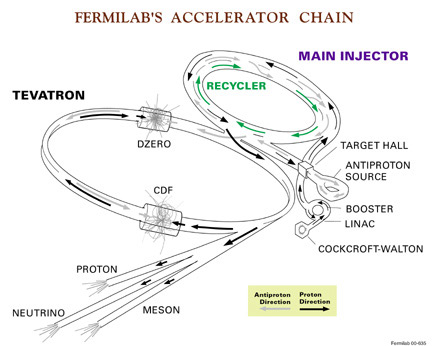 It’s interesting to tour it, because most of it is underground and most of it looks the same. There’s a head unit that injects hydrogen atoms that get ripped to bits and sped up to nearly the speed of light. In the course of getting ripped to bits the various byproducts are filtered out and redirected so that what’s left is a neutrino beam. The kindly fellow who was showing us around answered questions – he was getting peppered constantly by a pack of 12 very nerdy people who were extremely curious about everything.

One of the cool parts that I particularly liked is that they are helping people who are building neutrino detectors – they just figure out the right angle and send the neutrinos on their way. For example, they were sending neutrinos to Minnesota, so they just fired at an 11-degree course down into the Earth, which doesn’t slow or stop the neutrinos at all. Obviously, neutrinos are hard to modulate or we’d have neutrino-beam long haul internet and cutting oceanic fiberoptic bundles would be a non-thing. 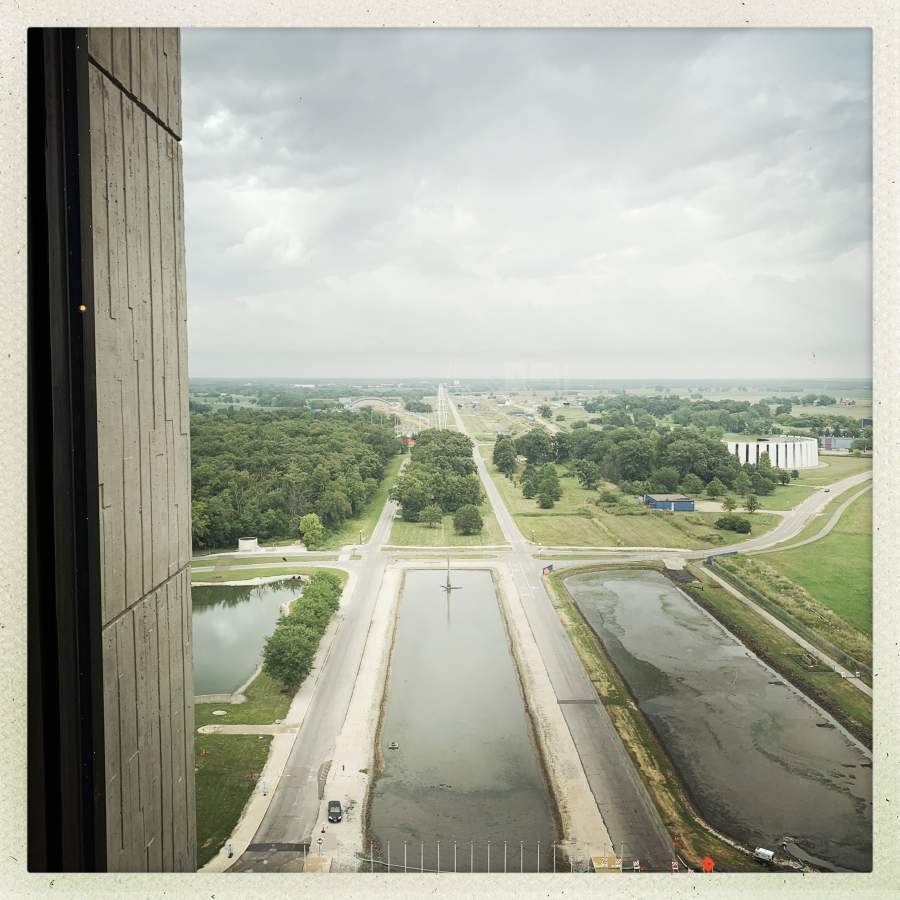 The first director of Fermilab was a metal artist and designed a gargantuan entry gate, as well as sculptures such as this one in the fountain. He had a sense of the unusual, too – he made a 12′ mobius strip out of the stainless steel sliding covers from floppy disks. 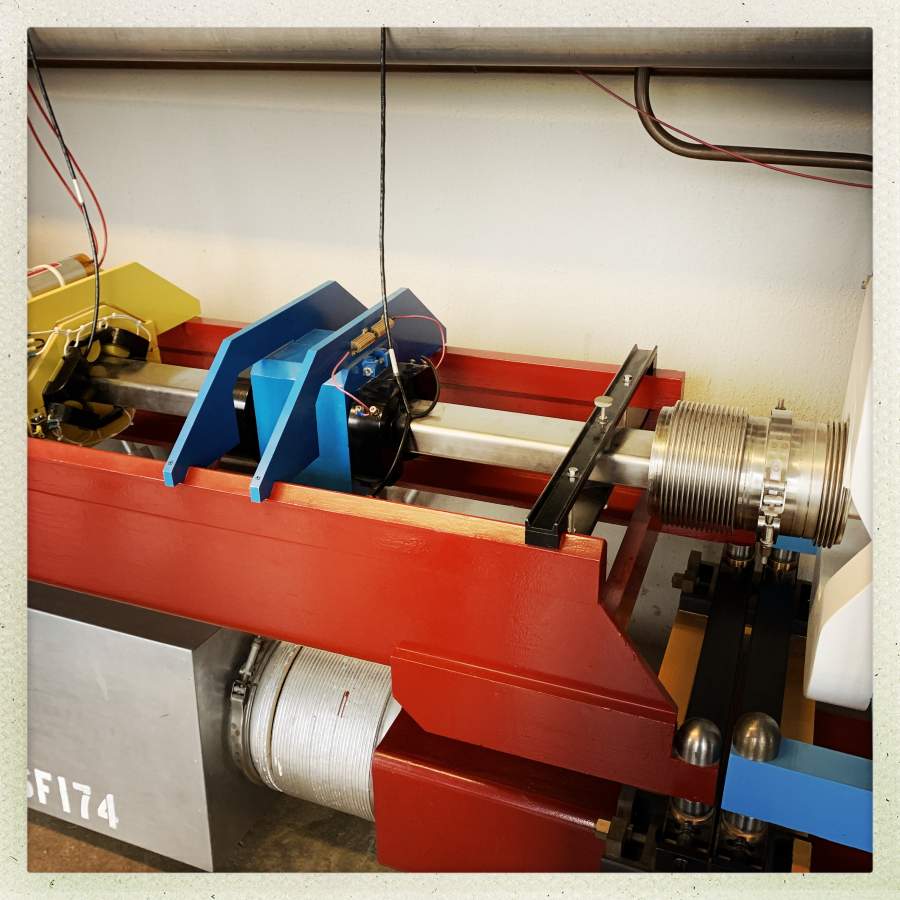 I was curious where they get their liquid helium. They brew it onsite using laser cryogenics. The system uses superconductors, so the lines are chilled to a few degrees above absolute (K) zero. It’s all pretty impressive stuff but it doesn’t do anything we perceive while we’re looking at it. It doesn’t hum or glow or anything. I guess a neutrino beam is not really a “death beam” either since it’d go through you and your armor and, because at that scale you’re just a very sparse cloud of matter, you’d probably never interact with the beam at all. 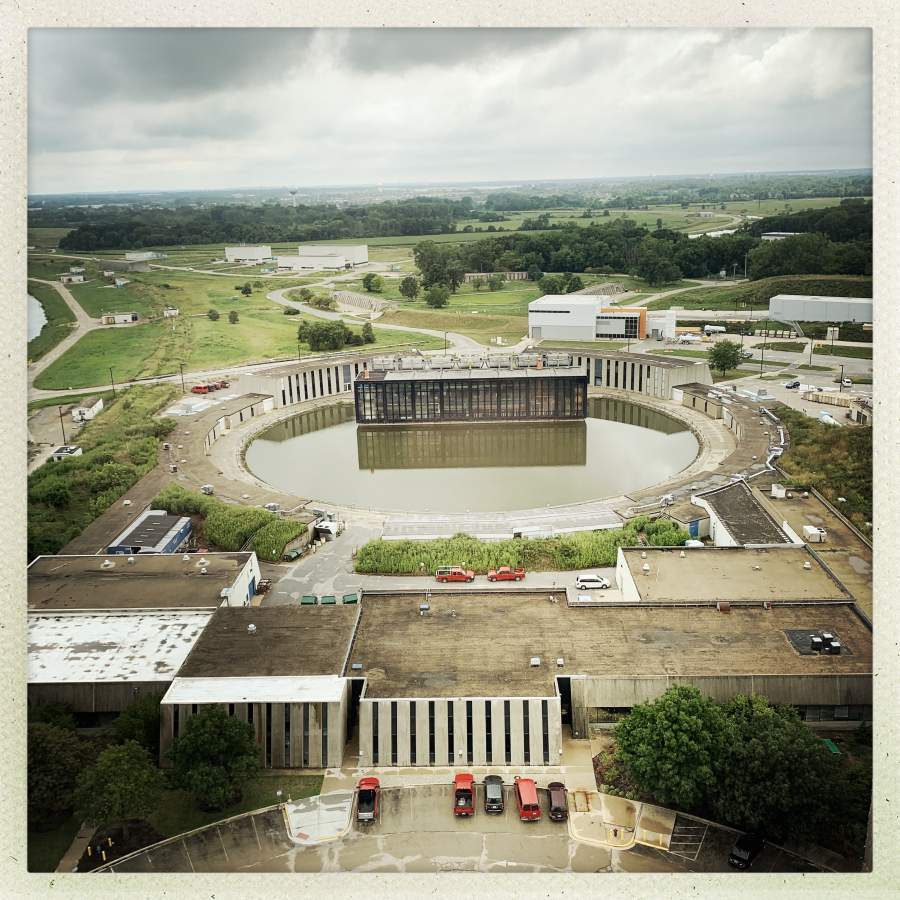 The injector end of the system is in the building in front of the ring. The building in the center is air conditioning and water cooling. 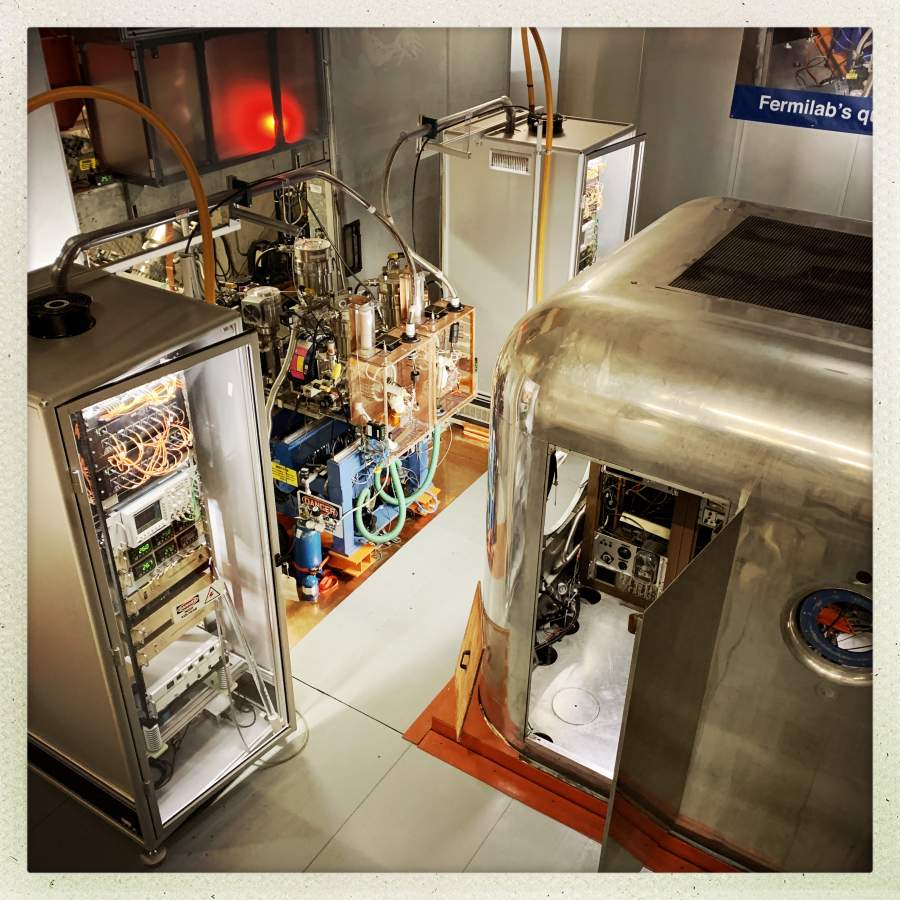 That is the injector end of the loop (the blue thing on the left). I felt that there should be a big stainless steel hopper labeled “Protons” but I believe that they are actually provided from that little blue tank connected on the left of the blue thing. It doesn’t take much.

They had a big cut-away model of the superconductor loop, and it wasn’t too impressive until the fellow explained that the two large copper pipes labeled “electricity” are “wires” – those are what carries the current. Fermilab uses so much electricity that they shut down in August because the local power grid needs the juice to run air conditioners, and they don’t have to work as hard to keep the superconductors cold. 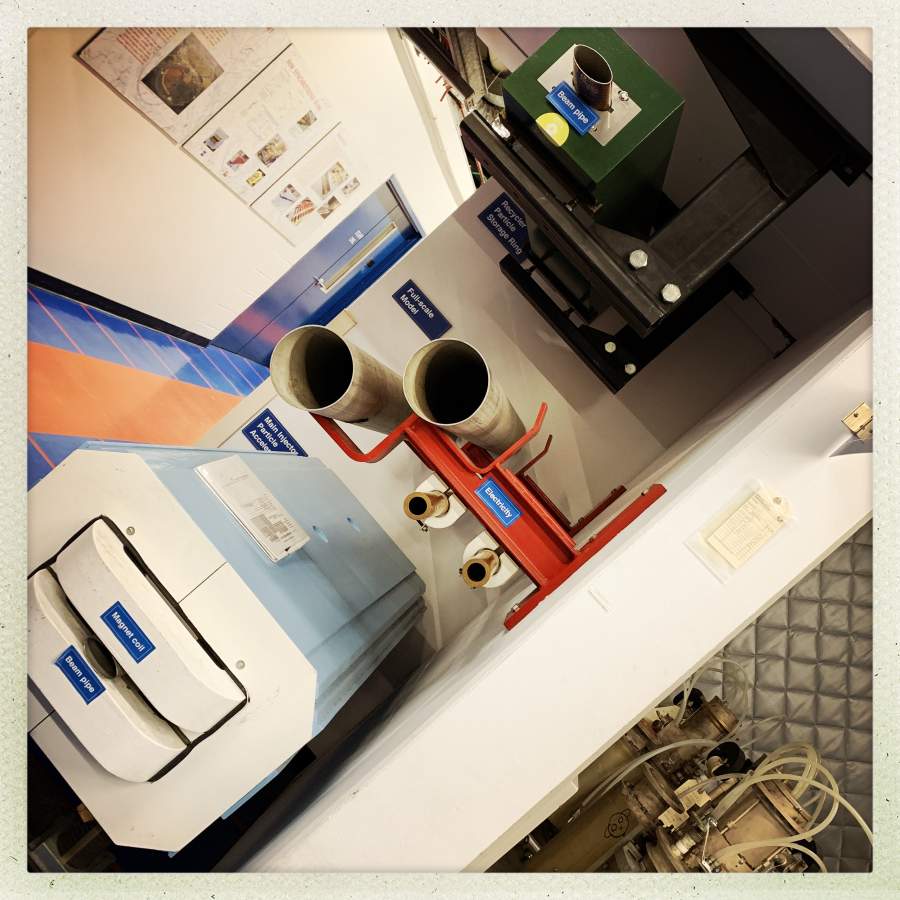 Huge amounts of space are devoted to power management and keeping electrical things cool. That makes a great deal of sense. It must be weird to be doing all this magical stuff that you can’t see doing anything (except shooting beams of neutrinos through the planet). 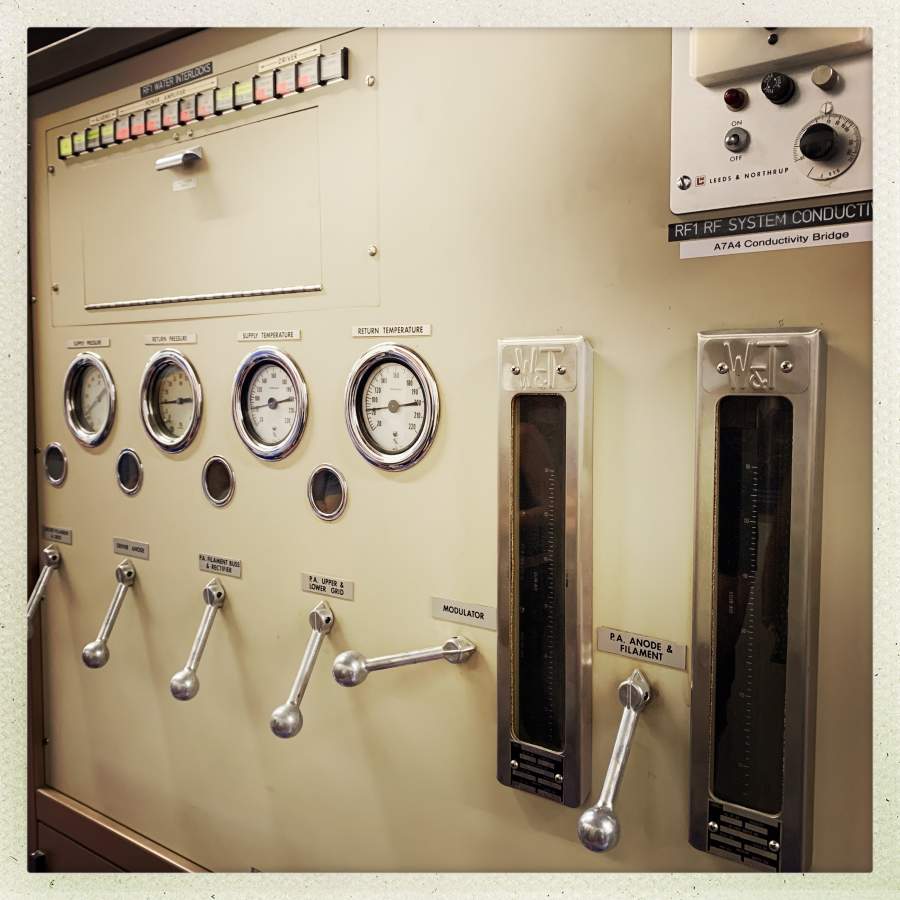 Some of the systems look like they are right out of the 1950s, in terms of industrial aesthetics. This power distribution wossname made me squee with delight. Screw back-lit LCDs! Give me cast aluminum machinists’ levers and analog dials!

One of the things that really interested me was a muon detector that was built by some gradeschoolers. It didn’t look like much, really – it was just two flat plates about 10″x10″ some framework and a small computer. I immediately started asking the docent how unpredictable the muon rate in an area was, and what the muon-rate looked like. It looks to me like muon counters would be a good place from which to sample cryptographic randomness. Since you are detecting muons that hit a spot, it would be impossible for someone who was trying to get into your RNG to sample them, too. Of course, they’d just break into the endpoint software on the controller that was measuring the samples. (sigh)

We had a good time.

The group was 90% computer security people and one blacksmith. When they walked us through the control room, there was a small spontaneous cheer. The docent asked what that was about and Tom, as our spokes-leader, said, “there are no post-it notes with passwords stuck to any of these consoles.” As soon as we walked into the room, everyone’s head was swivelling.

Augmented Reality » « On My “Method”