One of the other attendees of Tomcon was ‘Q’, who is currently working at an undisclosed media company, doing undisclosed stuff. I had brought my gaming computer and HTC Vive VR headset because, if you haven’t seen Google Maps VR you really should, if you can.

Q brought a Magic Leap goggle set. Maybe you have heard of them; they got a lot of bad press because they did not live up to the world’s high expectations of them – mostly it seems to me because those expectations were unrealistic to begin with. It’s still first generation stuff. You can see pixels and the field of view is not as big as we’d probably wish it to be. 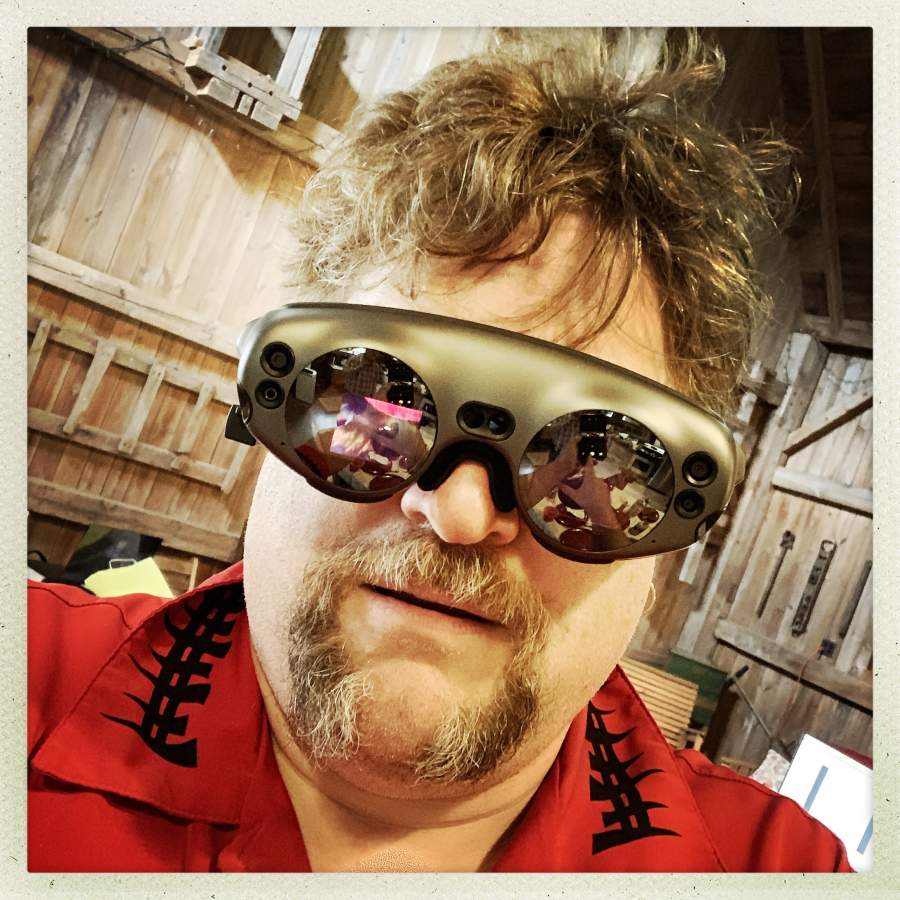 On the other hand, it’s cool. And it has some incredible potential to change gaming so long as humans don’t wipe themselves out, first.

The goggles are a clear surface that embeds lighted color OLED screens. So, you can see the room you’re in, clearly, but also you can see what the computer puts in your visual space. The computer can play with depth cues, and it’s also fed information from the sensors at either side of your eyes (mini LIDAR!) that act as mappers for the things around you as well as providing depth measurement. So the computer “knows” where everything in the room is, if you are looking that direction, and it builds a map of the room based on your line-of-sight.

The demo I was playing with was extremely simple but you can see the potential from miles away. Let me describe how it worked: you have the goggles on and you see: the room you’re in. You also see a little two-decker propeller plane that’s sort of cartoonish. The controller responds to your hand gestures, so you pull the trigger and the plane goes PuuuUTTTTPUTPUTPUTPUTPUT and flies off. There are pretty good quality speakers embedded in the temples of the headset, so you hear the plane but nobody else does. Then, you fly the plane around with your hand. After a while I could do things like fly it in circles around the computer on the table, or do immelman turns with it climbing toward the ceiling. 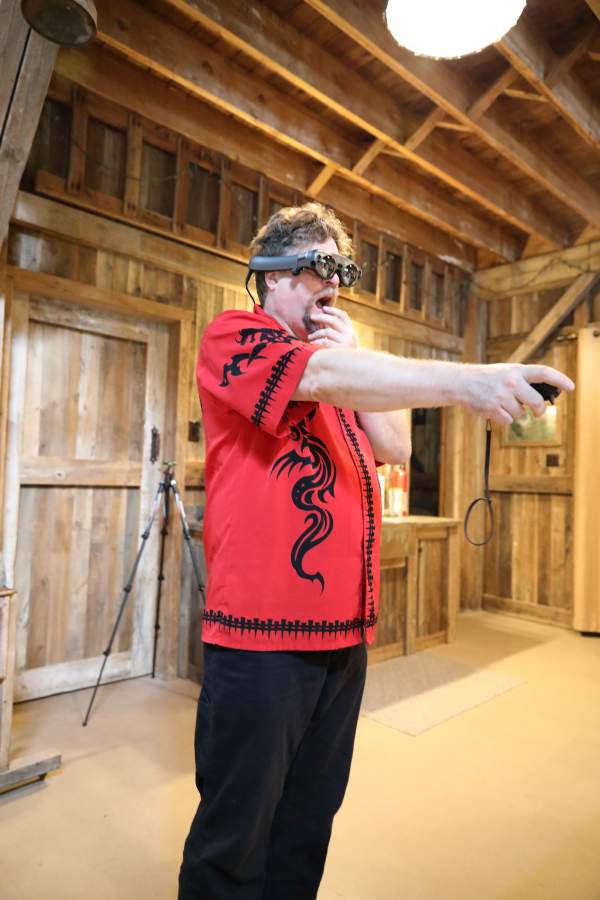 The part that blew me away was when I flew the plane into the back of Ron Dilley’s head and the plane exploded. Naturally, Ron felt nothing. But it was amazing: the in-game virtual object was interacting somewhat with real objects.

There’s another game where you’re shooting at robot ninjas and the robots will duck behind furniture and whatnot. It’s pretty pewpewpew-iful.

We had a pretty fun session just gassing about what kind of games could be made, and invented a category we called “massively cooperative games” – the idea being that everyone in a certain region is working to do something. I.e.: “the floor is lava” and people have a variety of bricks, blimps, boards, ropes, whatever, and try to assemble them to build a system whereby everyone can escape; essentially a “build your own platformer level.” I was just holding out for a sandtable for gaming: everyone can stare at an empty table and see terrain features, armies of drag-and-drop orcs or napoleonic cavalry, or maybe both, all doing their thing. Right now the technology is limited but the next version of this sort of stuff is going to be great. I feel a little bad for Magic Leap because there are going to be plenty of smart engineers going “we can do that better” and some of them will.

The current state of affairs for augmented reality is that there is a shortage of great applications and there are multiple competing standard APIs for making it work. Naturally Google did their own thing, as did everyone else. So if you want to write code, it’s going to be locked to one device or another for the next couple years. That being said, now is a good time to get in quick with a great game or two. The development kits for this stuff are still pretty stiff, ($3000 for the Magic Leap) but there is an interesting effect with app-stores: the people who get in first and get good ratings on their stuff, tend to hang near the top of the rating scales if the rating scales take “all time score” into effect. If someone creates a good ‘flappy birds’-style hit game on one of these new platforms, they’re effectively going to get an annuity that’ll pay them hundreds of thousands of dollars a year for a decade or so. It’s a gamble I won’t be taking.

There are parts of the API that allow you to interpret hand gestures and use them for controls. So I thought a simple game in which you sit on the couch and flying toasters flap back and forth while you point at them and say “pew! pew!” and they crash in flames and limp around bleeding… it’d be a sure hit. And we wonder why Americans are so violent: we surround ourselves with carnage. I’m not blaming gaming, by a long shot – it’s that we have a casually vicious popular culture in this country and it’s embedded in everything.

Unrelated: I love the distortions you can get when you do panorama mode close to something. The limo was crazy long (stupid long, actually, and very uncomfortable!) and it was fun to warp it. It was a good idea for us to go to Fermilab in one vehicle so people could nap, talk, and drink and if we got lost we’d all get lost together.