Yesterday we went out for dinner, then had a private tour of Yerkes Observatory, up in Williams Bay, WI. 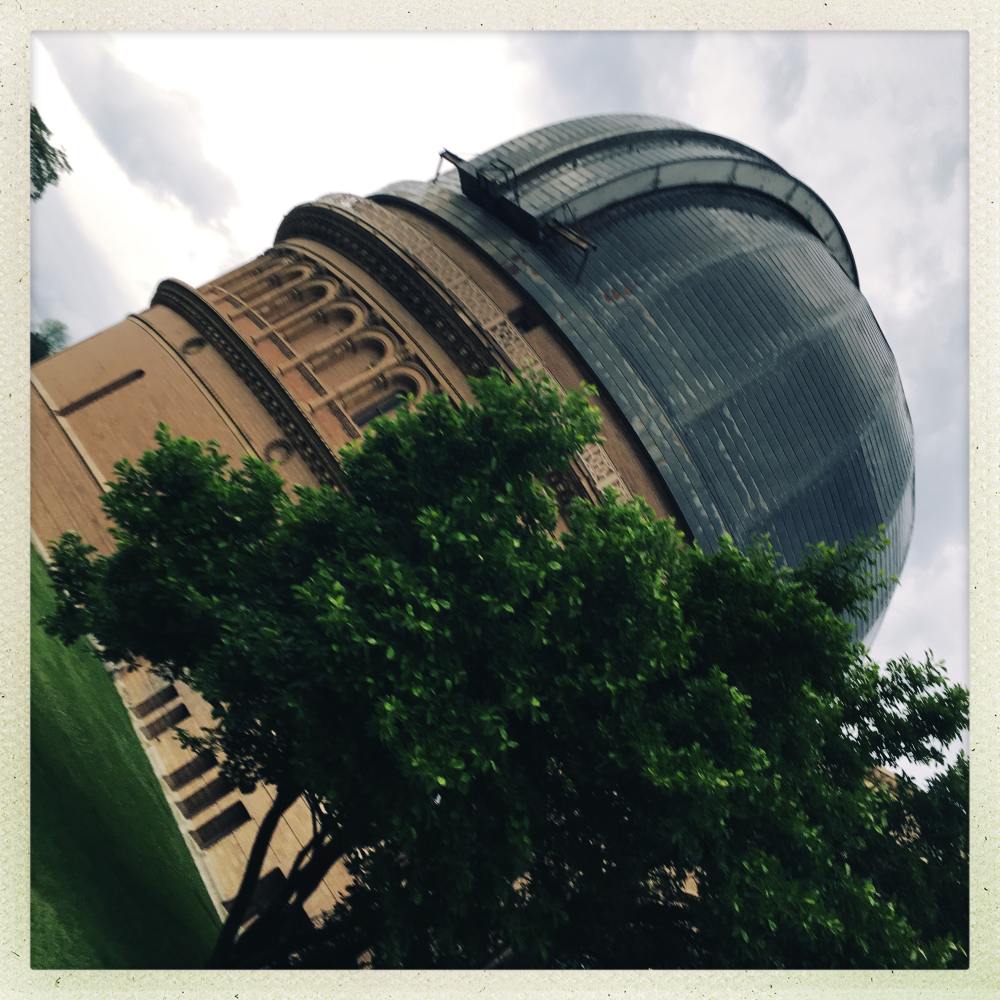 camera shake: it was getting dark!

What a gorgeous place!

The docent was great – he’d worked there for 20+ years and clearly loved the building and the equipment, and knew the answer to pretty much every question we threw at him (which is a feat: not even congresspeople can throw questions as fast and furiously as a dozen hackers) 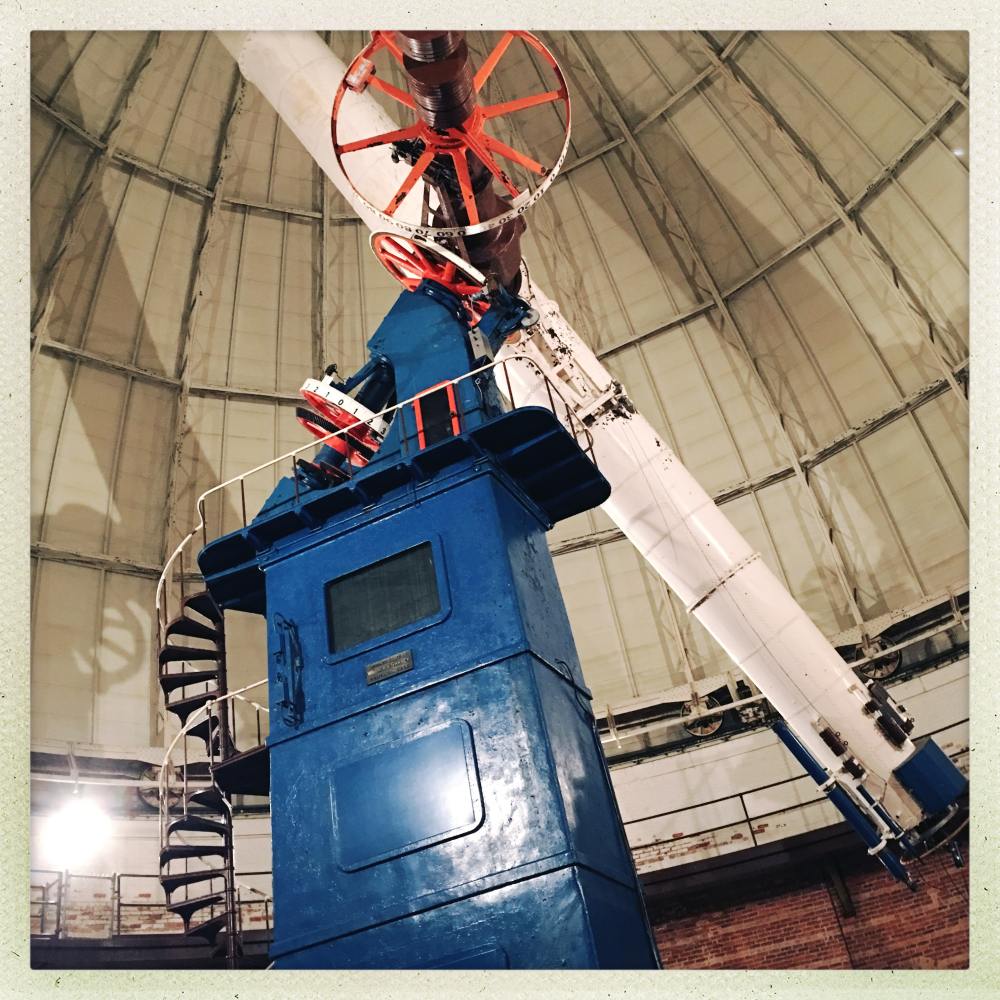 The scale of the observatory was awesome, and – since most of the group I was with were software developers/breakers of some form or another, working in a field that measures its past in decades – I get all mushy when I encounter machines that were built with such love, care, and thoughtfulness that they just work for hundreds of years. Standing on the huge floor-space as it smoothly went up and down, and nudging the great telescope and feeling it swing silkily on its balance, I felt like I have wasted all the energy I’ve spent building ephemera: most of the best code I ever wrote, and all the products I designed, they’ve all been out of production for years. But whoever wound the motors that drive the cables that move the floor did that in 1898 and (I asked) other than replacing the carbon brushes, it all pretty much just works. In my industry, giant companies spend vast fortunes building operating systems out of compressed shit that is so unreliable it needs constant tweaking and tuning.

The outside of the observatory is all terra-cotta: no leaking roofs, no leaks around window sills, practically no maintenance. In terms of “low maintenance roof” it’s not my favorite (the 1/2″ thick lead sheets that make up the roof of Notre Dame de Paris are my favorite)  but the whole place is a testament to “do it right and let it stand.” Apparently in 1898 one of the cables supporting the floor failed, and the 30-ton floor tilted so hard it bent in half. The telescope would have been damaged, except that a planned maintenance had it positioned horizontally – quite by accident – in the one position in which the edge of the floor that flipped up wouldn’t hit it. 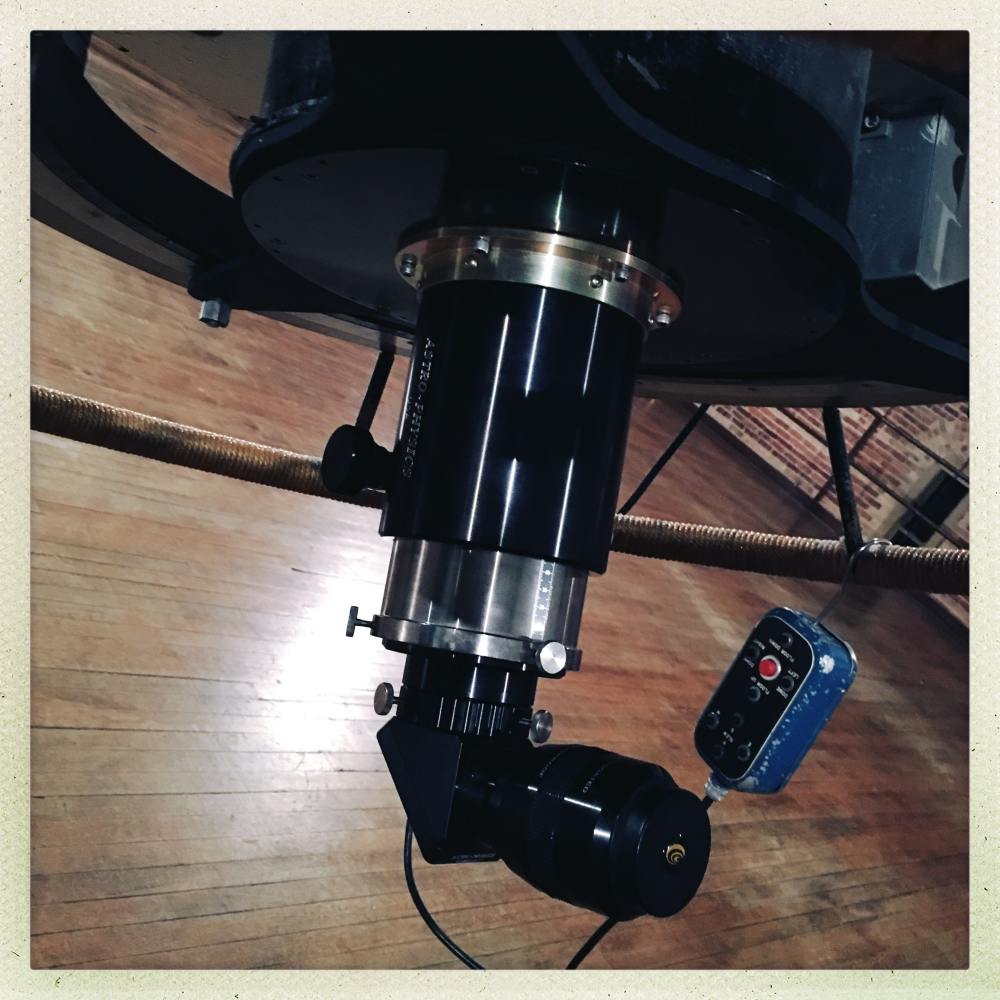 Unfortunately it was raining last noght, because apparently it would have been a great night to see Jupiter. Instead, we got to sit around and examine everything as thoroughly as it could be examined.

At one point the docent was talking about how amazing the field of view is, when looking at the moon through the telescope: the field of view is an area about 250 miles across, so it feels like you’re hovering over the surface. I said, half aloud, “that’s almost good enough that you could see where they allegedly ‘landed on the moon’….” and his eyes started to pop out in horror until the group dissolved in giggles and laughter. It was odd, later, when I found out that one of the group actually was ‘skeptical’ about the moon landings for what I’d say is probably the only reason I’d say wasn’t completely stupid: he figured that if the government said we landed on the moon, we probably didn’t and the money had just gone into someone’s pocket. Now, he’s grown up enough that he does believe we have a space program.

I drifted off thinking about how good it must feel to build something like that: technology that is only good, that doesn’t have the problem that it’s “dual use” or can be harnessed for oppression. Perhaps that’s why the building is so beautiful, the machinery so functional, the people so quietly proud – they know that they’re preserving something that’s unambiguously beautiful and valuable.

That’s one of the telescopes Hubble used while he was working on his thesis. Apparently Carl Sagan did, too.

There are a bunch of security people who I’ve known for ages; we meet at conferences all the time. But, since we’re the performers, we don’t ever have time to talk; we’re expected to mingle and teach and it’s tiring and usually we just sleep or hide. So, Tom Liston (author of La Brea tarpit, and a bunch of other cool tools, and a general all-around consulting wizard) decided to have “TomCon” – we all show up and hang out at Tom’s house and play show-and-tell about what we’ve been up to and there’s no schedule just food and space and cozy places. I hauled a bunch of studio gear hoping to go some video interviews for the column I write over at SearchSecurity, but we never got around to it. I did, however, take my Edgertronic high speed camera, which came in handu when Tom brought out the vortex cannon he had made from a 50-gal garbage can, filled it with smoke using a bug fogger with theatrical smoke juice, and started shooting 3-foot smoke rings at people. After a few tries we got a clip of a smoke ring hitting someone right in the face at 500fps. I also took a bottle of polyvinyl alcohol solution I’d brewed up, and we all had fistfuls of slime for juggling class.

I’m in a rest stop in Ohio, ought to make it home in another 5 hours.

Monday Meslier: 28 – To Adore God is To Adore A Fiction » « Businessmen Ignoring Entrepreneurs