When I worked at Digital, my boss, Fred A., and I attended a special briefing about new technology that was coming out.

That technology turned out to be the ground-breaking Alpha 2164 processor (which sank without a trace due to Digital’s incredibly bad go-to-market strategy). At one point in the meeting, the product manager said, rhetorically, “how stupid would that be?” with regards to pricing the processor too high. Fred replied seriously, “I don’t know. How stupid is there?” Implying that there is some kind of maximum stupid, or local carrying capacity for how stupid something can get.

I’m reminded of this by a bit of F-35 related news; the F-35 being one of America’s depth-gauges for stupidity, or corruption, or both. The F-35 is probably going to go down in history as the fighter jet (which it’s not) that ate the Air Force; probably the last new human-piloted combat aircraft. It may also go down in history as the aircraft that ate the Navy. Neither service needs to fling living meat into a cockpit to go fly out and deliver high explosive onto peasants, which is all the Air Force and Navy do these days, anyway. 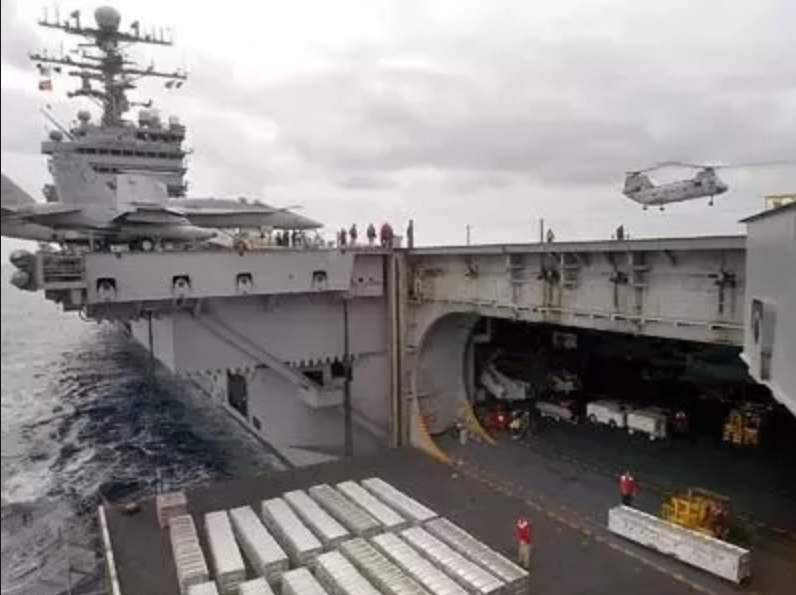 You’re probably already familiar with the Gerald Ford class aircraft carriers’ problem with launching catapults. [stderr] But it turns out that’s not the only problem: the Gerald Ford‘s inter-deck elevator system [the one in the picture is not the Gerald Ford] is also electronic, and also doesn’t work.

This is the end point of the principle of “buy it before it’s ready.” You wind up with stuff that doesn’t work that you paid a great deal for. You don’t need a doctorate in Applied Scamming to know what comes next: if you want it to actually work, you pay more. And more and more. [ni]

The Navy decided to omit the gear for the F-35 in order to keep Kennedy under the $11-billion cost cap that Congress has imposed on the ship’s construction. The sailing branch plans to christen Kennedy in late 2019 and add F-35-compatibility at a later date.

Remember, these are the yutzes who got an unasked-for $30 billion more tacked onto last years’ defense budget (Trump was already planning on diverting money for his stupid wall) and a $750 billion defense allotment in the new budget congress is busy carving up. $11 billion is too much, congress says, while they simultaneously fret over the 9/11 first responders’ health care fund which is a measly $1 billion.

Did you see how I tried to slip “omit the gear” by you? I know you’re eagle-eyed skeptics and you’ve been wondering “what gear”?

“All three of those causal factors – making the adjustments to the nuclear power plant that we noted during sea trials, fitting in all of the post-shakedown availability workload and finishing up the elevators – they’re all trending about the same time,” Geurts told the subcommittee.

I love military glarp-speak. It’s like a bunch of stupid people talking the way they imagine smart people talk. Let me translate that for you: the elevators don’t work. The $11 billion ship is limited to whatever aircraft it can park on the deck. After the on-deck complement has been launched, the carrier will have to resort to harsh language.

“Cost caps imposed by Congress on the Ford-class program to keep the price of these ships from escalating have accomplished the opposite effect,” a committee staff member told Werner, “with the Navy accepting delivery of unfinished carriers and intending to pay more money later on to add critical capabilities in the future.”

They paid for ships and planes that are both unfinished. If you ever find yourself in conversation with one of those “socially liberal, fiscally conservative” jokers, ask them how they square such obvious fraud with their endless support for “defense” [because the “socially liberal, fiscally conservative” types tend to be in favor of throwing money at the Department of Defense but not at poor people].

Meanwhile, the Royal Navy (Aka: “the first navy that has been eaten by the F-35”) has deployed basically its entire floating inventory to the Strait of Hormuz: a frigate and a destroyer. They don’t even have an aircraft carrier that can launch planes because the F-35 is their “combat ready aircraft” – their air assets would actually be dramatically outnumbered by the Iranians.