There is enough F-35 news to justify an entire F-35 blog, except the blog would suffer from severe cost overruns and its first posting would be almost a decade from now. And, naturally, it would consist of a fragmentary paragraph that did not say anything useful. What would we call such a blog? Perhaps “This is going to be great but it will cost a lot.”

It’s probably past the point where careers are going to be destroyed for this massive blunder, but I’m sure it’ll reverberate through the halls of the pentagon for decades to come: the idea of “let’s open the F-35 to everyone in NATO” was not well-considered because the NATO alliance included some characters that were on the fence, such as Turkey. The strategy was to use NATO membership as a way of joining the “pork for everyone!” club – once you’re in, you can participate in high-dollar fleecing of the public coffers, such as the F-35 program. This meant doling out who got to perform what parts of the service and construction of F-35s, which also meant that crucial information regarding the plane’s design had to be shared with everyone who got a slice of the pork. Turkey got two notable pieces of pork: construction of components of the nose-wheel steering system of the aircraft, and construction of the engine maintenance plant (which means that England, in principle, would have to ship their F-35s to Turkey for engine maintenance)

Turkey has been vacillating in terms of its allegiance to the US empire, and has lately been threatening to purchase Russian missiles, ostensibly to hang them on F-35s. As I mentioned earlier, the odds of that working are slim and none, respectively; it’s just a diplomatic threat. Turkey’s move is to say “we want to buy cheaper Russian missiles,” so the US says “no way!” and Turkey then says “we aren’t going to buy any F-35s, then!” and the whole scam starts to unravel. The strategy was bad to begin with – remember that, in order to get the Israelis to buy F-35s, the US had to give them money, earmarked for “use this to buy F-35s” thereby cleverly “selling” a bunch to Israel.

Presently there are 42 Turkish pilots undergoing training with F-35s in Arizona and Florida. [wapo] They are being ceremoniously booted out of the country:

In a letter Thursday to his Turkish counterpart, acting defense secretary Patrick Shanahan said that Turkish personnel also cannot participate in management activities related to the F-35 program, a consortium of a number of allied countries, each of which is responsible for building parts of the aircraft.

Turkish companies currently produce almost 1,000 parts for the F-35, including landing gear and fuselage components. The Pentagon is working with Lockheed Martin, the plane’s manufacturer, to find new manufacturers for parts that have been made in Turkey.

Oh, look, a pork-fight! You can be sure that: 1) lobbyists suggested this in the first place, 2) lobbyists will have useful suggestions who could fill those contracts instead.

The deeper problem is that those Turkish pilots have been playing with all the super-secret stealthy F-35 stuff, and Turkish aerospace companies have had access to all the system design and CAD files for the F-35. When we boot them out of the F-35 program for buying Russian missiles, where do you think all that information is going to go? I used to joke, “how do you steal Microsoft’s source code if you are China?” (Answer: “ask the Microsoft board of directors for it”) but it’s starting to cut too close to the bone. The same forces that complain about the theft of American intellectual property are the forces that are shoveling it over the wall as fast as they can, for a measly gigabuck.

One thing that’s for sure: the F-35 program ought to make us all ponder what “works” means. For a weapons system to “work” you’d think that would mean it delivers damage or defends or flies around stealthily. But in the case of the F-13 “works” means that it is a vehicle for transferring money from one set of pockets to another: huge amounts of money. Now that the US is run by a bunch of corrupt grifters, the F-35 is going to work harder than ever before. This is its finest hour. In fact, if we ever have a remotely responsible set of political leaders again, it will be cancelled.

Congress is in on the scam, too, of course. They are going to make sure that the F-35 “works” and continues to work until everyone has gotten their slice of pork: [bi]

See, the Gerald Ford has already been accepted by the navy, which means that the builders are going to get paid, in spite of the fact that it does not have working catapults. So, it’s an “aircraft carrier” to the extent that it can, indeed, “carry aircraft” but let’s not be hasty, now, it can’t launch them or anything complicated like that. Some good news is that its arresting gear may be ready by the end of the year! The arresting gear is the system that captures the tail-hook of an incoming plane and slows it quickly to a stop before it falls off the other side of the aircraft carrier. In other words the Gerald Ford does not “work” yet, either, unless by “work” you mean it in the sense the F-35 “works.”

Congress’ response to this “crisis” is to require that the Kennedy “work” before the navy forks over great big bags of money for it. The fact that the F-35 doesn’t quite “work” yet, does not elude them – they just don’t care. The US government has not yet learned that paying for something, before it works, is called “paying in advance” and it’s a dangerous practice to engage in whether you’re buying an F-35 or a new washing machine.

That’s one more aircraft carrier capable of deploying F-35s than England has! 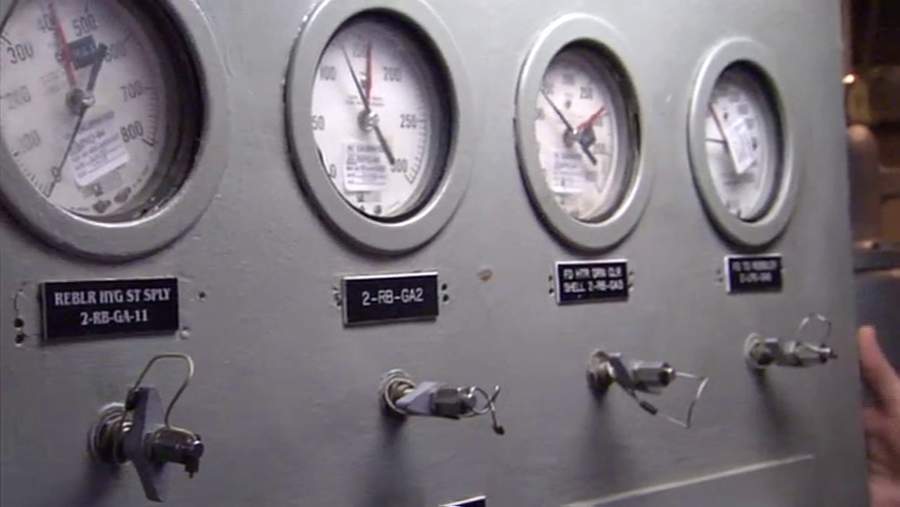 The steam catapult systems on aircraft carriers are an amazingly complicated and crufty system. The electrical systems designed to replace them are, too, but they have a different set of problems (like: water) and failure modes. Steam systems have unique problems like that you can’t get salt water steam into them or it’s amazingly corrosive and will ruin the entire system – that’s awkward when the ship is floating in a great big ocean of nothing but salt water. So they actually operate a distillery to produce enough water to drive the pistons. Distilling water is easy on a nuclear aircraft carrier: it’s basically a great big floating distillery to begin with. Obviously, the launch catapult has to work completely and correctly, or you wind up throwing a perfectly good insanely expensive aircraft (oh, yeah, and a pilot) into the ocean. From the height of the front of an aircraft carrier, that’s like flinging it off a building into a concrete parking lot. There’s a propaganda series about aircraft carriers (“Carrier“) [pbs] (not to be confused with former freethought blogger and litigious creep) made by Public Broadcasting – basically it’s a long hard love-fest with the navy. I wonder how much they were paid by the navy. I was not super impressed, as I was supposed to be, because I kept seeing everything as shabby and cobbled-together. What do you expect: it still runs on steam and its keel was laid down in 1968, around the time when Donald Trump was dodging the Vietnam war.