The reason we watch for hypocrisy, and call others on it when we see it, is because – in order to do hypocrisy, we must lie. Therefore, when we call out a hypocrite, we are negating any point they may have been trying to make, by demonstrating that they don’t really mean it; it’s especially hard for the hypocrite to claim ignorance or accident when they’re caught out.

Recently, Nancy Pelosi, Chelsea Clinton, and others, fired a barrage of rhetorical shots at Ilhan Omar for making an ill-advised tweet that can be considered to be antisemitic. The gist of the accusation is that, by accusing congress of taking money from AIPAC (the pro-Israel lobby), she was promoting an antisemitic trope about Jews with money being behind the scenes manipulating things. It’s not as though she quoted from The Protocols of the Meetings of the Learned Elders of Zion [wik] but from the drubbing she took, it seemed as though she might have.

So, every politician who didn’t jump out of their seat yelling “antisemitism!” when Trump tweeted this: 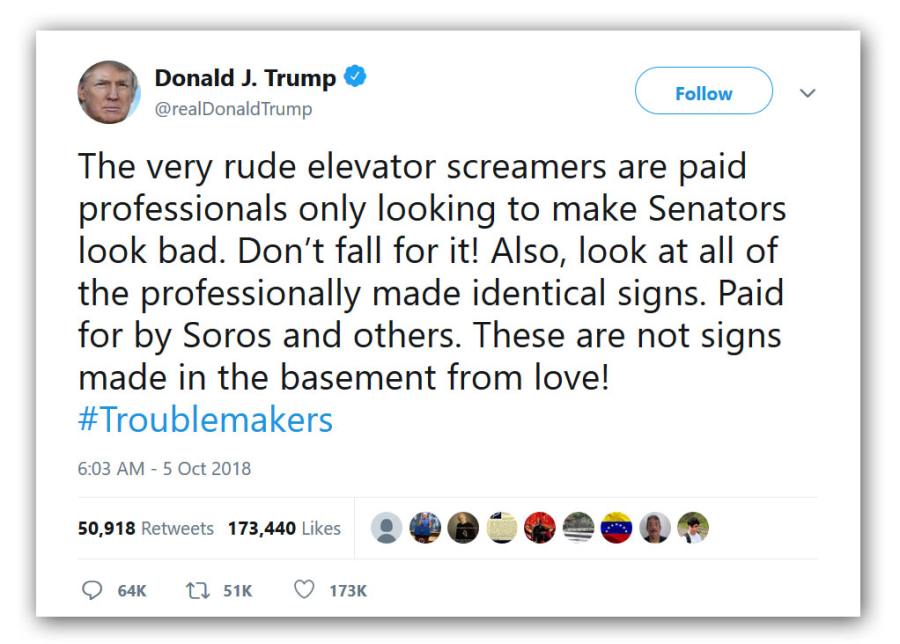 … is a hypocrite if they said anything about Ilhan Omar’s tweets. Anything that they have to say on this topic should be given extreme rhetorical vetting.

To draw between the dots, in case you need it, George Soros, billionaire and Jew, is often demonized by conspiracy theorists for being the powerful financial impetus behind a variety of weird things. Trump was not quoting from The Protocols of the Meetings of the Learned Elders of Zion, either, but he was closer to it than Ilhan Omar was. Other than the usual shocked cries at Trump’s crass, distasteful, badly-written twitterpation, the question of whether it was antisemitic was largely ignored – presumably because Trump can’t be antisemitic since he’s a big friend of Israel.

What a great load of bullshit.

This is not an episode of Argument Clinic but I’ll observe that it is better to deflect such criticism by focusing on supporting someone, rather than criticizing someone else. In other words, her better strategy would have been to say something like “I wish that BDS could afford high quality congresspeople like Nancy Pelosi.” No doubt there would be a massive outcry about her calling Palestinian’s rights supporters “poor.” Omar needs to level her game up; she’s playing in the top-tier deathmatch level against professional politicians who don’t believe anything, who will say anything, and who take money from anyone.

By the way, using charges of antisemitism as a cynical rhetorical trick is antisemitic, as it downplays the significance of a very real historical crime in hope of scoring cheap points in an argument. Anyone who’d use that trick is using accusations of hatred as a verbal club and the fact that they are doing so, lightly, shows that they don’t care about the 6 million very real dead in The Holocaust.

Also: did Trump imply that his supporters are basement-dwellers?

Circling Overhead » « Time to Get More Careful About Travel Options