I used to travel a lot. I’ve been cutting back because I’ve increasingly come to hate it, but today I just got a double fistful of new hatred.

Mostly, I use online booking services like Expedia and Travelocity (mostly Expedia) because they do a pretty good job of offering you up options that are convenient for you, sorted by price. Now, however, it appears that they’re changing their algorithms to offer you up options that are convenient for the airlines and the traveler is offered a discount based on how inconvenient it is for them. When I went to book my tickets for Stuttgart, I had a couple routings that were offered at $2,500 round trip, and one (SAS, via Copenhagen) that was $1,500 and looked OK.

Well, that is, it looked OK on the outbound. My fault, apparently, for not going over the routing with a fine-toothed comb and looking more closely at the return flight.

OK, yeah, that’s a red-eye flight. It’s nice to have the visual reminder that my arrival will be the next day. Thank you.

But how did this one come without any visual warning?

It seems that, “well, since the flight is not the reason you get there the next day, we’re not going to emphasize that you have nearly a full-day layover. 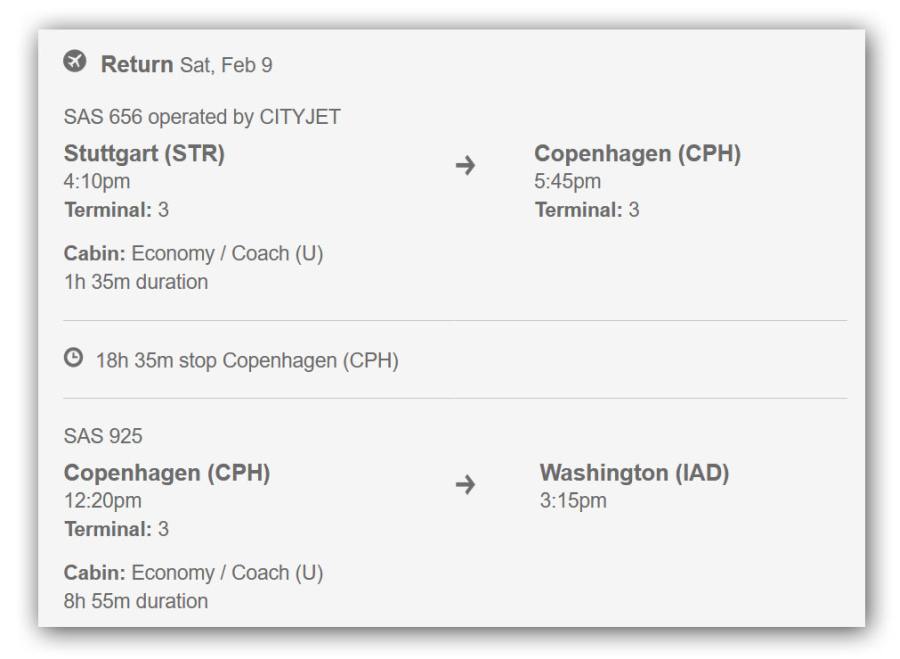 I book lots of flights and I usually have done pretty well with the recommended layovers from Expedia, but I would not have taken the “See Beautiful Copenhagen Airport By Night” rate if I had realized that a day of my life was going to get hard-flushed down the tubes. I’ve had days of my life a’plenty get flushed down the toilet of corporate convenience, but, damn, I feel like that was sneaky. If they’re offering me what appears to be a normal fare but is actually a discounted fare based on a miserable connection, I’d like to know what the difference was.

Now I have to get more cynical and skeptical and read these things much more carefully. Expedia is not on my side and I was probably stupid to not realize that all along.

Time to make lemonade. At least this will give me plenty of Executive Time to write the presentation for next week in Luxembourg, and I can get some writing and gaming done (which may as well be anywhere) – so, it could be worse. The last “layover from hell” I had was when I missed a flight due to security and United said they couldn’t get me on a connection until 32 hours later – so I camped at the Goethe Bar in Frankfurt Airport for nearly 2 full days.

And then there was the time, back when I had an “executive assistant” and they scheduled me with 45 minutes to make a connection through London/Heathrow airport. (Anyone who knows Heathrow will be laughing grimly as they read that) As it happened I got there and my connection was delayed by a half an hour and I was able to make it by setting a land speed record for moving belt broken running. Me and OJ.

I used to find the glamorous life of the high tech exec to be exciting. Now, it’s just annoying. I want to become a hermit and live in my forge making sharp stabby things that I will never, ever, be able to carry on an airplane and I won’t have to.

Update: my flight to Copenhagen is apparently delayed by an hour. With my 18 hour layover, I think I will still make my connection.

Update 2: A nice Swedish gentleman “guested” me into the gold card club, so I got to hang out someplace really comfy (with tea and cookies) until they chased me out when they closed at midnight.