For those of you that enjoyed [stderr] the podcast episode about snakes and ebola, here’s something related.

I’m not knowledgeable enough about the biochemistry and I’m only an interested amateur, but Scientific American has a piece about how apparently we farm prions in our eyeballs. [sciam] That’s my description, not theirs. Naturally, when we think there might be an unknown and badly measured reservoir of prions, we think “that might be relevant to Alzheimers'” 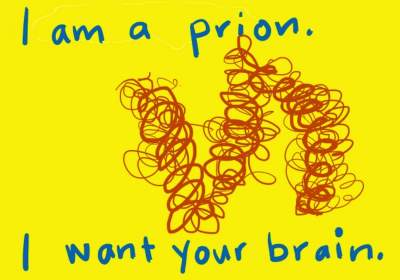 Since it’s the popular press I assume it’s 82% wrong, but it’s still interesting.

It was probably only a matter of time until someone connected the dots.

Prions – infectious proteins — had turned up in the eyes of victims of prion diseases.

Infected donor corneas had transmitted prion disease to recipients on at least a few occasions.

And often, patients who later turn out to be infected with prions have eye trouble for which they seek medical attention and testing before they are aware they are infected.

I watched Alzheimers’ take my grandmother and grandfather (both on dad’s side) and I’ve always watched my dad for any signs of unusual behavior (at his age now, “unusual” wouldn’t be) – and, from my perspective, losing my mind is a terrifying threat.

Enter the study published in November in the journal mBio by a team of American scientists that found the eyes of human prion victims are loaded with infectious particles even before they have begun to exhibit symptoms. Further, these particles are present on the surface of their corneas, the covering of the eye. 100% of the eyes of 11 sCJD victims who donated their bodies for study were seeded throughout with prions. 100% of their corneas contained prion seeding of a “low to moderate” degree. Because the cornea is enervated, the prions, which prey on proteins found in neurons, may be reaching the surface via these tiny neural conduits.

Given how much Alzheimers’ costs our civilization – in every sense of the word “cost” – it says something sad about our priorities that there are billions of dollars to spend on F-35s, and this sort of research is funded at the level where it is.

Something scary just occurred to me. What if “big pharma” read the writing on the wall and concluded that prions are implicated in Alzheimers’ and concluded there weren’t going to be any drug markets until there’s a couple revolutions in our understanding of protein synthesis? Now I’ve got reading to do.

Nature: Can you CATCH Alzheimers’?

The “I am a prion” illustration is not mine. It popped up on Google image search and I grabbed it.

Sunday Sermon: What Government Shutdowns Reveal About Anarchism » « Feathering It