During the big government shutdowns in the Clinton Administration, I remember thinking, “what a great way to get rid of government. Just stop paying for the useless !*!&#!!”

While I will say that Donald Trump is doing his level best to make “no government at all” look better than his administration, he’s also providing a cautionary tale that illustrates how “no government at all” collapses into autocracy. In spite of Trump’s best (by which I mean, he plays a lot of golf while Rome burns) efforts to destroy everything he touches, there are still pieces of government that are mostly trying to keep the system afloat in spite of him. Literally, in some cases, from spite. But I’ll take what I can get. 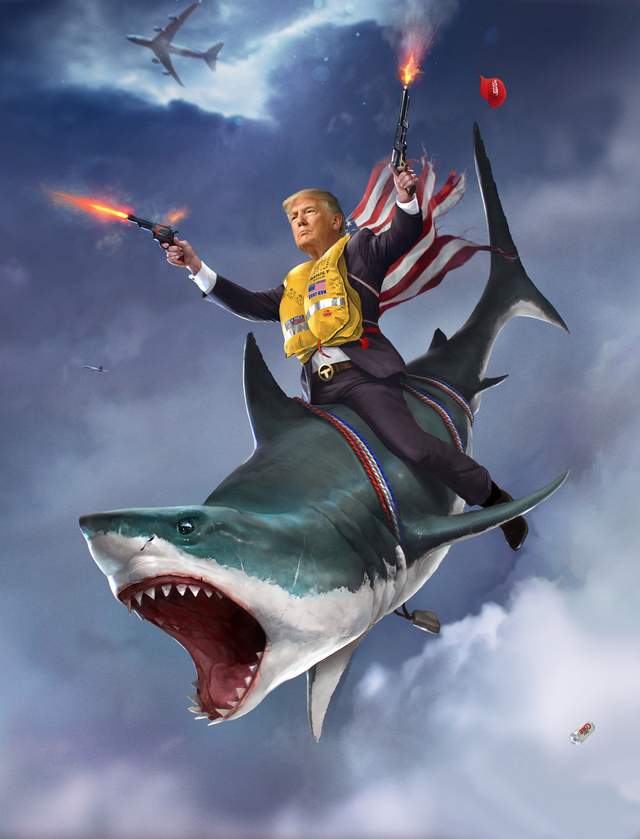 We’ve all been used to smooth operators like Barack Obama and, uh… Well, we’ve all been used to Barack Obama, who made the trains run on time and the bombs fall on the correct people. But Trump is something else: he shows us that a well-intentioned system constructed to serve the people is going to get gamed all to hell by the sociopathic political class. Where we’d see a government, for the people, by the people – they’d see a government for the taking. Anarchism does not address these sharks in bespoke suits, because it is impossible for a well-intentioned system to embrace and manage people who are fundamentally opposed to even their own self-interest. It’s tempting to call them “nihilists” but I don’t think they’re as thoughtful as nihilism requires one to be. I used the similie “sharks” because they haven’t got much of a strategy beyond “get in my mouf.” It’s a strategy that is remarkably short-term but it has worked for sharks for millions of years.

It has worked for sharks, because sharks don’t have nuclear weapons, and sharks don’t have the ability to open new parts of the planet for oil extraction, when the byproducts of oil extraction are killing all the sharks. They’re just sharks, they can only bite what is in front of them, one thing at a time; the damage they can do is limited by their nature.

Not so, our political sociopaths. By aggregating the reins of power so that they can be handed from one set of little hands to another, we have centralized a power structure that anarchism cannot address. First off, it will kill us all if we try to displace it or dismantle it. Secondly, it will replace itself with something just as bad if not worse. There have been a lot of creatures that have occupied the same niche as sharks but the sharks have out-sharked them for a long time. Perhaps the oil-burning humans will be the thing that finally brings the long line of successful sharking to its conclusion. It’ll be a pointless and pyrrhic victory; that’s redundant I suppose.

We anarchists need government because well-intentioned systems simply cannot summon the political will and structure necessary to deal with people like the Republican Party – a party so corrupt and of such ill will that it’s trolling the entire planet by pushing the financial interests of oil monopolies ahead of even the sharks’ interests.

I’ve been noodling over this, and I feel like my mind is swirling around like water down a toilet: I want to use the word “nihilism” to describe Trump’s politics, but Trump has managed to create a system that is worse than nothingness. Remember: a nihilist is a radical skeptic; a person who doubts and does not accept beliefs – especially not political or moral ideologies. A nihilist would not [*] hold beliefs so strongly; they’re more like the peaceful anarchists who believe they don’t have to have a government because they don’t want to be bothered to form one.

There must be a term for this unbelief that is not nihilism; this belief that anything of value must be trolled to death. Everything that is beautiful (or that was accomplished by Barack Obama) must be used to wipe the asshole that is Trump. It is “un-belief” – a reflexive meanness that expresses itself in pointless destruction. As I write this, Trump is gloating over how he’d happily shut down the government if he doesn’t get his vanity-wall, and Nancy Pelosi and Chuck Schumer – more sociopaths – haven’t got the courage to tell him “if you shut down the government, who the fuck do you think is going to build a wall, then?”

That tells me anarchism is a lie, too: we can’t shut the government down, unless we have a government to shut it down with, and that would be Hobbes’ Leviathan.

We are stuck with these people, forever, until they kill us all.

[*] Bakunin helped establish the mis-characterization of a “nihilist” as someone who wants to destroy everything. As a skeptic, I see “I want to destroy everything” as a dogmatic view (in the pyrhhonian sense) – it is taking up a position. More to the point, it’s making a moral assertion, namely “things are worth destroying.” Embedded within Bakunin’s quip (he wasn’t really saying that, seriously, as a political option) is the idea that not only do things not matter, they un-matter.

The Tao: Chapter 7 – Enduring and Everlasting » « In Your Eyes