The Trump Administration is swirling around the drain, but they’re probably too chunky and stubborn to flush. Instead, we’re going to wind up with nasty-water all over the place and blocked political plumbing. The republicans are playing the “blocked toilet” strategy in every state where they still have enough power to cling to, why would anyone in their right mind expect a party of power-hungry authoritarian goons to let go and walk away nicely?

What bothers me most, right now, is how the media is fawning all over Robert Mueller and James Comey – a pair of authoritarian goons who are long-standing paid-in-full members of the Washington Swamp. In case anyone has forgotten, Mueller buried the Bush Administration’s torture program [stderr] – violating, in one fell swoop, everything the FBI officially stands for. If you understand the FBI in its unofficial capacity as the oligarchy’s secret police, then Mueller was just complicit “following orders.” Mueller’s defense of the FBI’s inaction in the face of the CIA torture program laid a roadmap for Comey’s defense of his choices that led the FBI to interfere with the 2016 election – initially swinging the spotlight onto Clinton’s emails and eventually claiming that he was just following established procedures. That was, naturally, bullshit; the FBI didn’t issue any press releases about Ivanka, Donald Junior, or Daddy Trump using personal Email servers and communications in order to conceal election finance fraud. 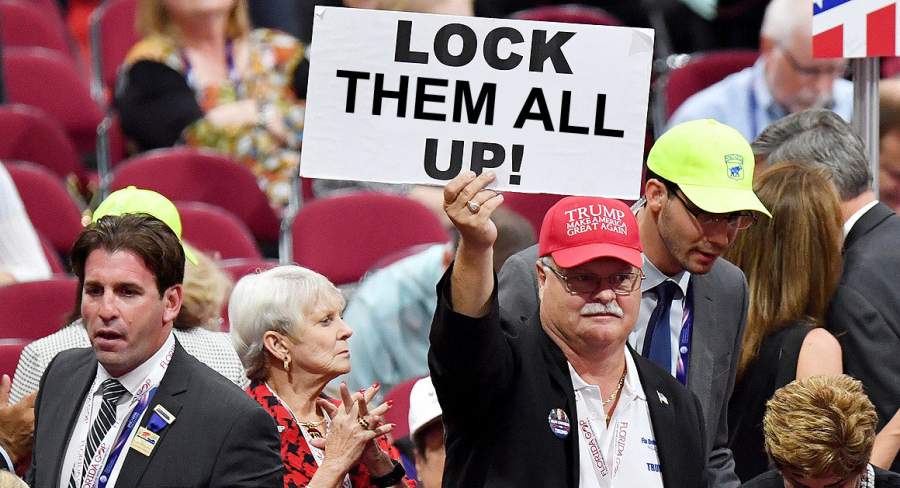 I just want to bring this up to remind us all: Comey claimed that the FBI had to loudly and publicly investigate Clinton, including making releases at times that were deliberately damaging to her campaign, and now we learn that the FBI had been investigating electoral fraud and financial shenanigans in a number of members of the Trump campaign around June 2016 and never said a thing. If talking to the press about Hillary Clinton’s email server stupidity was such a moral necessity for Comey in the fall of 2016, are we to assume that evidence that the Trump campaign was doing mob-style payoffs through shell companies was unimportant?

Comey’s up there giving testimony and pretending to be the aggrieved party, when congressional fake investigations are digging into his choices; hint: they are deliberately looking for the wrong thing. [12news]

In a closed-door meeting with members of two congressional committees, former FBI Director James Comey was grilled on his handling of the Hillary Clinton email scandal and the beginning days of the Russia investigation.

While Comey dodged questions pertaining to the ongoing Russia investigation that special counsel Robert Mueller now oversees, he did provide new insight into the origins of the probe, according to a transcript of his Friday appearance that was released Saturday.

Comey said the FBI’s counterintelligence investigation into potential ties between the Trump campaign and Russia originated with four Americans who were thought to be potentially helping the Kremlin in its efforts to interfere in the 2016 election.

Of course the Republicans don’t want all of Comey’s testimony to get out, because then it will be clear(er) that they knew Trump was mobbed-up and were notified that Russia appeared to be seeking to influence the election – but “hey, it’s going our way, so shut up.” Note: Comey did, in fact, shut up. He went to the press about Clinton’s emails, though. 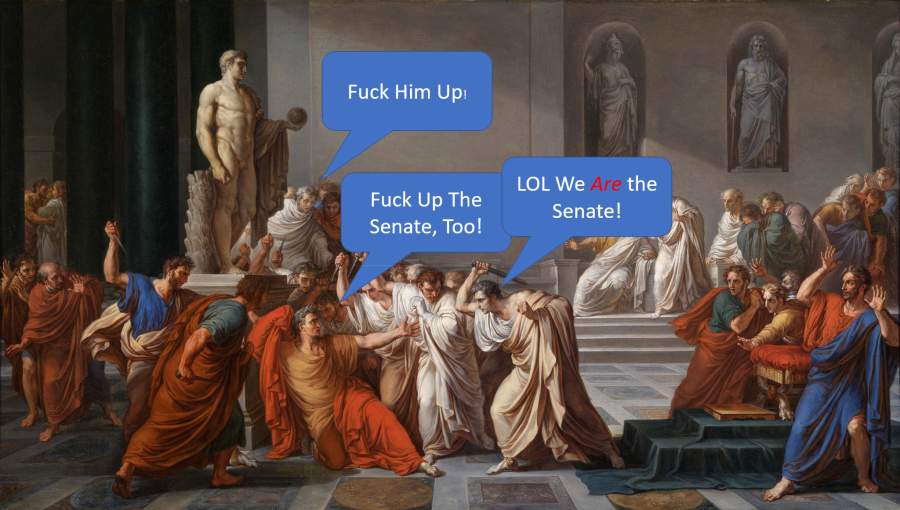 The whole thing is a shit-show of venality, hypocrisy, boss-level corruption, and distinctly Trumpian stupidity. Trump didn’t realize that Russia and the Republicans in Congress were both using his past actions as control-levers above him. It sounds to me like he is almost justifiably feeling betrayed that the great Washington swamp-machine pried apart his lawyers and fixers – something they don’t allow to happen with their lawyers and fixers, not for a second. It’s the Washington stealth veto: let’s elect someone we can break over our knee if we have to. Trump just didn’t stay in line because he’s made the mistake of thinking he runs the show.

Remember when Brutus nearly got away with murdering Caesar because “as he was ambitious, I slew him.” The Romans knew how to clean a swamp: let the swamp-dwellers eat each other and let the patrician blood smear the marble. I’d support that kind of politics today, except that the blowback is nasty.

If you gaze into an abyss, let your eyes adjust and if you look carefully in the shadows, you’ll see a sign that reads “BE MORE CYNICAL.”

In the past, I posted comments about Clinton’s emails. At that time, I mentioned that I do not care if she had a private server but I focused on the fact that she was reflexively lying for no strategic purpose. In fact, at the time [stderr] I was primarily concerned with pointing out that Clinton was lying when she said she didn’t understand the email stuff. Just like Ivanka was lying when she said she didn’t, either. Of course she did – she had just spent 2 years listening to people chanting “lock her up” about Clinton, for doing what Ivanka herself was doing.

There is another aspect to this whole mess that interests me: who the fuck is Michael Avenatti? I mean, other than a media manipulator who appears to be completely unconcerned with much beyond self-promotion? I have been disturbed to see the media paying him so much attention, as if he’s some kind of cure for Trump, when actually he appears to be a younger, smarter, more energetic version of Trump. Why does anyone look at Avenatti and think “that guy is on my side”? He seems to me to be the kind of guy who’ll throw you under the bus but only if the cameras are running and he can tell a good self-serving story about it. It’s still unclear where the money for him to go after Trump came from – does anyone want to bet that it wasn’t from some Trumpstyle shell companies set up by a more competent political operative than Michael Cohen? At one point in his career, he worked as an ‘opposition researcher’ for Rahm Emmanuel’s Chicago machine. The stink of swamp is all over the guy.