One of the worst things about Russians (especially Soviet Russians!) is that they use propaganda to indoctrinate their people into the dictatorship of the proletariat.

Those are ringing words, aren’t they? “Dictatorship of the proletariat” sounds almost like something Orwell would have come up with. That’s because it was cooked up by the US’ own propaganda department. 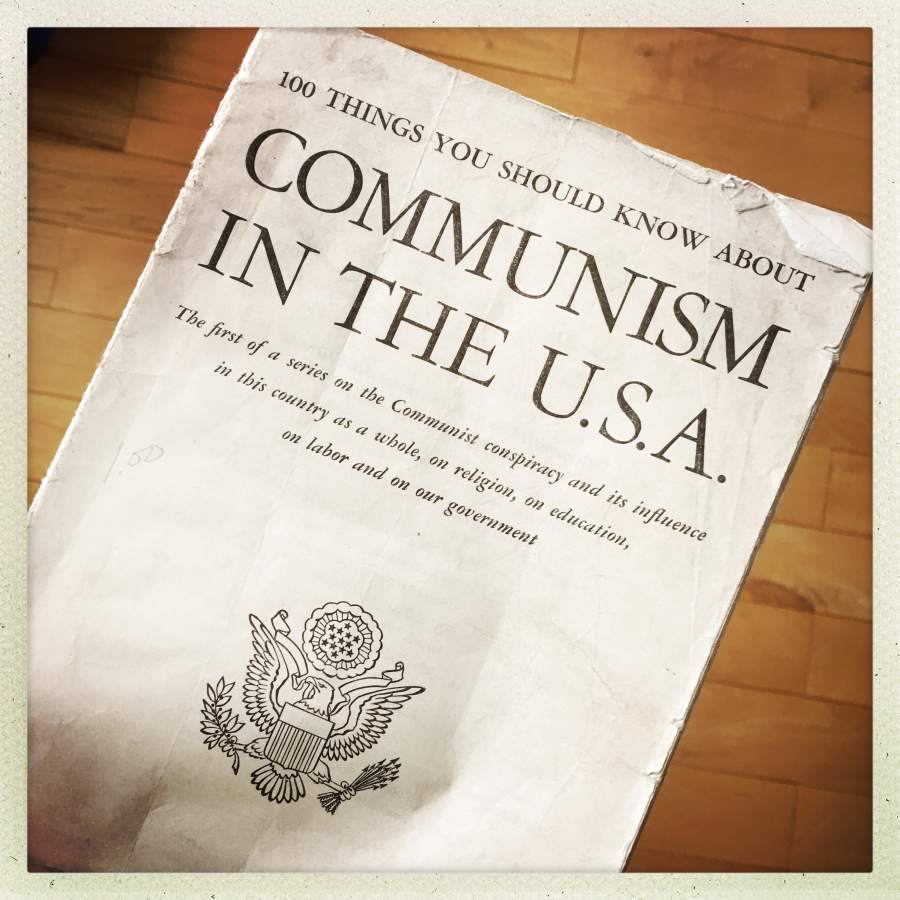 It’s pretty amazing, the things you can find on Ebay. That pamphlet was “Prepared and released by the Committee on Un-American Activities, U.S. House of Representatives” – HUAC – Joe McCarthy’s boys. McCarthy, if you’ll recall, used to claim that he had a list of “over 200 members of the Department of State that are known communists.” The list was, naturally, a lie. McCarthy was a propagandist. He used the US Government to push his lies to the people, thereby deliberately bypassing any sort of democratic process in which The People would be able to assess the truth of what was being said, and to decide how to respond.

The contents of the pamphlet are an interesting exercise in moral nihilism: the worst and most bald-faced lies are told with a straight face. Clearly, whoever published the pamphlet believed that the ends justified the means – i.e.: it was worth lying to the people to protect them from the lies of communism. Or something. That’s why I call it ‘moral nihilism’ – there is no underlying reason why we should believe one set of lies or another.

How do the Communists get control?

Legally or illegally, any way they can. Communism’s first big victory was through bloody revolution. Every one since has been by military conquest. or internal corruption, or the thread of these.

I am reminded of the old joke: a Soviet farmer says to another, “You know, under Capitalism, man exploits man. Under Communism, it’s just the opposite.”

Conspiracy and iron force are how all governments create themselves; they call it “legitimacy” and once they are established they call it “the social contract.” 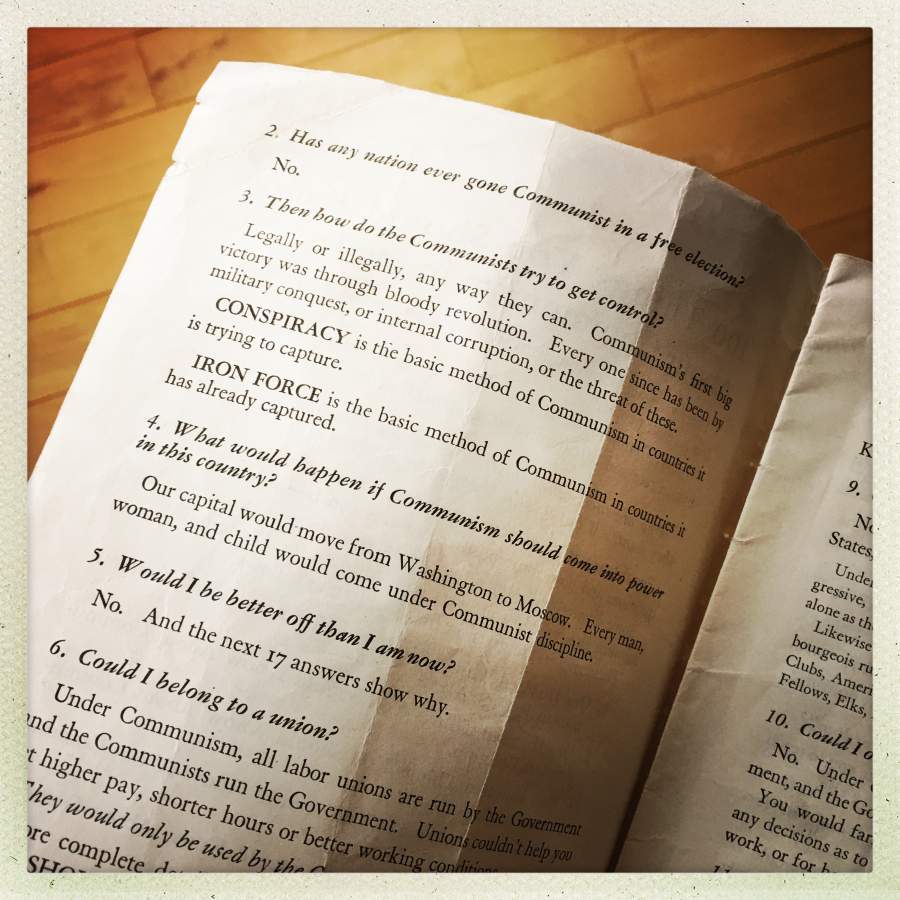 This is a great load of lies. 17 pages of them, and then Appendix A, which is a list of the “Principal officers and offices of the Communist Party, USA as of 1947.”

This is a great load of lies for good. These lies are to save America from a fate worse than death: having to admit that its ideals of democracy are also lies. 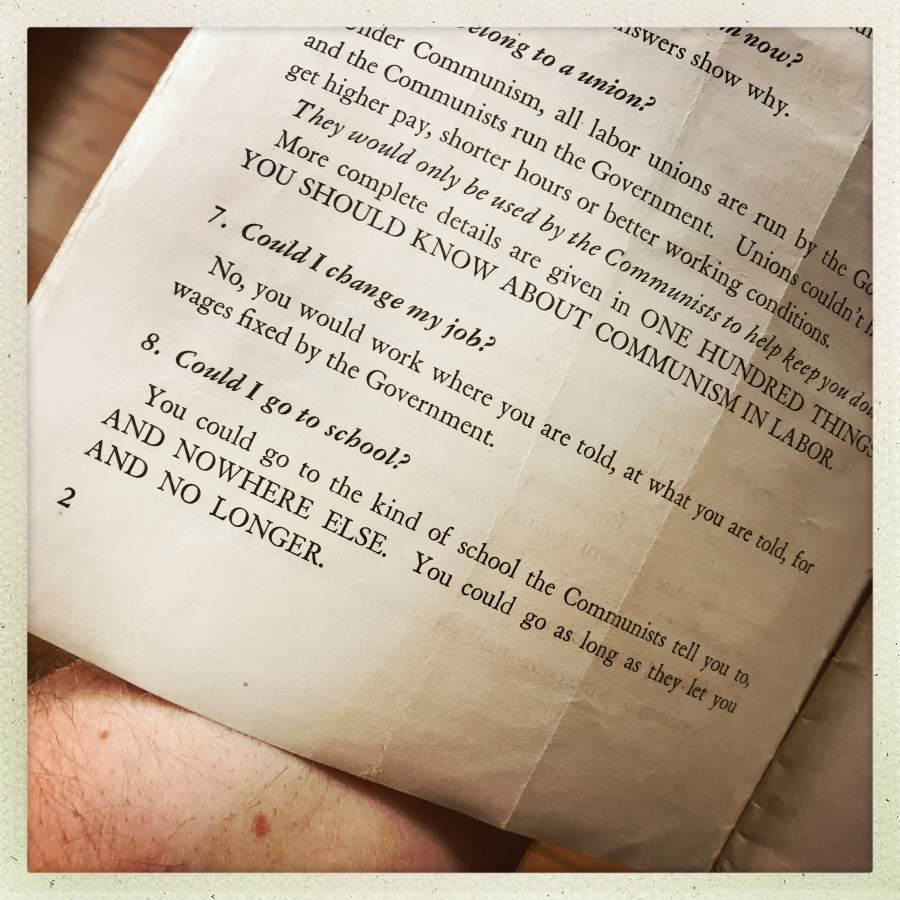 Because in the US, the Government would never get involved in setting a minimum wage, and would never fight tooth and nail to protect corporate interests by preventing that minimum wage from going up or down as necessary to reflect the needs of the people. In the US, the Government would never send the National Guard to break laborer’s strikes and defend the interests of industrialists, in order to prevent laborers from negotiating from any kind of position of power. Under Communism, man exploits man.

8. Could I go to school?
You could go to the kind of school the Communists tell you to, AND NOWHERE ELSE. You could go as long as they let you AND NO LONGER.

And you certainly could go to any public school that was open to people of your skin color, and you would definitely not find that the ruling class’ schools were nicer and afforded better opportunities if you could pay for them. Those nasty Communists are going to tell you what school to go to, just like we will!

I will not force-march you through these pages of lies, but you get the idea: propaganda is bi-directional. When someone starts telling you to beware of propaganda – it’s probably propaganda. What fascinates me about this stuff is that you could run through it and re-target it to make the same assertions about pretty much anyone, and it wouldn’t require any editing beyond changing the names. That’s one valuable technique for detecting lies: if you can take a bunch of assertions and re-target them and the value of their argument doesn’t change, then it’s probably not tied to much in the way of fact.

Here’s a trick that should be immediately recognizable by any fan of bad argument: well-poisoning: 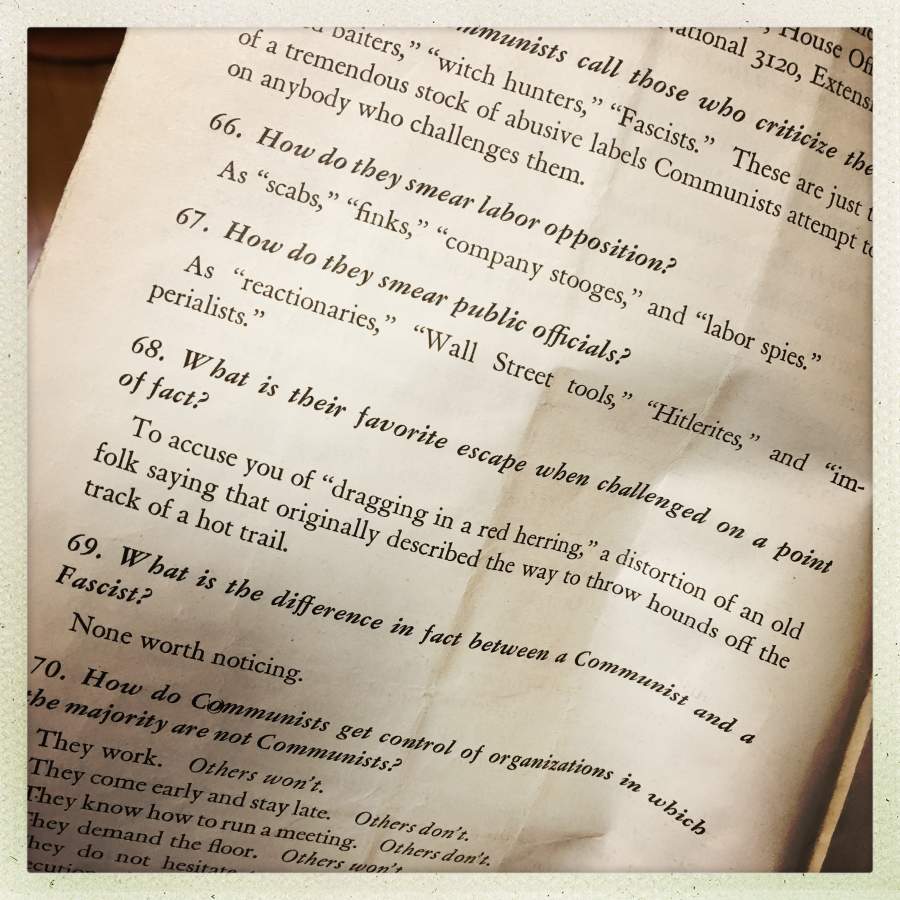 If they call me a liar, it’s probably “fake news.” If they make such-and-such an argument it’s “boring” or “tedious.”

68. What is their favorite escape when challenged on a point of fact?
To accuse you of “dragging in a red herring,” a distortion of an old folk saying that originally described the way to throw hounds off the track of a hot trail.

69. What is the difference in fact between a Communist and a Fascist?
None worth noticing.

Well, then, how am I supposed to tell you all apart? Communists, fascists, capitalists, oligarchists, and pseudo-democrats look a whole lot alike to me. Should I just support the one that’s wearing red?

#70, which I cut off in the photo, is a pretty good one, too: How do Communists get control of organizations in which the majority are not Communists? They work. They come early and stay late. They know how to run a meeting. They demand the floor. Wow, who wants people like that in their organization?! Not me!

Remember, this pamphlet was written by the same imperialist faction that has suppressed democratic governments around the world – overtly and covertly, with money and marines, with CIA and Starbucks. They’re telling you to be afraid of communists doing the same thing to you that they’ve done, because we’re the good guys and they’re not. I recall when I was a kid during the Vietnam War and first heard of the “Domino Theory” and asked why we didn’t just see if people voted to become communists. Well, that’s unacceptable! Communism (as the pamphlet tells us) only comes after bloody overthrow. It doesn’t seem to enter into the equation that the only way to get a capitalist pseudo-democracy to unclench its tick-like feeding mouth-parts from the body politic is to grab it behind the head with tweezers and twist and squeeze. 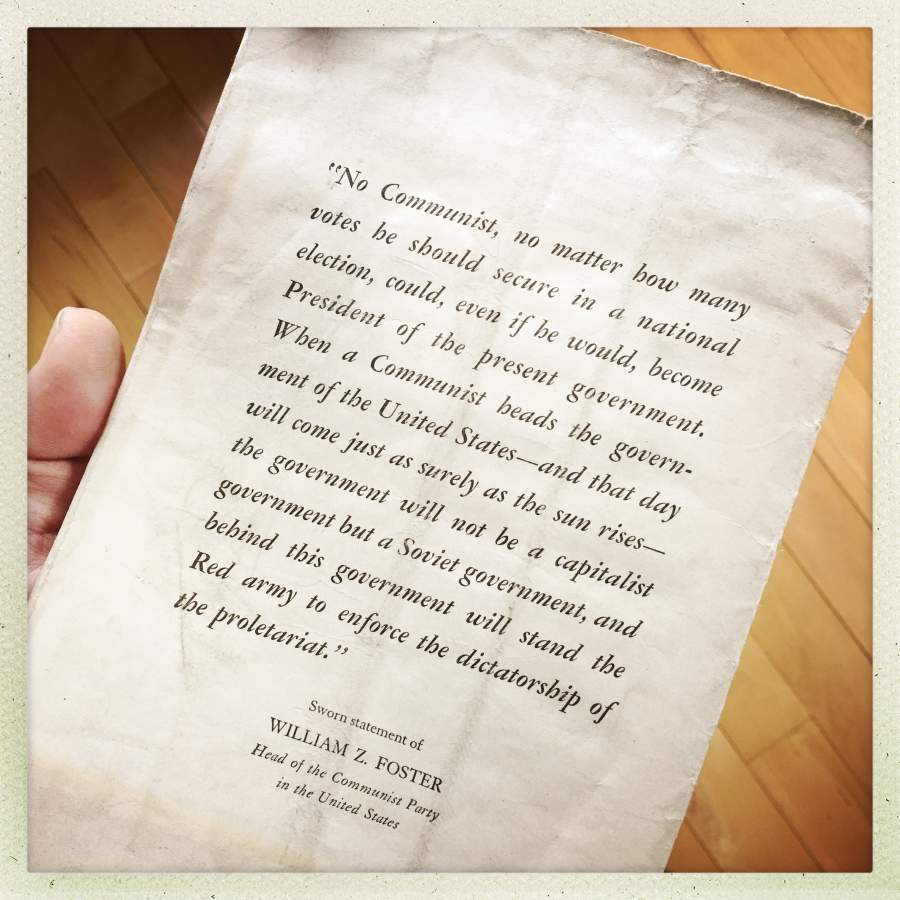 There were some embarrassing things said by Communists around the time of the depression. It made sense, in fact – we had just seen a bloody shambles of millions of wasted lives because oligarchs could not non-violently re-align after the industrial revolution. The easiest way for them to sort out a new political order was for their over-bred dingbat elite to have a great auto da fe in Flanders and Brusilov. Negotiation would have taken effort. The disaffection resulting from World War I manifested itself among many intellectuals as a re-assessment of Socialism (Einstein) and political philosophers like Rawls exploring the idea of a fair society. Philosopher of education John Dewey, who had done a great deal to modernize American education, was demonized and dismissed for being Communistic, and philosophers like Bertrand Russell had to publicly disclaim their support. In other words, propaganda campaigns like this one, worked.

When I say that the propaganda campaign worked what I mean is that it obviated the need to actually do anything to make capitalism/oligarchism look better. After all, if capitalism really was so flippin’ fantastic for industrial workers, they’d be cheering wildly as they went to work, not striking for better pay and safer working conditions. Seems obvious, right? Maybe all this propaganda is, you know, a red herring – a way to throw hounds off a hot trail.

When we start to look at the sea of propaganda around us, dealing with it is obviously not possible. It is, I think, the salient attribute of the political cultures in which we live. That’s why I have great sympathy for the post-modernists, who try to teach us that our perceptions of practically everything are not objective, and are culturally constructed. From that angle, I see post-modernism as a rational response to propaganda: reject it and see it for what it is, then try to move on. I hate the awareness that marketing, public relations, and propaganda do more to form our reality than just about anything else, which is why I desperately seek for reality in small, experimental, tangible things – things that are small enough that the marketers have not yet decided how to “influence” or “monetize” them. Yet.