It is not enough that our leaders have power; they want to be loved. That’s a fairly consistent pattern in powerful people; I think that sometimes it’s that they want to be able to convince themselves that their route to power was not ruthless and corrupt, or that they didn’t abuse their underlings too much.

Andrew Carnegie, before he died, re-invented himself as a “philanthropist” and threw money at America – in the form of gifts to the upper class. It’s not like he was paying dues at an exclusive golf club, nope, nossirree! It’s not like he did anything for the laborers who did the work that made his money: his philanthropy was aimed at his new peers – the social aristocracy he wanted to be come a paid-in-full member of. Meanwhile, he propagandized us all with his “Gospel of Wealth” which was mostly a bunch of self-justifying motivated reasoning that ignored labor’s role in achieving his vast achievement. What is wrong with these people?

My opinion is that, by attempting to farm plaudits, they reveal their own uncertainty regarding their actions – after all, if they really knew they had accomplished great things, they wouldn’t need to hire people to do public ego-stroke-jobs.

This is a bit of propaganda I stumbled across a year ago, and it’s been sitting on my propaganda-heap while I periodically scratch my head and decide what to make of it. Why does this book exist? Who funded its creation? Why didn’t they spend a couple hundred thousand dollars more to make it a best-seller? 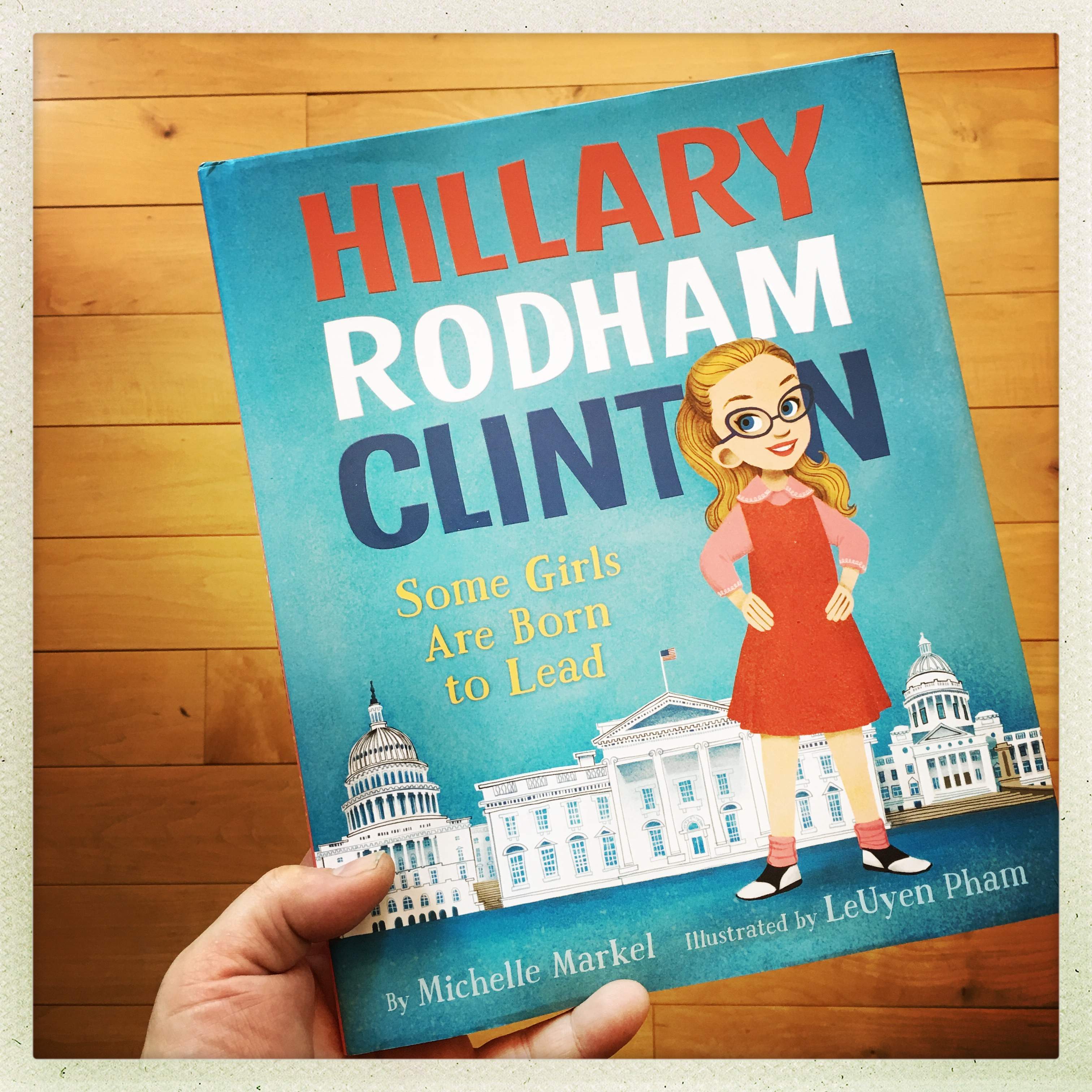 Don’t get me wrong: I voted for her. Because I had no real choice; the alternative was a suit packed full of fish guts and lies.

This is a pretty obvious attempt to build a cult of personality around a politician. In principle, I find that acceptable because that’s all that I think politicians are: a personality cult stuffed inside an empty suit. In order to get to the higher reaches of the US political process, you cannot (until Trump) survive without making the right deals with the right people, without compromising yourself on this in order to get that. That’s why I have relatively little respect for Bernie Sanders, who leveraged his campaign onto the shambolic Democratic Party machine, then discovered that it was corrupt and a shambles – something I expect anyone who has been in politics for 20 minutes to have figured out.

So, it’s OK to have someone write a laudatory book of propaganda about a prospective office-holder. But it seems extremely skeevy, to me, to aim it at kids. Kids have not yet built up a resistance to propaganda. Oh, maybe that’s why it was aimed at kids? 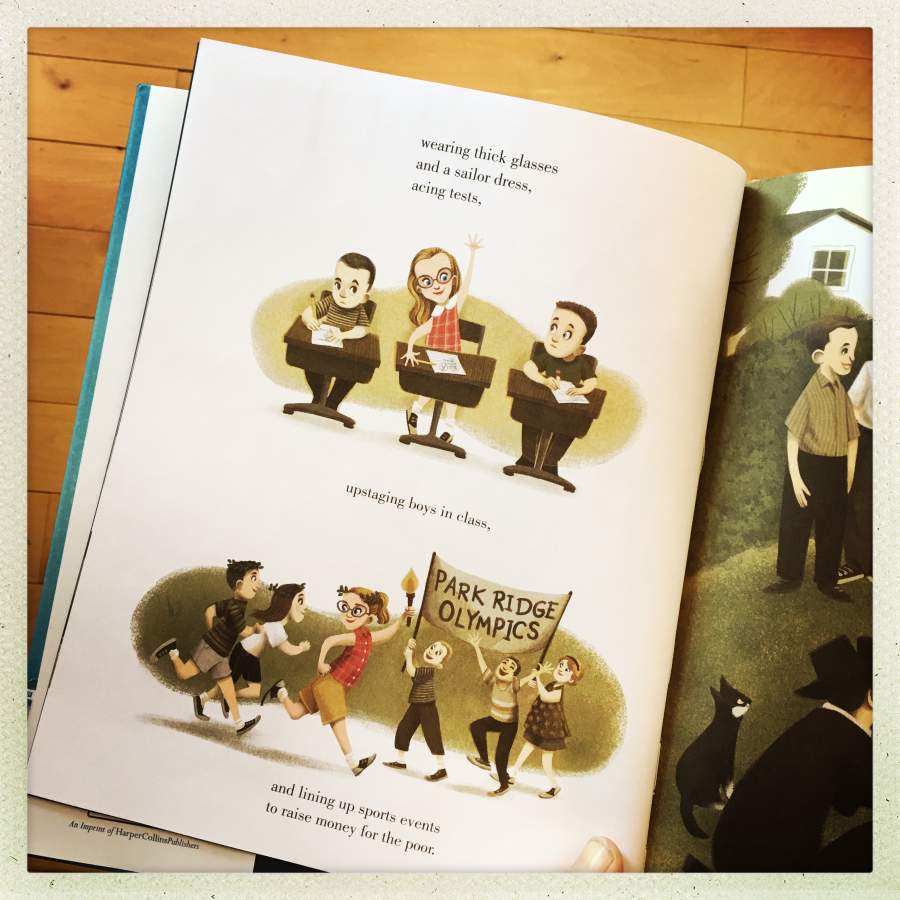 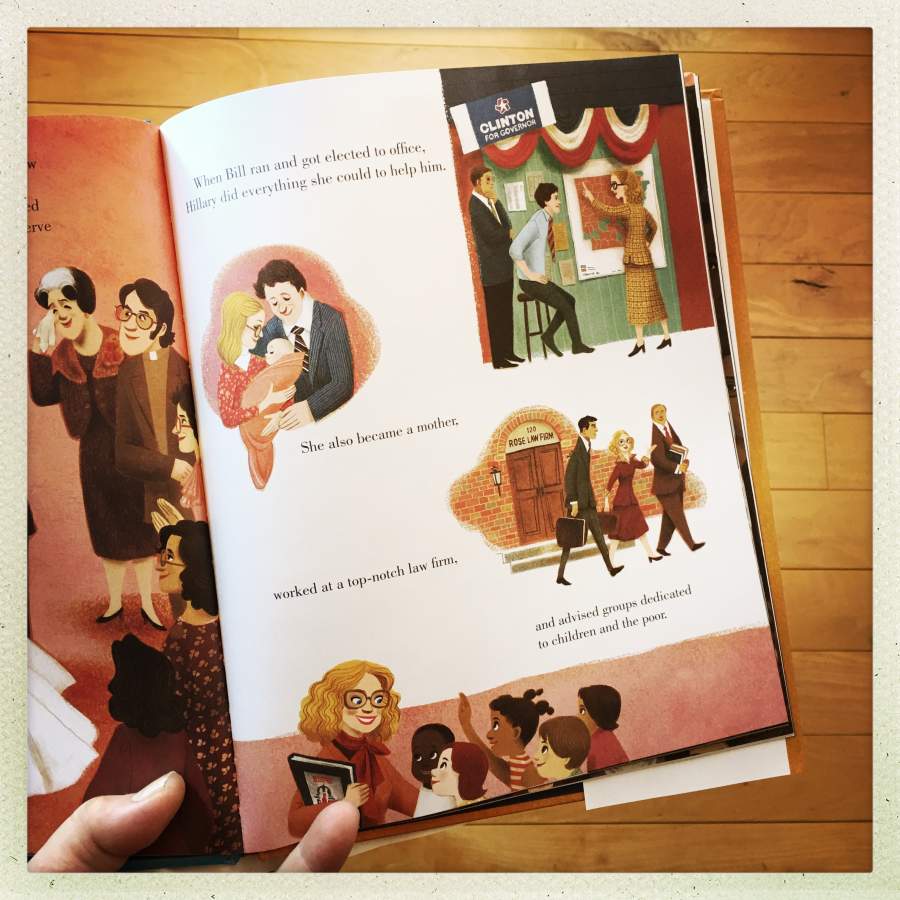 And I’m thinking, “I can’t wait to see what the illustrator did with her ‘we came, we saw, he died’ speech” but, strangely, that moment is erased from history. It’s more important to know that the candidate wore glasses, I guess. This is what Howard Zinn means when he talks about how history is as much what’s not recorded as what is.

One thing needs be said: I think it is important to teach kids about how gender roles affect our politics. I think it is important that Hillary Clinton faced extreme bias due to her gender, and was attacked long and hard by vicious misogynists (called “The Republican Party”) for years. So it’s good to represent to kids that a young woman like Hillary Clinton can be just a consumed by power, just as willing to try to do anything it takes, as a man. But presenting her as though she’s a candidate for sainthood is laying it on a bit thick. 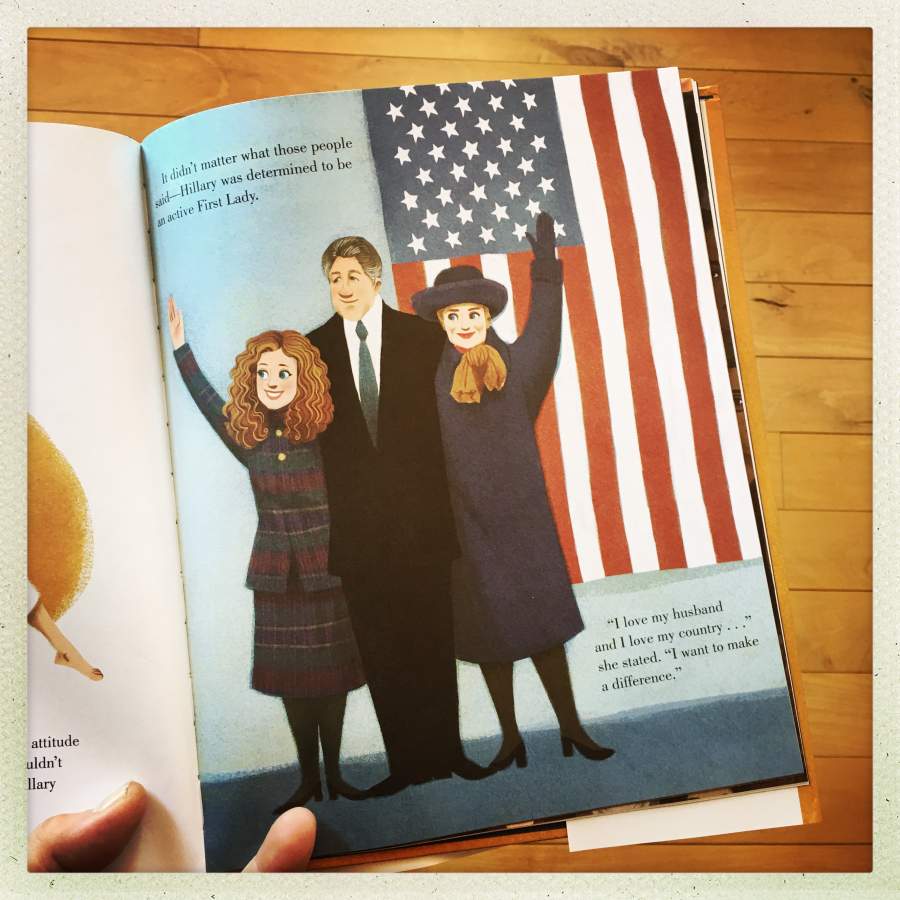 I think that the automatic granting of even a small public policy role to the spouse of the president is a terrible idea; it smacks of aristocracy. If we wish to maintain the facade of a democratic republic, there is no role for nepotism. We’re seeing that blow up in our faces under the Trumps: we have his son-in-law, daughter, and sons all involved in national politics to a certain degree simply because they are his kids. It’s all subtly reminiscent of North Korea, where the party boss’ kid is groomed to be successor.

But, back to authenticity: if the premise of democracy is that people choose their leaders based on what they know of them, is not lying about those leaders anti-democratic? Is not propaganda about prospective leaders merely an attempt to manipulate the electorate? You know, like Russians do. 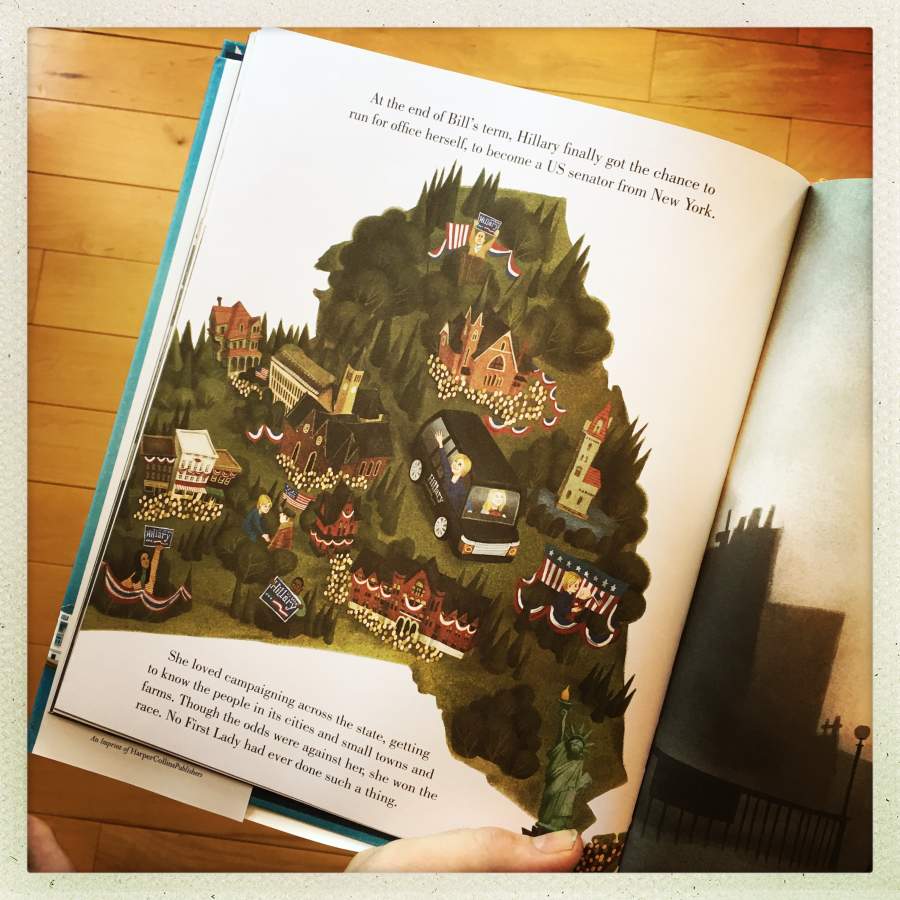 This is another lovely bit of spin: the reason Clinton didn’t know the voters in New York, where she ran for Senator, was because in 2000, she had never lived or spent much time in New York. She took up residency in that state because when Daniel Patrick Moynihan retired, there was an open seat, and both political parties sought to recruit someone who could win the state: someone high-profile and promotable. Clinton’s not a particularly awful example, but you should remember how that works when someone talks to you of “representative democracy” – the premise is that a politician ‘represents’ their constituents interests. But, sure, how about a transplant from Washington? 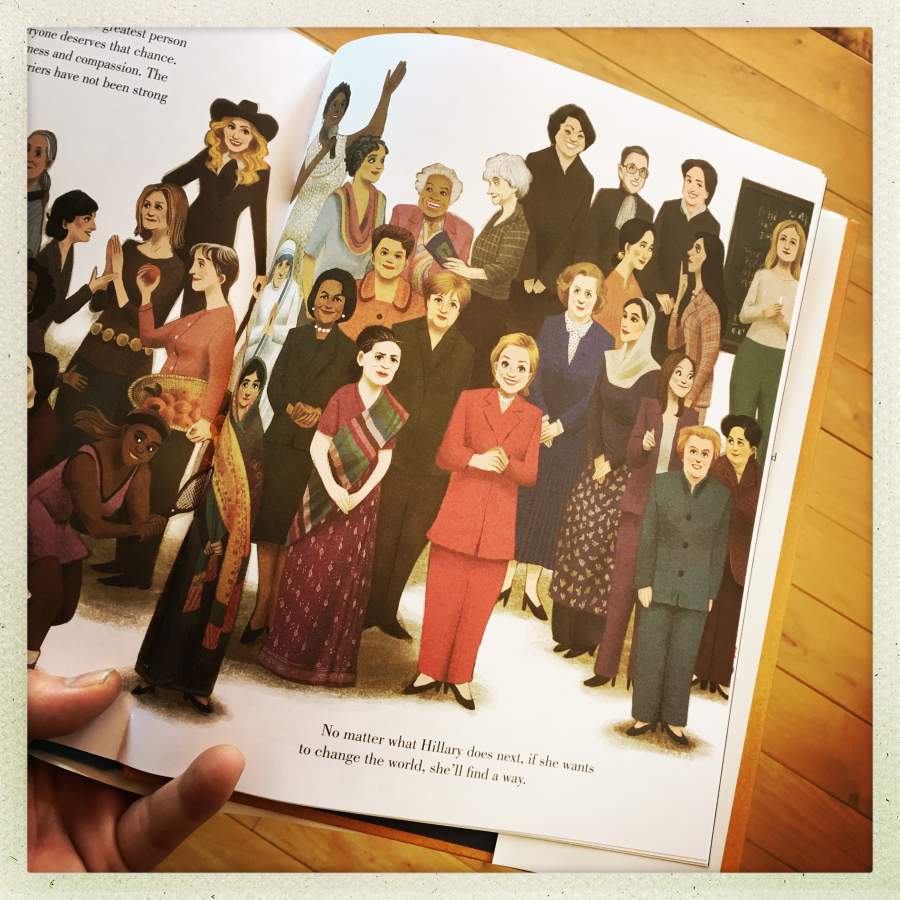 Oh look at all the people in their quaint ethnic costumes. Is that Madeleine Allbright hovering over her left shoulder? Where’s Henry Kissinger? I see mother Theresa on the fold, and one of the Williams sisters playing tennis. What a happy scene!

Of course, Hillary Clinton is hardly the first politician to have propaganda written about them. Donald Trum’s The Art of The Deal – which was badly ghost-written – was a pretty good pile of plaudits for douchebaggery long before he had political ambitions.

It makes you wonder if there are any kids’ books about how awesome Stalin was, floating around out there.

Politicians want you to worship them for the worst of all possible reasons: to glorify their egoes, or to increase their chances of being able to remain in power. They’re so ruthless that they don’t draw the line at propagandizing kids; that’s how important power is to them. That is how “trustworthy” they are.