This is some of the best soap ever. Those of you that I am sending refrigerator magnets to will probably also get soap as well. Be forewarned, if you are allergic to cocoa or coffee you don’t want to use this soap. But, here is a recipe and walkthrough.

A few years ago I was at a security conference and encountered another soap-maker. I gave him a rough thumbnail sketch of the ingredients list and discovered later that he’d gone home, whipped up a bunch, loved it so much he started selling it at a farmer’s market. He retired and now he’s a full time saponista.

Here is the recipe: It’s not like it’s the secret plans for an F-35… Think what this soap would cost if it were… 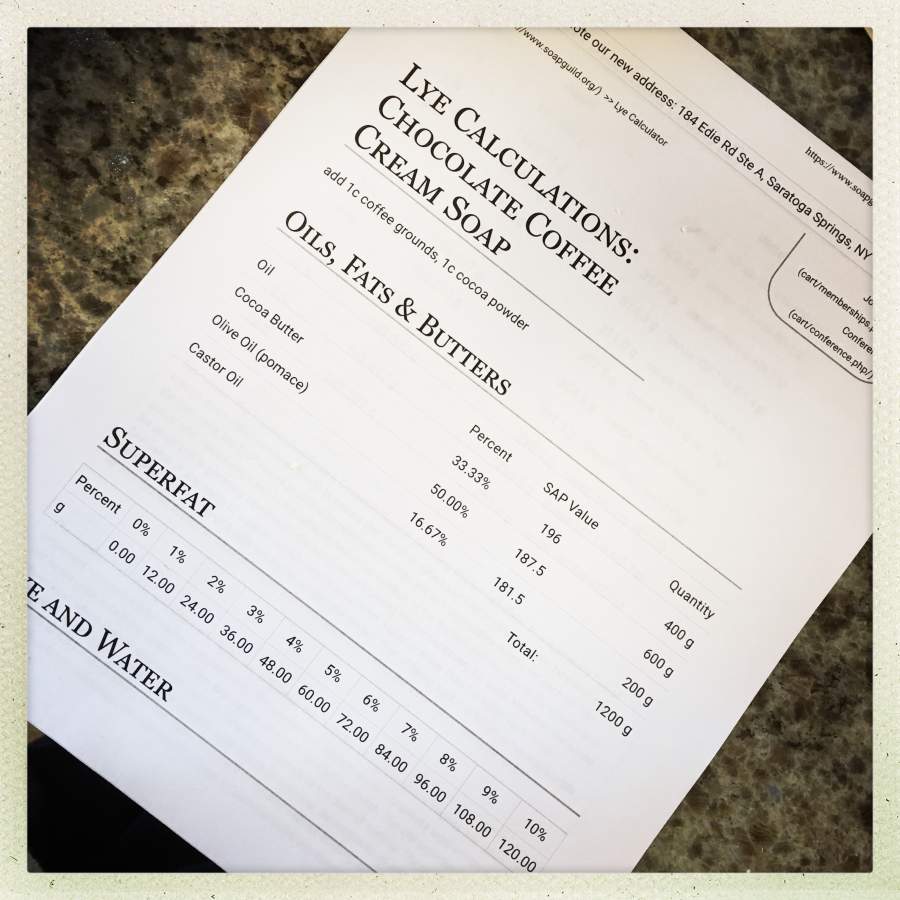 You could use just olive and cocoa butter if you like; I like castor oil because it makes silky smooth suds.

Right, so you start with your ingredients: 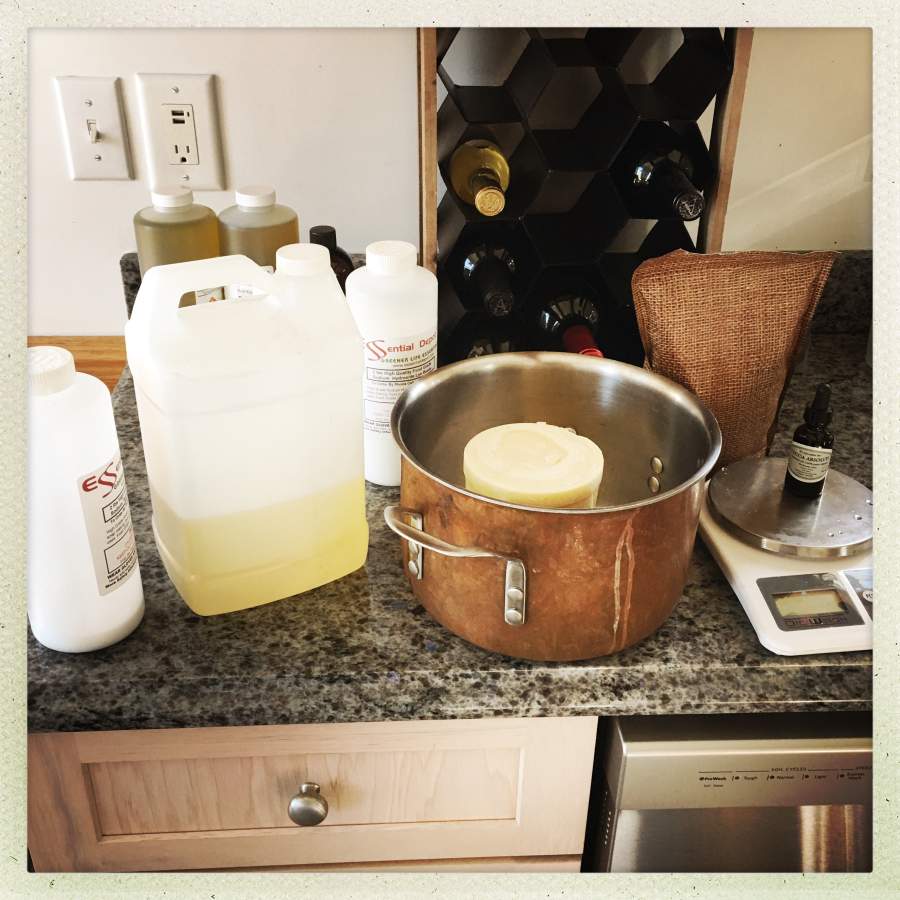 This is a largeish batch, at just over a kilo. I usually use a pyrex baking pourer to mix my soap, but it gets a bit full if I go above about 800g of soap (by the time you add the lye, you do not want stuff slopping all over the place). 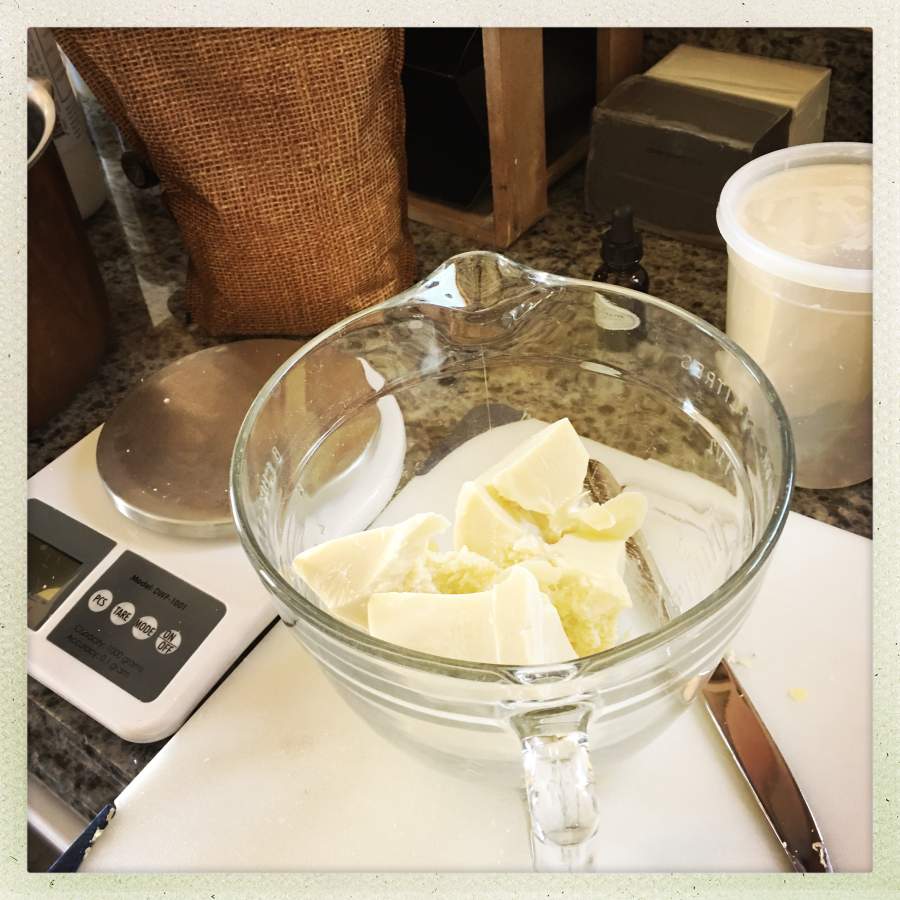 Cocoa butter at room temperature is hard and waxy. I like that because it means the soap sets up nice and hard and quick, too. The trick is to get the cocoa butter melted while the lye is cooling (more on that in a second) and then use the olive oil to cool the cocoa butter down a bit. If you get soap too hot it will speed the reaction with the lye and you get an instant-siezing blob of soap volcano.

Use a dull knife to break chunks off and weigh them. Then, put the whole thing in the microwave until it starts to melt. I usually get it warm enough so it half melts, then just let it keep melting on its own from there. 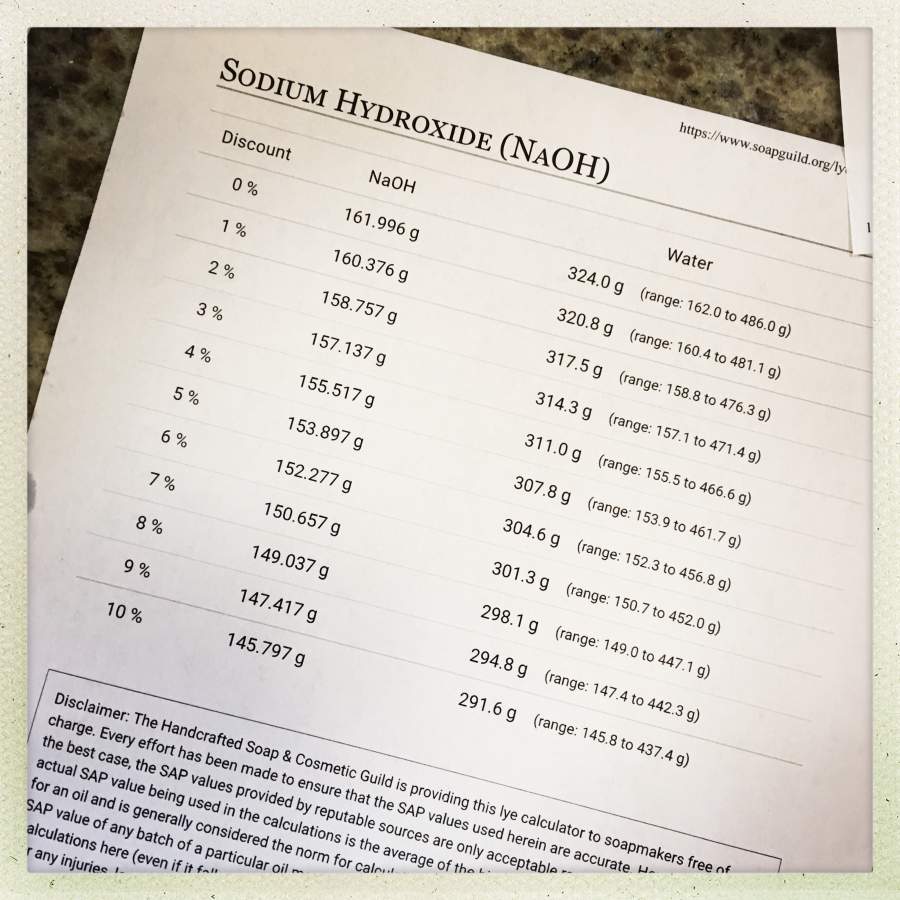 This does not have to be super precise. But go ahead and be super precise – it’s good practice. Now, here’s a trick that I use: I pour the lye and then depending on how much I wind up with (those are pretty fine amounts of lye to be measuring) that’s the water amount to use. Then, I go up two on the water chart. So if I read 155gr of lye, the chart says I need 311g of water but I use 317g. That slightly slows down the soap’s setting up, and keeps it runnier, which is good if you are molding the soap like I do. 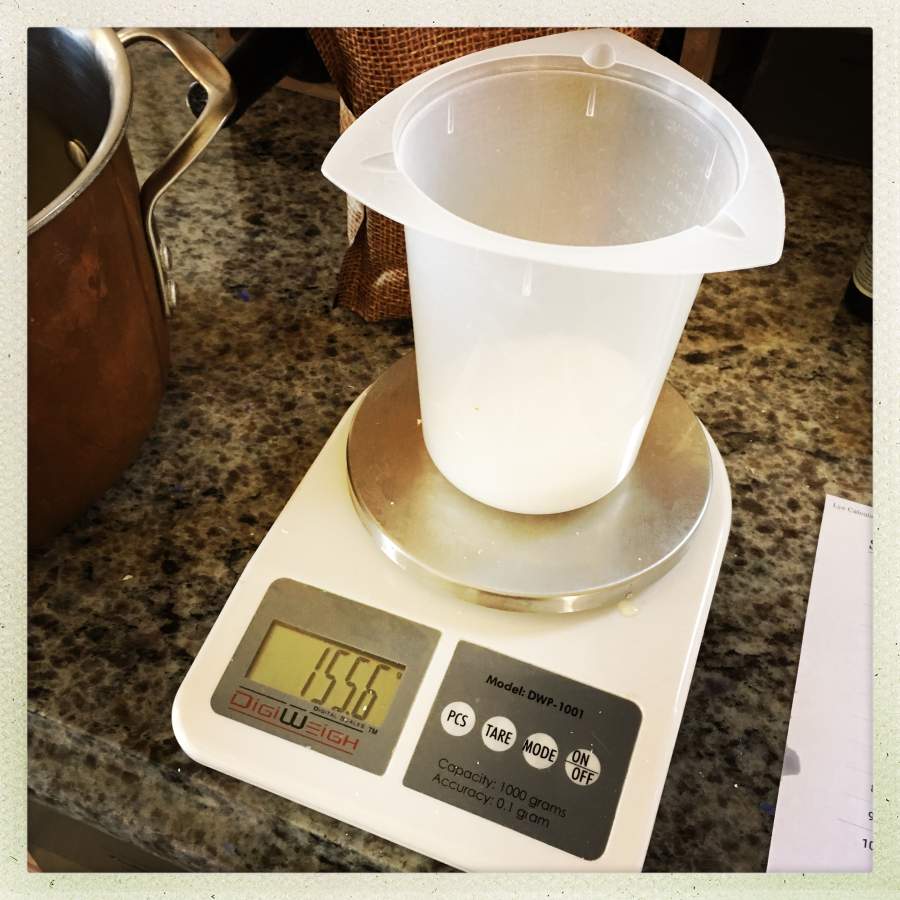 While the cocoa butter is melting, you measure out the lye. 155g – that means 317 or so grams of water. I just hit the “tare” button on the scale and add 317cc of water with a graduate cylinder I keep in my kitchen. Then I mix it up with a stainless steel spoon and put it in my sink with some cool water to bring the temperature down. When you mix water and granulated lye it gets pretty hot pretty fast! 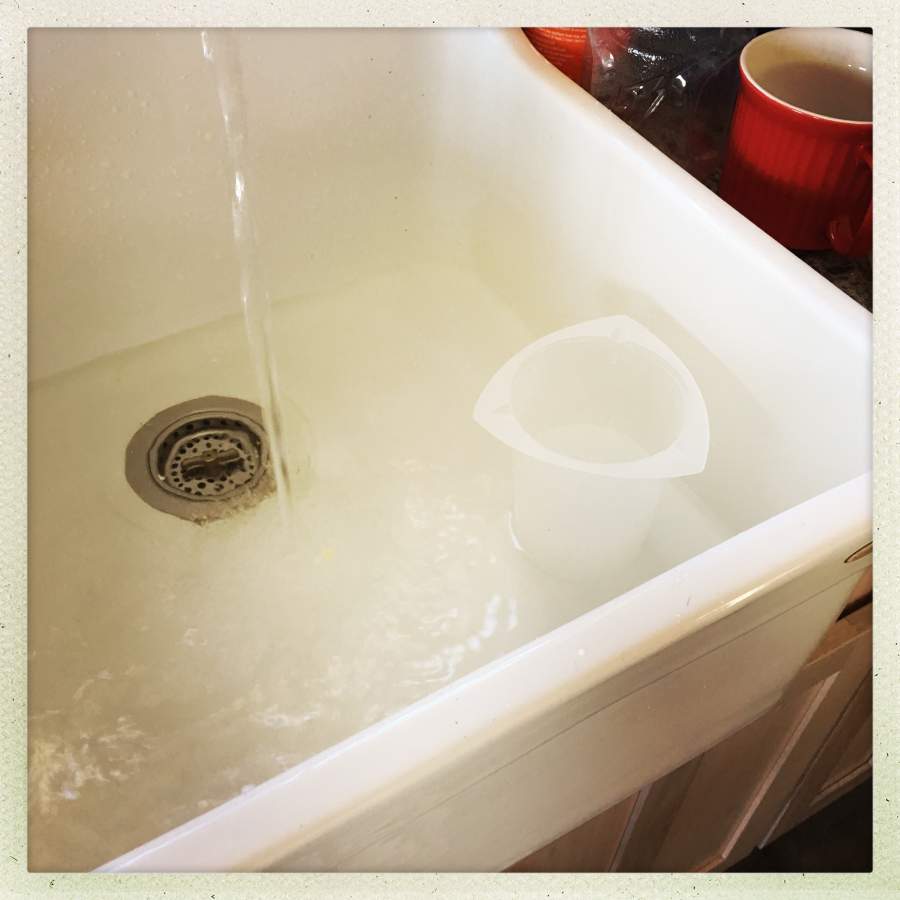 While the lye is cooling, finish measuring out your oils and lay out your other ingredients and your molds. 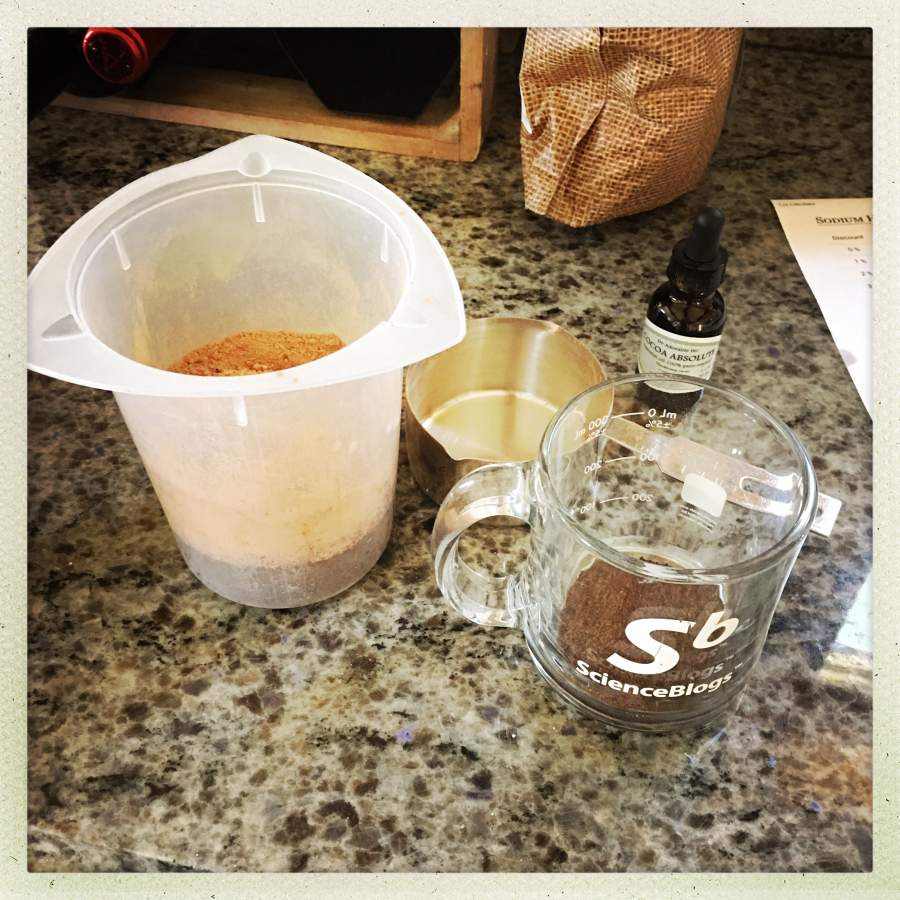 You want to have a cup of freshly ground coffee beans (unused) ground normally. This is “exfoliant”! Think how excited the GOOP! people would be if they had an idea this good.

You also want a cup of raw cocoa powder. I get the big bags of fair trade cocoa powder on ebay – this is not the stuff for fancy hot chocolates, it’s brown and smells great and thickens your soap wonderfully, though. If you have cocoa (theobroma) essential oil a few drops of that are good, too! Set that aside. 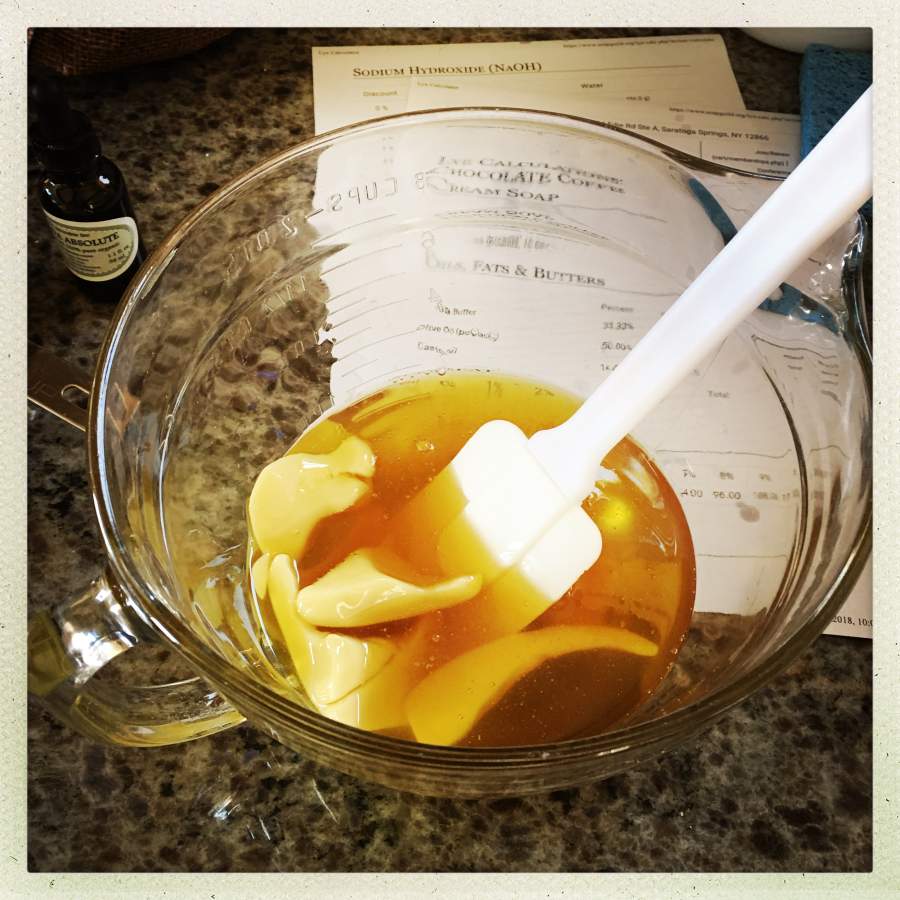 At this point the cocoa butter is pretty warm and it’ll just keep melting on its own. Pretty isn’t it? It smells amazing. Which is what gave me the idea for this soap. 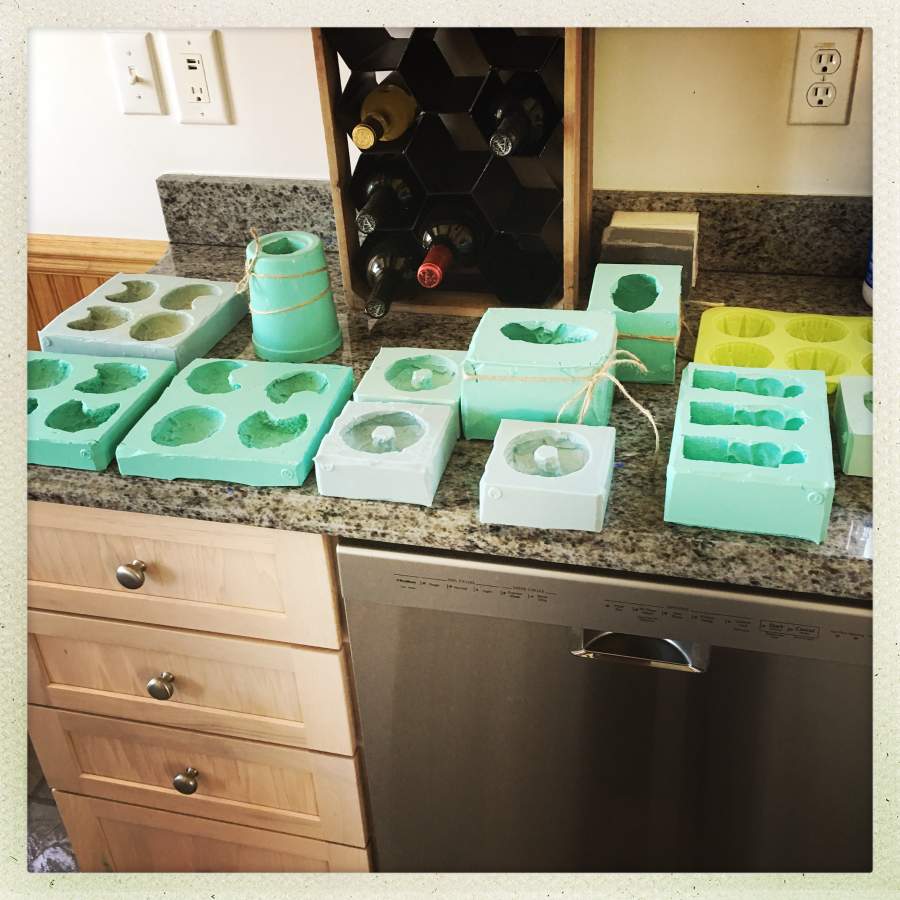 Lay out your molds. When you are pouring the soap it may start to gel and you will not have time to run around getting your molds ready. I usually put out a few more molds than I will possibly use – that way, if somehow I wind up with too much soap, I have places to put it. The big mold in the middle is a favorite: it’s a huge skull. Skull soap is great. That mold also uses a lot of soap. Keep a variety of sizes – if I had just a bit left over, I’d make a bundt cake soap. 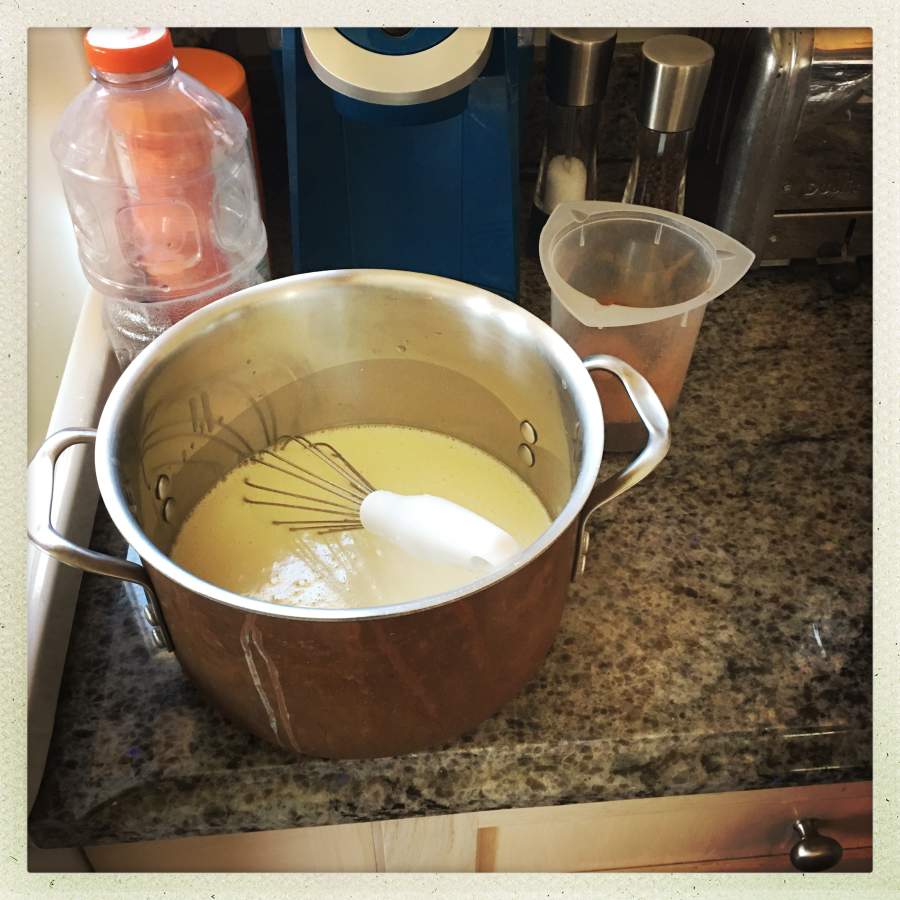 I whisk together the olive oil, cocoa butter, and castor oil. Then I check the temperature of the lye and if it’s about body temperature, I just stir it into the oil. That is it. That is the mysterious “soap making process.” You can do this. 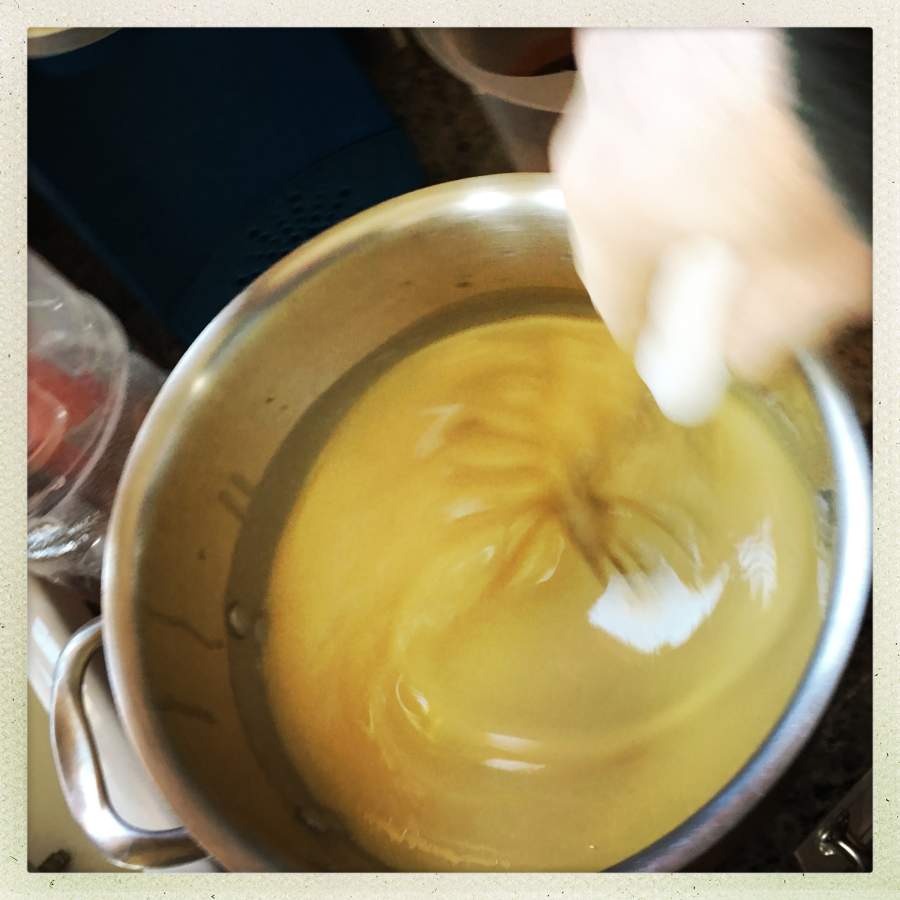 As soon as the lye goes into the oils it starts to change the way they behave. It’s very interesting. This is not ‘saponified’ yet, but it’s starting to change the oils. When the oil starts to make thicker ripples – see the wave at the bottom? Then it’s probably mixed enough. Now is when you add your scents and anything else that’s going in there.

There are 2 reasons why you add that last: 1) sometimes it speeds the reaction dramatically and your soap turns into a block in the pan. Ta da! You are done! Cut it into chunks with a knife, let it cure a week or two, and tell yourself “I planned that.” Also 2) cocoa powder is slightly basic, coffee grounds are slightly acidic, lye is more than slightly basic. I want the lye to be mostly on its way to reacting with the oils before I add these unknowns to it and maybe make my soap never saponify. 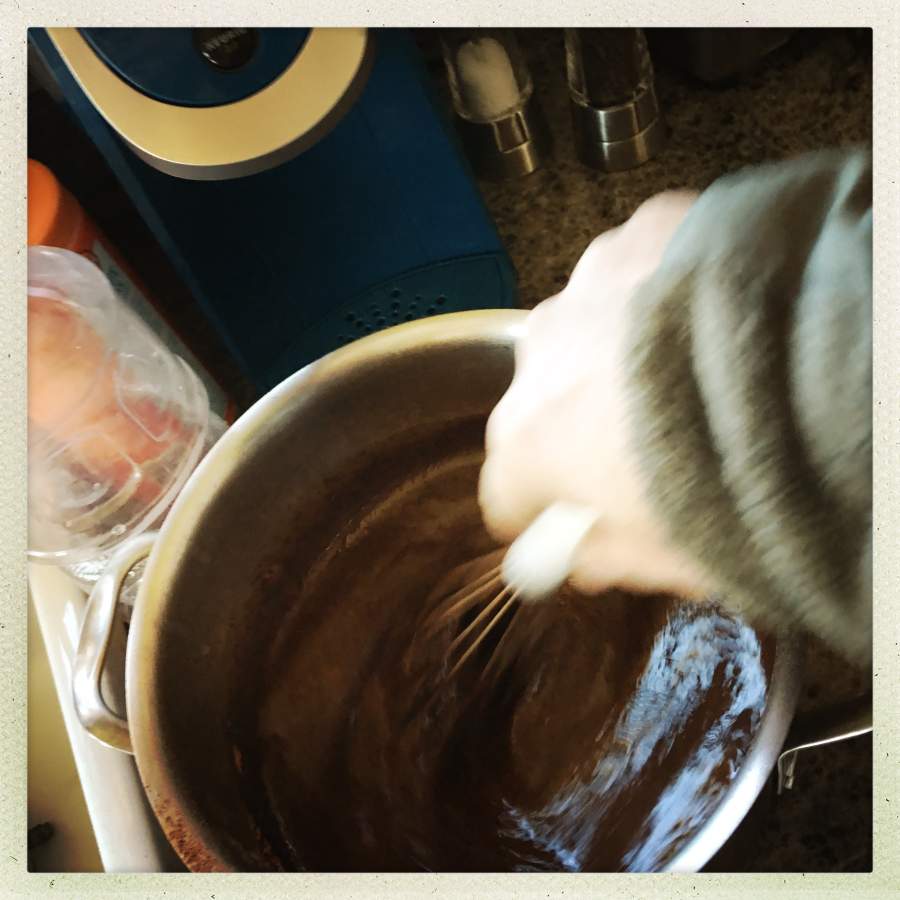 I just dump the cocoa powder and coffee grounds in and whomp them up pretty fast. If the soap congeals, we’re done. So I want to get the mix going while I can. Doesn’t it look like brownies? It smells like brownies too! Do not eat these brownies because the lye is not fully reacted and it’ll burn your mouth. 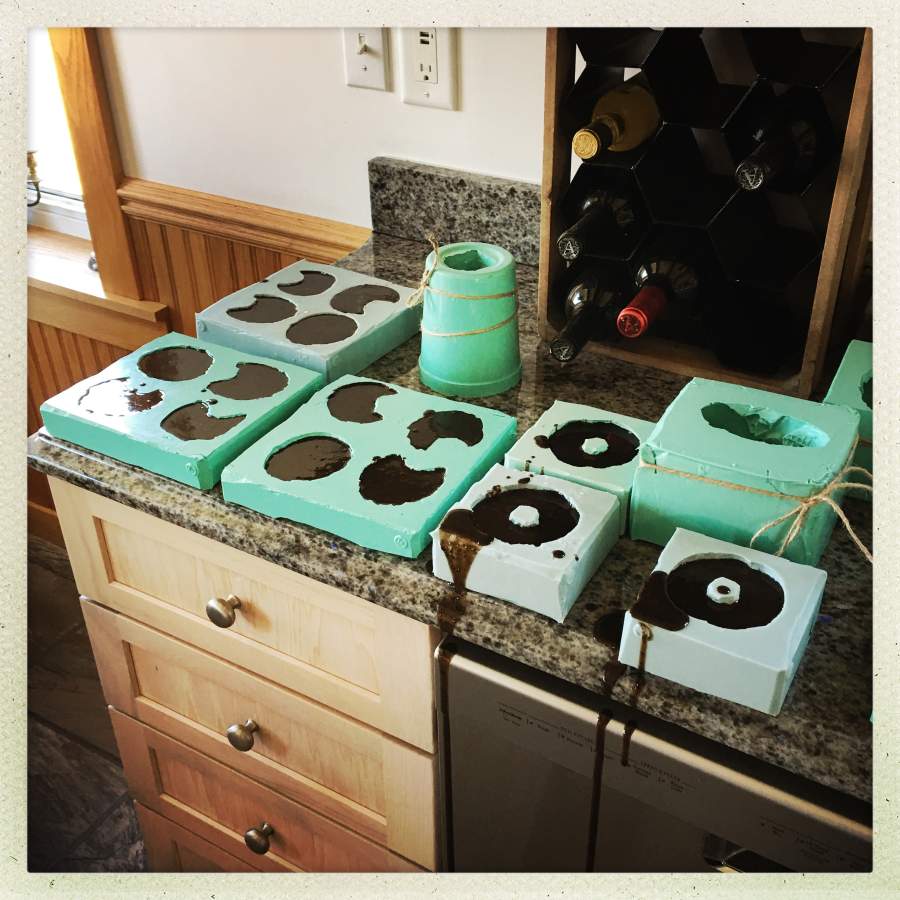 The oils and lye will continue reacting for a couple days. After a couple days you can take a small bite of the soap and if it doesn’t burn your mouth, it’s fine. That’s how I do it. I used to use phenolpthalein but I couldn’t even spell it so I switched to the bite test.

In about 4 days the soap will be ready to demold. Since I am using silicone rubber molds, I need to allow time for moisture to come out the open area – the smaller the area, the longer I allow. That’s why most of my molds are half-molds.

To keep the mice out of it, I put the molds in the oven with the door open a crack so the oven interior light comes on and pulls air through as it warms it. It doesn’t take much. My experience with this soap is that if I leave it on the counter, the mice will tunnel face-first right into it – it smells that good, I understand why.

Other notes: chocolate contains vanillin in it, which stains most soaps brown. In this case, that’s not a problem, but it means that when I am done this batch I am going to carefully wash all the molds with soap and hot water, then check to make sure there are no little bits of chocolate soap left to stain my next batch.

This recipe looks and smells incredible and it’s great soap. Because the cocoa powder buffers the base of the lye, it’s very forgiving (basically it mostly stops reacting when you add the coffee grounds and cocoa) – in spite of the fact that it looks and smells and washes like a million bucks, this is the easiest and most reliable soap recipe I’ve ever done. If you want to start soap-making, start here.

F-35 snark: the US has made a lot of hay over the leak of F-35 CAD diagrams and other secrets. I know a guy who was involved in the incident response on that and apparently the leak was at the Turkish plant that is responsible for building the engine components.A complex system like the F-35 developed in a technology partnership that is global and has thousands of competing interests involved – how do you even keep that secret? What does “secret” even mean when you have thousands of companies making parts for an aircraft? Back in the day when Lockheed made the SR-71, it was basically all Lockheed except for when they told Pratt and Whitney exactly what kind of engines to make. Consequently, the plane stayed secret. Building the F-35 the way they are doing, its “recipe” is about as secret as this soap recipe – I just published it to the internet.