[I apologize for not being able to locate the comment that originally led me to this news.] Some ancient Japanese swords were found where they were hidden in 760AD.

NARA – Two swords found under the Great Buddha of Todaiji Temple in the Meiji Era have been identified as sacred swords that had been missing for some 1,250 years since around 760 after Empress Komyo, the wife of Emperor Shomu, who built the Buddha, dedicated them along with other items to the temple, the temple said Monday.

The swords, decorated with gold, silver and lacquer, appear on the top of about 100 swords in the weapon list of the Kokka Chimpo Cho (book of national treasures to Todaiji) kept at the Shosoin repository at the temple. They are considered important historical materials.

The swords were discovered at the end of the Meiji Era (1868-1912) along with other items, including a silver pot near the pedestal on which the Great Buddha sits when three holes were created nearby for research purposes, and were designated together as national treasures in 1930.

Parsing the story of the Japanese swords is a bit difficult. The blades were missing for 1,250 years but were found in the 1900s. They were believed to be the swords, but have only recently identified using X-ray scans:

When researchers at the Gangoji institute for research of cultural property put the swords through an x-ray scan on Sept. 30 as part of preservation and repair work, inscriptions, hidden from the naked eye by rust, were found near the handles of the swords. The inscriptions, made by inlaying another metal into the metal of the sword, read “Yohoken” (treasure sword of light) and “Inhoken” (treasure sword of shadow). These two names come at the top of a record of 100 swords donated by Empress Komyo (701-760) to the large Buddha at Todaiji Temple. The lengths and decorations of the swords almost perfectly match the record.

The Japanese, oddly, are fairly cagy about publishing pictures of swords. I’m not sure why, but it’s difficult to find photos of various great blades. The blades in question were ancient, and well before the advent of the Japanese sword-form we have come to recognize as the “samurai sword” – they looked more like Chinese wushu swords. 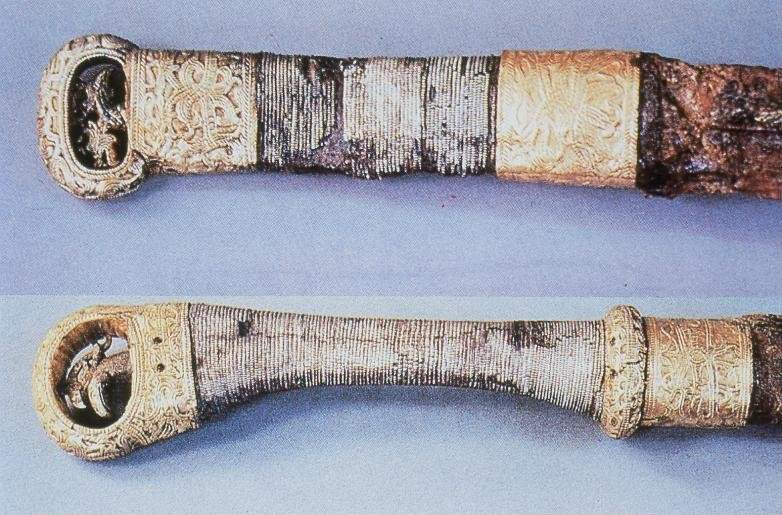 I could not find any pictures of the entire sword, and my Google-fu is pretty good.

Being buried is not good for anything made of steel, and forged layered steel decomposes into something that looks a lot like wood. I suppose that you could determine the forging process that was used, based on how it decays.

For example, this viking sword looks almost as though it had blade-facings that were a pattern-forge:

(That tang looks a bit thin – I wonder if it rusted down, or if the sword was a show-sword and most of the handle was wood with that sad little stick of steel through it)

I wonder what the smiths who worked so hard on those blades would think, to see them now? Would they be impressed simply that they have survived so long? Or would they be saddened by the rust?

In the ground, a long-buried sword doesn’t look like much: 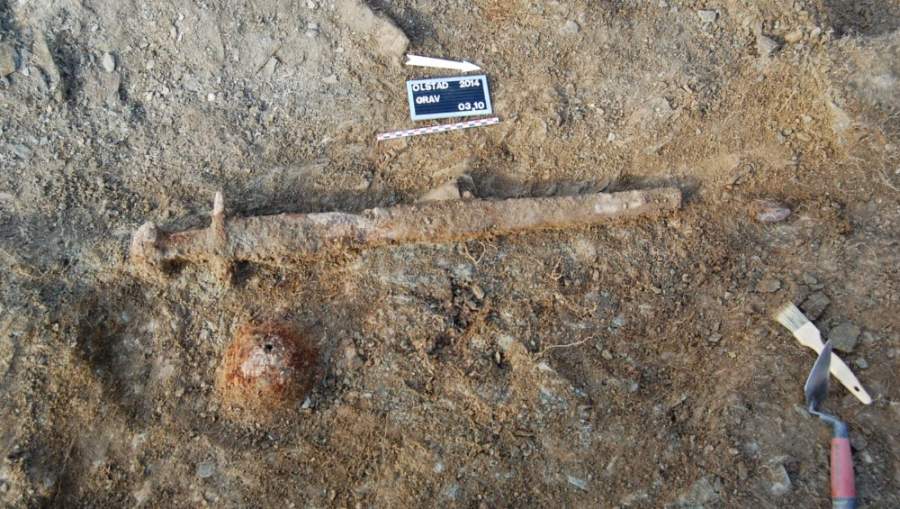 I’ve been to the viking museum in Oslo (highly recommend!) and one thing you realize pretty quickly: there are a lot of swords in the ground, all over the world. How many have been plowed up, or buried deeper or blown up, as new generations of war-machines cross the landscape?

Sometimes, a rusty old sword turns out to be a masterpiece. I always love these stories, because I like hearing that someone’s hard work was rescued. [asahi]

NARA–One of the oldest Japanese swords in existence has been recognized as a treasure at a shrine here after being found in an attic decades ago.

When the rusty sword was cleaned and sharpened, it was discovered to be from the 12th century, making it one of Japan’s most time-honored weapons, an official of Kasuga Taisha shrine announced Jan. 22.

The discovery means it is a museum piece that will be carefully studied to shed further light on the history of the Japanese sword.

That is one hell of a thing to find in your ‘attic.’ 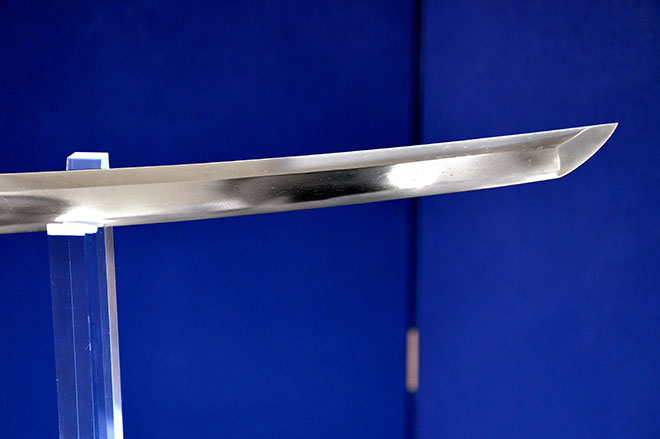 Those priests and shrines – they sure are experts at grabbing and stashing away the prime loot. 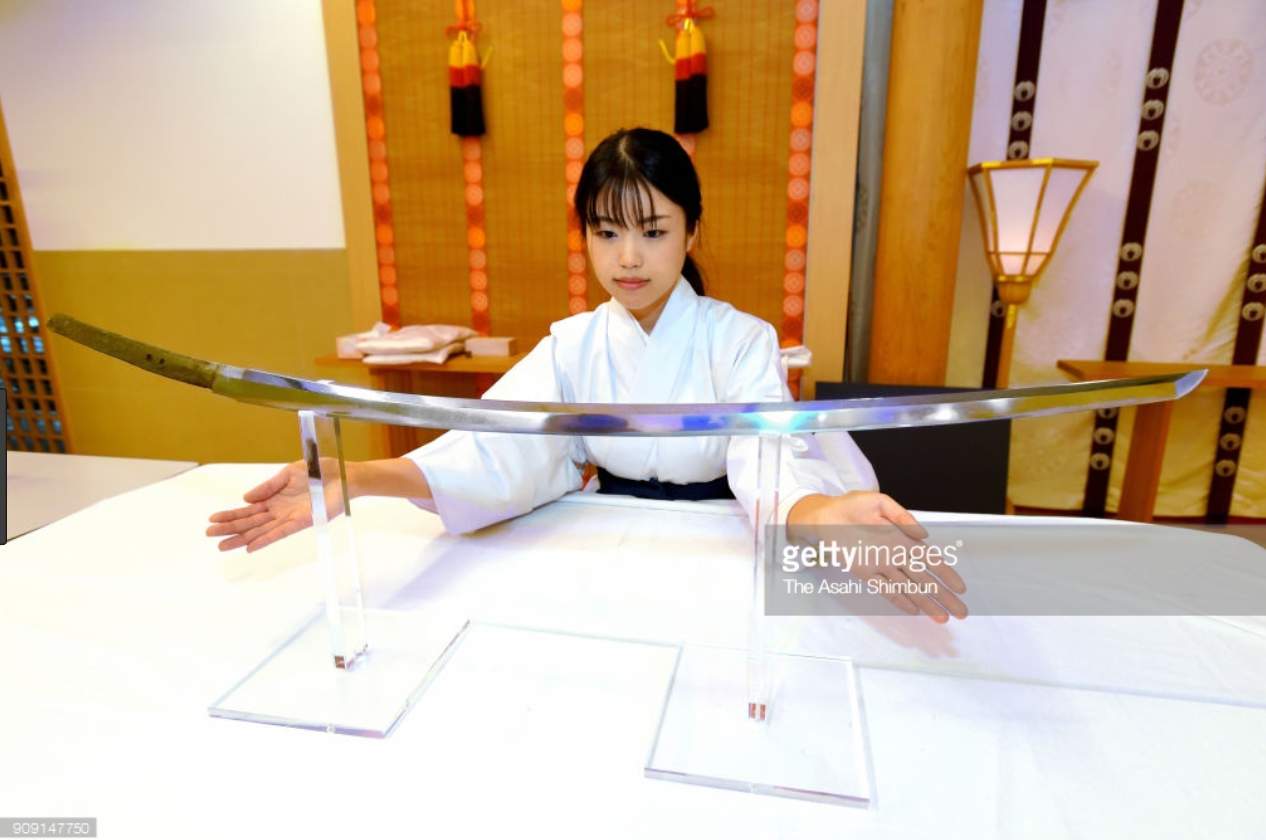 I am not sure why they posed the sword with the young woman, who appears to be tiny because of where the camera is focused and the length of the lens that was used.

12th century. It sure cleaned up nicely.

I once talked with a professional Japanese sword appraiser, who told me something interesting about Japanese arms and armor: “The Japanese make more antique arms and armor today, than they ever did during the warring states period.” That’s probably not true, but it’s a good way of putting it. We should be fairly skeptical of mystical valuable swords that just crop up one day, being handed out by strange women lying in ponds.

By the way, I always wanted to do a variant of Excalibur in which Arthur, who is a bit of a nerd and an engineer, finds a sword sticking out of a stone and removes it, sprays it down with WD-40, puts it back, and walks off.

Yes, I know, WD-40 isn’t the right thing. But I’m pretty sure their product placement department would pay out the nose for a plug like that.

I guess that telling people where you’re hiding something kind of defeats the point of hiding it. But, seriously, history is full of stories of important things that were hidden and lost. It seems there needs to be a repository for long-lost secrets, somehow. Besides: treasure maps!

The Cops Have Not Always Been This Bad » « FailDay