So far, everything I have tried to do, today, has failed. Everything. I’m afraid to even try to boil an egg for lunch.

First, I tempered some blades. I was worried that I had ground them too thin in the process of grinding the scale out, and I was right. Watching the pros do it, I catch myself thinking “that’s awfully thick” and I need to switch to “that’s awfully thin” apparently. Because the blades were thin and bi-metal, they bent a bit when quenched. That’s also normal. Unfortunately, the quench had over-hardened the steel and the tip popped right off, with just a slight nudge. 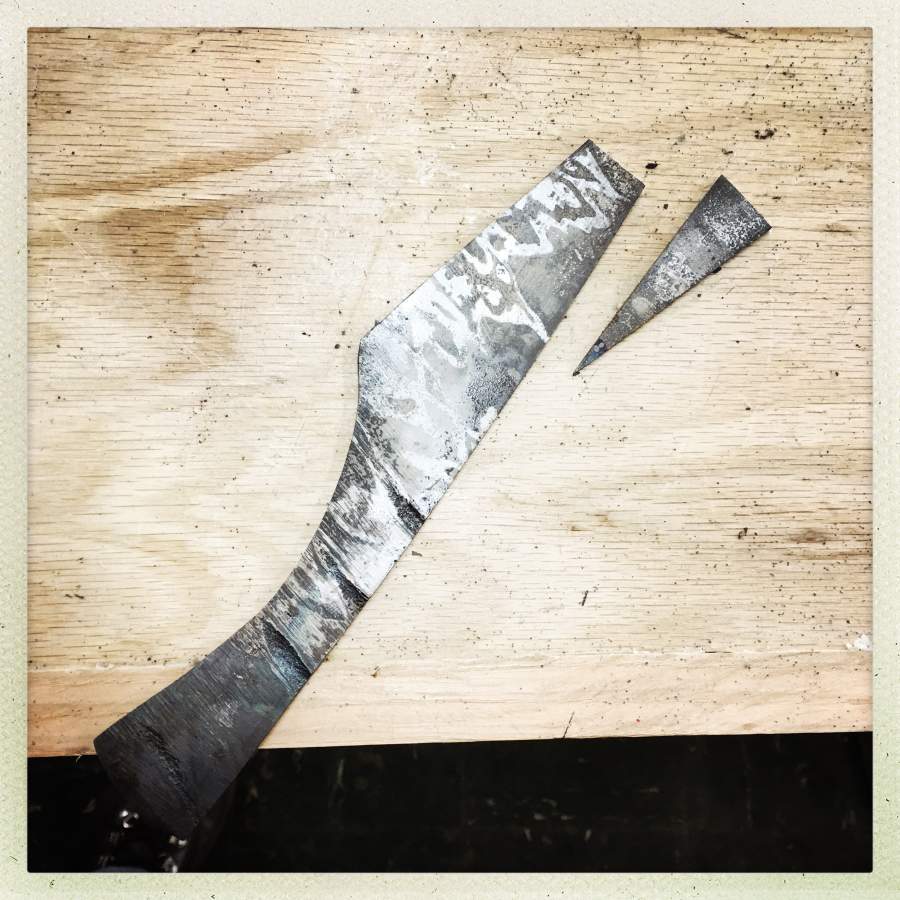 That was more than a bit demoralizing. I’ll try again, of course – but not today.

I quenched the blades while the forge was coming up to heat so I could try welding and splitting a billet. That’s for a technique called “feather damascus” that I am pursuing (though currently failing) – for an example of how it’s done right, see [Kevin Casey] Anyhow, I charged right in and stacked and welded my blocks, hammer-set them, and squished them with a vertical cutting die in my press. The vertical cutting die” consists of a wood-splitter chisel with the top cut off, welded to the die-plate.

What happened then was: 1) my welds popped open (bad!) and 2) the chopper get stuck in the billet. Oops. #Awkward. Then comes that interesting time when you sit there with your hammer, trying to apply gentle persuasion – the only kind you have with a hammer – and it stubbornly refuses to let go. 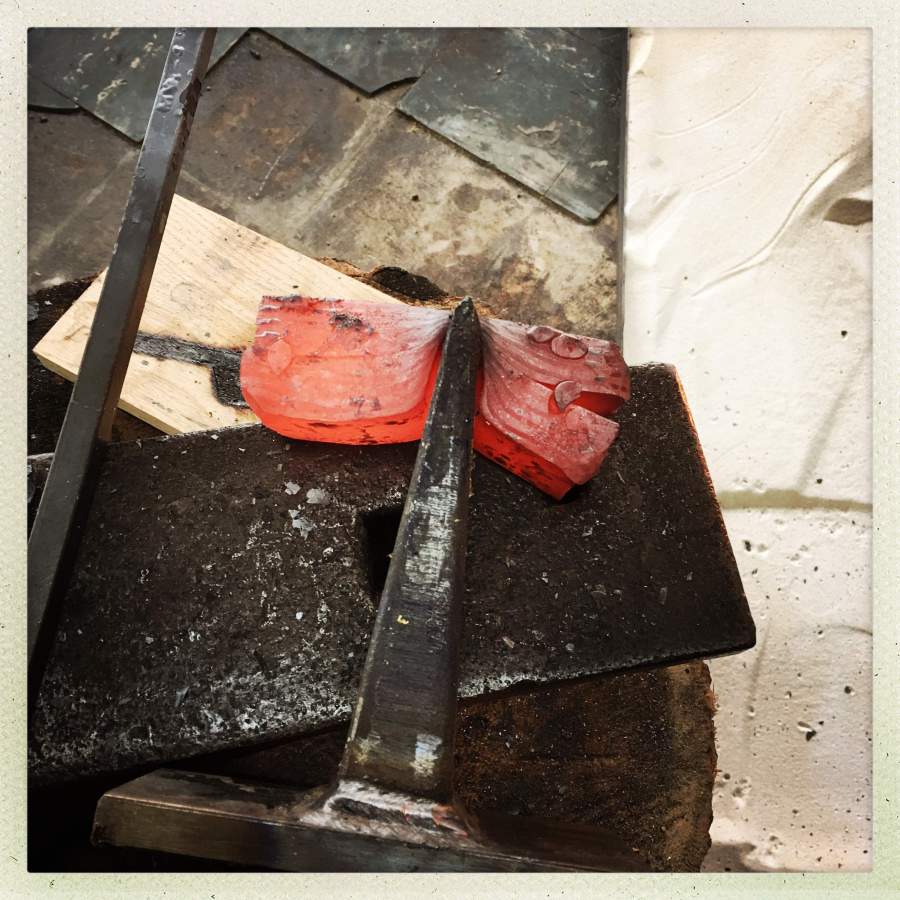 Eventually I got it off by using a cutoff wheel on the back of the assembled mass, and it came apart. Somehow in all that process, the edge of the wedge turned into paste. 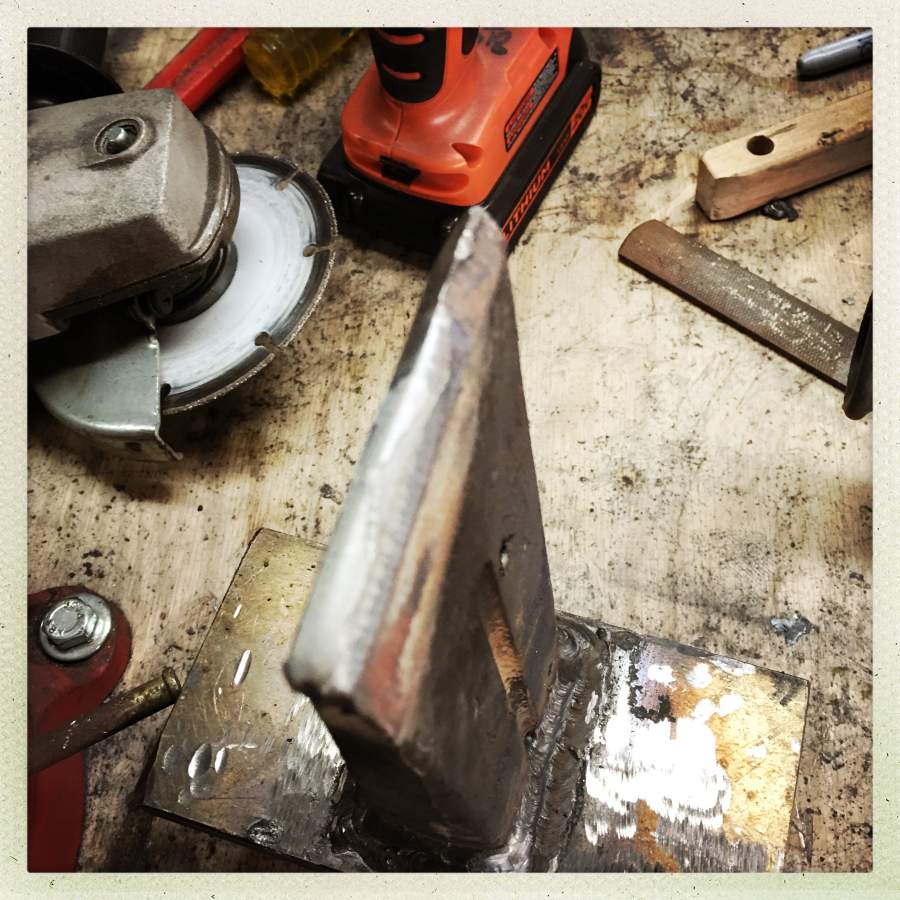 These are not intended to be one-shot disposables. It’s wrecked. OK, but I don’t know why it wrecked and how to keep it from wrecking again. I suspect that the wedge needs to be polished so it’s not as sticky, and probably made of some other kind of steel that won’t turn to mush. Meanwhile, I have a die with a piece of junk welded to it.

So I decided to make myself feel better by going to the fabricators to pick up the experimental pieces I had them do on the water-jet cutter. There was more fail there, too. It turned out as I had feared  the kerf on the water-jet was not tight enough for my design (or: my design was too tight) and the pieces not only fit loosely, there are pieces that were cut though, and fell out. 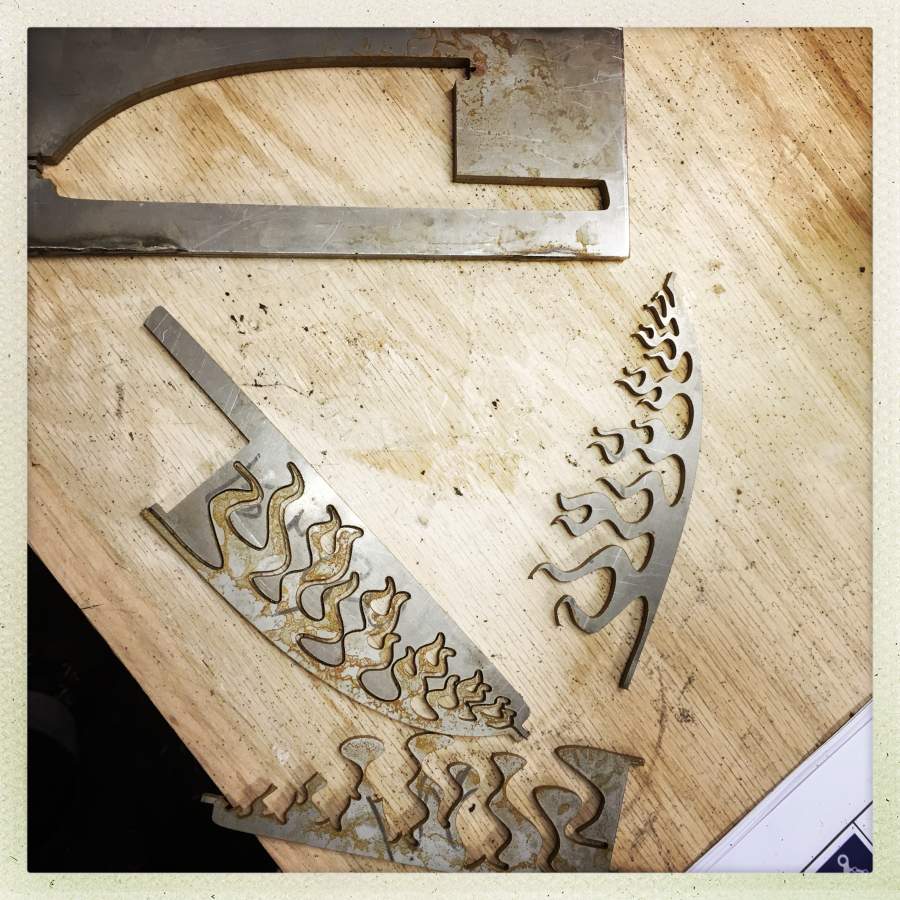 The little spuds at the head and tail are so I can tack-weld the pieces into position. My idea was to forge-weld the inserts into the edges and then draw the edge out with the hammer a bit, and I’d wind up with a knife with hot rod flames along the edge. Clearly, that’s not going to work (there are holes in the edge!) and I need to re-think the whole idea.

Meanwhile, I had another billet coming up to temperature so that I could weld it, except that when I whapped it the tack-welds broke and the yellow-hot piece of metal slid apart into two pieces, one of which fell and wound up on the side of my anvil-log. No big deal, it’s just some scorching and whatnot, but the billet’s not going to weld up cleanly into a nice big mass of steel. 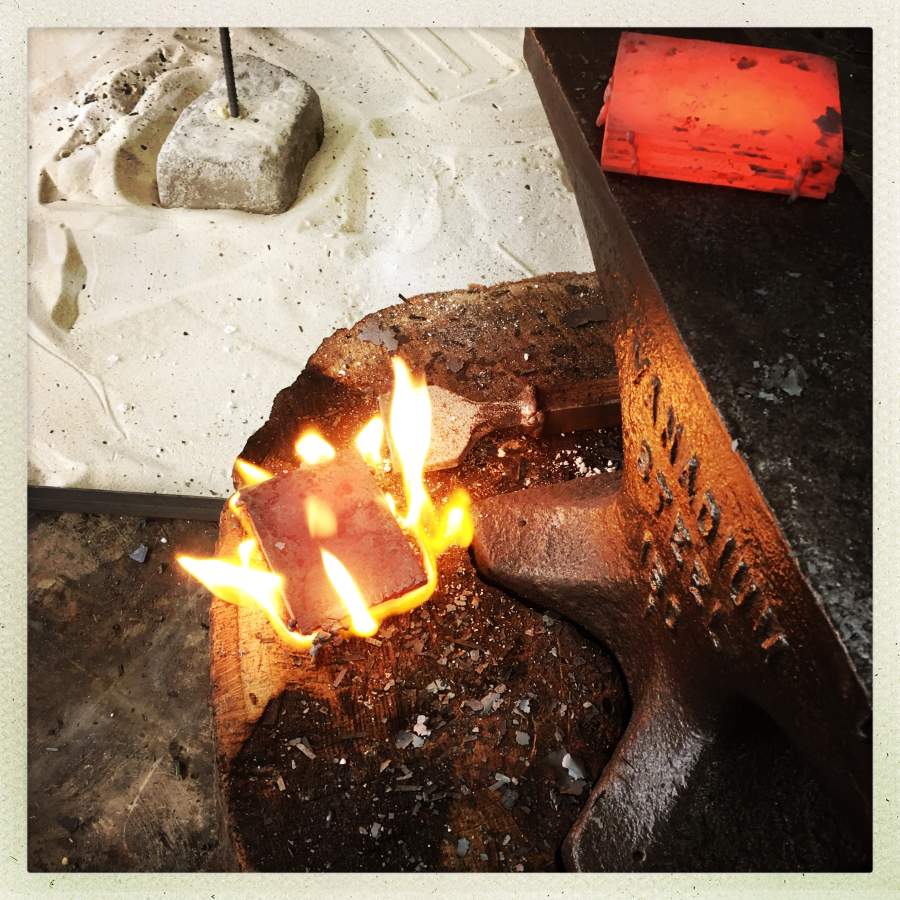 I suppose eventually I’ll see what happens if I drop a big thermal mass into the sand tray. Glass? (Glass happens at a balmy 1700F and that block was close to 2300F when I dropped it) Observe how the chunk that is on the anvil is rapidly cooling as its heat transmits to the anvil. Everything is going to hell. Around that time, I grabbed my tongs and – because my glove had gotten a bit damp – steam-poached my left index finger. Just a bit; it’ll be fine, but, ow.

There are other things that went wrong: I decided I’d shut down the forge and do some light wood-work but I wound up screwing up the piece of wood I was working on.

Then there’s another failure: the fish knife. I did a small bar with some simple layering and gave the fabricators a shot at cutting the blade outline on the water-jet. I wanted to see if it was going to be a cost-effective way of turning scale-covered bars into grind-worthy blanks. It came out pretty good-looking: 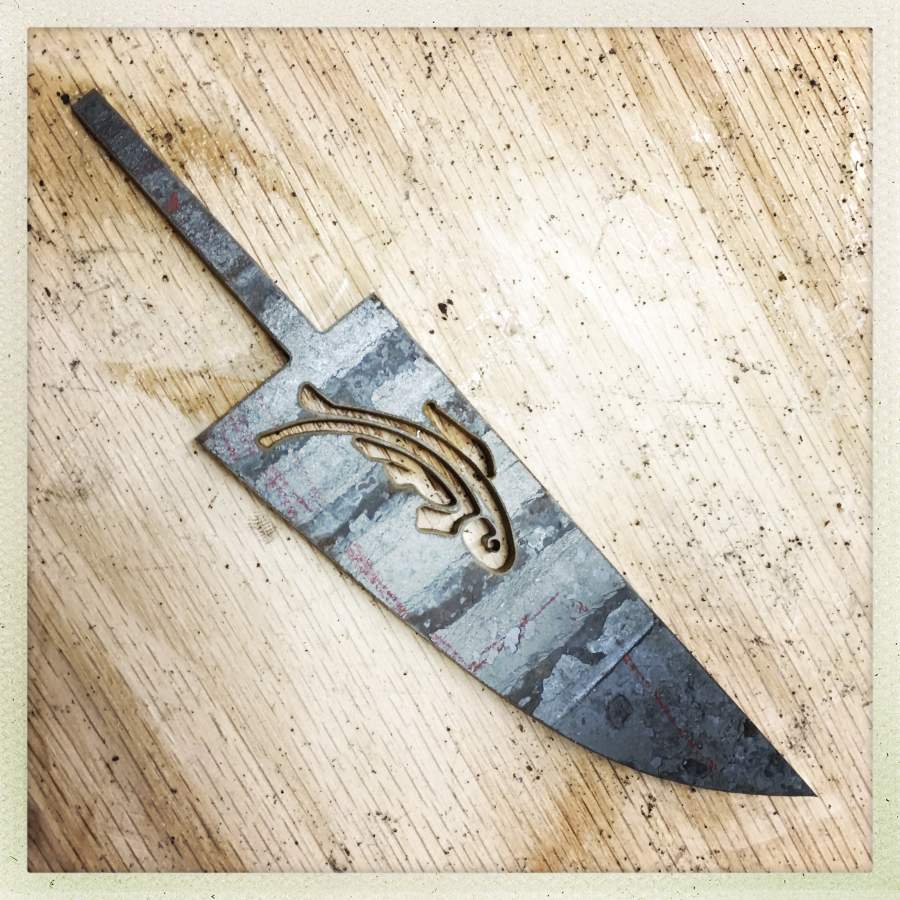 The experiment there was to see how well the water-jet could cut the blade without damaging it with heat. That’s pretty cool; I am going to keep that as a useful trick up my sleeve and maybe someday I’ll do some more open-work blade designs. Where’s the failure? 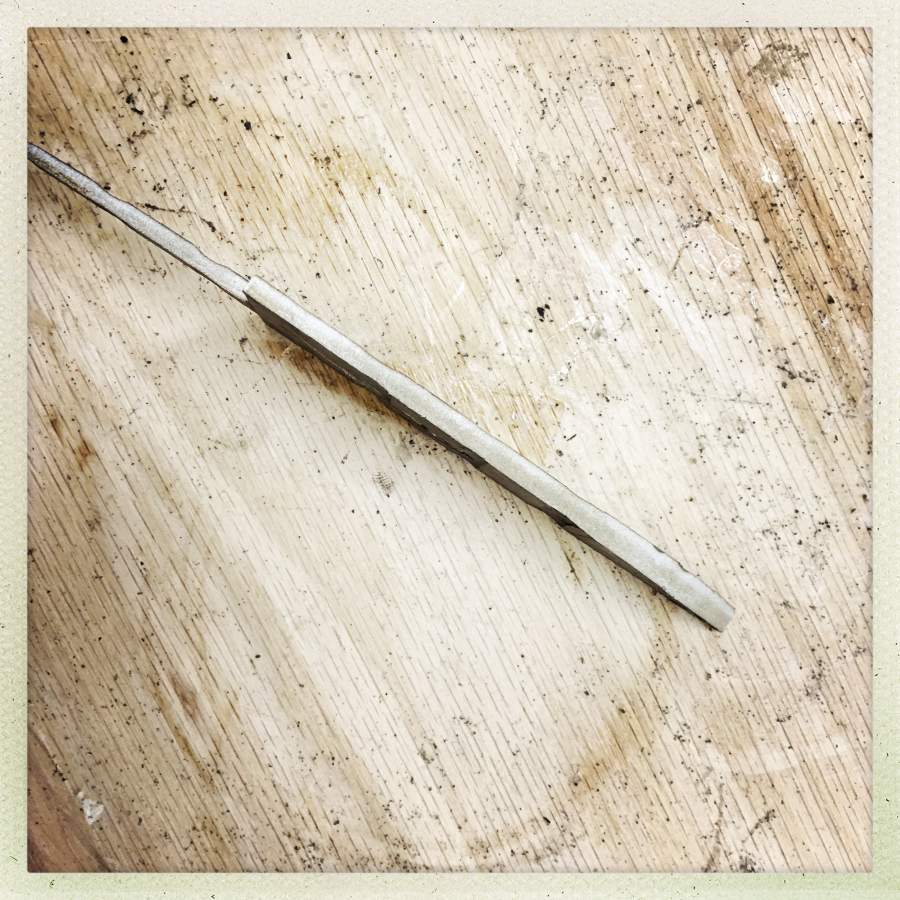 The guys with the water-jet cut the blade out of the bar from the wrong end. I had it marked on the bar, but oh, well. This one may not be a total loss – I may just thin it a bit and quench it and see how it comes out. That bar is a simple 3-piece: 15n20 on either side of a piece of 1095.

At that point, I decided to sneak carefully home (so as not to hit anything with my car) and hide under the covers.

Operational note: I am currently producing abalone refrigerator magnets. It takes about 2 days of clock time and 2 minutes of work to produce them, so it’s a slow queue. Several of you have sent me mailing addresses and I’ll be sending you magnets when I have enough of them done. I have also decided that if I am going to send people stuff, I should make a batch of soap, too. So I will be doing a walkthrough of how to make my incredible chocolate fudge cream soap. (Anyone allergic to cocoa or coffee?) I’ll do a walkthrough of that, and include the recipe, but now I am waiting for some more olive oil for the soap, another couple days. Projects, to me, always seem like a lot of “wait, wait, wait, get parts, wait, gather parts, make something.” It’s rare that I have a day where I feel I have all the parts to really charge into something, and it’s a really nasty feeling when I do that and fail hard.

When You Hide Something, Remember Where You Hid It » « I Have Ninjas