Administrative note: I made an error attributing the movie and confused a different movie with a release of the same film under a different name. Explanation is [here] – in order to reduce confusion, I have done an edit-pass. If you see comments about how I am talking about the wrong movie, they are correct with respect to the initial version of this posting. Sorry about the confusion!

I don’t know if I have the necessary skill to convey how upsetting this topic is. I wish I could borrow the skills of Orpheus from somewhere, and get other people to watch it, get angry and scared, and – do something. I don’t even know what we can do, trapped as we are in the reality of nationalism and out-of-control militarism.

Threads is about the horrible deaths our political leaders have prepared for us.

If you don’t like spoilers, don’t read any further. But there’s really nothing to spoil. You already know roughly what happens.

In 1984 Mick Jackson directed a movie called Threads[imdb] – a docu-drama about the residents of Sheffield, England, and what they experience during a full-up nuclear exchange. It is not in the slightest bit entertaining. It starts off foreboding then gets worse, and worse, and unbelievably worse, then incredibly, deeply, horribly worse. At the end, where some directors might have tried to hook in a redeeming note, Jackson swerves sharply and makes things still worse.

Because, that’s about right. The whole time I watched Threads I kept thinking of Nikita Krushchev’s threat that “the living will envy the dead.” 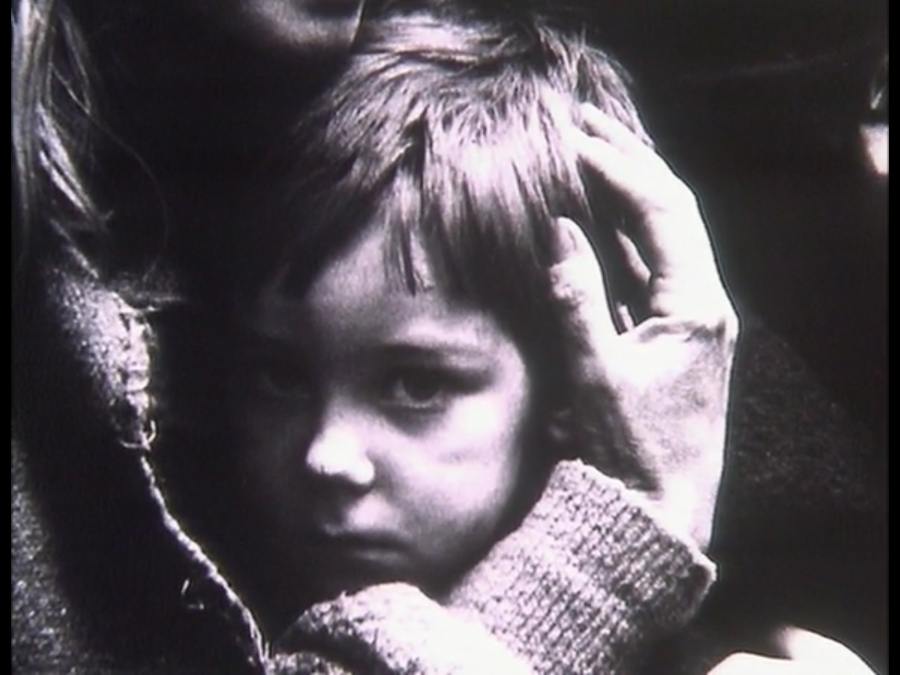 Interspersed throughout the movie are still shots that are all the more disturbing because they are beautifully done. They make me want to hammer Brian Williams in the face with a brick, for ever saying anything as stupid as “guided by the beauty of our weapons.” [wp] Fawning media totalitarian proto-fascists like Williams, who accept and glorify the necessity of nationalized violence, are the facilitators that are going to bring about this sort of disaster, if or (more likely) when humanity finally decides to pull the toilet-lever and flush all of everyone’s hopes and dreams away.

Jackson sets us up for exactly that scenario. We meet a typical pair of English kids from the 60’s: they go to the pub, they drink, they make out in the back of his Cortina, parked on a pretty bluff with an idyllic view of the city of Sheffield. Well, it doesn’t seem idyllic, at first – it looks like a typical industrial town full of people hanging on the edge of working too hard, drinking their desperation away. The movie gets rolling slowly, and – did I mention? – it gets worse. Naturally, the girl gets pregnant, and there are some poignant “meet the parents” and “set up an apartment” scenes. Brilliantly interwoven in the ordinary dreariness of their lives are flashes of news: the USSR has invaded Afghanistan. The US issues an ultimatum and deploys B-52 bombers and troops. There are reports of skirmishes. Life in Sheffield stumbles on, gut-shot, but not knowing it yet.

As the tension between the USSR and US, dimly glimpsed in flashes, ratchets up, the viewer begins to feel a very real and inescapable dread. I’ve seen scary movies that build tension but nothing like this, before. Perhaps the worst part is that the fragments of news could so easily match what is coming from Korea: both sides rushing troops to the area, chest-puffing, threats. Jackson’s decision to set the film in Sheffield, which is mostly uninvolved in the war, was doubtless because of the practical exigencies of movie-making and his target audience – but the sense that all of this war stuff is going on somewhere else, is brilliantly rendered in the half-heard snatches of news. I spend a lot of time trying to hear those fragments about Kurdistan, Afghanistan, Korea, Nigeria – and reading between the lines in Threads is so well done there were times that my hair literally stood up on my neck. It’s all “somewhere else”, until – wham.

We see a bit of the “preparedness” efforts of the government – the town administrator is told to begin storing medical supplies, water, gasoline, and so forth – he’s a well-meaning civil servant with no idea what is looming over him. But, then, nobody does. That’s why Watkins made the movie, after all. In the last few months the US has seen images of hundreds of thousands fleeing by car, of the traffic jams and shortages: now, imagine people trying to flee from something from which there is no place to hide. There is another movie in this vein, Miracle Mile [imdb] but somehow it becomes a disaster movie with a bit of action flick hidden in it. Threads has this methodical rhythm that somehow makes it clear that nobody is getting out of anywhere – I think a lot of that is a result of positioning the film in Sheffield, far from where anyone would expect war to come, and probably far from where anyone expected to do anything about it. 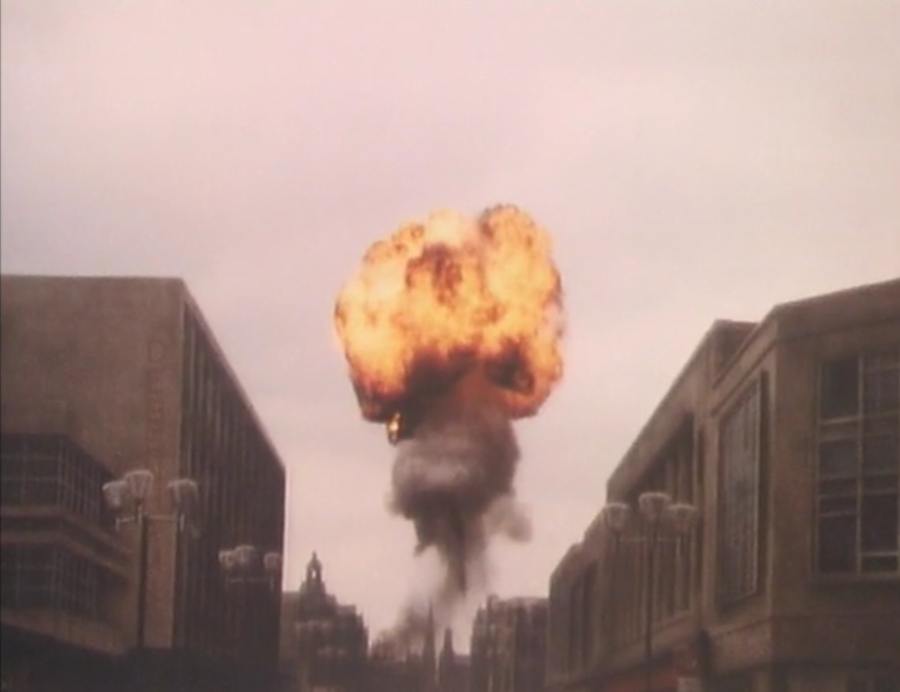 That’s one of the most powerful messages I took away from the movie (other than “the living will envy the dead”) – the vast mass of us sit in the shadow of this horrible thing our leaders have planned for us, and we feel that there is nothing we can do. Or perhaps there is nothing we should do because it’s all so far away. But they built this for us – they planned this for us – they used our money and our work to fund it, and the very worst of them talk about it as though it’s a casual game of golf. No halfway decent human being should countenance this thing for anyone.

We, the people of the world, should rise and rip our political leaders to bits for preparing this bath of fire for us.

Naturally, our political leaders have bolt-holes, where they expect they can hide and weather out the worst effects of their utter failure. Jackson doesn’t address that directly, but obliquely and powerfully shows us how that works, as well: the mostly well-meaning political leaders of Sheffield take shelter in their command center under the town’s office building, and are trapped when the building collapses over them. They die slowly and horribly. But so does everybody else. 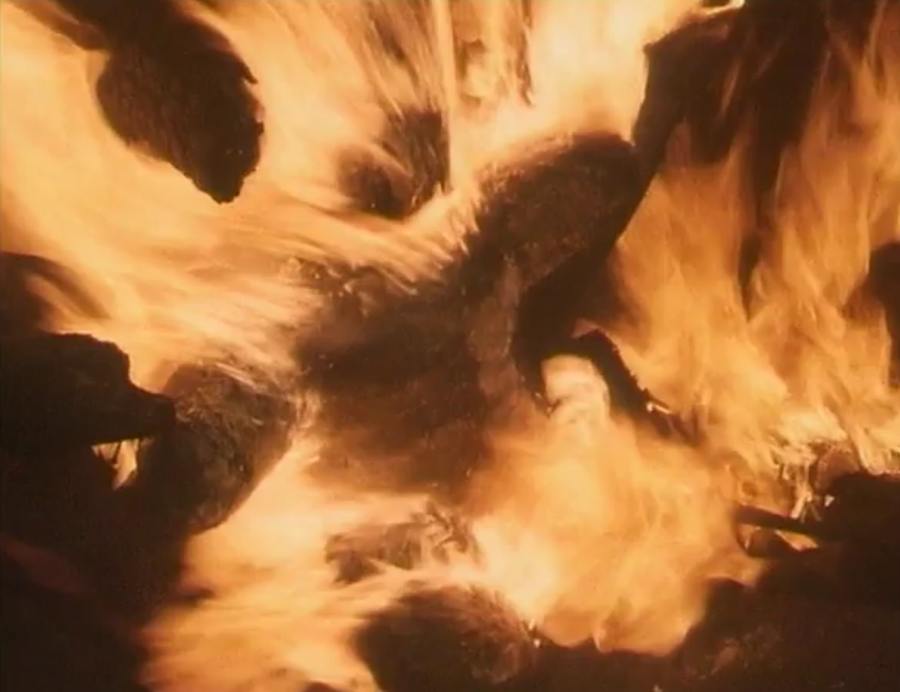 The bonfire of nationalist vanity

The story follows its little cast of characters that eventually dwindle to one, the young pregnant woman. Then, the documentary aspects begin to pop in, with freeze-screens that blandly state facts that are so scary your mind wants to crawl someplace safe instead of reading them. I imagined I had a pretty good handle on nuclear war, but there are things I hadn’t thought of, which Jackson’s researchers did. 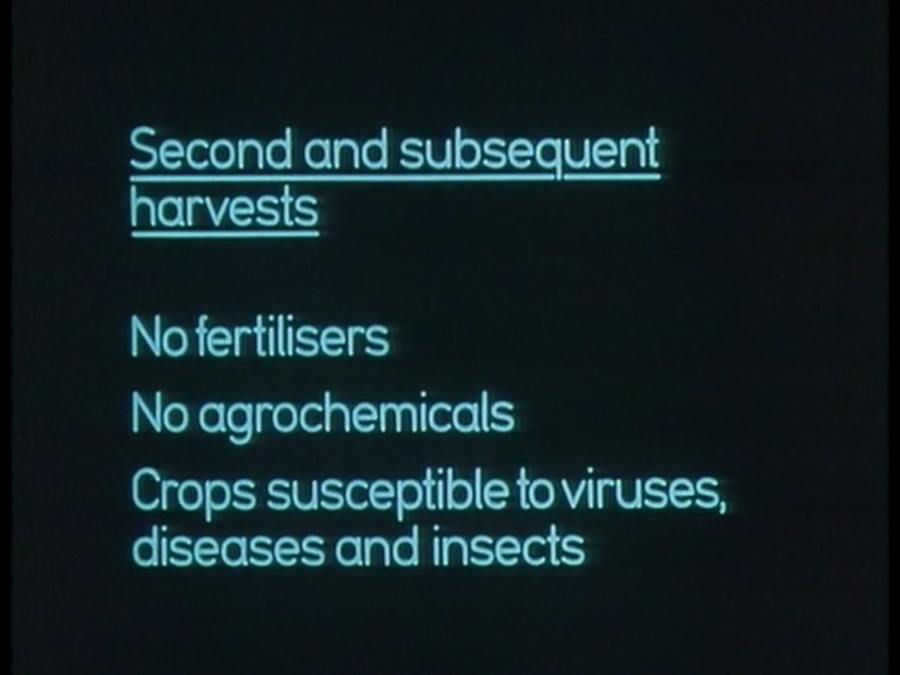 We’ve all heard of nuclear winter, but I’d never thought of the plagues of rats and flies that would follow having 20 million unburied corpses (never mind the sheep, cows, etc) or the side effect on agriculture. 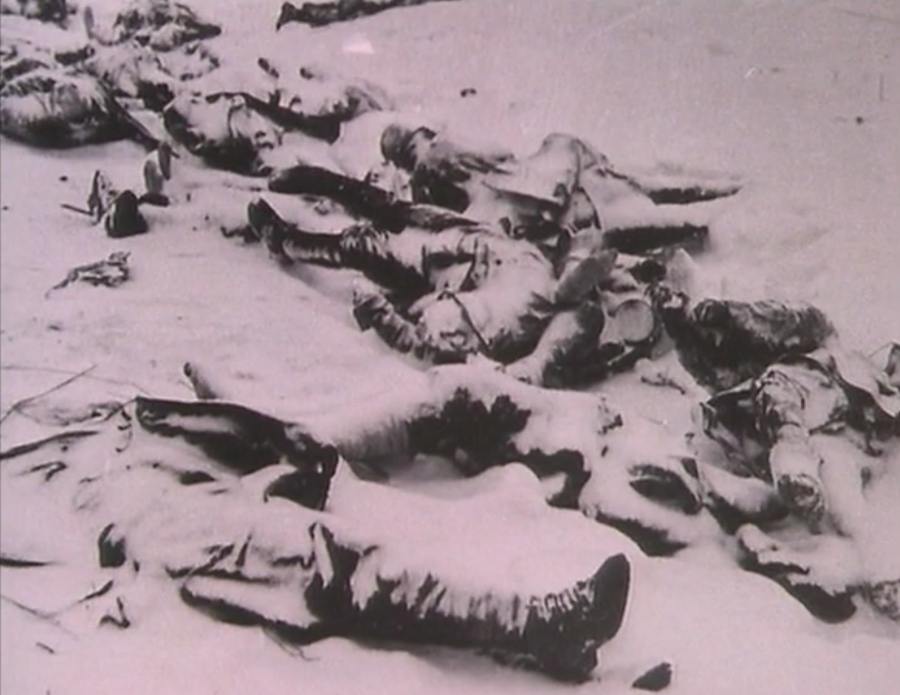 There was a report yesterday about an intensive care unit in a hospital in Puerto Rico that suffered a power failure and all the patients are now dead. In Threads we see doctors throwing up their hands in despair at the uselessness of trying to help patients who will die from radiation exposure. The medical infrastructure at Hiroshima and Nagasaki collapsed, similarly. What Watkins makes us see is that it’s not a partial collapse, like “no power or water” but a total collapse. “No nothing.” Our modern civilization is tightly integrated and god damn it we depend on each other – it’s like a Jenga tower – politicians imagine that they can just destroy part of the world without affecting the rest. 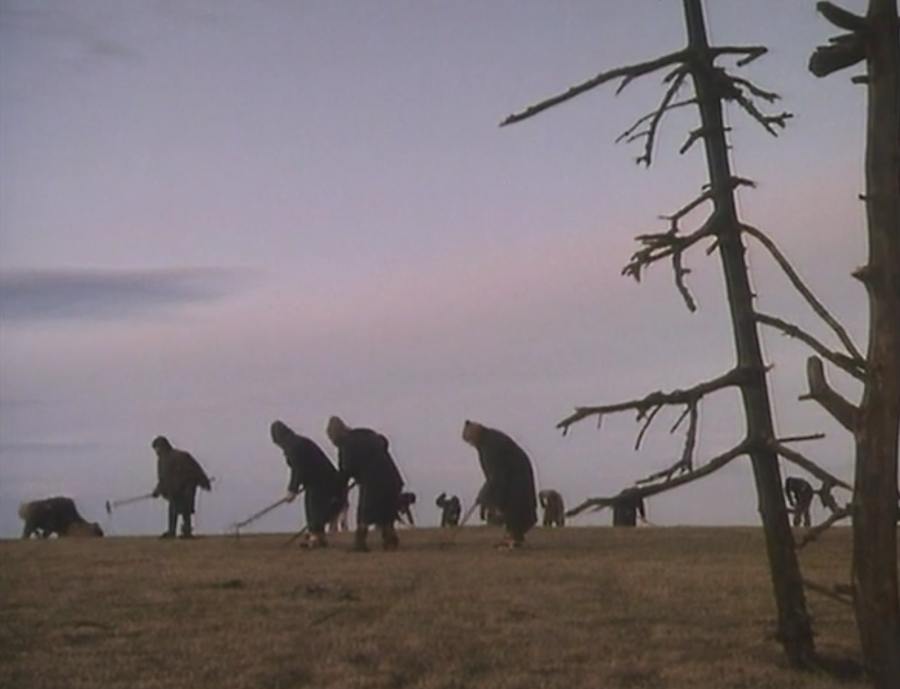 Jackson’s projections are that, after radiation and secondary die off, nuclear winter and the destruction of agriculture and supply, England would be back to medieval-level population again, 30 years after the war – about 1.2 million people. England, frankly, isn’t much of a target, so their suffering would be long-term collapse. That saying about “bombing someone back to the stone age”? It’s not funny or accurate: it’d be early iron age.

I have more in common with a typical North Korean peasant than I do with Kim Jong Un or Donald Trump or any congressman. So, do you. We are all living under the threat of this thing, built by power-loving politicians and their Renfields, in order to make themselves more important. They are the same people who talk casually about “axis of evil” when they’re actually founding members of the axis, themselves.

In the last few weeks two things have happened:

A third thing that’s happening is Donald Trump will continue funding the US’ development of new weapons – a $1.5 trillion dollar expenditure – which will almost certainly mean the US will be violating the limited test ban treaty. We need to finally acknowledge that the nuclear powers (in spite of what they said in the Non Proliferation Treaty [npt] they shoved down everyone else’s throat) never intended to do anything but achieve and maintain a monopoly. Non-nuclear states are obliged not to make or develop nuclear weapons, but the nuclear powers will continue to maintain and upgrade their arsenals. And when was the last time that the citizens of the USA or Russia had any say in whether more nuclear weapons would be developed? In other words, 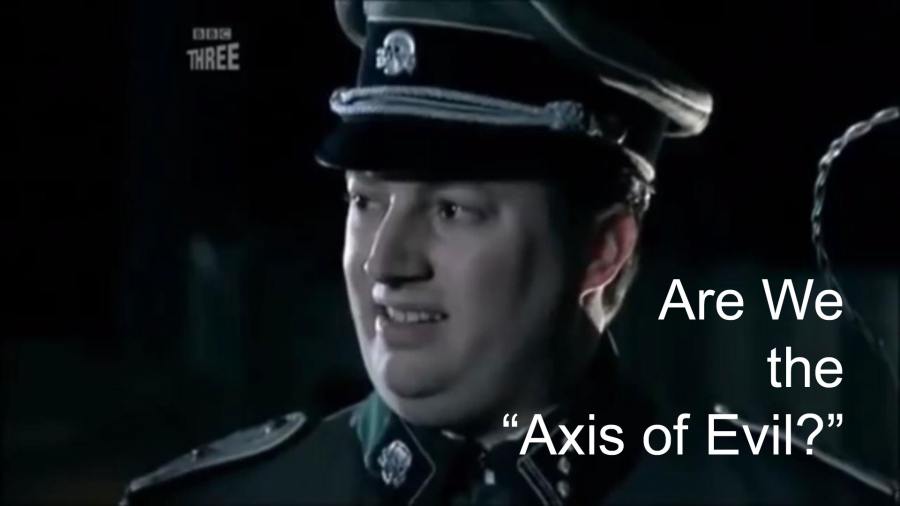 “I am not an Athenian or a Greek, but a citizen of the world.” When it comes to nuclear war, nobody is isolated.

Compared to the hostile powers our own leaders have arranged against us, any disagreement any of us might have with a citizen from another country is piffle. ISIS? They are nowhere near the threat to anyone that the commander of the US, North Korean, Russian, (on down the list) is. Sure, they are repugnant, cruel, murderers – but they are rank amateurs compared to our leaders, who are prepared to murder on a vaster scale and who, in fact, have pretty much murdered ISIS (and 50,000-100,000 noncombatants along with them) I can negotiate with ISIS – probably it wouldn’t go well, but I can try – militant nationalism doesn’t permit negotiation at all: they make us pawns in their game and they’ll throw us in the fire at any moment without feeling particularly bad about it (unless it’s bad for business).

Why can’t we rise up and put these motherfuckers up against a wall and shoot them?

[Edited] Peter Watkins [I was under the mistaken impression that Watkins directed Threads] directed Culloden [imdb] and La Commune [imdb]. I’ve seen Culloden and it’s excellent and unsettling. Imagine if a documentary film crew were present at the battle in 1746, and interviewed some of the soldiers involved, then followed their experience in the battle. Punishment Park [imdb] is a docu-drama about a hypothetical 1970s where the government cracks down on Vietnam War protesters by killing them.

“The living will envy the dead.” Krushchev may not have said that. But, he should have: [wp] he, and John Kennedy (who attributed that comment to him) were some of the monsters that helped build humanity into this corner, in service of their vanity, greed, and love of power. Threads was made in 1965, and Krushchev allegedly said that in 1963; I suspect that phrase was rolling through Watkins’ mind the whole time.

A minor clarification: I do not support nationalized violence; it is predicated on the idea that those people over there, who live within those lines on the map need to be collectively hurt or killed because of those lines on the map. I am in favor of personalized violence, when it’s defensive it can be the only effective response to aggression. I consider the political leaders who have built and who maintain the world’s military balance to be aggressors against me. I take this personally.